Contribute Now
Ad
On Sunday evening, a group of around 100 people gathered at the southern end of Cadell Road in Mumbai's Dadar neighbourhood, where the police had blocked off traffic and bystanders. They were waiting for Prime Minister Narendra Modi to lay the foundation stone of the memorial for Bhim Rao Ambedkar planned at the Indu Mill Compound nearby. The site has been the focus of Dalit agitations since at least 2003.

“We have come all this way, but they won’t even let us in,” grumbled Mahadev Sarkate, an elderly man wearing a faded blue Gandhi topi. Sarkate, 65, had reason to be annoyed. He had come all the way from Hingoli in central Maharashtra when he saw the date for the opening announced on television three days ago.

But while the opening ceremonies of the port and the Metro were largely perfunctory affairs attended by high-level functionaries, hundreds of Dalits had gathered at Dadar to see the opening, only to be turned away. Only VVIP invitees were allowed inside the Indu Mill Compound. This list included chief minister Devendra Fadnavis and Republican Party of India leader Prakash Ambedkar – but not Shiv Sena chief Uddhav Thackeray, who was reportedly not invited to the event.

Eventually, Modi came to Indu Mill, laid the foundation stone and left so soon that the group did not realise the event was over until cars began to go down the road once again. His speed irked some bystanders.

“Modiji should not have said he would open the metro rail today as well,” said a man rushing to Indu Mill's gate after the barricades were removed. “Babasaheb was not just anybody. Modiji should have given him that much respect that he would not have to leave in five minutes without even giving a speech. He could have opened the Metro tomorrow.” 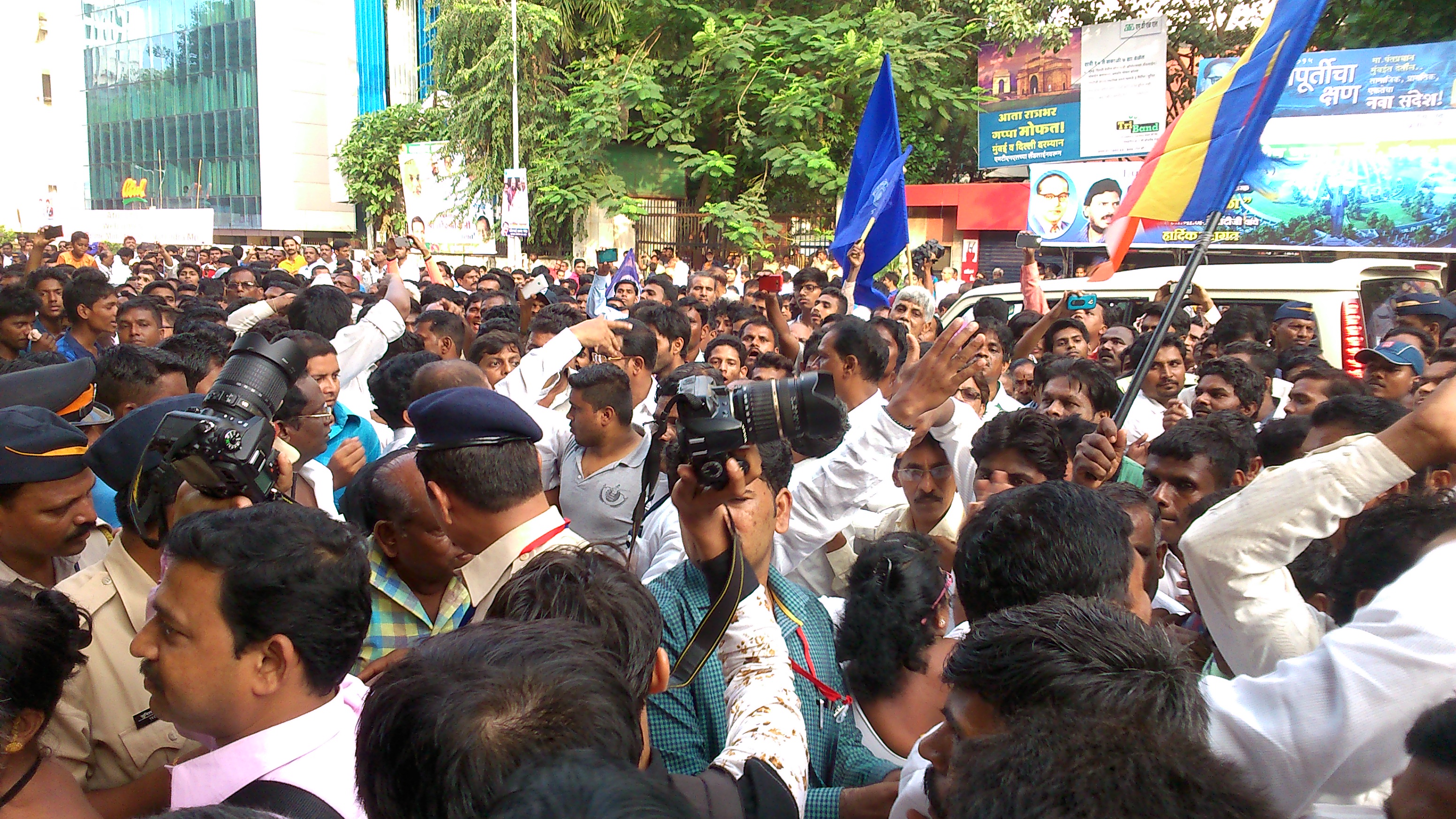 The crowd outside Indu Mill.

But at the rally he addressed at Bandra-Kurla Complex after he left Indu Mill, Modi did speak about Ambedkar.

“The world knows Martin Luther King but not Babasaheb Ambedkar,” he said. “If there had been no Ambedkar, where would Modi be?” ‒ expediently alluding to the fact that he too belongs to a group that is part of the Other Backward Classes.

Years for a memorial

Indu Mill was owned by the Sassoon family until it was nationalised and passed into the ownership of the National Textiles Corporation in 1974. The sea-facing mill is a few hundred metres down the road from Chaityabhoomi, where Ambedkar was cremated.

The state government in 2004 promised to convert the compound into a memorial to Ambedkar, but the decision remained stuck in technicalities until 2012, when it finally gave in to vociferous protests to have the memorial constructed without delay. In September, the Devendra Fadnavis-led BJP government announced that it had finalised a design that would cover nearly six acres of the 12.5 acres of the compound and would cost an estimated Rs 425 crores.

Sarkate, who is a daily wage labourer in his village in Hingoli, planned to return in a day or two. His son, with whom he was staying in Mumbai, lives in Ghatkopar in north-east Mumbai. Sarkate makes it a point to come to Mumbai every year on December 6, to mark Ambedkar's death anniversary, and April 14, to celebrate the day of his birth.

“Babasaheb Ambedkar is our god,” he said. “I left everything to come here. Once the memorial is made, I will come here also. But at least this government finally inaugurated the memorial. The Congress government did not do anything for 40 years.”

After Modi left, a large surge of people from both ends of Cadell Road pressed against barriers at the gate of the compound. The police, which at first vainly attempted to disperse the crowd, relented and parted the barricades at intervals to let in trickles of women, the more persistent men and eventually everyone else waiting at the gate.

“Indu Mill is ours now, how can they not let us enter?” asked Vinod Awatye, one of a group of exuberant young men who had come from Bhiwandi for the opening. He was one of the first to enter the compound. He laughed. “For 50 years, they never let us in. So we broke the door and came in anyway.” 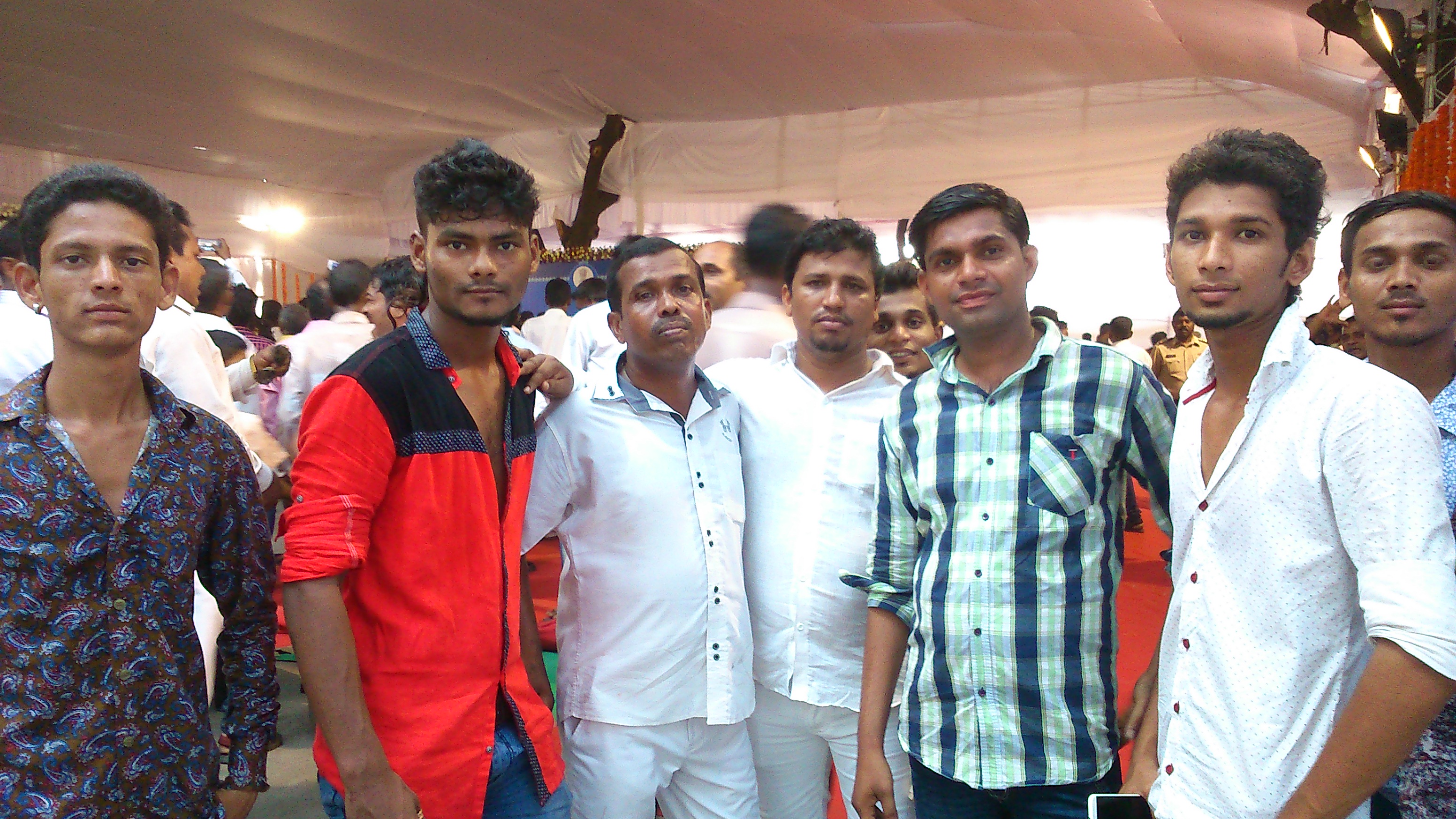 The point, for those who had stayed, was Ambedkar, not Modi. They first paid their respects to a large bust of Ambedkar, moved on to gather a handful of soil at the point where the bhumipooja was done, and then left the compound for Chaityabhoomi.

Present in large numbers were members of the Samata Sainik Dal, dressed in their characteristic white shirts and khaki pants along with vibrant blue Gandhi topis. They organised themselves into rows and demonstrated their group’s Ambedkarite salute.

“The hopes of our early days have been fulfilled,” said Arjun Muke, 67, associate president of the group’s Headquarters Committee in Mumbai. “We were there at Indu Mill [in 2011] when we came over the walls to occupy it and now we have finally got it for ourselves. But we had to steal it. Nobody in our community can get anything in any other way.”