Contribute Now
Ad
Director Hansal Mehta and screenwriter and editor Apurva Asrani have a 15-year history of collaborating on projects, from Dil Pe Mat Le Yaar (2000), for which Asrani created the promos, to films such as Chhal, Shahid and, most recently, Aligarh.

Starring Manoj Bajpayee as a lonely professor persecuted for his homosexuality and Rajkummar Rao as the journalist who interviews him, Aligarh made its international premiere at the Busan International Film Festival before travelling to the London Film Festival. The movie has been inspired by the real life story of the persecution and subsequent suicide of Aligarh Muslim University professor Shrinivas Ramchandra Siras. He was the victim of a sting operation by local television reporters, who intruded into his home and filmed his consensual dalliance with a rickshaw driver. Ahead of its Indian premiere, Mehta and Asrani, both of whom are National Award winners, discuss the emphasis on realism in their films, the complexities of exploring sexual preferences on the screen, and the need to focus on outliers.

Aligarh touches on a number of themes – privacy, loneliness, modern society, intolerance, morality and sexuality. What would you say is its central idea?
Hansal Mehta: Aligarh is about the right to choose. Siras did not want to come out in the open, but society and its intolerance and the intrusion labelled him as a gay professor. Nobody deserves to be confined to a life of loneliness for one’s choices, especially sexual choices, particularly when it’s consensual. The film is about longing, loneliness, and aging. It’s my most romantic film – poetic, gentle, without being a love story.
Apurva Asrani: Aligarh is about a yearning for privacy and for dignity. I don’t think you owe anyone an explanation about your sexuality. What transpires behind closed doors and involves consenting adults is nobody else’s business. I have rented homes for the last 18 years and I have been a respectful and a peaceful neighbour, yet I have continually faced discrimination. I have been refused a home or been thrown out for being a bachelor, for being in the film industry and for having a dog. This is just because I don’t conform to the family ideal. This script gave me the opportunity to vent that anger and to ask to be left alone.

The movie challenges stereotypes about homosexuals in Hindi cinema.
Asrani: That is because the focus is not on the protagonist’s sexuality. It is on his personality. It is on his fundamental rights. He deserves to enjoy the exact same benefits as every other citizen of the country without his sexuality being tom-tommed for all and sundry. Besides, most gay stereotypes are written by straight people who have no clue. I am a gay man and I am not a stereotype. I am known as a filmmaker, son, friend and good citizen first. I’m not ashamed of my sexuality, but it’s my private business. I refuse to let people add the word gay as a prefix to my name.
Mehta: Exactly. I don’t see homosexuals as different. If you label or bracket them then their portrayal will seem exaggerated. For me, this is the story of a man without companionship. His only companion, actually, is Lata Mangeshkar (through her songs).
Asrani: When people watch Aligarh, they will see how the two magical actors have created chemistry on the screen that might be hard to label. You might find yourself asking, are they friends? Are they lovers? Are they teacher and student? What is it? That indefinable relationship is at the heart of Aligarh.

Hansal, you have a long-standing interest in semi-biopic films and real-life characters.
Mehta: There are so many stories of real people in our own country. There is a story of ordinary, unsung heroes at every corner. I would rather bring these people to life on screen and chronicle our times through the common man. The stories find me, through newspapers, in my inbox or my junk mail, through travels. My earlier stories were all from Mumbai, Aligarh is from Uttar Pradesh, Simran [his upcoming movie] is from the USA. These are inspired by real-life events that have affected our landscape. They are about common people and their uncommon deeds, and that journey will tell you the history of your country through a different perspective.

Do you prefer making films about characters who question the system from within?

Mehta: I don’t know any other way. As citizens, it is important to challenge the system to keep it robust and alive, and I do so with my characters. The challenge is in being truthful to the characters, their emotions and conflicts, and following their journey with utmost honesty.

Apurva, after working as an editor on films such as Satya and Children of War and as a writer on Shahid and Aligarh, what were the challenges of writing a film about a man who was barely known and is now dead?
Asrani: Our central character is based on a real life character who died only five years ago. There are write-ups about him and a few videos too. So on one the hand, it was easy to get references for his character, but on the other, it was very challenging because comparisons will be inevitable. Also, we got access to some of his colleagues and friends, who shared a lot with us. But barring one or two family members, the rest of his family was not very supportive. It felt like he had been shamed and disowned.

How much is reality and how much cinematic license?
Asrani: The plot points are all real. I have tried to stay true to Ishani Banerjee’s research and maintain the essence of Siras’s character from the interviews we conducted. But the professor was a very private man, so his personal life required some speculation. I had to put my own loneliness, my quest for dignity and my challenges with my own sexuality into the script. Siras was not a unique case; there are millions of people in India struggling with issues of identity and acceptance. What you may call cinematic license is an attempt to bring forth those issues through Siras’s story.

Hansal, what does it take to get mainstream actors like Rajkummar Rao and Manoj Bajpayee to play marginalised characters like Shahid and Siras?
Mehta: My films are what they are because of the people that inhabit the background and the foreground – from the director of photography to the editor, composer, screenwriter and actors. Raj and Manoj are phenomenal actors. Manoj’s performance will be counted among the best portrayals of a gay character. As for getting them to interpret the characters, Apurva’s script deserves credit for that. It provided enough information for the actors to take cues from. A professional actor soaks up everything and then interprets the material and brings his performance. Sometimes I wonder what I actually do. I think I am like Uber: an aggregator of talent!

Apurva, as the writer and editor did you stick to the structure of the script or reinvent it on the edit?
Asrani: The narrative structure was instinctive. The focus is on this character personified by the brilliant Manoj Bajpayee. When the camera rolls on him you don’t want to cut away. His eyes suck you in. His melancholy guided the storytelling. We follow him and try to understand him through the eyes of this 20-something journalist played by Rajkummar Rao. Raj’s Deepu is meant to be the audience. His character is what we would call normal, i.e. he is not deviant in the eyes of society, but then again you question, is he really?

Hansal and I made a deal that I wouldn’t come to the set. That way I would have some distance between the writing and the editing process. When I first saw the rushes, I did undergo some “expectations versus reality” anxiety. But, as an editor, I am trained to see the rushes for what they are, as opposed to what they were meant to be, and I decided not to refer to the script anymore. I am glad I edited Aligarh. I got another chance to rewrite it on the table and sharpen the point of the script.

How important was realism to the narrative?
Asrani: Hansal is pretty realistic in his approach. He hates actors who look like they’re acting. His actors must find the character from within. He strikes off dialogues from the script that sound laboured. He chooses locations over sets; sometimes giving the cameraman very confined spaces to place the camera. But he seeks out truth. I just follow that lead. When we first collaborated on Chhal 14 years ago, we made a dramatic film with crazy camera angles, slow motion shots and cut it like a zany music video. Aligarh doesn’t have a single jump cut or dissolve. I have tried to write it and edit it without gimmicks.
Mehta: When dealing with real life characters from real situations from our world, it’s important for us, and the audience, to be a part of that character’s world. So it is important that I create a world that feels real. Unless it feels authentic to me – both internally and externally – I find it difficult to shoot. I know no other way of filming. I tried the other way, and I failed.

Hansal, you have had a pretty chequered career, with films ranging from Dil Pe Mat Le Yaar and Chhal to Woodstock Villa and Shahid. Do you still feel anxious about your work?
Mehta: It’s important that one’s work is seen by a maximum number of people, that it provokes debate and thought. But it’s equally important that the investors recover their cost and make a decent profit. This will enable me to make another film. This cycle has to continue. 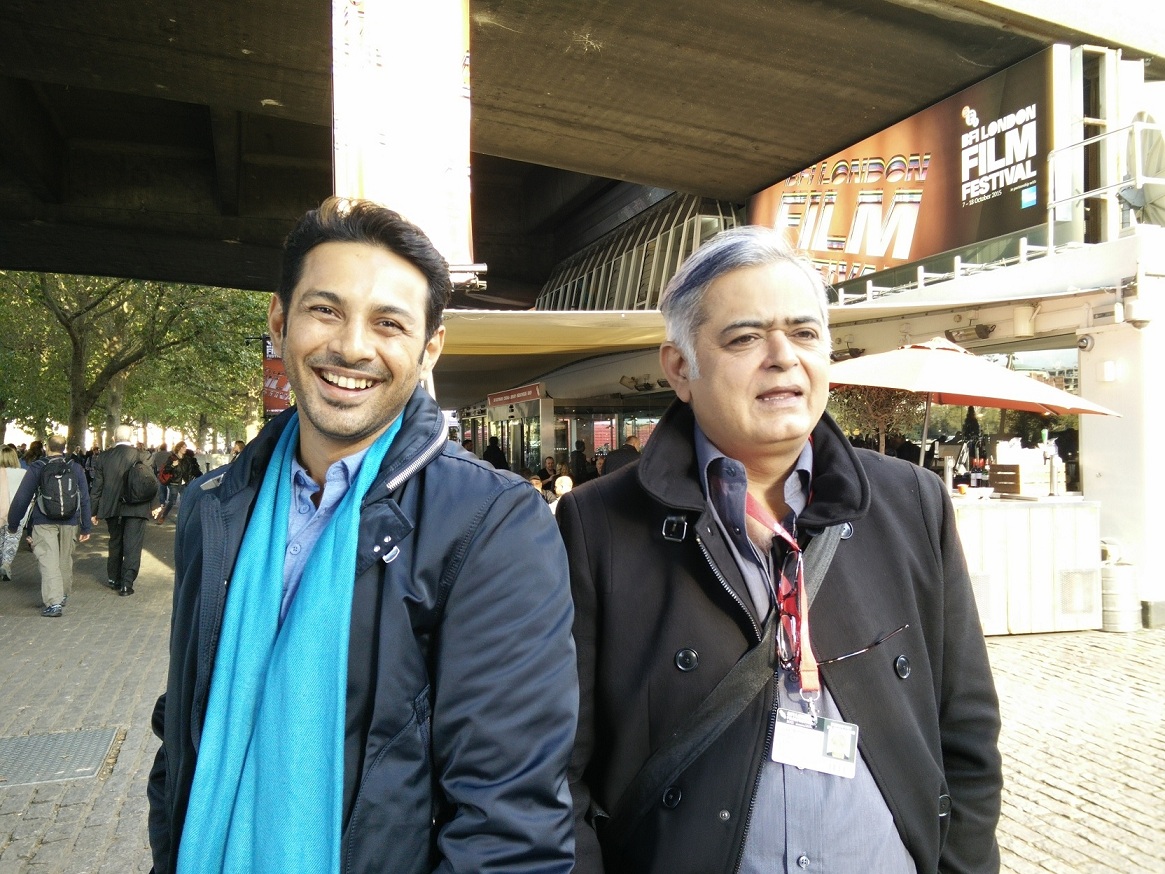 Apurva Asrani and Hansal Mehta (right) in London for a screening of ‘Aligarh.’