The two men, 55-year-old Mohammad Shafiq and 27-year-old Mohammad Kalam, were skinning a cow when they were accused of slaughtering the animal. Very rapidly, a mob of 1,000-1,500 people, according to police estimates, converged on the spot, a stretch of open land next to a small irrigation canal just beyond a predominantly Hindu basti.

Shafiq and Kalam, who work as butchers, were stripped and beaten. A police party that attempted to control the crowd was roughed up as well. Three of its vehicles – a jeep, a Bolero and a motorcycle – were burnt. After the police succeeded in rescuing Shafiq and Kalam, the mob loaded the cow onto a cart and paraded it through Karhal.

Along the way, it looted the vegetable market, ransacked and torched shops belonging to Muslims, and burnt an effigy of Samajwadi Party leader Azam Khan.

Following so closely behind the lynching of Mohammad Akhlaq in Bishada village near Delhi on the ill-founded suspicion that he had killed a calf, the riot made the national headlines.

It also triggered perplexity. Situated just 4 km from Mulayam Singh Yadav's constituency of Saifai, Karhal is part of the Samajwadi Party's stronghold in Uttar Pradesh – a party that has come to power by cobbling together an electoral coalition of Muslims and Yadavs. As such, say locals, the town has been quite amicable till now. What changed?

There were other questions. A local police official told The Times of India that the cow had died a natural death, and that the owner had asked Shafiq and Kalam, who usually slaughter buffaloes and goats, to take it away. However, the official told the newspaper, it was actually the cow owner's son who spread a rumour that the animal had been slaughtered, which resulted in the mob forming.

However, if you talk to the two affected families – one that purportedly owned the cow, the other of one of the men who is alleged to have killed it – and you get contrasting versions of events. 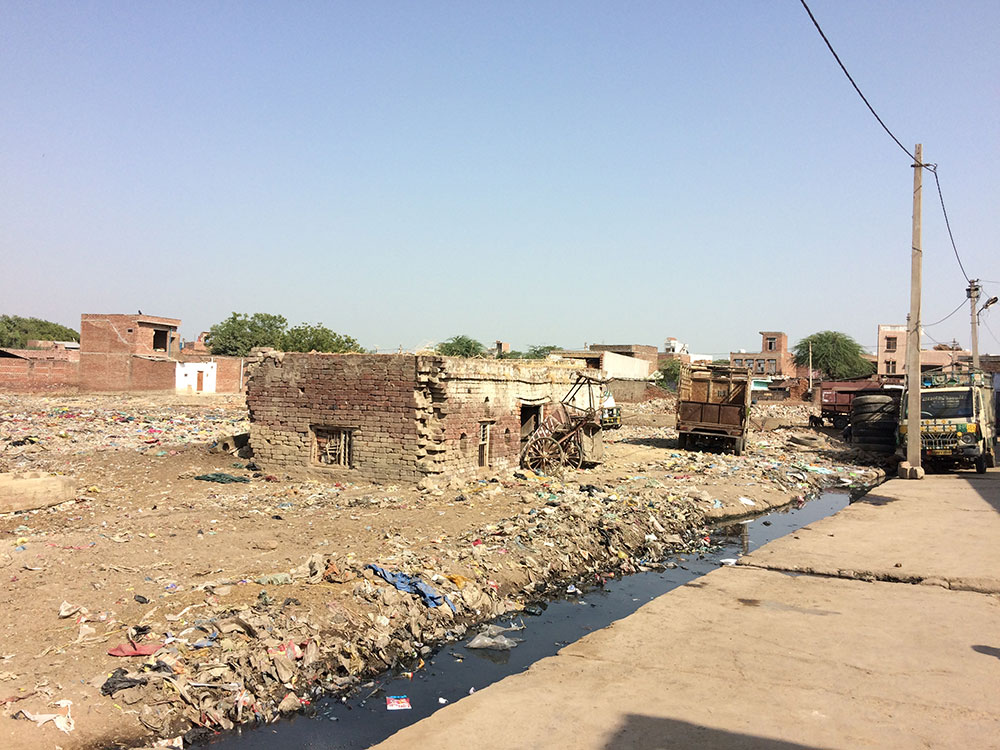 On the Hindu side of Karhal are fields. On the Muslim side, plastic-filled wastelands.

On Monday, Scroll.in visited the family of Petha, the man who had asked Shafiq and Kalam to dispose of the cow. Theirs is one of the few Thakur families in Karhal. Petha has a sub-dealership for Coca-Cola. One of his brothers works in a shop in Saifai that repairs machines. A third supplies jeans from Delhi to local merchants.

Petha and his son Pratap are on the run. The womenfolk were home, and were understandably distressed. “Ghar mein chulha hi nahin jala,” one of them said. We have not even cooked at home.

They explained that, contrary to news reports, the cow did not actually belong to them. “We stopped keeping buffaloes and cows four or five years ago, after my in-laws passed away,” said Petha’s wife. The cow in question, she said, used to come by every day, and the family fed it. On Thursday morning, she said, her husband commented that the animal had not come by that day.

Shortly afterwards, she said, she saw the cow tied up on a cart. It was taken by Shafiq and Kalam to the tract of open agricultural land just beyond the Hindu houses. The two men began to skin it, next to the canal, Petha’s wife said. She claimed that the animal was still alive at the time.

When a hue and cry was raised, a mob gathered quickly,  she said, and then the situation turned violent.

However, Shafiq’s 27-year-old son, Mohammad Jalil Qureishi, suggests another sequence of events. To get to his house, you leave Petha's house, walk back to the main road, turn right and walk past the sabzi mandi. A little beyond is the lane that leads into the Muslim quarter. 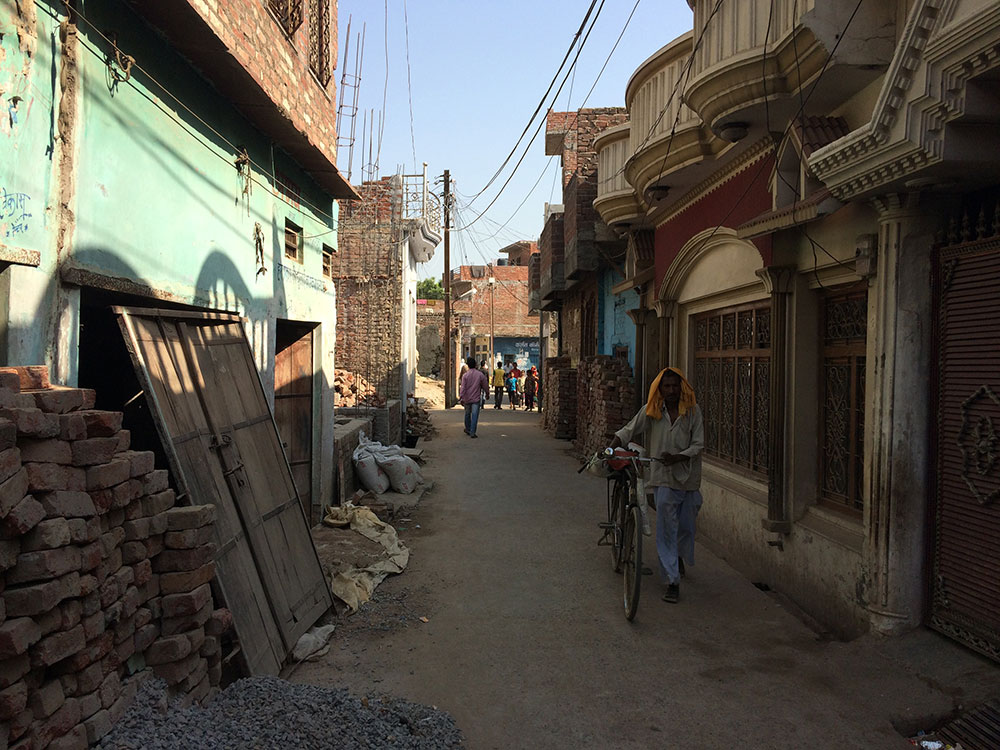 The lane leading to the Muslim neighbourhood.

According to Qureishi, Petha first came with news about the dead cow around 8 pm or 9 pm on Wednesday night. “There were no bhangis [the caste group that traditionally carts away dead animal] and so we refused,” he said. But, he claims, Petha came again twice the next morning – at 6.30 am and again at 8.30 am.

The second time around, Shafiq and Kalam agreed to pick up the cow.

Qureishi insists that the cow was already dead. “Most of our work is with buffaloes,” he said. “We do not even have a license for cows.”

Their basti, he added, is surrounded by Yadav houses. “Hum log Hinduon ke beech mein rehtey hain,” he said. We live in the middle of Hindus. The community works on cows only when one dies naturally and they are called to help dispose it, he said.

When it came out, the post mortem conducted by five local government veterinarians supported Qureishi's version. It said the cow had died the previous evening, around 4 pm. The cause of death, it said, was acute tympanitis, which resulted in respiratory failure. As this link suggests, the cow might have eaten something that resulted in the build up of gas in its rumen, causing it to bloat, putting pressure on its lungs.

A police official, who spoke to Scroll.in on the condition of anonymity, clarified that the cow was a stray and did not belong to anyone. It was found dead on Thursday morning, about a kilometre away from Petha's house, he said. “When it was loaded onto the cart and wheeled away, several villagers saw it being taken away,” the official said. “No one protested then, which they would have if the cow was alive.”

Besides, he added, if the cow had to be killed, why would the two Muslims kill it so close to the Hindu houses?

Qureishi had posed the same question: “Agar 2 number ka kaam karengey to raat ko karengey ya hamarey area mein karengey.” If we had to do something illegal, wouldn't we do it at night or in our area?

If the cow was indeed dead, why did this controversy erupt?

The people best placed to answer that question are Petha and his son, Pratap. According to a family of vegetable sellers, who live across the lane from Petha's Coca-Cola shop, Petha and the Muslims had got into a fight a while ago when Petha's buffalo died. Explained Vijay Kumar, “The Muslims had asked for Rs 1,000 to take the animal away.” Petha felt that was too high. At that time, Kumar said, Petha threatened the Muslim men, saying, “Tujhe dekh loonga.” I will show you.

There are other questions. For one, it is not clear how Petha got to know about the cow's death that evening – even though it died, as the police officer says, a kilometre away from his house. Nor is it clear why he was so eager to have the cow skinned that he went to the Muslim basti three times in the next 12 hours.

Besides, Petha’s visit to the Muslim basti the night the cow died challenges his wife’s claim that he had wondered about the cow’s whereabouts the next morning.

And yet, what occurred last Thursday was not a minor dispute between two parties. It snowballed into a riot with the involvement of 1,000-1,500 people, and the targeting of Muslim shops.

Even more strikingly, as the police official says, was the fact that the riot erupted on a day that the force  was badly stretched.

Zilla Parishad elections are underway in Uttar Pradesh. The morning the cow was found dead, said the officer, was the first day of voting. “We were all on election duty,” he said. “The only force available at the local police station was a senior sub inspector and one constable.”

What explains all that?

Lying as it does, so close to Saifai, Karhal is a pocket borough of the Samajwadi Party.  The Bharatiya Janata Party and Congress have a very weak presence here. This part of Mainpuri has at least five Samajwadi Party candidates vying for the local MLA ticket.

One of those leaders is Sanjiv Yadav. Tiny Karhal, with a population of about 50,000 people, is governed by a Nagar Panchayat. Yadav, a member of the Samajwadi Party, is its chairman.

In the politics of the party that counts Muslims among its main support groups, Yadav is an outlier. While contesting Nagar Panchayat elections in 2012, said Qureishi and others, Yadav had campaigned on a plank that he would not take votes from Muslims. This bias of the administration is evident as you walk through the town: the Muslims sections are shabbier even though Yadav claims he has spent a lot of money on development.

When Scroll met him, he disputed the post mortem report. “Have you seen those photos?” he asked. “There is a lot of blood in them.” The cow, he insisted, had been killed by Shafiq and Kalam. 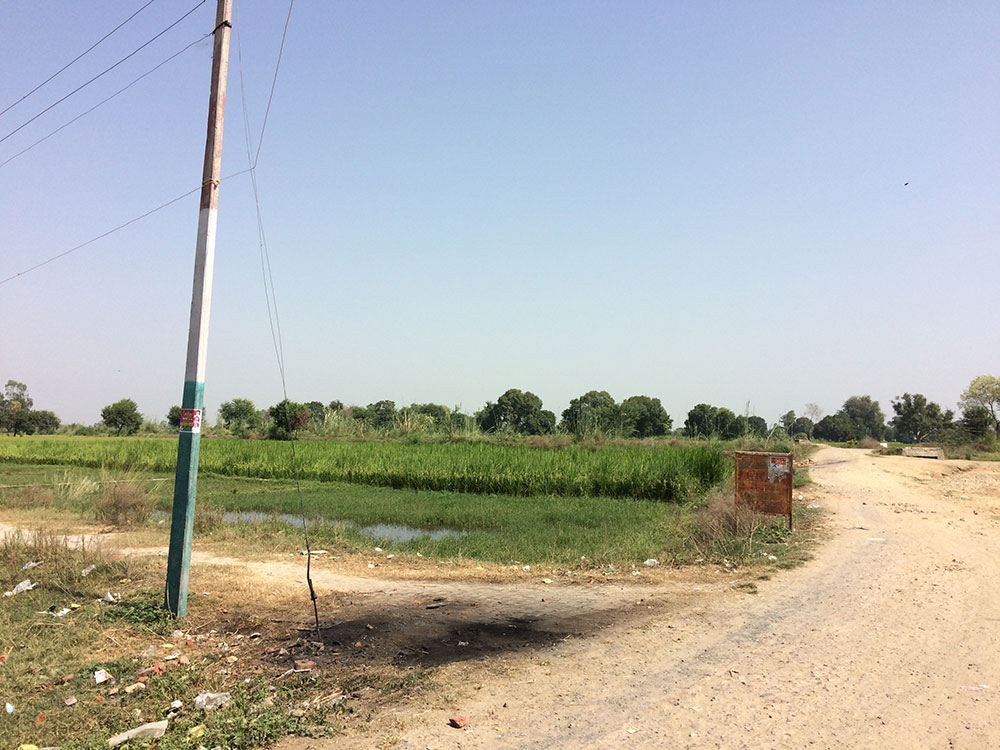 The field where police vehicles were burnt.

In Karhal, one cannot escape chatter linking him to the violence. Yadav's brother, Titu, has been named in the police FIR about the riot. According to the police official, it was Titu who brought the kerosene and diesel to set the police vehicles afire. Even Shafiq and Kalam, he said, had been doused with it. If the police had not rescued them, he said, they would have been killed.

For his part, Yadav denies being in Karhal the day the riot occurred. He also said jealous rivals were dragging his name into the controversy.

But locals suggest that there’s more to it than Yadav is willing to admit. For instance, Manik Chandra Yadav, a local leader who rushed to the site in an attempt to cool down tempers, said that there was a complex dynamic at work, Though he refused to name Sanjiv Yadav, he said, “This is an attempt to become a leader, whether from inside the Samajwadi Party or outside."

Seen like that, a riot is a way to engineer a new support base, by radicalising the town’s Hindu population.

At this time, it is not clear how successful the attempt at polarisation has been. As the police official said: “The active members of the mob were just a few rioters. Most of the others were people who had come to look. They were not there to break law and order.”

Community meetings have been held to denounce the riot.

However, some damage has been done. The Muslims of Karhal are shaken. Some of them are talking about starting businesses that have nothing to do with animals at all.