Contribute Now
Ad
The ongoing state elections in Bihar are crucial for the Bharatiya Janata Party for many reasons. Besides forming a government in that important state, the BJP has its eye on the 16 seats that Bihar sends to the Rajya Sabha. It currently holds four of them, the other 12 being occupied by Janata Dal (United) MPs.

Since it came to power 18 months ago, the legislative agenda of Prime Minister Narendra Modi has repeatedly bumped against the upper house hurdle, the only institutional space where the opposition can effectively organise itself. The Land Acquisition Bill, the Goods and Services Tax Bill and other important legislations were defeated because of the one institution that the BJP does not control.

The present composition of Rajya Sabha is heavily skewed against the BJP-led National Democratic Alliance. It counts only 63 members against the United Progressive Alliance’s 126. Parties that are out of both alliances currently hold 45 members among them. Ten members are nominated by the President of India. The Congress is the largest party in Rajya Sabha with 67 members whereas the BJP has only 48. 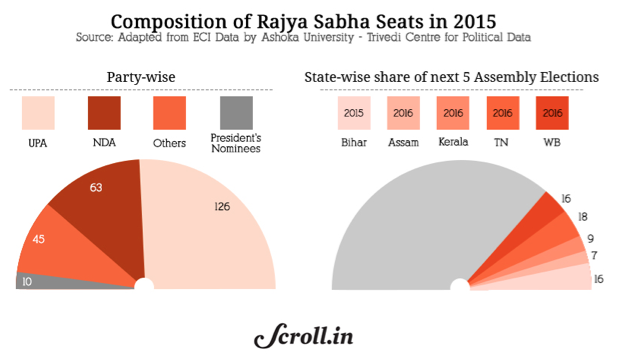 The BJP’s recent performance in state elections – barring Delhi – will help it to increase their presence in the Rajya Sabha. But Bihar, with its 16 seats, is a prize to catch. However, the particular mode of election of Rajya Sabha members and its calendar have the effect of delaying considerably the gains obtained in state elections.

Rajya Sabha members are elected by a single transferable voting system. Every two years, one-third of the Rajya Sabha members retire. The assemblies of various states then elect their new members. Parties list their candidates by order of preference and get them elected according to their weight in the Vidhan Sabha. They translate their number of seats in the Vidhan Sabha following a particular formula that defines the minimum number of votes (that is seats) required to elect a candidate.

Candidates getting the required quota of votes are declared elected. But if all the vacancies are not filled, the candidate with the least number of first preference votes is eliminated and the votes are then transferred to the second preference candidate. This process continues until all the vacancies are filled. This means in effect that a change of composition of a Vidhan Sabha will only translate into gains in the Rajya Sabha as fast as the seats get released by one third every two years.

In the current calendar, the seats currently occupied by members from Bihar will be released in the following sequence: five in 2016, six in 2018 and five again in 2020. By the formula, it requires 41 MLAs to get a Rajya Seat in an election for five vacancies, whereas only 35 MLAs are required for an election of six vacancies. So, under which circumstances, could the BJP and NDA sweep all the Rajya Sabha seats and by when would they get the benefit? We can draw the following two scenarios: 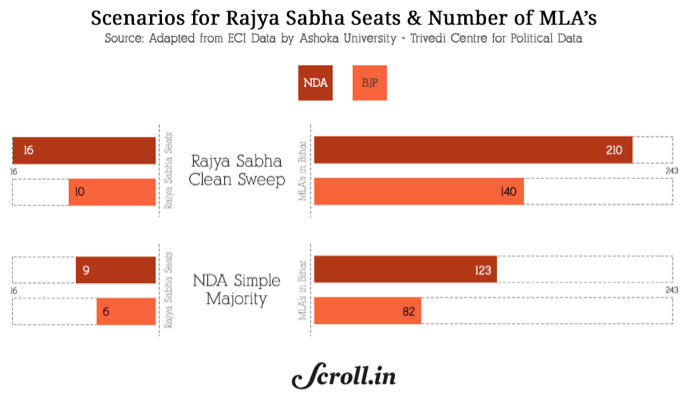 A more modest single-majority scenario would fetch the NDA nine seats over time. If the BJP manages to win at least 82 seats out of the 160 it is contesting, there is a high chance that it could get six Rajya Sabha seats individually. That means winning 51% of the 160 seats it is contesting in these elections.

But in both cases, the delay effect would mean that the BJP – or any other party – would not reap the benefits before 2020, which is beyond the first mandate of Narendra Modi. That simply means that even if the BJP keeps winning a streak of states – unlikely to happen in the incoming election states of West Bengal, Assam, Kerala and Tamil Nadu – it will still be struggling with an institution of which, until recently, many questioned the relevance.

Bihar: What does an analysis of incumbents’ performances reflect about Election 2020?