This is a sum equivalent to two-and-a-half times the defence budget; roughly six times the amount that will be spent this financial year on building roads; and enough to wipe out India’s fiscal deficit.

The data reveal the urgent need for electricity reforms and the amount of money being wasted at a time when India is cutting back on health and social-sector spending.

Electricity utilities incurred a net loss of Rs 62,154 crore during the financial year 2013-14. This is not a one-off: losses have been in this range for the past several years in a row.

The annual loss of state utilities is more than twice the total allocation to Department of Health and Family Welfare and 10 times the budgetary allocation to the Ministry of Drinking Water and Sanitation. This money is enough to pay for 300 light combat aircraft Tejas – sufficient to meet Indian Air Force’s need for new squadrons.

If supplying electricity were an actual business – as it is in many countries – it would have been bankrupt, with lenders worrying about recovering their money.

As it happens, since the borrowers are owned by the state governments, they continue to be shown as viable, as are their standard assets. 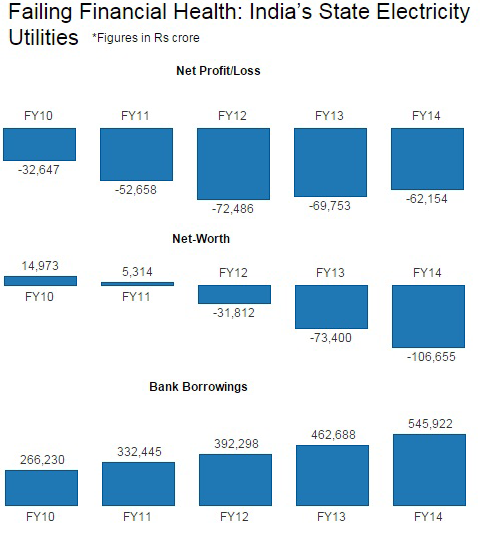 Why are state utilities such loss makers?

The primary business of these utilities is to sell electricity to consumers – industries, commercial establishments, households and agriculture.

During FY14, their average cost of supply was Rs 5.15 per unit while the average selling price was Rs 4 per unit. So, these utilities lose Rs 1.15 per unit.

However, this is not an across-the-board loss that is incurred on all electricity sales – far from it. Utilities are losing money because large groups of customers are either paying very little or not at all for power.

India’s power companies lose a large volume of power to unmetered consumers, to outright theft and to technical losses due to poor systems. During FY14, these losses accounted for 22.7% of all electricity generated by utilities – meaning, for over one-fifth of their product, the utilities got no revenue.

There are other consumers that pay only a fraction of the actual price of electricity. Agricultural consumers used 22% of total electricity during FY14 but accounted for only 8% of the revenue. This is because electricity for farmers is free in many states and is highly subsidised in most others.

In short, 44.7% of the product gets in just 8% of the revenue. As a result, other users end up paying much more.

For instance, in Haryana, agricultural users pay less than 50 paise per unit, while industrial users pay more than Rs 5 per unit.

A similar trend is visible in states like Andhra Pradesh (before the division) and Uttar Pradesh – industry pays prices 4-10 times higher than those for agricultural users.

In cities like Mumbai, industrial and commercial users often pay over Rs 10 per unit for electricity, which IndiaSpend has reported earlier.

At an all-India level, agricultural users pay less than Rs 2 per unit, while industrial and commercial users pay upwards of Rs 6 per unit and Rs 7 per unit, respectively.

The result: State companies are driving away their best customers

One impact of this distorted pricing structure has been that large industrial consumers – the kind who subsidise agriculture and make up the losses from power theft – are gradually moving away from state electricity boards.

Large electricity users can and do set up captive generation plants – which added up to 36,500 megawatts of capacity by 2012, according to the erstwhile Planning Commission.

This was almost a sixth of the electricity generation capacity of utilities. By overcharging them, the state electricity boards are driving away their best and biggest customers – and sinking further.

Second, because they incur heavy losses, the utilities cannot upgrade infrastructure, and since they lose money on electricity sales, they try to source only the cheapest possible electricity – generated using subsidised fuel from Coal India.

State-sector plants are in a worse situation; paying for fuel/operations isn’t always possible, and they operate at 54% of their capacity.

Finally, the losses also mean that state utilities cannot or will not pay for renewable energy,  which doesn’t pollute the environment but is more expensive than coal or nuclear power. It is a nascent technology with a high, but decreasing, cost.

For 2015-16, Central Electricity Regulatory Commission has set a tariff of Rs 7-12 per unit for solar electricity generated from different technologies.

A financially unviable electricity sector means investments in next-generation technologies, such as renewable energy, will be seriously hobbled.