Contribute Now
Ad
Even though India spends a substantial 2.4% of its Gross Domestic Product on defence, it has earned a dubious distinction of being a heavy arms importer rather than a manufacturer. The government, on its part, has opened up the defence sector to foreign manufacturers, allowing them to own up to 49% share in companies. With this one move, the government expects to replace outdated equipment and attract anywhere between Rs 60,000 crore to Rs 80,000 crore in investments.

It remains to be seen how far the move works in favour of its defence forces, but one thing is clear: India will need to reform its legislative oversight and processes to control possibilities of corruption, a new report by Transparency International points out.

In its latest review of transparency in defence procurement, the organisation studied 17 countries in the Asia Pacific region and placed India in 'D' category indicating high vulnerability to corruption in defence deals, ranking the country at the 8th position, ahead of neighbours such as China, Pakistan and Sri Lanka.

This, however, is not enough cause for a celebration as the report highlighted grave threats to transparency in the sector due to low public accountability of defence institutions. What this means is that defence equipment procurement could be marred with corruption, if the independent institutions such as the Comptroller and Auditor General are not strengthened.

While most of India’s immediate neighbours were ranked below it in the transparency index, Bangladesh stood out as an exception as the nation achieved a higher rank even though it was categorised in the same risk block as India. The top spots were taken by nations such as New Zealand, Australia, Taiwan and Japan for having stronger institutions.

The report cited instances where Indian military officials were found to be using land allocated to them to build shopping malls, cinema halls etc and in 2013, Indian Army was found to be running an unauthorised golf course on the land it was alloted.

Meanwhile, it added that it is a good thing that the leadership has expressed will to oversee unchecked practices.

“A weak institutional framework for defence procurement was also identified as a major gap, though the use of Integrity Pacts and commitment by leadership to improving procurement practices were positive,” it added.

India’s defence budget has increased over 147% in the last decade while China’s spending on military has grown by 447% in the same period but both the countries were lacking in ensuring that corruption in procurement is checked by independent authorities leading to fears that politically motivated moves could hinder stability in the region.

India was put in block D with “very high risk” for corruption in defence procurement while neighbours such as China, Pakistan and Thailand found a place in block E representing a “critical” risk for corruption. 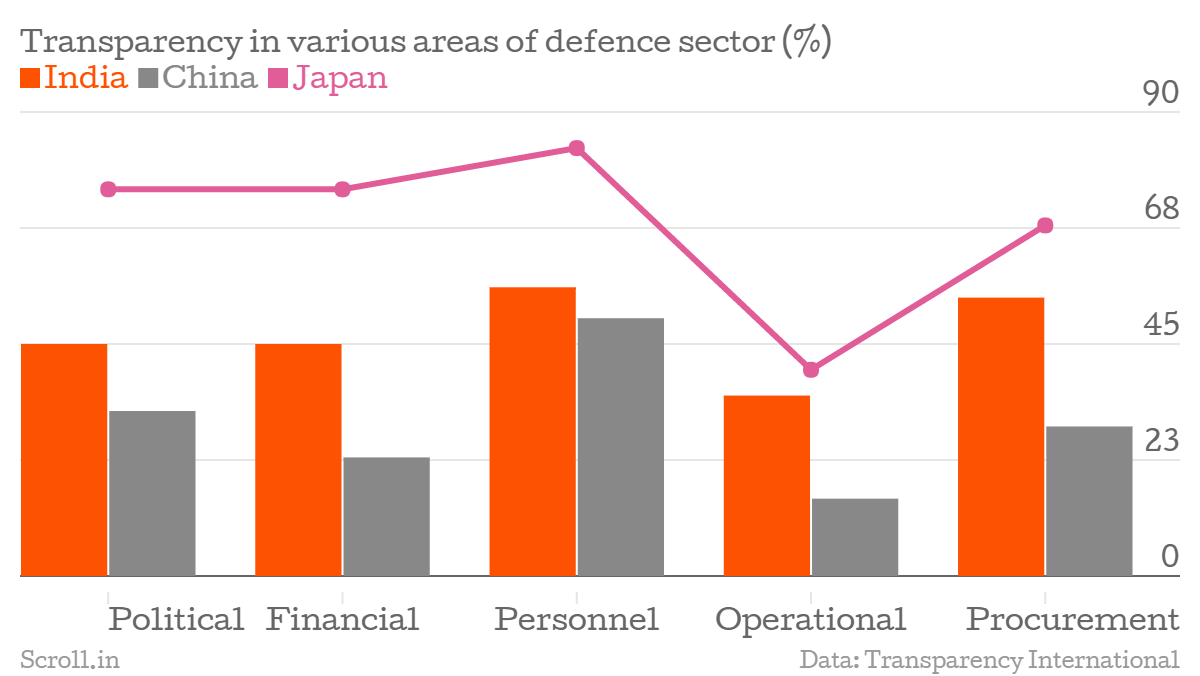 According to the report, China accounts for nearly 30% of the world’s most secretive spending and has failed to check military power which could “pose a threat” to the stability of the region. Even as the country has attempted to increase checks and balances through a new e-procurement platform and push from the President Xi Jinping, the report said that there’s “no evidence” that a comprehensive assessment of these deals has taken place.

“The lack of transparency around investigations has also increased the perception that the campaign is politically motivated,” the report added.