Become a Member
Ad
Standing in one corner of the courtyard was this group of bald dervishes in different stages of old age. Their naked bodies shone through the thin black shawls they had draped over themselves. They seemed uneasy, standing there uncomfortably, as if out of place. Their feet and faces were covered in dust. Some of the older dervishes had kohl in their eyes, which seemed to enhance their sharp stares.  In front of them was the shrine of the 16th century Sufi, Daud Bandagi Kirmani – a modest building, with a small structure and a white dome on top. The courtyard around the shrine was teeming with pilgrims. We happened to be visiting the historical city of Shergarh, about 100 km from Lahore, on the occasion of the annual urs of Hazrat Daud Bandagi. 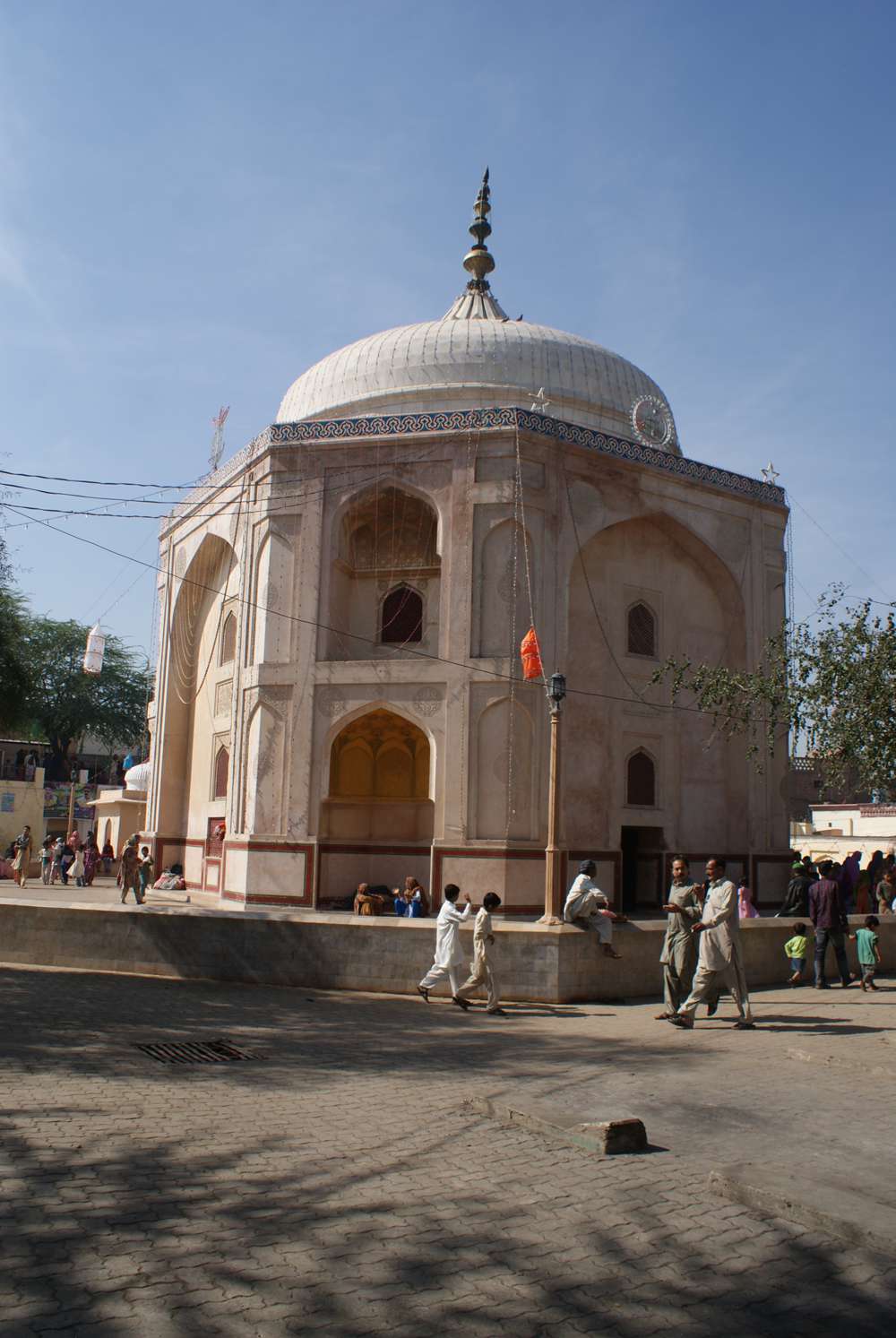 The mausoleum of Daud Bandagi

It was as if the entire city was celebrating the urs. There were food stalls and shops wherever one looked. The aroma of freshly prepared samosas suffused the air.

The shrine is located in the middle of this city. It also occupies a central place in the imagination of the people of the city. Women, men, children, old and young, all throng to the shrine for these festivities. Walking in the midst of these people are pirs and dervishes. Some offer their services to the locals, promising respite from an evil eye. Others prepare their own magical spells that need to be mixed with water and consumed.

These Sufis belong to different orders. There are those who belong to a conventional, orthodox Sufi sect. For them following religious doctrines is as much part of religion as shrines of saints, like this one. There are various distinctions within these conventional sects as well. And then there are the Malmatis – the rebel Sufis, who flout religious laws, and don’t belong to any particular order. One can therefore appreciate the contradiction in categorising the Sufi dervishes into the Malmati order, because within them are those who establish their legitimacy through various historical and religious traditions.

I walked into the main shrine. It was a beautiful structure, well maintained by the descendants of the saint. Their havelis are situated all around the shrine. At the centre was the shrine of Daud Bandagi. Devotees circumambulated around the room and then stopped next to the tombstone of the saint, where they would offer a special prayer. Next to the grave of the saint, on a raised platform was the preserved footmark of the saint. Some devotees prayed to it while others kissed it reverentially. Looking at this structure, I was immediately reminded of Jain temples that are also constructed around footmarks of saints. My thoughts went back to the dervishes I had seen outside. Their semi-naked bodies, their shaved heads, and beardless faces reminded me of Digamber Jain monks, who too remove their bodily hair, as a symbol of renunciation of the world and don’t wear clothes. “You know these dervishes only cover their bodies when they visit a public place, like this one,” said Iqbal Qaiser, my friend and companion. “When they are in their deras [or camps], they only wear a lungi or sometimes nothing at all.” 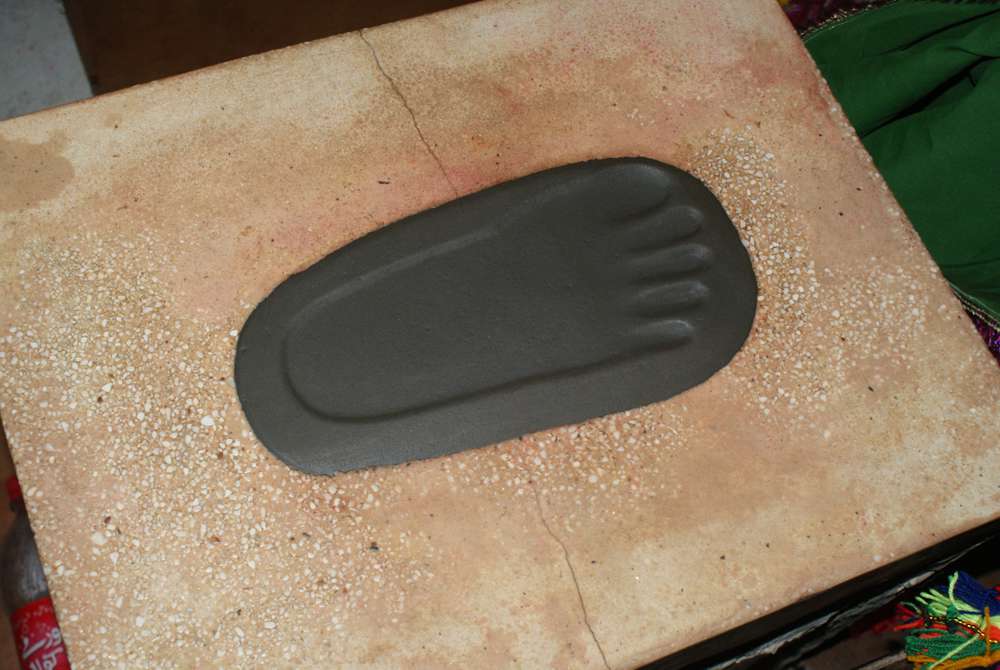 Daud Bandagi's footmark inside the shrine

These dervishes were distinctively different from other Malamti dervishes. The other dervishes let the hair on their heads and beards grow long, which too serves as a symbol of renunciation of the world.

Is their a connection between these dervishes and Digamber Jain monks, a knot that ties them together? There is no doubt in my mind that the latter became an inspiration for the former but what were the pathways that allowed for this influence to reach the other?

A few years later, I visited another historical city, Bhera, where I found myself in the premises of an abandoned Sikh shrine. On the walls of this shrine, made out of colourful frescoes I saw a figure which had uncanny similarities to the dervishes at Shergarh or Digamber ascetics. The figure wore nothing but a lungi and held a tomba in his hand. 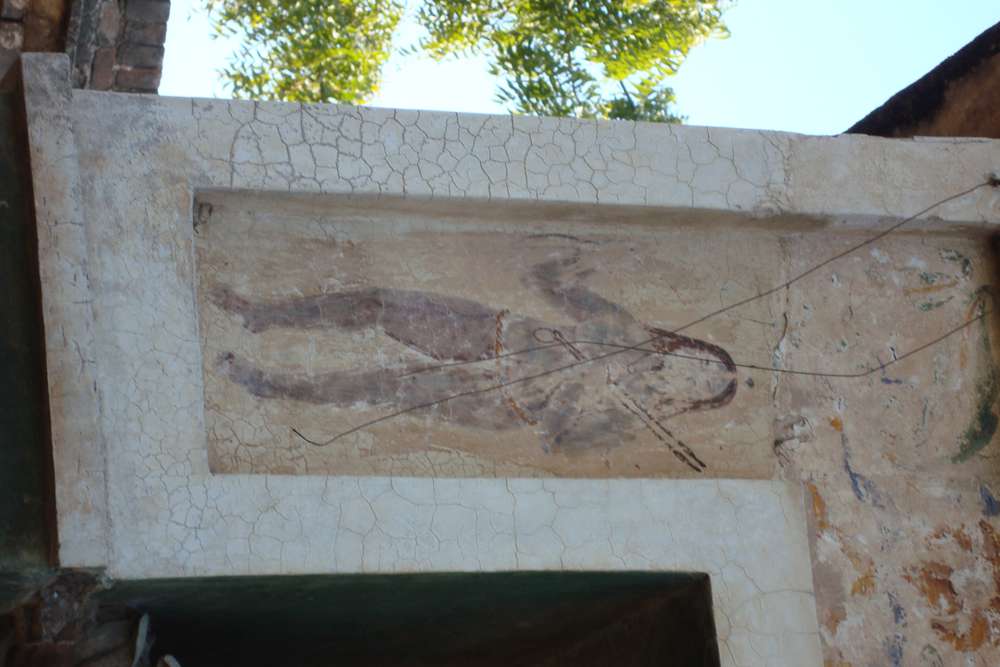 Figure of an Udasi Sadhu at a Sikh shrine in Bhera

In the Sikh tradition these ascetics are called Udasi Sadhu. Udasi derives from a Sansrkit term that means forlorn. In Sikh tradition, Guru Nanak's wanderings – his four preaching tours – are called his period of Udasi. These ascetics too move from from one shrine to another, which is what accounts for their name. They trace their spiritual lineage to Sri Chand, the eldest son of Guru Nanak. While Guru Nanak spoke vehemently against such extreme asceticism, his own son defied his teachings and became an ascetic.  Sri Chand is always depicted as wearing nothing but a lungi. Sri Chand had a disciple called Baba Gurditta, who in turn had four disciples, Balu Hasna, Al-Mast, Phool Shah and Govinda. It is believed that the first two were Muslims and through them Muslims too were attracted to Sri Chand's . Some of these devotees grew their hair while others removed them, like Digamber Jains. They shunned clothes and started living in secluded communities called deras. They would only temporarily cover their bodies when they had to enter mainstream society. They also scrub oil and ash over their bodies, which is meant to symbolise their death to the world of family relations business and caste – a rejection of this transient life. They became famous as Nange Sadhu or naked ascetics. 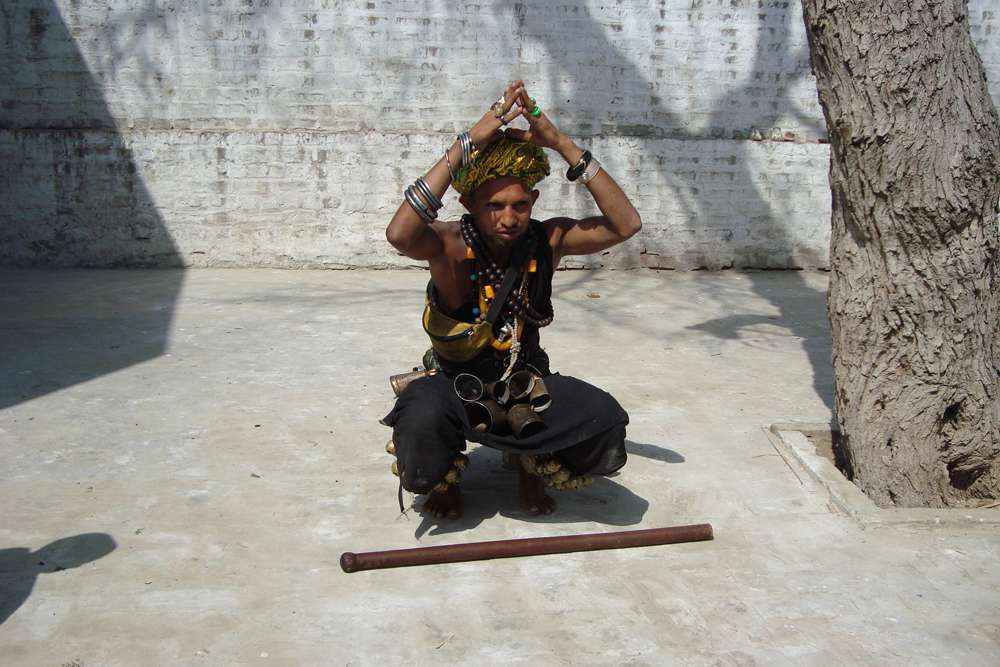 Perhaps the dervishes I had noticed at the shrine of Daud Bandagi belonged to this tradition of Balu Hasna and Al Mast? They remain in groups and spend their entire lives in perpetual udasi, wandering in a state of perpetual pilgrimage from one shrine to another. They can be noticed at every prominent Sufi shrine of the country. Could it be that it was through Sri Chand that influences of Digamber asceticism entered folk Islamic spirituality? Or perhaps such extreme asceticism was already part of the folk religious tradition of India, as also represented by the Naga Sadhus, which was later institutionalised by Digamber Jains. Perhaps these Nange Sadhu at Shergarh represent that primordial religiosity, before it was encoded into a religious tradition. 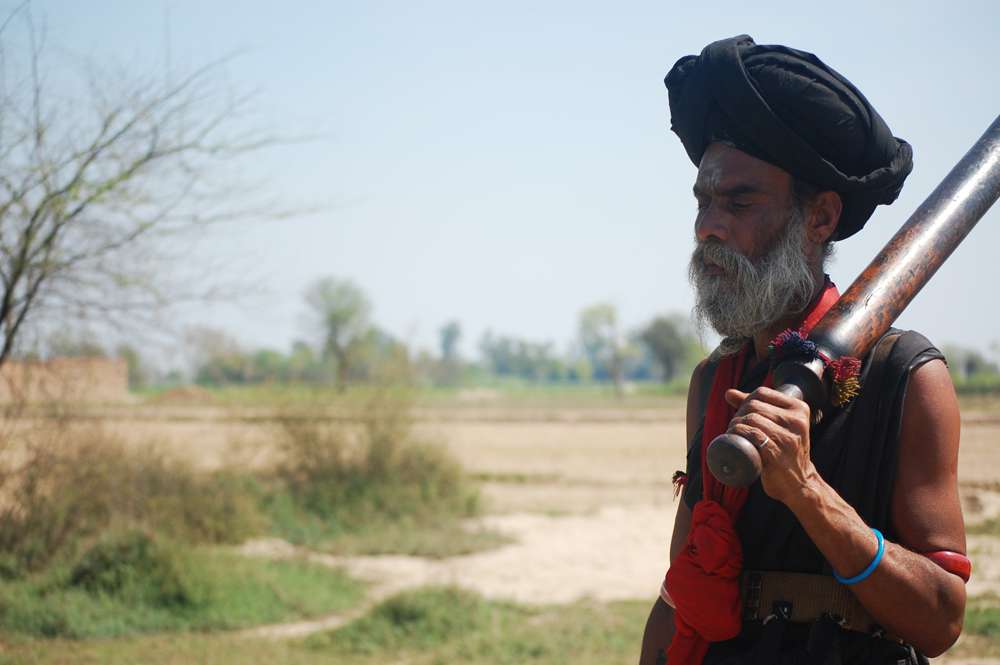 A malang on his way to the next shrine

Haroon Khalid is the author of A White Trail: a journey into the heart of Pakistan’s religious minorities and a forthcoming book, In Search of Shiva: a study of folk religious practices in Pakistan.

How do Crazy Rich Indians holiday? They rent Ronaldo’s yacht or ask Coldplay to sing their playlist