Contribute Now
Ad
For a country as diverse as India, it isn’t surprising that Diwali is celebrated here in different ways. In Goa, much of the enthusiasm revolves around Narak Chaturdash, the day before Diwali, and it is celebrated on a grand scale with Narakasur Vadh.

Narakasur Vadh marks the day on which Krishna slew the Asura king Narakasura, rescued 16,000 women captured in his eastern capital of Pragjyotisha or Pragjyotishpur, and restored their honour. Marking the legend, giant effigies of Narakasur are erected, stuffed with firecrackers, and burnt at dawn. 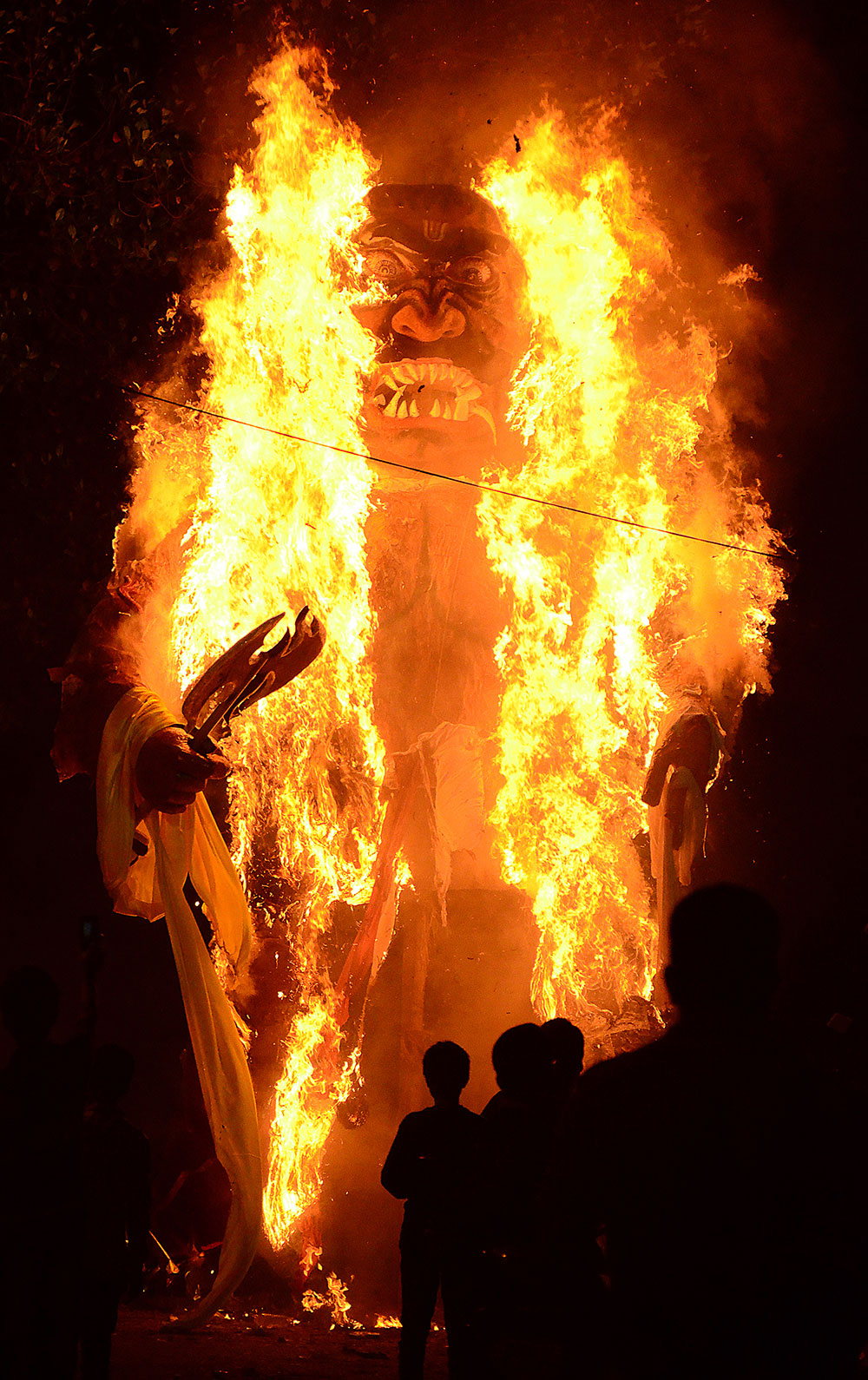 The preparations begin well in advance. In villages and towns, groups of young men and boys devise innovative concepts, before sharing the work of sourcing funds and material for building the tall, colourful effigies that will consume most of their evening hours for the coming month.

It’s a week before Diwali and Mala, the heritage quarter of Panjim, is buzzing. The “Kings of Mala”, as one group of boys describe themselves, are busy pasting rolls of newspaper pages with a glue of cooked wheat flour paste over welded metal frames, which are padded with hay stuffing to resemble the torso of a 15-feet tall muscular monster. They have rigged up a flood light. Near it, the orange FC Goa flag has been planted into the ground like a totem while the group works to the upbeat track of Sugar by the band Maroon 5.

The group’s effigy expert is Sarvesh Vaigankar, a young man who is wearing a rosary and crucifix round his neck, reflecting the casual exchange of cultures and religious symbols that mark ordinary life here. “We are building an effigy of a monster,” said Pranal Vaingankar, a member of the group, who sports an FC Goa T-shirt. “It’s too expensive to build an actual Narakasur, who was a king and must be decorated and dressed as such. This costs us Rs 10,000.” 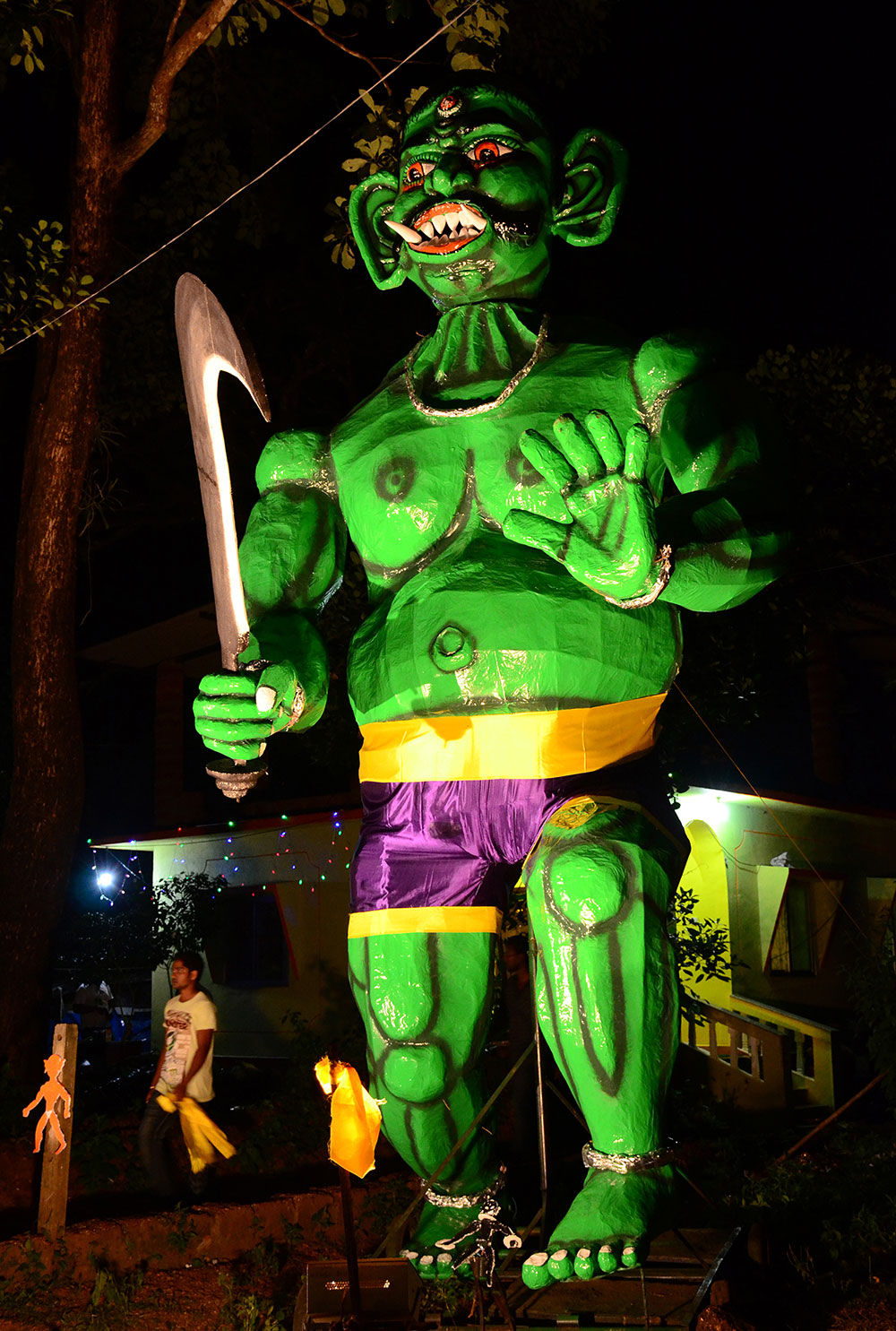 A block away, an older group of men is more ambitious. Ironically labelling their effigy “Prince of Mala” to the younger boys’ “King of Mala”, they claim their effigy is Panjim’s tallest Narakasur, as high as a three-storey building. Fibre replaces hay to create a firmer effigy, and the metal frame is thicker and has wheels. This will allow the team to transport it through the city on the night before Diwali, where it will compete at the local municipal corporator’s Narkasur competition.

“Prince of Mala” is the real thing. It will be fashioned and dressed like the legendary King Narak in finery and gold paper jewellery. The Sports Club of Mala has raised Rs 75,000 to build the mobile Narakasur, which will have a motor to enable the giant papier mache head to turn from side to side, while the torso and arms will be manually manipulated. The final touches to the Prince of Mala will come when he is spray-painted and decorated, his movable arms and heads hoisted by a lever to his full majestic height.

“Mala is famous for Narakasur effigies. People come from all over Goa to see them,” said Sarvesh Shirodkar, the project leader who has honed his skills over 20 years and now runs a wedding decoration business. Forty men work each evening on three or four effigies that will be kept at other places in the locality. “Sponsorship is not a problem,” Shirodkar added. 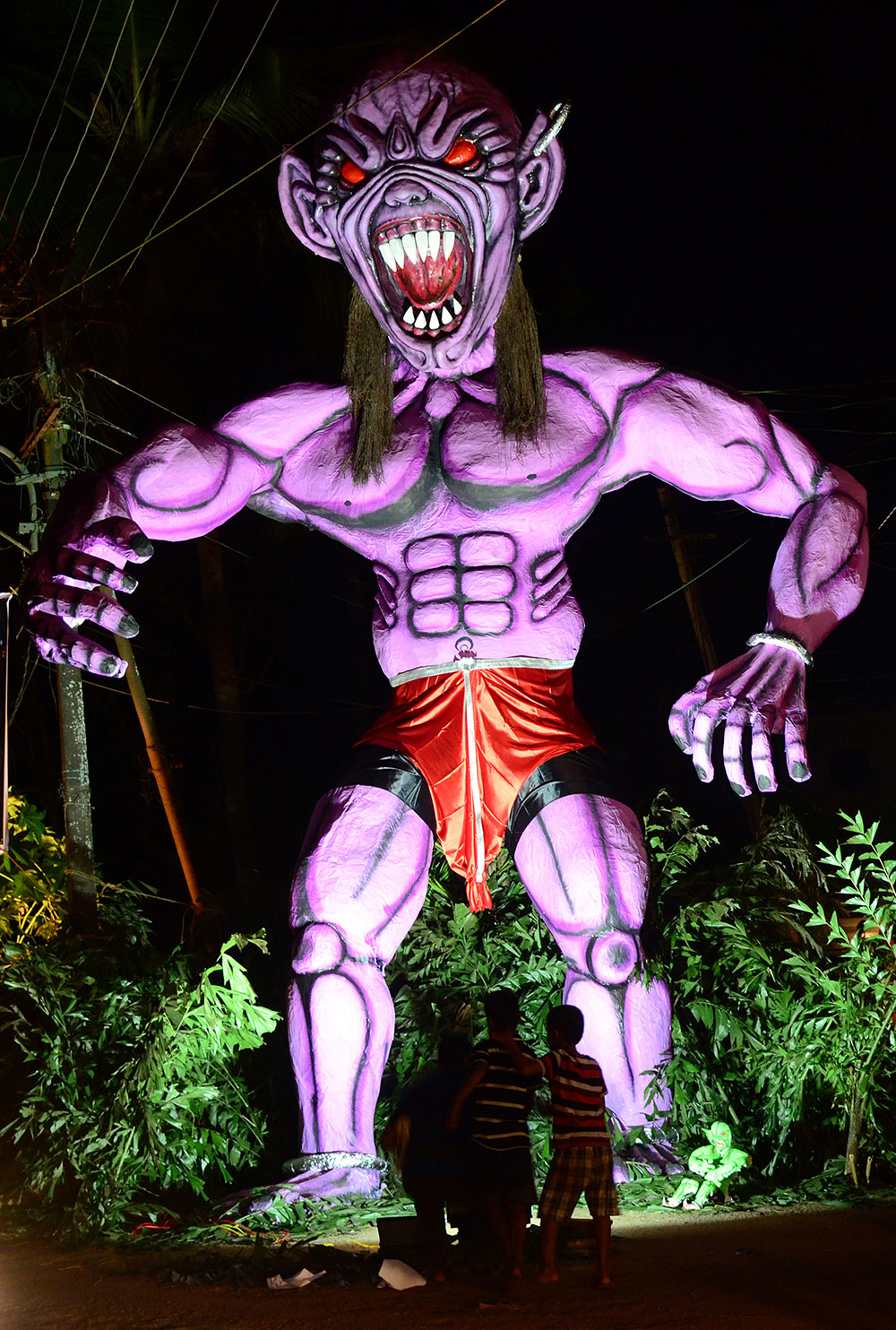 The group plans to tow Prince of Mala by truck to three competition locations. There are plenty of competitions, and the prizes range from Rs 75,000 to Rs 1.5 lakh. It’s not an uncommon sight to see flatbed trucks loaded with giant colourful Narkasur effigies race 40 km between Panjim and Margao to compete for the prize. It’s a night filled with excitement and exuberance, the streets crowded and sometimes gridlocked with cars and people jostling to watch the pyrotechnical display, which takes place in every village ward and town. Hundreds of effigies are burnt that night.

“In the old days, the effigies were simpler and smaller, built of hay and carted around on a bullock cart,” said BJP legislator and poet-dramatist Vishnu Surya Wagh, who heads the Goa Kala Academy. “I remember we used to build an effigy of Krishna as well. While the dhol was played for Narakasur, we played the mridang and the pakwaj for Krishna.” 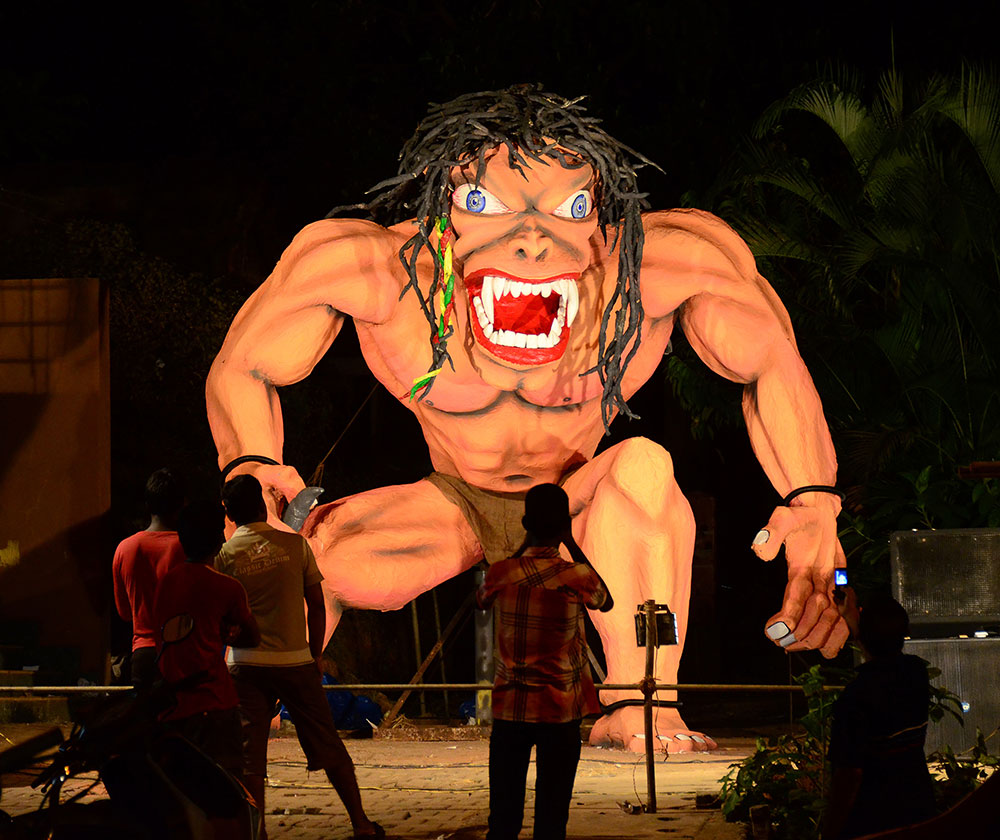 According to Wagh, the Krishna cult in Goa dates back centuries to a Mahabharata legend, which says that Krishna and Balaram were chased in battle by King Jarasandha and his supporters all the way south to Gomanchal Parvat, where they hid in the dense forests of what is believed to be present-day Goa. Legend has it that Devaki journeyed south to meet Krishna on the island of Chudamani (now known as Chorao, just across the Old Goa shrines).

The mother-son reunion is symbolised in the unique statue of the Devaki-Krishna temple that once stood at Chorao, but was shifted out during the early period of the Portuguese conquest of Goa. “People say that the statue with Devaki holding Bal Krishna is similar to the statue of Mary and a young Jesus in an altar at the Bom Jesus Cathedral in Old Goa,” said Wagh, emphasising one of the many mirror images that crept into Christian iconography in Goa, through the work of Hindu artisans or neo-converts who were employed to create Christian statuary during the early days of Church construction here.

Wagh explained that Narakasur Vadh takes precedence in Goa because Dravidian traditions are stronger in south India. The competitions for the best effigies inadvertently led to the scaling up of the festivities, creating a unique contemporary artistic display that is an outlet for local talent. Every place has its own traditions. Why they take root in a particular place is sometimes lost in history and time, said Wagh. 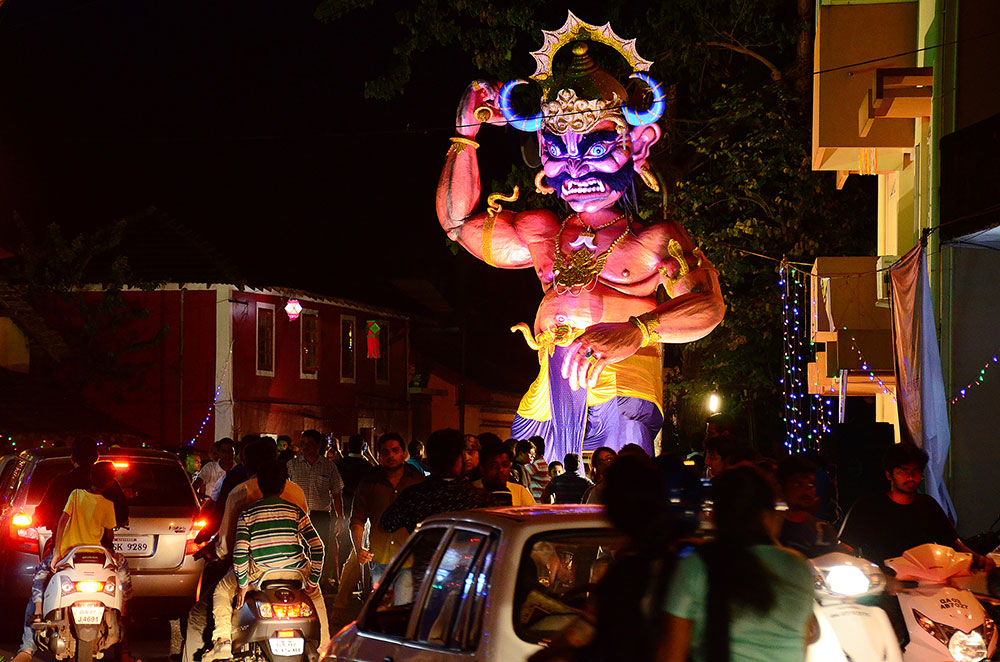 Not everyone, however, is pleased with the spread of the Narakasur Vadh tradition.

Some years ago, as the festival gained popularity, Sanatan Sanstha, the Hindutva outfit that has an ashram in the temple town of Ramnathi in Ponda, objected that the celebrations in Goa gave more prominence to Narakasur than to Krishna. In 2009, the group came under police scanner when two of its sadhaks (seekers) died when explosives stowed in their parked scooter went off just a short distance from a Diwali eve Narakasur competition in Margao’s main square, an event attended by the then Goa chief minister. A full probe was ordered at the time, and the outfit’s members were charged but acquitted by a special court in 2013.

The objections continued. In 2012, the Hindu Janajagruti Samiti, a sister concern of the Sanstha, petitioned then Chief Minister Manohar Parrikar to curb the “irregularities” around the festival, saying that donations are sought from passing cars and people. They lamented the dangerous practice of effigies being carried and burnt on the road. 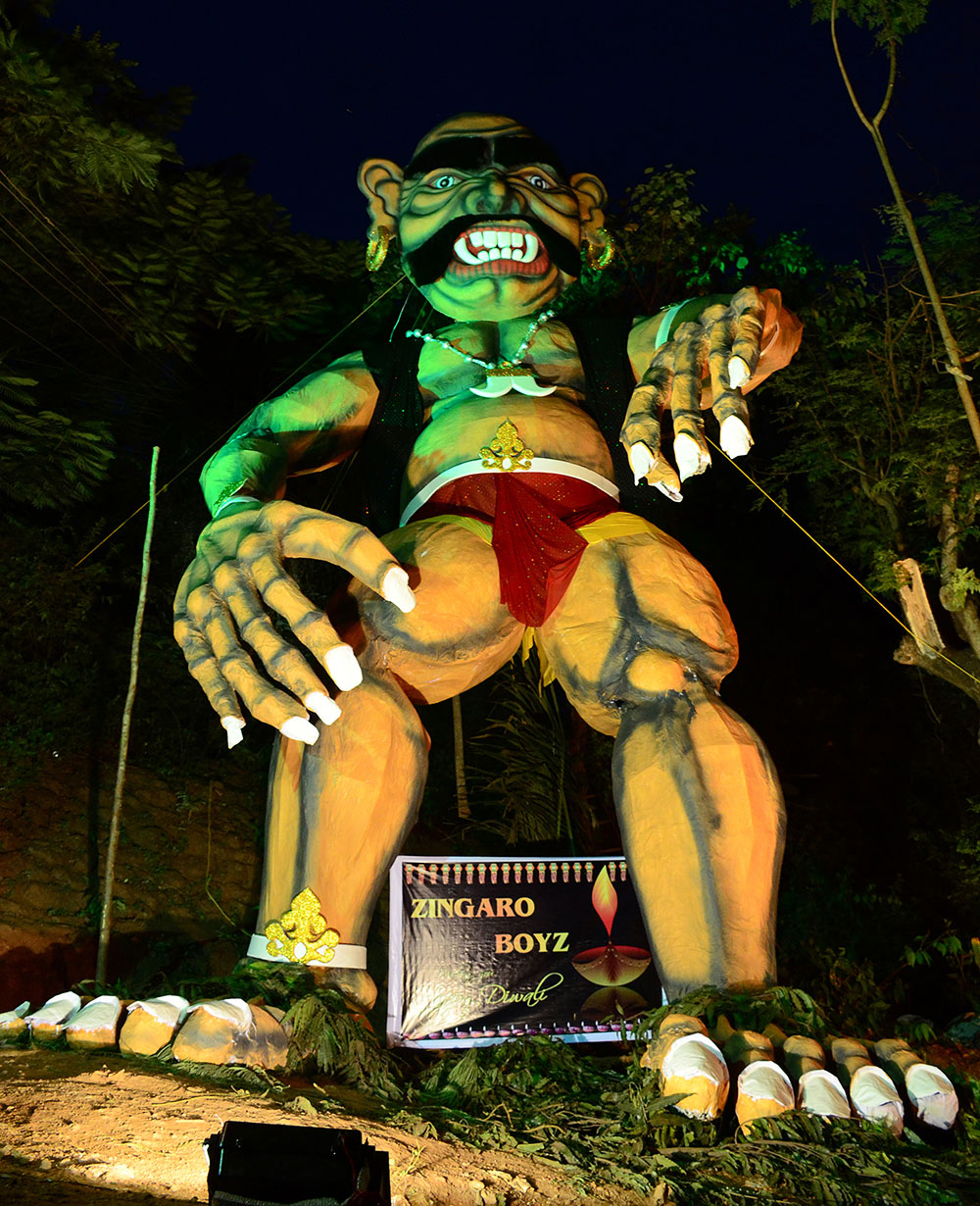 “It’s meaningless,” said Wagh. “Narakasur effigies have a huge artistic value. People are not foolish. They know the significance of the festival, that burning the effigy signifies the destruction of evil and the triumph of good. However artistic and beautiful they make their effigy, it must be burnt before dawn. They know Narakasur is not a figure of worship. They don’t need anybody to tell them that.”