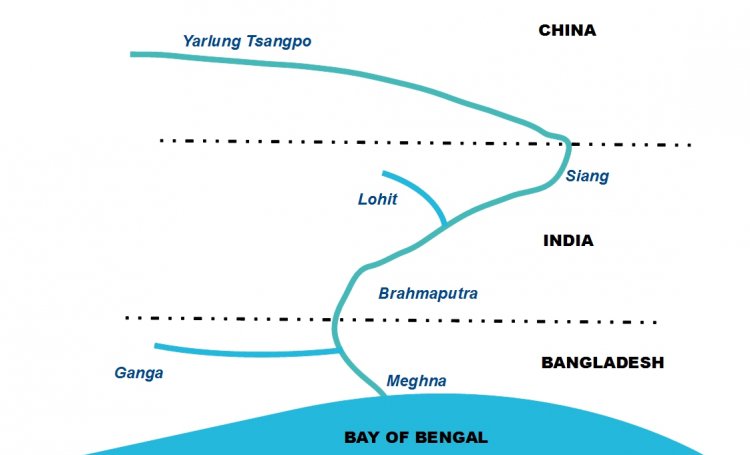 This sketch shows the Brahmaputra's many identities in its course from Tibet to the Bay of Bengal.

"Brahmaputra edge lost to China" read the front page of one of India's leading newspapers on October 17. This was followed by outraged discussions over the impact of China's dam on downstream India. The author stated, “Under the doctrine of prior appropriation, a priority right falls on the first user of river waters. China now has that right."

We beg to differ.

The Helsinki Rules and other international treaties

The sharing of water is not based on any one doctrine, but is governed by the Convention on the Law of the Non-navigational Uses of International Watercourses (1997), which are themselves based on the Helsinki Rules adopted by the International Law Association in August 1966. These state that "each basin State is entitled, within its territory, to a reasonable and equitable share in the beneficial uses of the waters of an international drainage basin". The rules require that this "reasonable and  equitable share" be decided by weighing 11 factors which are to be "considered together, and a conclusion reached on the basis of the whole". The Law also has provisions for sharing of information, planning installations, protecting the environment, and advocates cooperation between basin states. 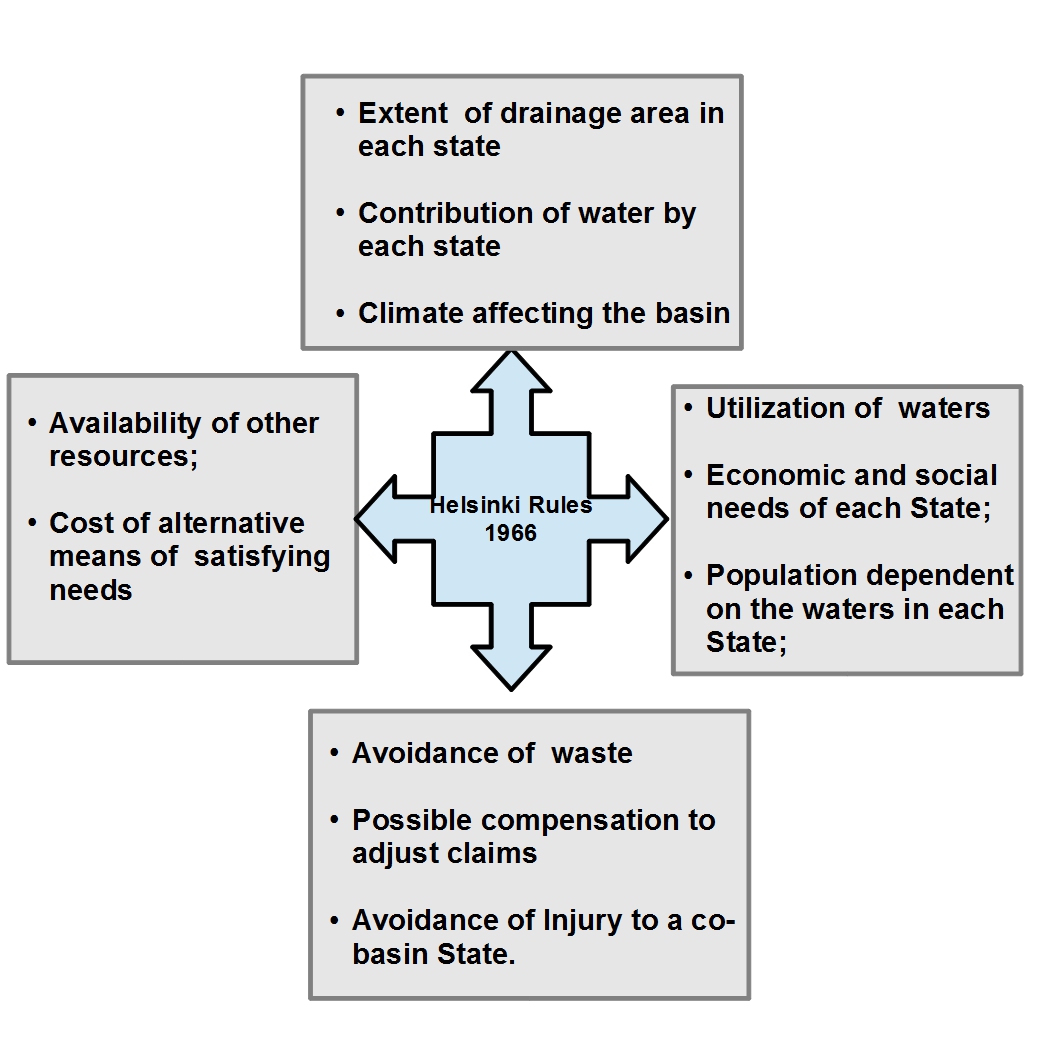 The various factors to be considered while negotiating the sharing of river water. 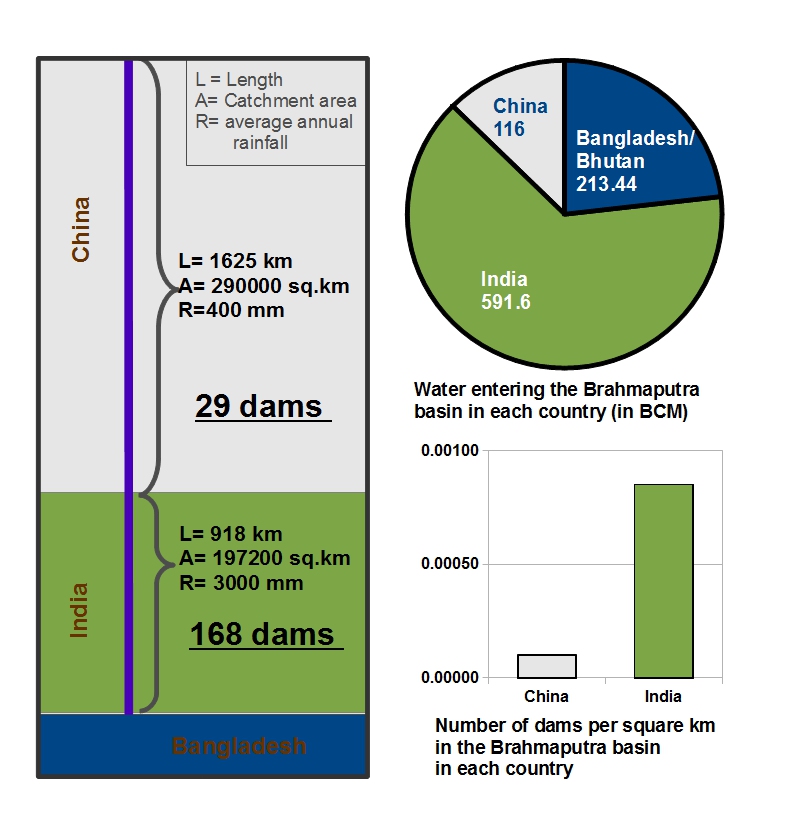 The course of the Brahmaputra and each country's interaction with it.

The Yarlung Tsangpo emerges from the Angsi Glacier in Tibet at a height of 5,210 metres and flows across southern Tibet before entering Arunachal Pradesh. Here it is known as the Siang until it meets the Lohit. It is then called the Brahmaputra. This first merges with the Ganga and then the Meghna in Bangladesh and finally empties into the Bay of Bengal.

A look at the schematic of the river tells us that while nearly half of the river flows through Tibet, its catchment there is a cold desert. So the river has comparatively lesser water flowing through it as it enters India. It is the one-third of the catchment area that is in India that receives 3,000 mm of rain annually and significantly contributes to water in the Brahmaputra.

Who 'owns' the water?

Indigenous peoples and environmentalists argue that dams are recent and for destructive uses, and so cannot be considered the primary users of the river. That distinction needs to be given to those who have, for centuries, been living with the river. Environmental flow requirements then need to be a critical aspect of an agreement to share river waters. The Law of the Non-navigational Uses of International Watercourses formulated in the 90s, does not explictly mention environmental flows, though it does caution protection of the environment.

A cursory examination of the factors influencing river sharing, based on data available from government, academic and civil sources, reveals that both nations have equal claims on the water. China has a larger proportion of the catchment area; India contributes more water. China has commissioned the first dam on the main stem; India has a larger population dependent on the river flows. Both countries have several tribes living in the basin which have strong cultural and livelihood affinities with the river.

So far, we have seen that:

* Sharing of river waters is not based on any one principle, but on a negotiated agreement that includes the discussion of several factors.

* India exceeds China in its control over the Brahmaputra in terms of the amount of water, and dependent population.

* The number of dams planned by India on the Brahmaputra and its tributaries far exceeds those planned by China.

K J Joy, director of SOPPECOM (Society for Promoting Participative Ecosystem Management), explained that India has three options if it is unhappy with the water-sharing status quo.

1. Be the mediator: India can take the initiative and set up a multi-lateral agreement including countries both upstream and downstream. In this case, such a basin-wide agreement will include China, Bhutan, India and Bangladesh. With the Mekong River Basin and its dealings with its Northern neigbours, China has already demonstrated that it is amenable to such an agreement. However, India will need to establish international credibility when it comes to sharing water. This credibility has suffered in the past due to several reasons, the most recent being its river-linking plans which it made without consulting Nepal or Bangladesh, despite both being stakeholders in the concerned rivers.

2. Bring in a third party negotiator: This is what was done in the case of the Indus water sharing. At that time, both India and Pakistan invited outside agencies. However, this internationalises the issue. Many countries, including India, prefer not to bring in external observers.

3. Go to court: India can legislate and take China to court. However, the decision of the court will be binding, something that India might not want to gamble on.

Joy said that transparency is the only possible route to avoid conflict. He illustrated this with the case of the Krishna river, where a dispute between Maharashtra and Karnataka arose over who was responsible for damages due to flood releases. Ideally, he advocates managing the river basin as a cohesive unit. This has been done in the case of the Mekong River Commission, and might improve international relations in South Asia if repeated in the case of the Brahmaputra. At the least, he advocates transparency over reservoir management to avoid disputes over floods.

China has demonstrated its willingness to share flood related data with Bangladesh. Unfortunately, we do not have a good record in this  matter. As Brahma Chellaney of the Centre for Policy Research stated in an article, “The only reliable data (regarding the Brahmaputra) is from the United Nations. The Indian government doesn’t provide accurate data to mislead the public."

This article was first published on India Water Portal.