Contribute Now
Ad
The meaning of an election emerges once it is contextualised with past results. We provide here data on turnout, party performance, various groups’ representation and on the contestants’ profile.

No surge in turnout

As many as 57.04% of Bihar's voters presented themselves to the booth. Turnout in Bihar traditionally scores below the national average, though it has been on an upward trend in recent years. It dropped in 2005, after the creation of Jharkhand, which traditionally registered a higher participation. The average turnout in Bihar’s Assembly elections (since 1962) is 54.05%, and was at its peak during the Lalu years. 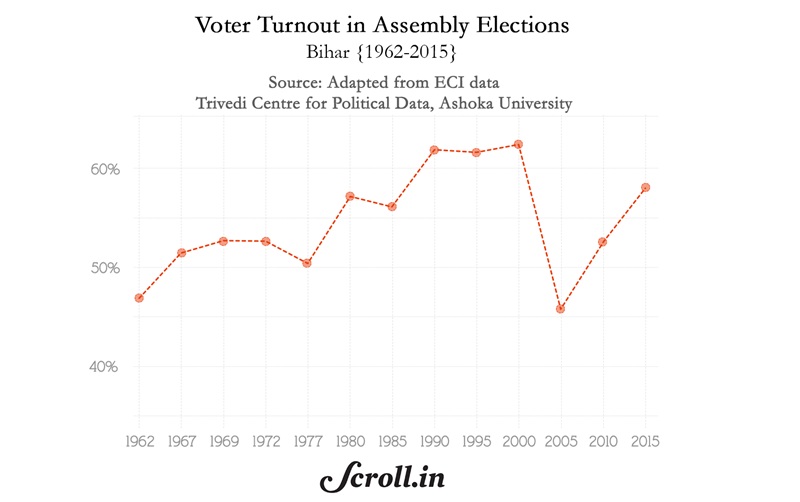 In recent state elections as well as in last year’s General elections, the Bharatiya Janata Party had greatly benefited from surges in turnout, attracting massive votes from young and new voters. The mild turnout increase here may indicate that the BJP failed to generate much enthusiasm from new voters.

Female/Male turnout data are not yet available but reports from the field indicate that women’s turnout is likely to be higher than men. This was already the case in 2010, an election in which female voters outnumbered their male counterparts for the first time. This is essentially due to the impact of the Election Commission’s voters mobilisation programmes, that have specifically and successfully targeted women and young voters. This might also be reinforced by the outward labour migration of men. 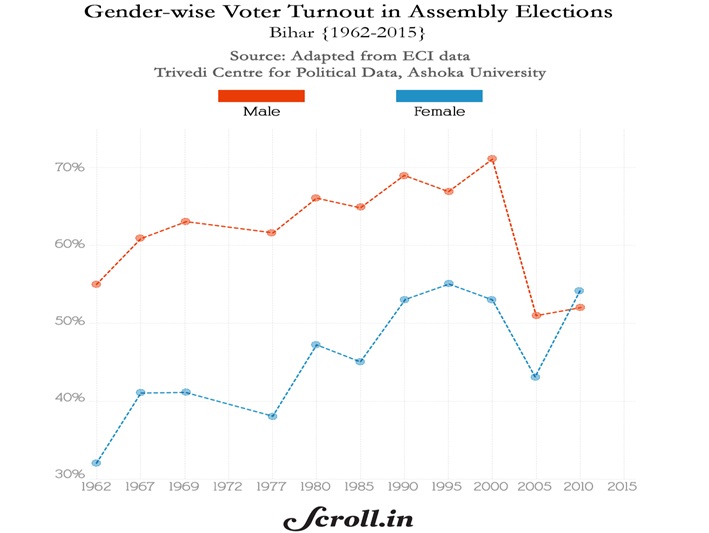 If we compare 2015 with 2014, we see that participation stands at comparable levels and is fairly evenly spread-out across the state. In both elections, turnout was higher in West Champaran and Seemanchal, two sub-regions counting a large share of Muslim population. 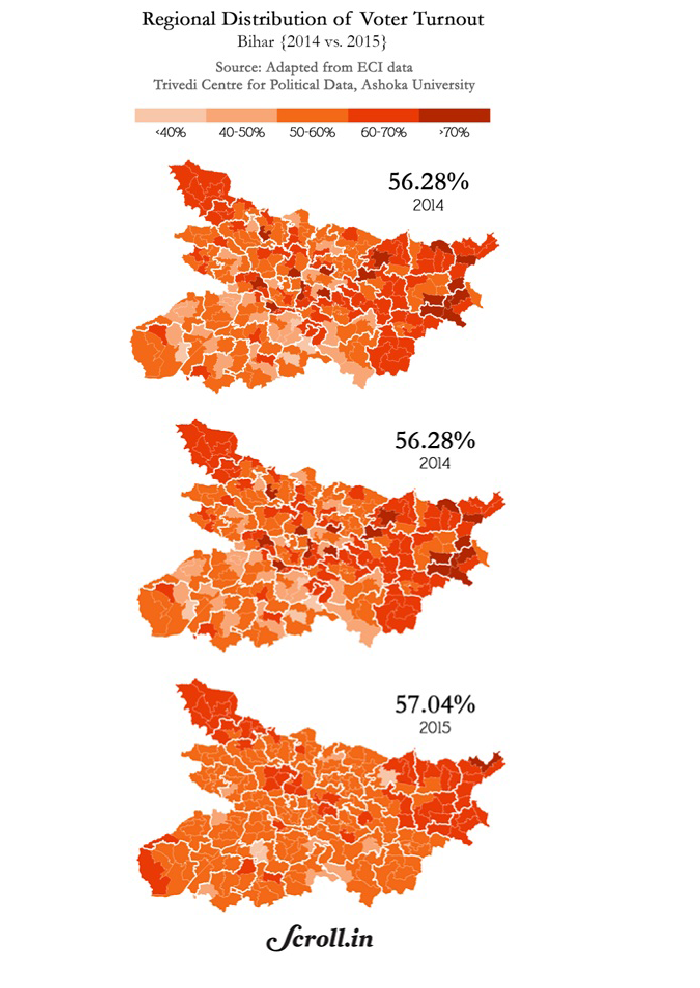 While the media attention is focused on the main contenders, these elections have registered a record number of contesting parties – 158. This is a considerable jump from previous elections, even though they did not play the spoiler effect that was anticipated by some. 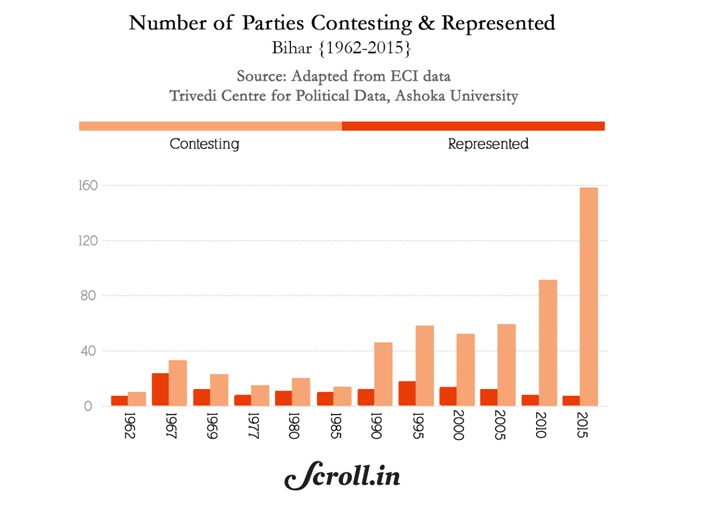 This trend is puzzling as the more parties contest, across states in India, the less vote they seem to get. At the same time, the total number of contestants has slightly decreased, essentially on account of the alliances and seat sharing agreements. 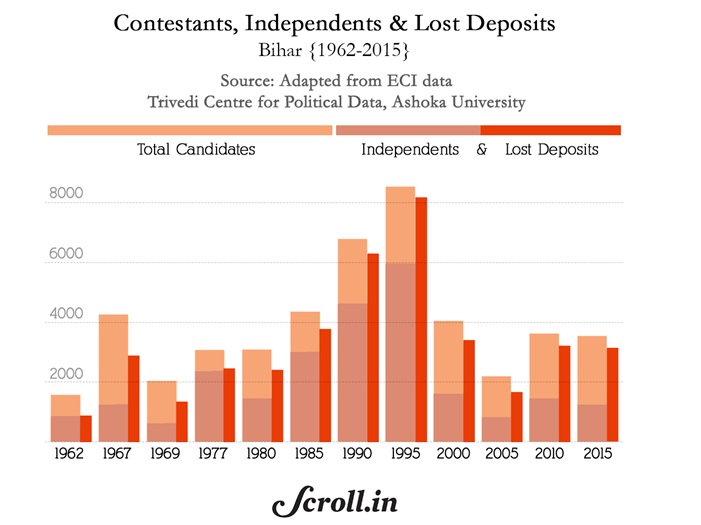 Not a closely fought election

These elections were presented as a neck-and-neck contest between two formidable alliances. A look at victory margins tells otherwise. Any candidate who won actually won decisively, across parties, with a premium for JD(U) and RJD. The JD(U) won its seat with a more than comfortable 13.6% average margin, surpassing slightly the RJD. Even the BJP won its seats with an average 7.4% margin. 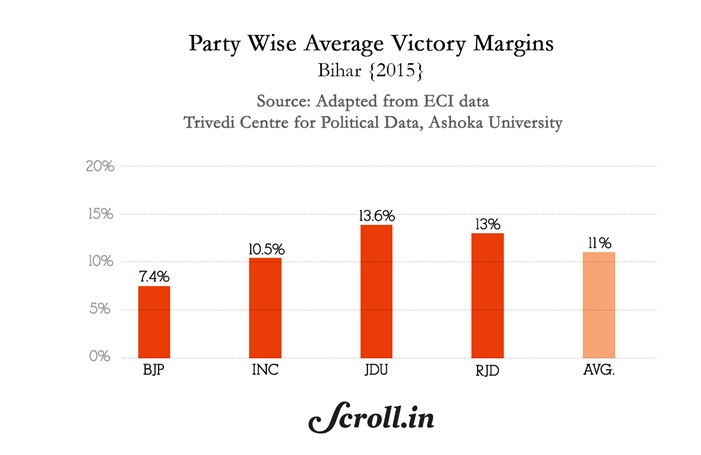 There were however some close ties. The BJP’s tally could in fact have been much lower, with 23 seats won with a margin below 5%, out of 55 such contests. 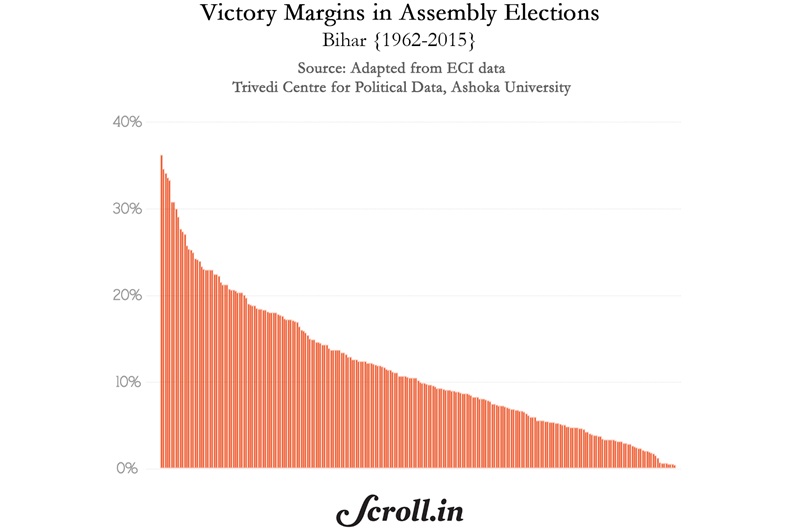 Regardless of this fact, this was not by any means a closely fought election.

Small parties did not matter

In a similar vein and for all the talk about how minor contenders would spoil the election by cross-cutting vote bases of main parties, small parties hardly mattered at all in these elections. Most candidates at the third place after the winner and the runner-up are distant thirds. The Samajwadi Party, that fielded a large number of rebels and turncoats, cost only two seats to the Janata Dal (United), in Kurhani and Muzaffarpur. The Shiv Sena cost the BJP two seats, in Lakhisarai and in Gurua. The All India Majlis-e-Ittehadul Muslimeen finished third in only one seat, in Kishanganj, which did not prevent the Congress candidate to win with a margin of 8609 votes. None of Pappu Yadav’s candidate even reached the third position.

It is a bit hazardous to place the 2015 results in a timeline, since the constitution of pre-electoral alliances alters completely the reading of various parties’ support. It is useful nonetheless to keep an eye on the long-term variation of seat share, since these can determine the fate of the government.

What the overall picture reveals is the intense fragmentation of the political space in Bihar. In terms of party performance, we see that the BJP’s rise has been constant since the early 1990s. This contrasts with other Hindi Belt states, such as Uttar Pradesh, where the BJP registered decline in State elections in recent years, after having peaked in the 1990s. 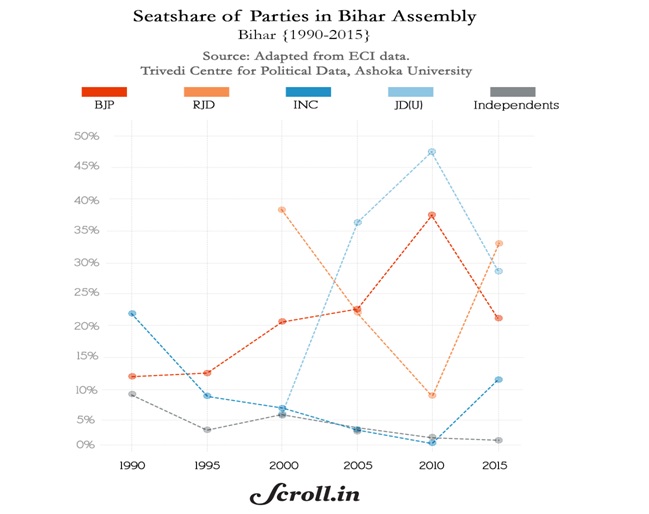 The JD(U)’s 2015 figure, as of all parties in this graph, are misleading, since it fought considerably less seats than in 2010. In the seats it contested, it received an average of 40.52% of the votes. The Rashtriya Janata Dal bagged an average of 44.2% vote share in the seats it contested, and the Congress 39.34%. These scores do not reflect their stand-alone strength, since they all benefited from transfers from their allies’ supporters and voters. In all, nearly 16 million people voted for the Grand Alliance, against nearly 13 million, for the NDA (9.3 million for the BJP alone).

The BJP’s partners in the NDA were trounced in these elections. Jitan Ram Manjhi lost his stronghold of Makhdumpur. The Lok Janshakti Party got only two seats, won by a Brahmin and a Bania candidate. The Rashtriya Lok Samta Party also collected two seats. It is of course easy in retrospect to explain their failure but the fact is that the choice of the BJP to take two narrowly caste-based newcomers and a declining subregional actor – the LJP – as partners, distributing tickets way beyond their reach, was not the most inspired choice of the party high command. No doubt that they will ponder on the reasons why their own voters did not transfer their votes to NDA partner candidates. 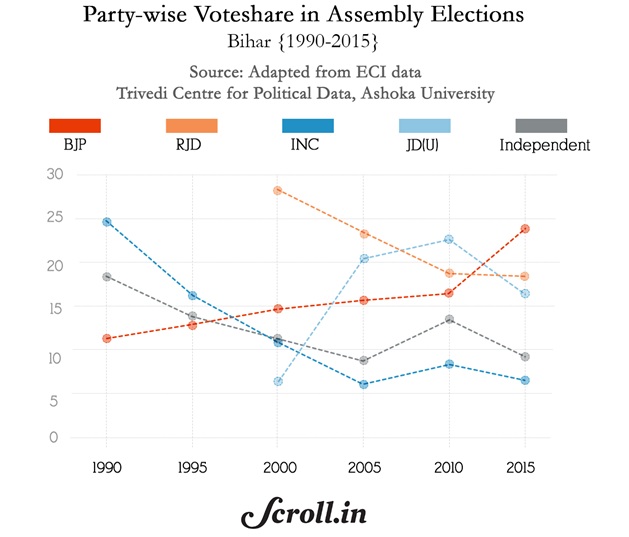 The fate of these small parties confirms a trend observable throughout

India that voters tend to concentrate their vote strategically towards strong contenders, rather than distributing them across small parties.

The return of the Backwards

Countering a 20 years trend of decline of Other Backward Classes representation, the share of OBC Members of Legislative Assembly jumps to a historic high, above 46%. The OBC had previously risen in the Mandal and post-Mandal phase but suffered a gradual decline mid-1990s, when the OBC parties split after 1997. Lalu Prasad Yadav’s claim that these election were a fight between agda and pichhda or forward and backward castes find its translation in the new face of the Vidhan Sabha. There have never been so few upper caste MLAs in the Bihar Assembly (23.9% of the MLAs). 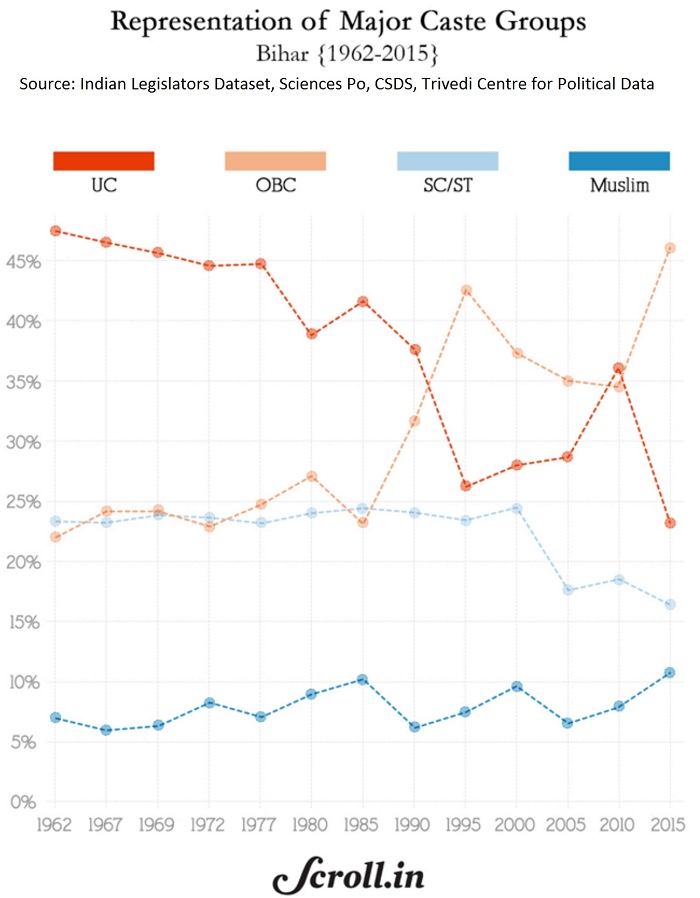 One can also note the drop of representation of Scheduled Castes, which in fact started two elections ago. Bihar was a rare case of a state that sent more Dalits to its Assembly than what was mandated by quotas. The multiplication of Dalit parties may very well have a share of responsibility for this decline, by dividing Dalit vote. The politicisation and instrumentalisation of Dalit divisions – Dusadhs vs Mahadalits – by other mainstream parties might also have played a role.

These are of course broad categories. If we break-down the upper castes, we see that no group particularly dominates the others. All of them have been on a similar gradual decline trajectory, confirmed with the recent elections. In 2010, the OBC share of representation reduced marginally from 34.98% in 2005 to 34.57%, against an increase in the share of representation of upper classes, from 28.81% to 36.21%.

Bihar contrasts here fiercely with its neighbours, where the BJP’s recent performances have translated into a sharp increase of upper caste representation. 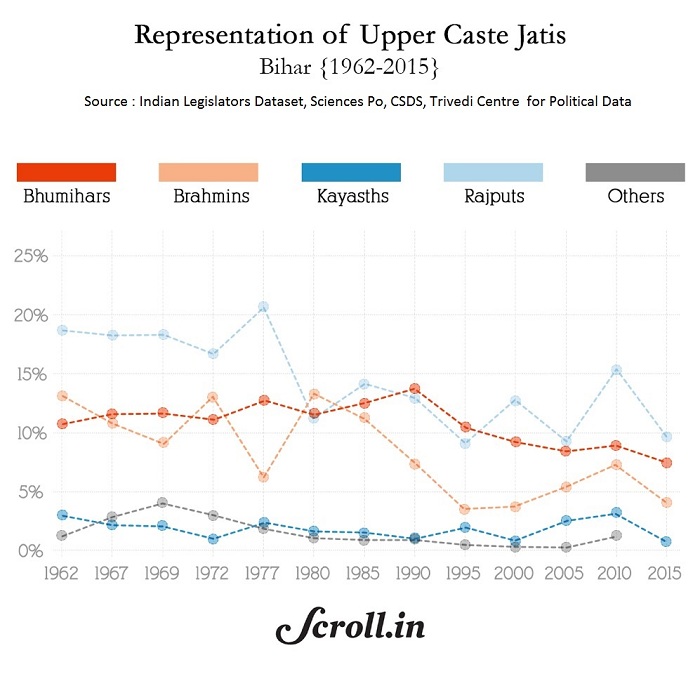 The OBC break-down is more clear in terms of trend. The Yadavs, whose presence in the Vidhan Sabha had eroded over the last 20 years, are back with a vengeance, registering their highest share of seats ever – 24.7%. One MLA out of four in Bihar is a Yadav. The RJD in particular took advantage of the seat sharing agreement to field as many Yadavs as it could – 45 – out of which 39 won. The JD(U) fielded 18, out of which 13 won. 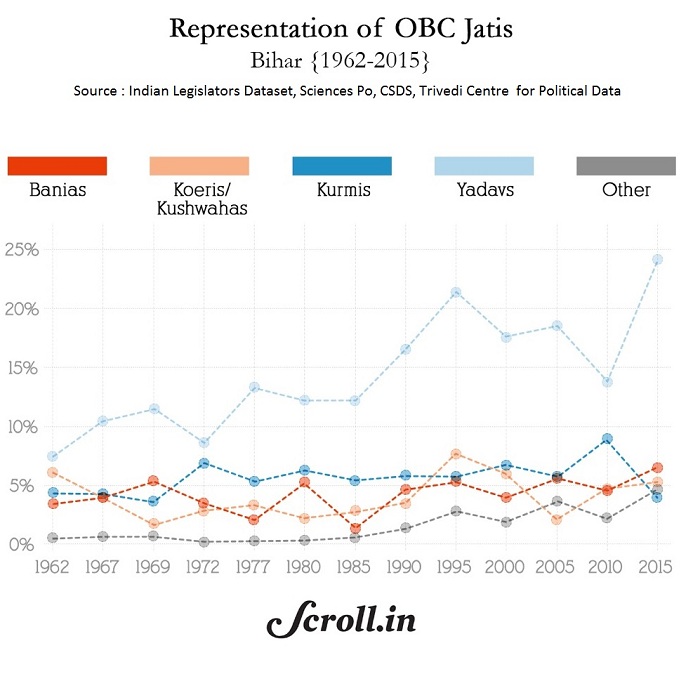 The decline of Lalu Prasad Yadav in recent years had meant more space for other OBC groups, such as Kurmis, Koeri/Kushwahas and EBCs. All these OBC groups are now in a bracket of 5% of representation. Time will only tell if this sort of arrangement, blatantly favouring one community against all others, will last or won’t generate a counter-reaction. 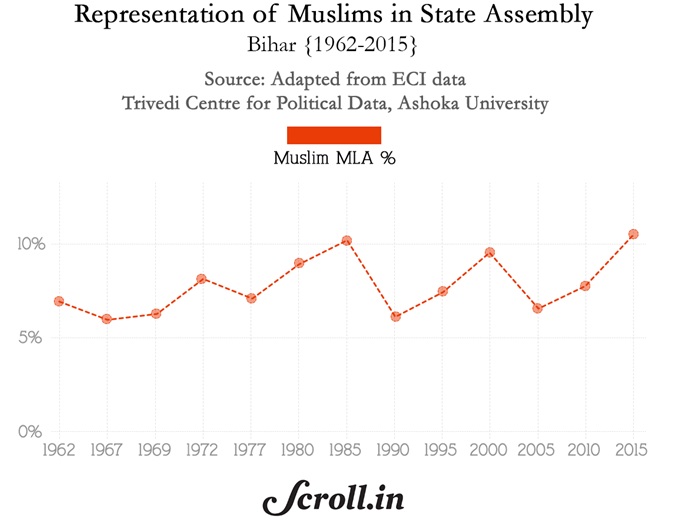 Bihar’s Muslim have always been under-represented in the Vidhan Sabha (an average of 7.74% against 15%-17% of the population, in recent censuses). Since 1962, the BJP has given tickets to 31 Muslim candidates, of which only 1 candidate won (in 2010). The RJD has given 121 tickets to Muslim candidates in toto, of which 37 have won. The JD(U) has so far sent only 15 Muslim MLAs in the Vidhan Sabha, out of 37 candidates. The Grand Alliance fielded a total of 33 Muslims, against 11 for the NDA. 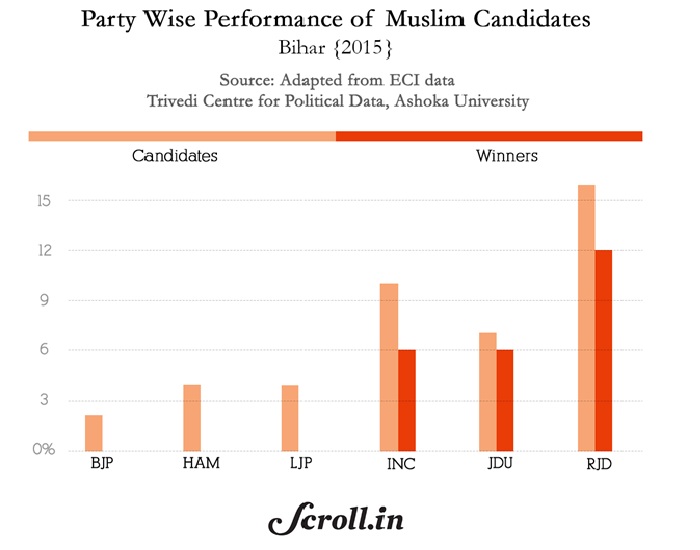 The rise of Lalu Prasad Yadav only very marginally benefited Muslim candidates, even though 12 Muslims out of 26 were elected this time on RJD tickets. Their strike rate, or conversion of candidates into winners, was however very high this year, though with low overall numbers.

The (even more) elusive women MLAs

If there was one issue to bind all the major parties in Bihar in agreement, it would be the stern opposition to any form of women’s reservation in elected assemblies.

Women’s representation has always been very low in Bihar, as in most states. Their number increased by single digit election after election but this year has marked a slight decline, for the first time since 1990. 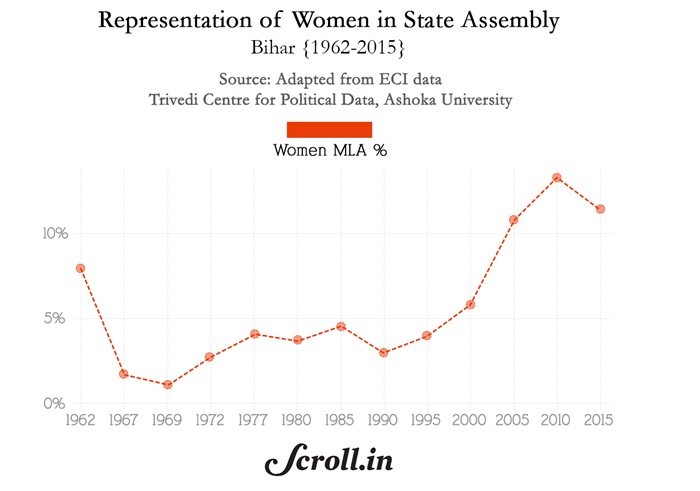 The increase of women candidate over time hardly affects their overall representation, since most women are elected on mainstream party tickets, which are heavily skewedly distributed to male candidates. In these elections, JD(U) and RJD distributed less than 10% of their tickets to women candidates. 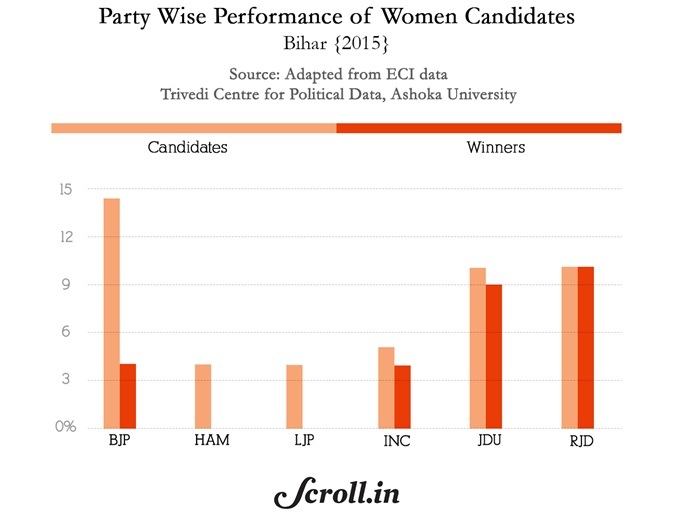 Finally, contrary to Delhi which elected last January its youngest Assembly, the age, education, assets and gender distribution within the Bihar Vidhan Sabha is resolutely average. 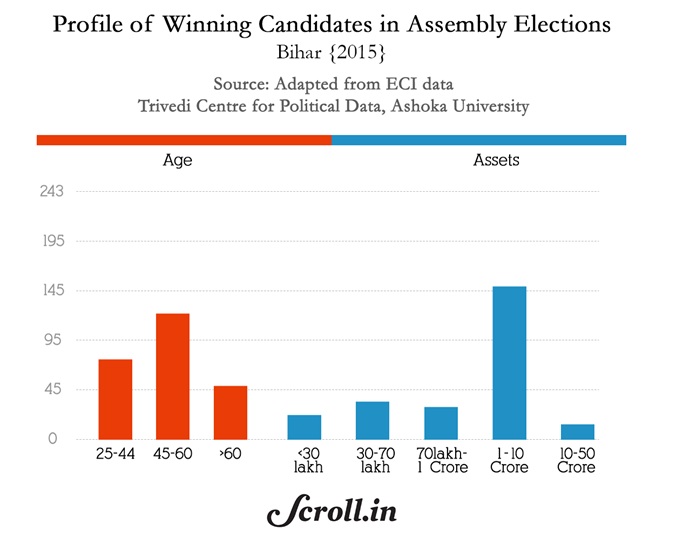 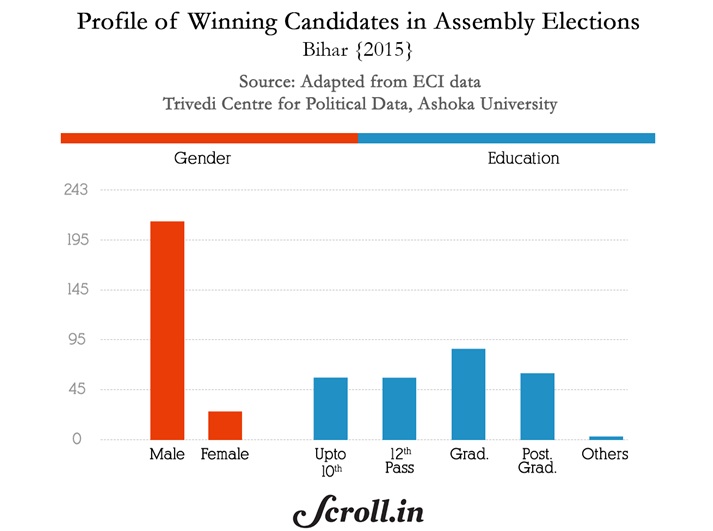 One can only stress the necessity to go beyond plain socio-demographic labels and explore the actual sociological profile of elected representatives, an exercise that goes way beyond this descriptive piece.

The 2015 Bihar results, beyond the shock they’ve induced, are indicative of interesting continuities, and of the return of past trends that the fragmentation of the political space and the rise of the BJP had recently overshadowed. The results also already show from where future potential lines of tension might come, notably the over-representation of certain groups and the under-representation of others, regardless of overall party performance.

The next thing to watch will be the unravelling of an original type of political alliance, of which the success or failure in governing Bihar will also determine its replicability beyond the state borders.