Contribute Now
Ad
The handy acronym BRIC made its debut in a 2001 report by Goldman Sachs economist Jim O’Neill, when the four nations it referred to made up just 8% of the world’s total economy. For more than a decade since, the theory that Brazil, Russia, India, China (and later South Africa) should be treated as a linked economic force representing the rise of emerging markets has driven everything from the creation of new financial institutions to billions of dollars in investment decisions from fund managers and consumer companies.

So the news that Goldman Sachs quietly shut its BRICS investment fund last month, merging the over $100 billion in assets-under-management fund with a larger emerging market one, marks what Bloomberg calls “the end of an era”.

Assets in the fund had dropped 88% from a 2010 peak, as economy after economy in the group weakened. Money flows to the fund, which is more than 50% invested in Chinese companies, were fickle in recent years, Goldman’s latest fund report shows: 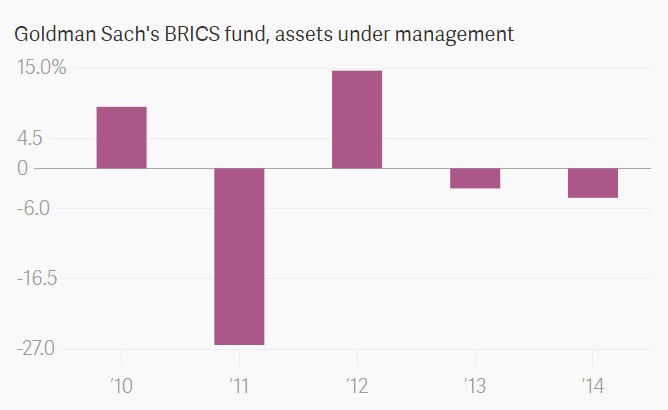 Investors, and the rest of the world, including leaders from the BRICS nations themselves, have realized that grouping together huge, politically dissimilar nations at different stages of development and industrialization isn’t a formula for fast, or even guaranteed, returns.

The BRICS nations aren’t even particularly great at doing business with one another, as Quartz reported earlier this year. Economic think tank Global Trade Alliance found that about one-third of the time that a BRICS nations’ commercial interests were harmed, another BRICS nation was doing the harming, with China the most common target:

Still, inspired in part by O’Neill’s acronym, these nations have launched a new development bank, which will be run by an Indian but based in Shanghai, and vie for projects with another new Chinese-controlled development bank. They’ve held high-powered joint talks and conferences, despite long-standing political conflicts.

O’Neill never predicted the popularity the term would gain around the world, nor recommended the institution-building that it spawned. His original proposal in 2001 was only that these nations are rising in importance, and should be taken seriously by developed nations.

In view of the expected continued relative growth of the BRICs, the opportunity should be taken to incorporate China and probably Brazil and Russia and possibly India, expanding the key body of global economic policy co-ordination to 8 or 9. It is time for the world to build better global economic BRICs.

The son of a postman from Manchester, England, O’Neill was inspired to create a the acronym after the terrorist attacks of September 11, 2001, according to this extensive Financial Times article (paywall) on the BRICS’ origin story. “What 9/11 told me was that there was no way that globalisation was going to be Americanisation in the future – nor should it be,” O’Neill told the FT. “In order for globalisation to advance, it had to be accepted by more people … but not by imposing the dominant American social and philosophical beliefs and structures.”

And it almost wasn’t BRIC. Goldman CEO Lloyd Blankfein advocated CRIBs, because China was the most important of the bunch, O’Neill told the FT, but he thought something linked to babies might be patronising.

Fourteen years after O’Neill coined the phrase, Blankfein looks to be right. China’s economy remains by far the dominant one, and in 2014, made up 13.3% of the world’s GDP – almost double the combined total of Brazil at 3%, India at 2.6%, and Russia at 2.4%.

From Chinese milk to Indian chocolate, behind the world's fast-expanding markets