The Rashtriya Janata Dal led by Lalu Prasad, which emerged as the largest single party in the Bihar assembly with 80 seats, has the highest number of MLAs (49) with criminal cases pending against them.

The RJD is followed by its Mahagathbandan (Grand Alliance) ally the Janata Dal (United) with 37 MLAs who have criminal cases pending against them.

An analysis of affidavits filed by 3,450 candidates for the 243-seat assembly showed that 1,038 (30%) candidates had declared criminal charges, according to data sourced from Association for Democratic Reforms, a non-profit think-tank working on electoral and governance reforms.

As many as 796 (23%) candidates had declared serious criminal cases including charges related to murder, attempt to murder, communal disharmony, kidnapping and crimes against women lodged against them. 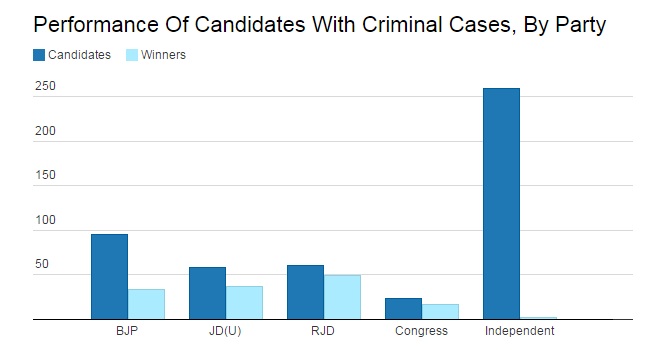 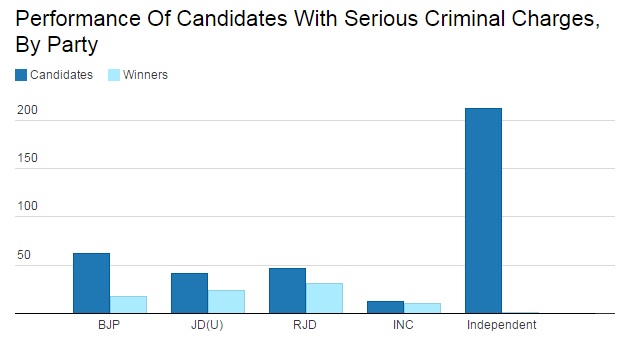 The RJD again has the highest number of MLAs (31) with serious criminal charges, including attempt to murder, against them 31 followed by the JD(U) with 24.

Ajay Kumar, an independent candidate from Kumhrar constituency, had declared eight charges related to murder in his affidavit. Kumar lost the election.

Visheshwar Ojha, a BJP candidate from Shahpur constituency, had declared 10 charges of attempt to murder (IPC Section-307). Ojha was the runner-up in the constituency by polling over 54,000 votes. The election was won by the RJD’s Rahul Tiwary with over 69,000 votes.

The average assets per candidate who contested the Bihar assembly elections of 2015 is Rs 1.44 crore.

The average asset per candidate for the 157 BJP candidates was Rs 2.74 crore.