Become a Member
Ad
Several young women photographers, in India and abroad, have created a stir in the international photography industry after speaking out against multiple incidents of alleged sexual harassment by a photo editor, who has now been sacked from his position as a co-director of a photo festival in Delhi.

While the women have not yet registered police complaints, they have been using social media for the past few days to recount personal experiences of alleged harassment by Manik Katyal, the editor-in-chief of photography magazine Emaho, headquartered in Delhi. Most of the online complainants have worked as junior photographers or interns at the publication, and some of their allegations of sexual harassment date back to 2012 and 2013.

While most of the women claim to have experienced verbal harassment online or in person, some have also made allegations of physical abuse and coercion.

On November 7, a group of photographers also created a blog titled "I was harassed by Manik Katyal", on which at least 20 women have posted personal “testimonials” in the form of write-ups, comments and screen shots of Facebook chats in which Katyal allegedly behaved in a lewd manner.

In response to the flood of allegations on social media, Katyal has now been asked to step down from his role as one of the three directors of Just Another Photo Festival, a photography festival that took place in Delhi in September. In a Facebook post on Monday, festival co-directors Poulomi Basu and CJ Clarke said, “Such allegations are a serious matter and this action will allow these allegations to be addressed and for the rule of law to be followed and any appropriate action taken. It is until such a time that Manik’s involvement will cease.”

According to claims in various posts on the blog, Katyal made a series of inappropriate comments to women, including asking them to give him oral sex and suggesting that he join them in the shower or in bed. A woman identifying herself as a “European photographer” claimed that he used “trashy and raw” language with her while making “sexual propositions” and “graphically describing sexual acts” during professional discussions.

A post by a former Emaho intern alleges that three years ago, Katyal abused his position as her boss by insisting she meet him for work at his hotel room, where he attempted to force himself on her:

“Even after I had let him know that I was not comfortable going to his place as I did not know him much, he insisted that I do so. Being a timid, young girl at that point, I did go. Did not want to offend him – I took him as someone superior to me in rank.
When I was in Manik’s room he offered me a drink. I did not want to drink, but he coerced me into drinking anyway. Then, without asking for my permission he started to get physical with me and chose to ignore the fact that I have said NO a several time... I managed to stop him after a while and left his place.”

Another post by an anonymous woman, who worked at Emaho in 2012, also describes a coercive physical encounter:

“...he knew I had moved to the same city as him so he kept messaging and calling under the pretext of work. So, I finally went to meet him after work. Being young, naive and alone in a new city, I was an easy target I guess. He offered me a drink. I said no. He coerced me into drinking saying “Don’t be a prude. Just relax!”...He made a pass at me and I told him I’m uncomfortable. I do not want to do this. I told him I have a boyfriend. This is not okay. I said I want to leave. He said have another drink and he’ll drop me home. It got really late and I knew I couldn’t go back to the PG which was pretty far away. I had never felt so alone and scared. It was quite traumatic... I was ashamed. I had bruises on my lips. I wish I could have done something then. All I ended up doing was blocking him on all my social media.” 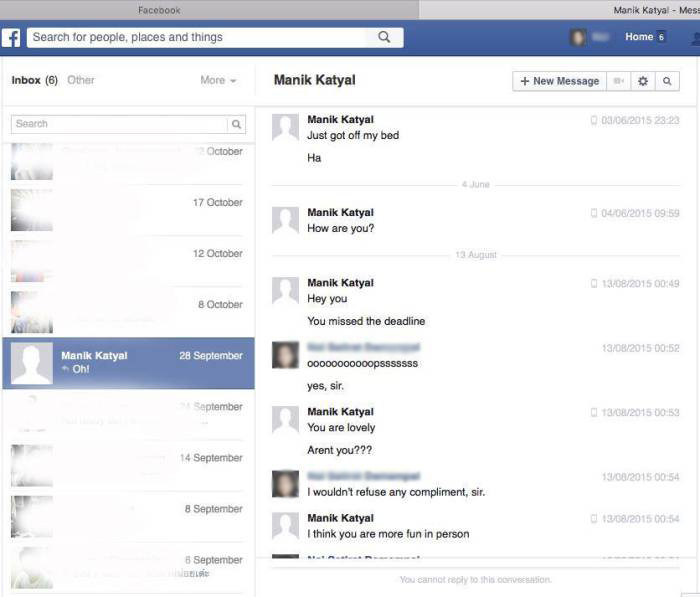 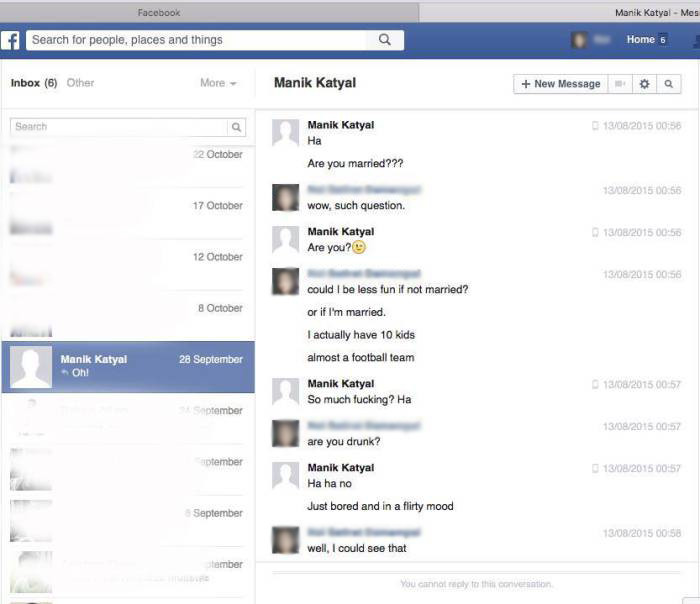 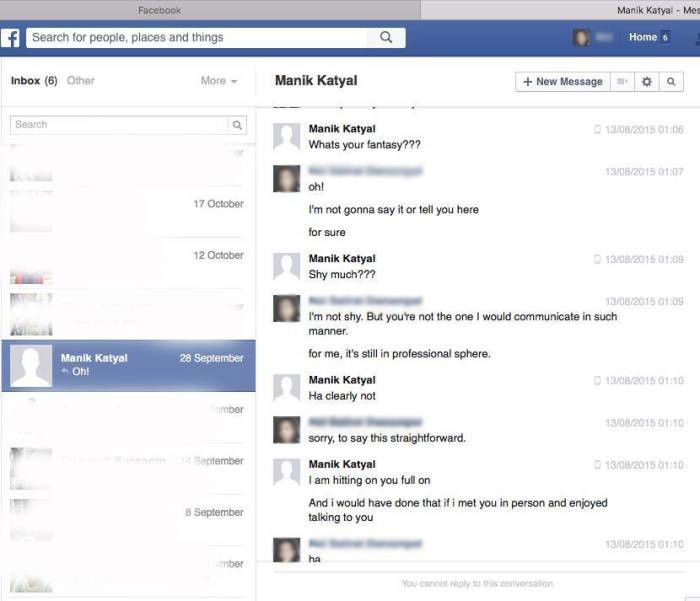 According to another post by a woman who allegedly faced harassment on Facebook, Katyal was using his position as a photo editor to justify unwanted remarks:

“In all honesty, Manik Katyal’s “cute ass” remark to me on Facebook chat didn’t offend me...What did offend me, and still does, is the line that follows my displeasure in that chat — “I am a photo editor so couldn’t keep it in”. That is misuse of power now. You don’t justify a comment on my bum by talking about your profession, like your seniority should intimidate me, like this is a reminder to me that I should take it as just ‘banter’.”

Another woman offered an explanation for why she – and most other women – felt they were not in a position to complain or openly object to the alleged harassment: It "meant keeping my career in photography intact”.

Scroll.in spoke to several Indian photographers who did not wish to be identified, but claimed they had been hearing about “such incidents” from various women for a few years, but no one had filed complaints or spoke about it publicly. The atmosphere changed when British photographer Colin Pantall published a blog post on sexual harassment in photography on October 1.

Without naming any particular offenders, Pantall discussed the problems that women in the male-dominated photography industry face when there are no safe outlets for them to report sexual harassment and when they fear that complaining about people in more senior positions would jeopardise their careers.

As the blog post got shared internationally, some women photographers responded by posting their own experiences with harassment, making veiled references to Katyal. “Some of the Indians soon figured out who was being spoken about, and it spiralled from there,” said a male photographer from Mumbai who did not wish to be identified. This photographer claims he personally knows at least four women who have allegedly been harassed by Katyal, three of whom have not yet spoken out on social media.

On October 12, Katyal published a Facebook post claiming that his “social media and email servers” had been “compromised” without his knowledge, and that “unscrupulous persons” had been “sending out offending material, posing as me, for several months”.

In their statements on the "I was harassed by Manik Katyal" blog, many women claimed they found Katyal’s post difficult to believe. “But the main trigger that pushed many women to speak out publicly was when Emaho set up a sexual harassment committee,” said another male photographer who started the complaints blog along with a few colleagues.

Emaho made the announcement on November 4 on its website, stating that it had “pioneered the effort of being the first Indian online magazine to constitute an independent committee which is known as ‘Prevention of Sexual harassment and discrimination Committee’”.

“Katyal started getting praise from some people in the international photography community for starting this committee, which made many women indignant,” said the blog co-founder, who believes social media is a natural platform for young adults to vent their anger and rally around each other across international boundaries. "That is when women began to openly name him in their allegations on social media."

Despite several attempts to reach him, Katyal did not respond to Scroll.in's emails, phone calls or messages. Meanwhile, women who claim to have faced harassment are now exploring the options of filing formal complaints either with the police or the National Commission for Women.

The social media and blog campaign against Katyal has, however, already begun to garner responses from sections of the international photography industry.

Even as Katyal was asked to step down from Just Another Photo Festival, a Dutch photography publishing house called Schilt Publishing announced that it had heard of some “serious and disgusting allegations against a certain photo editor” and that it would “not ever tolerate the abuse and harassment of women photographers, or photographers of any gender, for that matter”.

The controversy has also sparked off serious discussions about sexual harassment in the industry and the lack of avenues for those who wish to report it.

“These are things that one usually gets to hear in whispers at first,” said Sohrab Hura, one of only two Indians to be made a member of Magnum Photos, an acclaimed collective of international photographers. “People who experience harassment should be able to speak about it freely without any fear of repercussions, but there is hardly a system in place that addresses this. I guess that’s why people stay quiet.”

Poulomi Basu, one of the directors of Just Another Photo Festival, believes that a formal system to deal with sexual harassment in the globalised photo industry would be difficult to set up. “More realistic would be a voluntary code of conduct to which organisations could sign up, but that in itself would be no guarantee that any such instances would be reported by victims and appropriately dealt with,” she said. Nonetheless, Basu believes that the only appropriate way to address harassment complaints is to go through the due process of law. “Trial by media will never be a replacement for it.”

According to Paroma Mukherjee, a photo editor from Delhi, most of the women who have made allegations about Katyal are young, and senior photographers like her have offered their support to ensure that this does not become a “witch-hunt on a blog”. “In this case, the photo community is undivided in giving support to the young women,” she said.

Being woke is profitable: How ‘Teen Vogue’ made waves this year