Contribute Now
Ad
One of the most intriguing items in the British Library Persian manuscripts collection is a small unexceptional looking volume which contains a personal record, written in his own hand, of 37 dreams of Tipu Sultan, who was the ruler of Mysore from 1782 till his death in 1799. 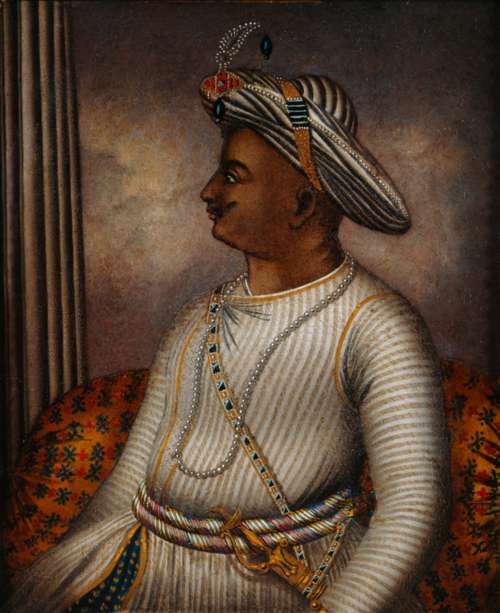 The manuscript was presented to the Court of Directors of the East India Company in 1800 by Alexander Beatson on behalf of Governor-General Marquess Wellesley, after the fall of Seringapatam in 1799. The story of its discovery is recorded in Beatson’s signed and dated note at the end of the volume:

This register of the Sultan’s dreams was discovered by Colonel William Kirkpatrick, amongst other papers of a secret nature in an escritoire found in the Palace of Seringapatam. Hubbeeb Oollah, one of the most confidential of the Sultan’s servants, was present at the time it was discovered. He knew that there was such a book of the Sultan’s composition; but had never seen it, as the Sultan always manifested peculiar anxiety to conceal it from the view of any who happened to approach while he was either reading or writing in it. 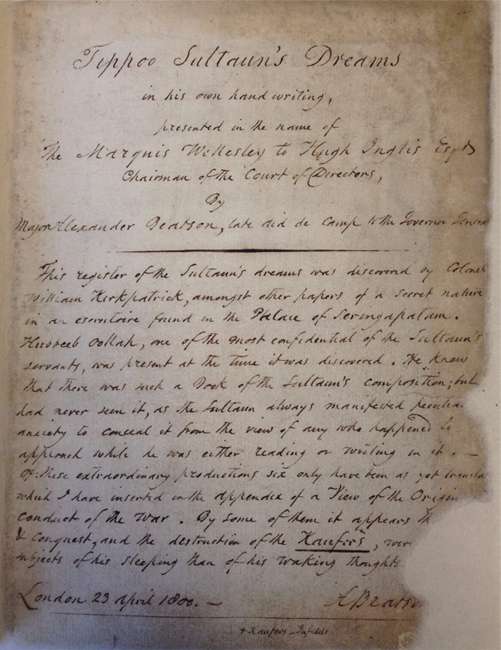 “Tippoo Sultaun’s Dreams in his own handwriting, presented in the name of The Marquis Wellesley to Hugh Inglis Esqr. Chairman of the Court of Directors, by Major Alexander Beatson, late aid de camp to the Governor General” (British Library IO Islamic 3563, f. 29v).

The journal contains altogether 37 dreams dating from between April 1786 and January 1799, just a few months before Tipu Sultan's death. They occupy the first 16 leaves of the volume and are followed by 166 blank folios, with the final part of the volume taken up with related memoranda.

The dreams were written perhaps hurriedly in what H Ethé (no 3001 in his printed catalogue) describes as “a fearful Shikasta”, and contain numerous spelling errors. Only a few of the dreams are described as having been written down on waking. Most were recorded afterwards and they are not all in chronological order. This arrangement suggests that the notebook was intended as an ongoing project containing a selection of Tipu’s most significant dreams, starting, perhaps, around 1795 (Brittlebank 2011, p 167).

The dreams are dated according to Tipu’s own lunisolar calendrical system, which used new month and year names based first on abjad and then on abtath values. The era, termed mawludi, was calculated from a date which was presumed to be the date of the Prophet's spiritual birth, 13 years earlier than the hijra. Another innovation was to write the numbers from right to left – logical, however, in a script which reads the same way.

The dreams cover a wide variety of topics, but the majority reflect Tipu’s preoccupations with his enemies. Some are seen as indicating success and victory. Others relay encounters with the Prophet, his son-in-law ʻAli, and important religious and literary figures such as Saʻdi and Jami, whose presence may be seen as a legitimising force.

Considering the importance of divination and predicting the future in pre-modern Islam, the existence of this journal is entirely consistent with Tipu’s particular interest in the interpretation of dreams and bibliomancy. It has sometimes been regarded as something of an esoteric oddity, but should be viewed, rather, as a serious attempt to make sense of events in a historical context.

A selection of Tipu’s dreams follows:

Dream 12: The message
This dream dates from 1786 during the Maratha-Mysore war (1785-1787) when the Marathas, who had established a military alliance with the Nizam of Hyderabad, sought to recover territories they had lost in previous conflicts. 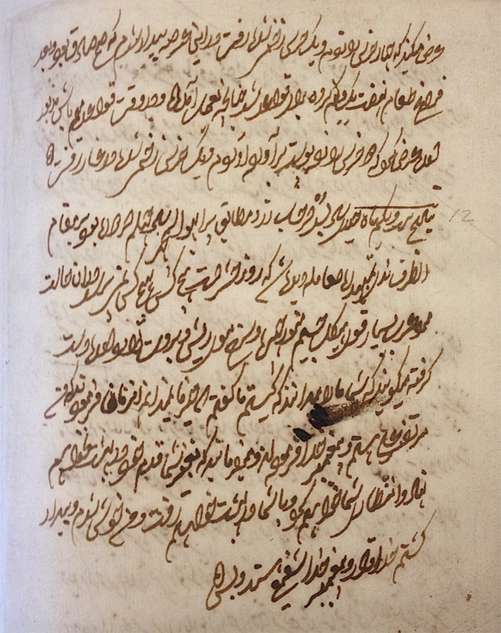 On the 21st of the month Haidari [month 6], of the year Busd in accordance with the Zar evaluation [ie. the new abtath system], the fortieth year of the cycle [ie. September. 1786

], at the place where I had halted, on the farther side of the Tungabhadra, I had this dream: It appeared to me as if it was the Day of Judgement when no one would be interested in anyone else. At that time a stranger of great strength and commanding stature with a bright face and red beard and moustaches came to me and taking my hand in his, said to me : “Do you know who I am?” I told him I did not. He then said to me, “I am Murtaza Ali and the Messenger of God has said and is still repeating it that he would not set his foot in paradise without you and would wait for you and enter the paradise with you.” I felt so happy and woke up. God is all powerful, and the Messenger is the intercessor. This suffices.

Dream 13: A woman in a man’s dress
Tipu had crossed the Tungabhadra river in August 1786, and on October 1 made a surprise attack with only 300 men on the Maratha camp under general Haripant Phadke. The next day the Marathas were forced to retreat (Muhibbul Hasan, pp. 112-5). 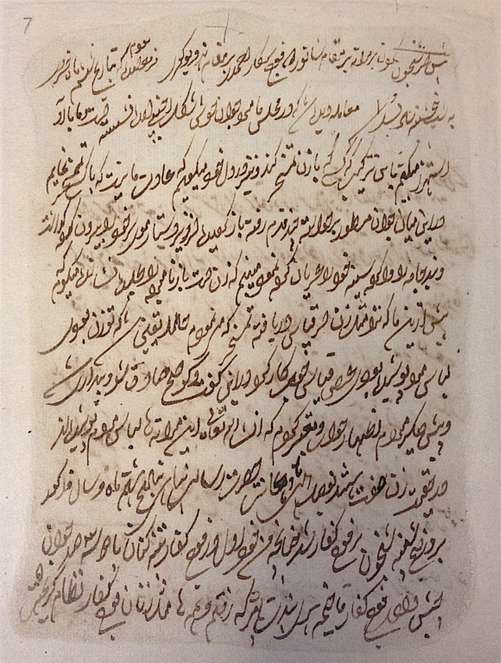 Prior to the night attack upon the Marhattas at Shahnur by the side of Devgiri, on the 6th of the month Khusrawi [7th month], of the year Busd [yr. 40, i.e. October 1786], I had a dream: It seemed to me as if a handsome young man, a stranger, came and sat down near me. I passed certain remarks in the manner in which one might, in a playful mood, talk to a woman. I then said to myself: “It is not my custom to enter into playful discourse with anyone.” Shortly thereafter, the youth rose, and walking a few paces, returned to loosen his hair from beneath his turban, and opening the fastenings of his robe, displayed his bosom, and I saw it was a woman. I immediately called and seated her and said to her: “Whereas formerly I had only guessed you were a woman, and I had cut jokes with you, it is now definite that you are a woman in the dress of a man. My conjecture has come true.” In the midst of this conversation the morning dawned, and I woke up. I conveyed the contents of the dream to other people and interpreted it thus: That please God those Marhattas have put on the clothes of men, but in fact will prove to be women. By the favour of God and the aid of His Messenger, on the 8th of the month and the year above mentioned, on the morning of Saturday, I made a surprise attack upon the army of the unbelievers. Advancing with two or three hundred men, I myself penetrated the camp of the unbelievers, crushing them as I went, as far as the tent of Hari Pant Pharkiah, and they all fled like women.

Dream 26: The expulsion of the English
The Third Anglo–Mysore War ended in 1792 with the Treaty of Seringapatam, and left Tipu Sultan attempting to rebuild his empire. Although they had not been much help to him, Tipu continued to look on the French as allies and was no doubt encouraged by their increasingly hostile anti-British and pro-invasion policies from 1796 onwards. 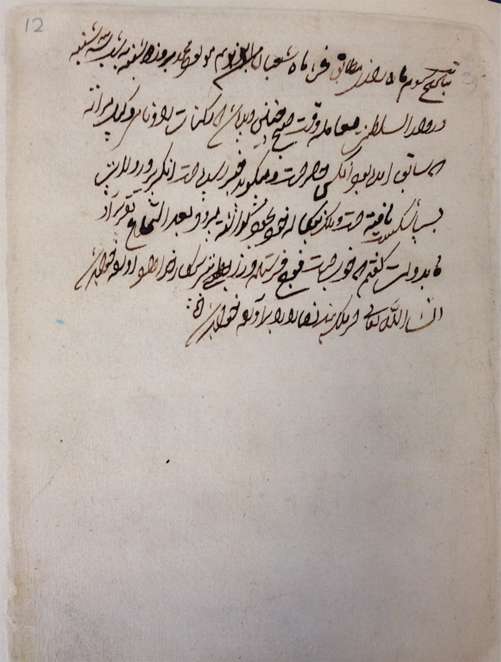 On the 3rd of the month Razi [month 11], corresponding to the 1st of the month of Shaʻban, 1224 [January 1797], from the birth of Muhammad, on Monday, the night of Tuesday, at the metropolis, in the early hours of the morning, I had a dream: Raghunath Rao, the Marhatta agent, who had been to me before, appeared before me and said, “The English have suffered a crushing defeat in Europe and are now on the verge of leaving Bengal voluntarily.” On hearing his statement, I said, “That is fine, I will despatch troops as well as money; if God wills, the Nazarenes shall be expelled from India.”