Become a Member
Ad
It is common enough to hear politicians talking about budget cuts and the need to attack subsidies. It's a little more unusual, however, when those sentiments are being expressed by the kings of the Gulf's oil-rich emirates, not least because those countries are home to a massive number of Indians.

That's why it's alarming to hear the rulers of the United Arab Emirates, Qatar, Kuwait and Oman in the last few weeks warning their citizens about the need to tighten belts. Meanwhile, things look even worse for the alpha male of the pack: The International Monetary Fund has warned that Saudia Arabia could burn through its financial assets in just five years, if oil prices stay as low as they currently are. 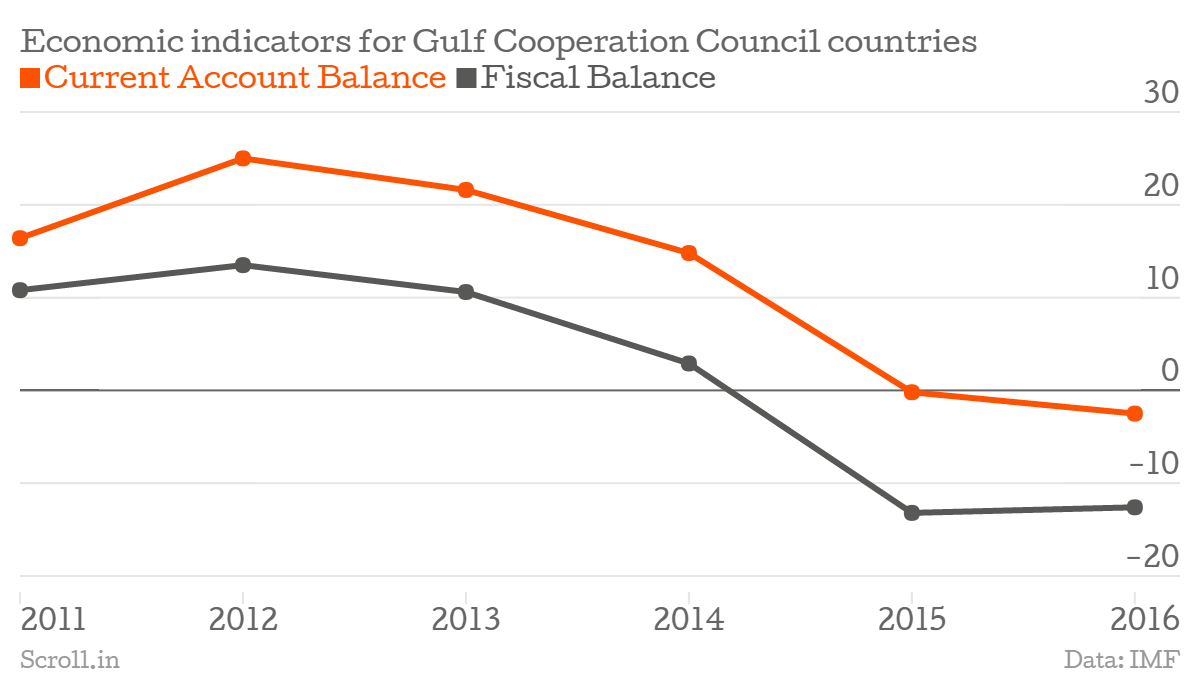 And these economic worries aren't going away any time soon. While oil prices are expected to rise a little bit over the next few years, they are unlikely to get back to the peaks of 2014, when they had hit $114 a barrel. The IMF forecasts prices gradually rising to $63 by 2020. That some forecast suggests that, based on current spending, the Gulf countries would need prices to be closer to $75 – and more than $100 for Saudi Arabia – if they just want to break even.

For the first time, aside from the Dubai crash, Gulf countries are having to cut subsidies, reconsider the way they charge taxes and as a result deal with the potential of mass layoffs. In a region with 7 million Indian citizens, who send home lakhs and lakhs of rupees ever year, this situation should be alarming.

India, as the world's largest receiver of remittances, is in many ways heavily dependent on these expatriates particularly in boosting its foreign reserves. The money sent home is felt most acutely in Kerala, where remittances are equal to a third of the state's domestic product. According to researchers S Iruduya Rajan and KC Zacharia:

Any shock to Gulf economies will hit Kerala hard.

Anecdotal evidence from the Gulf countries already confirms the effect on expatriates, with talk of people losing their jobs. Even if layoffs don't end up affecting a massive number of people, companies are unlikely to offer increments and some may even cut salaries or perks, both of which took place, like the restructuring at the state-run Qatar Petroleum earlier this year.

The draconian labour laws of these countries make things worse, by limiting the freedom for unhappy employees to look for other options. Those working in the labour sector have almost no negotiating power, since it is illegal to unionise or even demand better pay, and even those in the middle-class have little lee-way in terms of moving from one company to the other to allow more efficiency in the market.

This means that most Indians affected by the economic troubles in the Gulf will either be stuck with what they have, or will have to return to India if they were to look for something else, a prospect that brings with it plenty of additional issues.

"No other part of the world depends on migration and remittances as a source of economic development than the south Asian region, where a large number of migrant workers have found substance in their dreams and back home their hearths burn," wrote Vinoj Abraham and S Irudaya Rajan, in a 2011 paper about the 2008 economic crisis' effect on migrants.

"The crisis, in this case, the decline in the GDP growth in general in the Middle East region led to the loss of jobs, and means of livelihood to many workers from south Asia. However, the loss of job in the gulf is compounded by the fact that in their own home countries the rehabilitation and reintegration of these workers is tedious and often the returnees are thrust with forced choices."

If oil prices stay where they are, and the expected return migration does start to happen, India, and Kerala in particularly will have to be prepared for a very different future.