The Bharatiya Janata Party had fielded eight candidates from these 22 families. There were six from the Lok Janshakti Party, five from the Janata Dal (United), three each from the Rashtriya Janata Dal and the Hindustani Awam Morcha, one from the Samajwadi Party and one independent candidate.

The first family of Bihar politics – Lalu Prasad Yadav, two sons and a daughter – recorded a 100% success in the seats it contested. Tej Pratap Yadav, the elder son of the RJD chief Lalu Prasad, won from Mahua constituency by defeating the HAM’s Ravindra Rai by a margin of 28,155 votes.

Tejasvi Pratap Yadav, Lalu’s second son, won from Raghopur by defeating the BJP’s Satish Kumar Yadav by a margin of 22,733 votes. Satish Kumar, earlier in the JD(U), had defeated Lalu’s wife Rabri Devi from the same constituency in 2010. 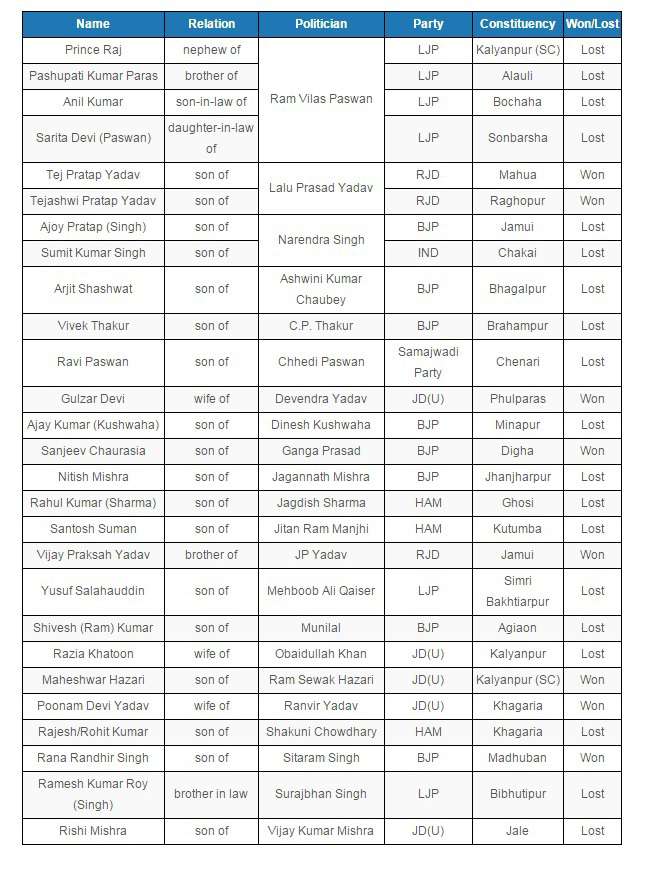 Santosh Suman, the son of former chief minister and current HAM chief Jitan Ram Manjhi, lost to Rajesh Kumar of the Congress by a margin of 10,098 votes.

Maheshwar Hazari, son of former JD(U) legislator Ram Sevak Hazari, won against the LJP’s Prince Raj with a margin of over 47,000 votes. Prince Raj is the son of Ram Chandra Paswan, brother of LJP president Ram Vilas Paswan who is also the Union minister for consumer affairs, food and public distribution.

Pashupati Kumar Paras, brother of Ram Vilas Paswan, lost to the RJD’s Chadan Kumar by 24,470 votes in their bastion at Alauli.

Paswan’s son-in-law Anil Kumar lost to Beby Kumari, an independent candidate, in Bochaha by a margin of 60,337 votes. Daughter-in-law Sarita Devi lost to the JD(U)’s Ratnesh Sada by 53,763 votes in Sonbarsha.

Vivek Thakur, son of BJP vice-president CP Thakur, lost to Shambhunath Yadav of the RJD by a margin of 30,776 votes from Brahampur.

The BJP’s Nitish Mishra, son of former chief minister Jagannath Mishra, lost to Gulab Yadav of the RJD by 834 votes at Jhanjharpur.