Become a Member
Ad
Jyoti Srivastav, head bent over the screen of her laptop, tried yet again to connect to the internet. Behind her, dozens waited at the Pragya Kendra in Cheeru village in Latehar, Jharkhand.

The Airtel phone tower in Balumath, the block headquarters, had caught fire three months before, said Srivastav, manager of the sub-kiosk. “Since then, we’ve had these problems.”

The kendra, of which there is one in every panchayat in Jharkhand, functions as a delivery centre for services; it is where villagers can apply for caste, income, birth and death certificates, and also get private sector services such as mobile recharges.

The kendras are envisioned as the last-mile delivery points in the National Democratic Alliance government's ambitious “JAM” – the bundling together of Jan Dhan bank accounts, Aadhaar identity numbers and Mobile networks, as the cornerstone of its welfare policy.

As planned, all social stipends will be routed through Jan Dhan, the bank accounts to be opened for every citizen. Cash transfers to these accounts will replace benefits in kind, such as subsidised foodgrains. The stated goal is that the poor can access benefits at their doorstep, or in their village, by using their Aadhaar, biometrics-based identity numbers.

Between vision and realisation lies a problem – inadequate infrastructure. Even when the internet connection works, Srivastav said, she runs into other problems. She pointed to a small black device emitting a blue light, that was connected to the laptop. It was, she explained, used to verify biometrics data to carry out banking transactions.“If the person has even a small cut on the finger – pathera log, those who work with stones and bricks, often have such cuts – the machine does not recognise the fingerprint," she said. “What can I do? I tell them to apply lemon juice, atta, and Boroplus at home, come back when the cut is healed and try again.” 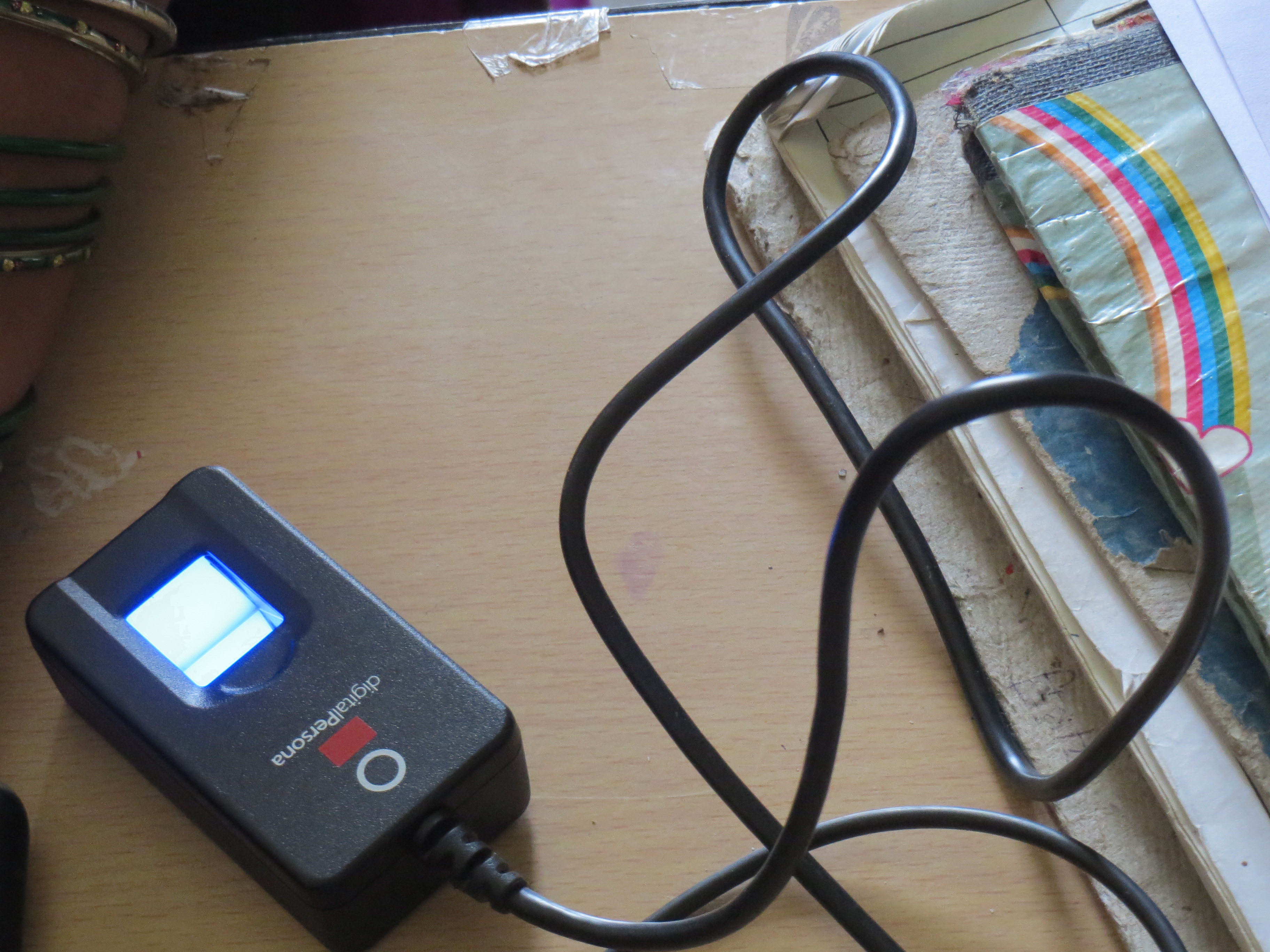 In August, when the biometrics scanner stopped working, staff had to go to Palamu, and then the capital Ranchi  to get it replaced.

The cup and the lip

The farmers welcomed the idea of having banking services available right there in the village – when the machine works. But when it doesn’t, it leads to months of disruption in payments to the poorest beneficiaries.

Cheeru has been chosen as a pilot panchayat to try out the scheme. Since the village sits on an elevation, district officials had hoped the internet connection would be stable. This isn't the case. Throughout that day, bank kiosk staff worked to try and restore the connection while a line of old-age pensioners waited in hope.

Harif Miyan was one such person. The elderly farmer from a neighbouring village of Rohan said it was his fourth trip. For the past ten years, he received his pension – Rs 600 per month – through the village post office with minimum fuss, on producing his passbook. Under the new scheme, he needed a Jan Dhan bank account to get the money.

“It was more convenient to get the pension at the village post-office,” agreed Shakiran Miyan, a 70-year old farmer from Cheeru who was waiting in line along with Harif Miyan and others. He hadn’t received his pension for two months, and now his anxiety was escalating.

Latehar district, to which Cheeru village belongs, has just 37 bank branches for a population of 7.26 lakh. Most branches are staffed by just one person each, District Collector Balmukund Jha said. Given the shortage of staff, the local administration has partnered with Vikalp Media, a private company, to provide services to the over two lakh new beneficiaries for whom accounts have been opened. 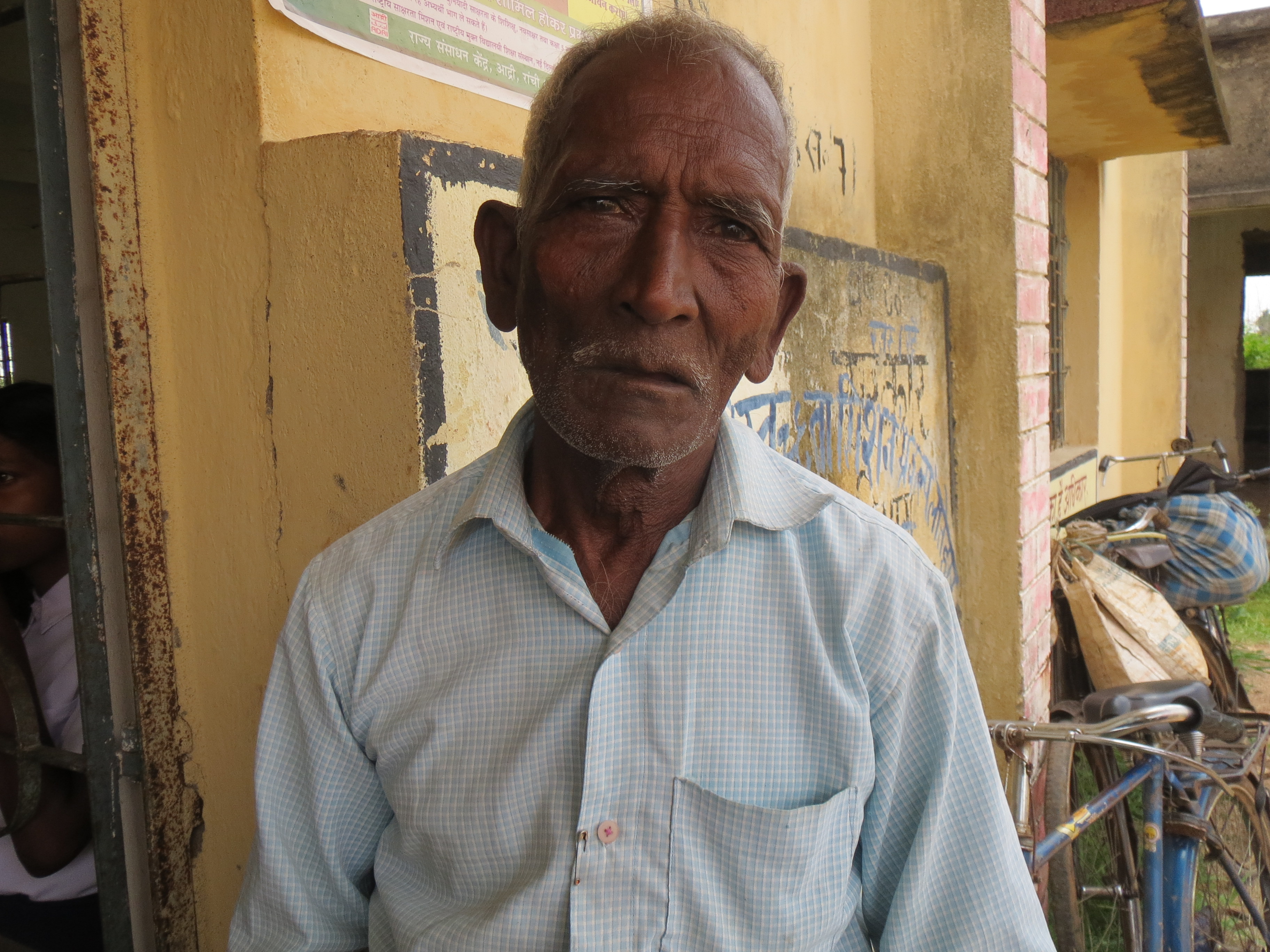 Harif Miyan has not been able to get a bank account opened to get his pensions after three attempts.

Vikalp, in turn, has hired agents, called banking correspondents – village-level entrepreneurs who act as extension counters for the major banks. Their job is to provide doorstep banking facilities such as cash withdrawal and disbursal of wages for the Mahatma Gandhi National Rural Employment Guarantee scheme with the help of hand-held devices, like mini-ATMs. In return, the government pays Vikalp and the banking correspondent a fee of 0.25% of every transaction. (In other districts, authorities have partnered with similar agencies such as FINO, United Telecom Limited). Of this 0.25%, 80% goes to the banking correspondent directly and 20% to the company.

Large areas of Latehar have neither electricity, nor a functioning internet connection. The administration relies on solar panels for power and Very Small Aperture Terminal satellite ground stations for connectivity. When the weather turned bad, said the manager of State Bank of India’s Bhainsadon branch, I Hembrom, both systems collapse.

Connectivity is one problem. Staff at Pragya Kendras in other parts of the district list many more. Banking correspondents are required to carry large amounts of cash for disbursal, and that creates a problem of security.

At the Pragya Kendra in Navagarh panchayat, some 80 kilometers from Cheeru, a large crowd had gathered by 11 am one recent day to get bank accounts opened and to enquire about delays in payments of pensions and scholarships.

Navagarh panchayat, hemmed in by a dense sal forest, lies in a Maoist stronghold. In August, robbers cleaned out the local Kendra, housed within the panchayat bhavan. “They took everything – a printer, scanner, two desktops, a computer camera, and even the caste certificates that were stored here,” said area banking correspondent Sarwar Alam.

Not only did it take weeks to get everything replaced, Alam had a hard time even getting a police complaint recorded. “The police asked, 'why did you not take everything home with you before leaving the office?',” Alam said. “I had to explain that desktops, printer, scanner, these are heavy objects, I could not possibly carry them.”

Several of those who had queued up in front of Alam's desk were worried that they had not got their Aadhaar cards despite having enrolled twice, and in some cases even five times, and ascribed it to delays in the post.

Mungeshwar Baitha, a Dalit farmer with a daughter and a son in class VII in the local government middle school, was particularly worried. His son had received a scholarship of Rs 1,000, but his daughter had not. “The Masterji said only my son will get the scholarship in cash this time,” said Baitha. “For my daughter Shobha, I have to get a new account opened. But I do not understand – when both of them have their names in the scholarship list, how come only one gets the payment?”

During Supreme Court hearings on whether the government could proceed with the Aadhaar scheme despite the absence of a law to ensure privacy of the data collected under the initiative, the Centre said it was already using the biometrics programme to disburse most social stipends. The scheme, it said, had become indispensable and any restriction on Aadhaar would disrupt payments to the beneficiaries.

But the situation on the ground differs from the picture painted by the government. Though Aadhaar has been made mandatory in some schemes, it is not being used in several others.

Anjan Kumar Moitra, the head of Jharkhand's state-level bankers' committee, a forum coordinating development measures, said that many people did not have Aadhaar cards at the time of the opening of their Jan Dhan accounts. To overcome this, banks had taken prints of their first three fingers of each hand and stored them in local servers. In villages like Navagarh, these are being used to authenticate transactions, especially for scholarships for children.“Most children have not got Aadhaar," he said. "We scan and match the biometrics in the bank's database and complete the transactions."

The use of these multiple systems has created confusion. Villagers in Cheeru and Navagarh said there was insufficient information on the method of identification required to get different types of payments. 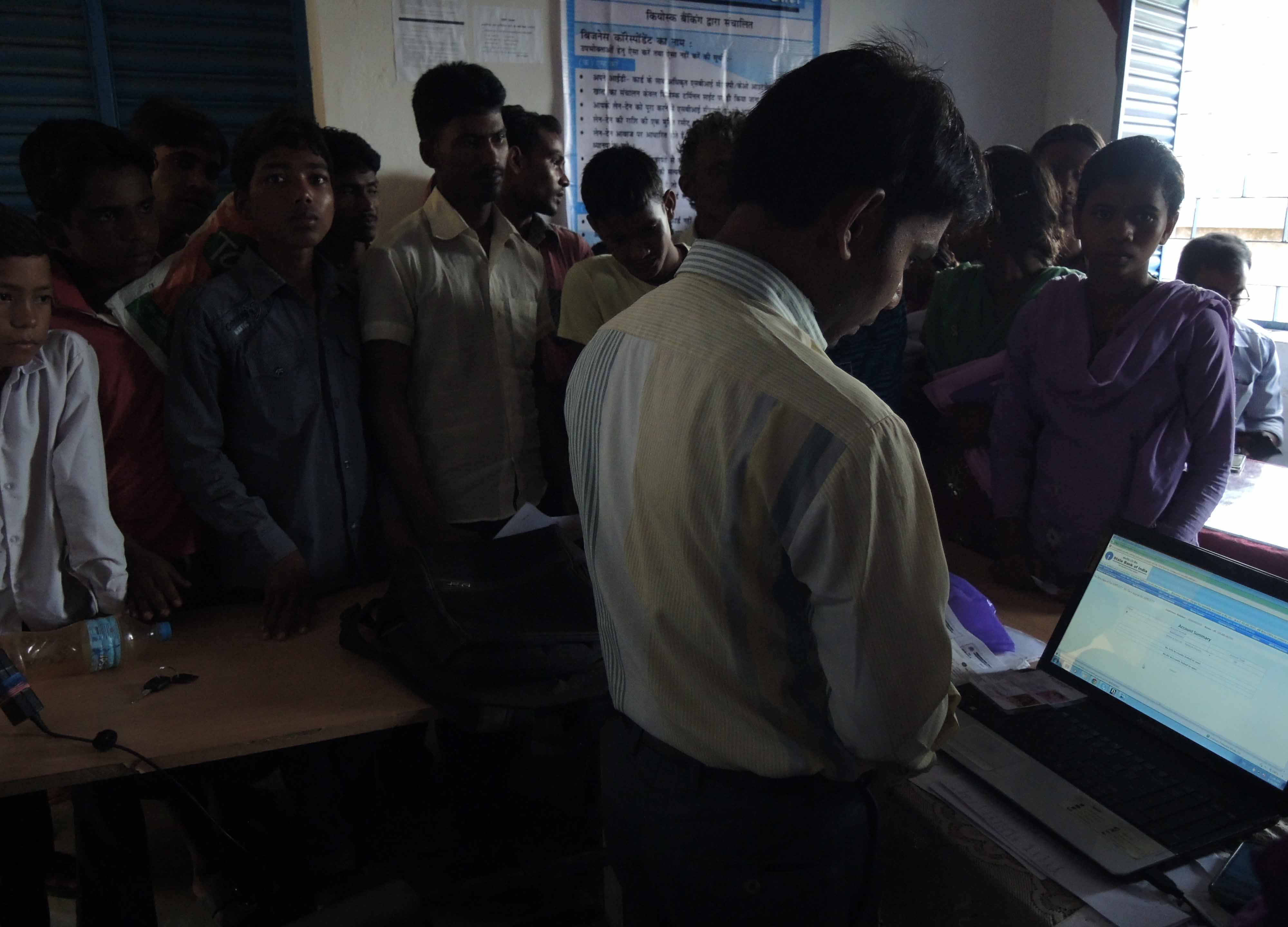 In Navagarh that day, only a few transactions were successful. Ishrat Parveen, a student of class IX, was able to verify her biometrics, and was told to collect her Rs 1500 scholarship from the centre the next day. But Class VIII student Mazboon Khatoon, who had come with her uncle Rajab Ansari to access her scholarship, failed, despite repeatedly placing her index finger, then her thumb, on the scanner.

The internet has stopped working again, said Alam as he left the centre to try and identify the problem. Meanwhile, the queue snaked around the block, and continued to grow.

“Sarwar bhaag gaya hai, aur server bhi down hai,” exclaimed Mubeen Ansari, one of those waiting in line. Sarwar – the first name of the banking correspondent – has run away, and the server is out of action.

The others laughed at the wry observation. But their laughter had an undercurrent of resignation.

This is part one of a two-part series on Jan Dhan-Aadhaar-Mobile. Read the second part here.

Despite the comparisons, India's Aadhaar project is nothing like America's Social Security Number