Nov 16, 2015 · 09:45 pm
Vidyut G K, IndiaSpend.com
Cows are revered in Maharashtra and protected by law against slaughter. Buffalo, on the other hand, are the bulk of the beef industry that makes India the world’s largest beef exporter. One would think that already abundant cows would thrive under such circumstances, while buffalo approached extinction.

Yet, the opposite is true, as an examination of Maharashtra’s livestock census reports reveals. 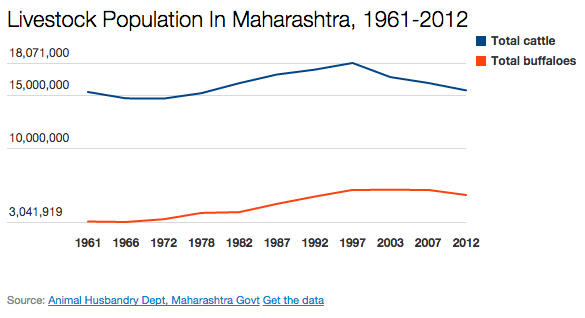 Why is this so? The data from Maharashtra, correlated with events of the last 55 years, tell a larger story. Bans on cattle slaughter – now in force in 24 of 29 states (Maharashtra widened and enforced its ban earlier this year) – may actually be a disincentive to cattle farming.

The story begins with the widely differing sex ratios of cattle and buffalo in Maharashtra. 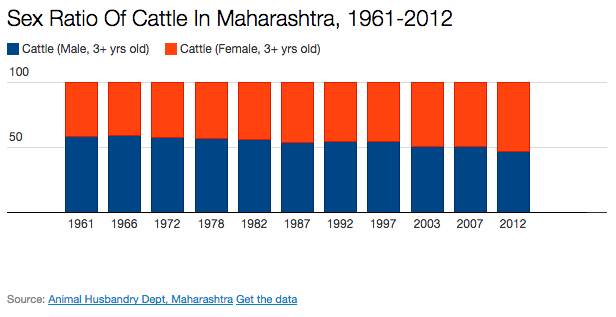 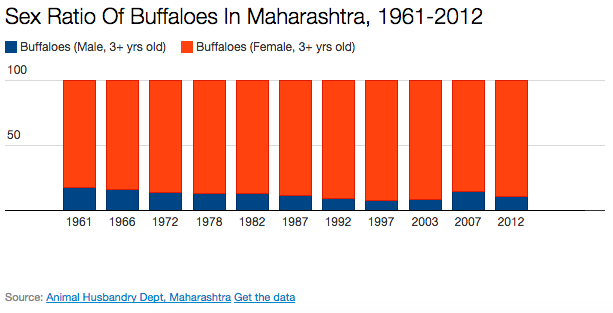 The population of male cattle is consistently higher than female cattle, initially, with a gentle rise in both, cows growing in number marginally faster than bulls and bullocks. This made sense before the popularisation of motorised transport, with bullocks being used for transport. Even in the absence of a cow slaughter law, farmers did not cull productive cattle. The slowing growth of cattle coincides with the emergence of motorised transport in India.

Cattle slaughter has never been popular in Maharashtra due to religious sentiments. When bulls and bullocks lose utility, the overall growth slows, with farmers reluctant to breed animals. Unproductive cattle, as we mentioned, prevent growth of the business by increasing expenses, occupying resources and preventing acquisition of productive cattle.

Buffalo suffered no such handicap, with males consistently culled to provide meat. This not only frees resources for productive buffaloes to be bred or purchased, it provides the farmer additional income and adds to the profitability and thus viability of the business.

What else was happening in the agricultural world around that time? Maharashtra’s post-economic liberalisation agrarian crisis was by now full blown.

By 1995, journalist P Sainath’s reports of farm suicides had triggered enough alarm that they started being recorded in National Crime Records Bureau data from that year on. Economic liberalisation and “development” rapidly reduced pastures and forest land. Livestock, as an economic asset and buffer against poverty, appears to have lost potency by 1997.

As farmers committed suicide, cattle population growth declined, but there was no major slaughter of bulls and bullocks (which would have been reflected as a drop in the sex ratio). Overall population started dropping steadily, as cattle farming became unviable. This means breeding slowed to accommodate the drop in resources.

One of the worst droughts to hit Maharashtra came along in 2012, preceded by conditions that made it occur. Ten years of spending on irrigation and continuously expanded budgets of projects had resulted in virtually no increase in irrigated land; this became famous as the irrigation scam. Water resources were over-allocated, rampant drilling of borewells lowered the water table.

Buffalo have higher water requirements than cows. So, buffalo owners appear to have sold off their livestock in unusually high numbers. This is probably also a factor in India becoming the world’s largest exporter of beef at that time.

These would be imported dairy breeds with high production. Their requirements of water would be less than buffalo, and milk yields would be higher. Indigenous cows, on the other hand, barely produce enough to justify a business, if it also means supporting unproductive cattle with the small profits. Those continued to diminish.

The rise in the number of exotic and crossbred cows (usually Jersey or similar breeds, as well as their crosses with Indian cattle, reared for dairy), combined with the highest drop in male cattle also belonging to the same category, shows that for the first time in Maharashtra, the more progressive dairy businesses had understood why Dr Verghese Kurien, the man behind India’s dairy revolution, advocated culling of unproductive cattle.

They were reconciling with a pragmatism in their business model with the slaughter of unproductive males, who have greater dietary requirements, and are less suitable for work than hardy, indigenous cattle breeds.

(This slaughter of male cattle certified unfit for work, was legal till the law was expanded this year for all cattle, although the numbers indicate that a few rules may have been bent with regard to age and fitness for slaughter.)

As we said, buffalo require more care, water and suffer more in drought, for comparable quantities of better quality milk. In the absence of slaughter bans, cow beef is more palatable and thus priced higher than carabeef. With no bans, this would add to the income of the cattle farmers and make it sustainable.

This adoption of culling, forced by adversity, had potential to transform dairy farming, but it did not last.

This year, the Bharatiya Janata Party-Shiv Sena government in the state cleared a stricter ban, which was pending for 19 years. Now, slaughter of any cattle is illegal, including those that could be slaughtered before: male, calves, old and infirm.

Overnight, cattle have lost value as assets and are instead a liability. From being able to sell a bullock to raise money for sowing and buy one when the money from the harvest came in, the farmer may now have to borrow money and feed the livestock from that money as well.

Cattle abandonment is on the rise. Farmer organisations, such as the Swabhimani Shetkari Sangh, once allies of the government, now threaten to abandon cattle in urban areas, even as the government promotes questionable ways ways of assigning value to unproductive cattle.

Ban on cattle slaughter at markets not meant to harm anyone, open to suggestions: Government