Contribute Now
Ad
The Shillong leg of the NH7 Weekender music festival held last month was declared a resounding success by Vijay Nair of Only Much Louder, one of the show's main organisers. Nair may well be right, but his proclamation has stirred the beast howling that awful refrain: “Shillong is the rock capital of India."

This beast rears its ugly head every time Shillong and Western music are mentioned in the same breath. It started as a whisper when the Rock On 2 team began filming in Shillong. But with the success of NH7 and the release of Standing By – a six part documentary on “independent music in India” – in which Shillong features prominently, this whisper has been amplified into a deafening roar.

So what exactly is this beast? It comprises a section of show promoters, musicians, local elite and a patronising visiting media, who have all self-servingly constructed an image of this hill station as rock music’s “chosen one”.

Shillong’s association with western music has been a subject of much hagiography. Most of the writing on this field has been gushy, uncritical and downright fallacious. In this context, the rock capital claim is a “Johnny come lately” to the pantheon of effusions on Shillong’s western music. So take your pick: "Rock n roll is dead, they say. They probably haven’t been to Shillong", "where every house has a guitar’, "where every cab blares Pantera…" The list goes on.

Shillong does have a storied past where the waltz, the foxtrot, the bop and other song and dance forms livened up the town’s jam sessions and dance halls, where the Fentones won the Simla Beat Contest in the 1970s, where The Great Society electrified both local and national audiences in the 1980s, and where names like The Vanguards, The Vaudevilles, Blood and Thunder and Eddie Rynjah, to name a few, are as recognisable as the state’s founding fathers.

But this past hasn’t been examined in any meaningful way and remains an imprecise history where stories easily morph into myths and fact easily collides with fiction. That is fine.

But when this imprecise history is used to create illusions about our exceptionalism, it needs to be challenged. What we can claim, at most, is that our tryst with jazz, rock n roll, country music and the blues came much earlier than it did in most small Indian cities and perhaps even in some of the bigger ones. The chain of this tryst can be found even today, though its links are in varying states of disrepair.

Even so, it would be fair to say that in any writing of the history of western music in India, Shillong would deserve a chapter. It is just that the writing of this chapter has become way too problematic – too many loose ends and too many grand unifying theories.

Equating Shillong with Western music (read culture) has become an elitist construct and it is not uncommon to hear perfectly asinine statements like “400-500 tribes connected though Western music” being made by former senior ministers.

A cursory visit to the outskirts of the city would relieve most of us of this tired notion. But clearly an illusion needs to be maintained here. In an effort to “keep up with the mainland Joneses”, it is an illusion that a section of people in Shillong shamelessly sell to magazines and television channels, which lap it up with guitar, drum and hi-hat because it saves them the trouble of actually understanding us.

Those seeking to document Western music here arrive with these clichés in their travel bags. They speak to the perpetrators of these same clichés, have self-serving conversations and feed it all back to us who hungrily devour these myths because it makes us look good. In between them, they have simplified an entire culture and turned it into a standardised and easily digestible set of meals. Here is the recipe:

State with a large Christian population (1 kg)
Education hub of the north-east (mix with beef stock)
A naturally gifted musical people (add to your liking)
Mix well, fry, and garnish with a thousand guitars

The pursuit of Western music, in no way, dominates Meghalaya’s landscape. And yes, Shillong and Meghalaya are not interchangeable. There are writers, filmmakers, painters, designers, sculptors, activists, dissenting spaces, progressive politics and other endeavours in the state’s urban and rural areas. Truth be told, they are much more interesting than some of the Western music coming out from the state. But any mention of Shillong in the mainland is still met with guitar-shaped queries. It will be interesting to see how Rock On 2 interprets Shillong (the signs are not good), but Standing By dives head on into the Shillong fairy story.

This myth of Shillong as some “rock capital” is easy to bust. A national newspaper has even offered a supposedly less presumptuous sobriquet – The Heritage Rock Capital of India. A section of the town’s journalists and musicians have questioned the need for such grand titles. Any place that calls itself a “capital of anything” would need to have abundance, in terms of both quality and quantity, of that “thing”.

So where is the music they ask? Where are the venues? Where are the thousand songs from the thousand guitars? Also, there are other questions to be asked here. For example, what have these myths done for Shillong’s musicians? Has it opened doors for them that would otherwise be closed for musicians from other, less fabled places? What does it mean for musicians to grow up with this myth – do you live up to its name, do you become complacent, do you care at all? Do these myths comfort local musicians when they face the reality that Western music is thriving elsewhere?

My answer to most of these questions is no, but I might also add that these myths about Shillong will continue partly because of the aspirational aspect of small towns that want to think of themselves as cities. Some of us, however misguidedly, will wield these claims to our exceptionalism as a stick when confronted with the big city lout.

But there is, and always has been, a self-esteem in Shillong that doesn’t pander to romanticism and one that is at ease with the complexities of the town’s identity. Grand promises like a Times Square in a local neighbourhood, the New Shillong Township, and Smart City status doesn’t have as many takers as is believed. But governments, as they are wont to do, are hell-bent on peddling illusions. So rock capital pretensions, in a way, are right down the alley of such governments.  This muddle of illusions, pretensions and myths has given birth to a curious dichotomy in Shillong’s Western music scene today.

It’s a dichotomy based on patronage.  The patronised musicians are the ones featured everywhere in government-sponsored concerts. This might make the state government seem particularly munificent, but believe me it is not.

To substitute for its lack of imagination, the government has put in place an event-driven, consultant-based machine. Events are organised at the speed of rabbits multiplying, and to take the rabbit analogy further, these events are organised only in the mating season (usually between October and November). These shows usually follow a musical revue template, with token local flavour thrown in, and where a hastily assembled line-up of musicians, painters, writers and craftsmen are supposed to gratefully accept this dole while the government is still in the mood for largesse.

These babu-controlled affairs have all the soul of a government gazette. But for a section of musicians, this is the season when they get paid. Sadly, the genre of choice at these shows is what you would broadly call rock – alternative, blues, country, classic and progressive. To be fair, the rockers have to take what they get. But you can see how a tag like “rock capital” works when government agencies, in a hurry to spend their funds but short on knowhow, are looking for signifiers.

Babus who sit on their backsides all year long suddenly have a catchphrase that they can peddle and into which they can sink their teeth. The town’s music undergoes simplification again as bureaucrats rally around this myth to claim that they have done something for the state’s arts and culture. Granted, artists like Soulmate, Lou Majaw and a few others might not need the patronage as they have built their careers themselves, but the younger rockers are playing a dangerous game when they start seeing babus as benefactors.

At the other end of the spectrum, metal and hip hop, who have always been the regarded as the unrespectable cousins of rock, receive only a pittance of that patronage. To a large extent, this has strengthened the do-it-yourself ethic of hip hop and metal bands. It is artists such as Aberrant, Plague Throat, Crytographik Street Poets and K Bloodz, among others, that are giving Shillong some semblance of a “music scene”.

It is mostly these metal bands and hip hop crews who are putting out their own material and organising their own shows. Every day, they are reaching out and finding a community of their own and it is for this community that they play. They are not waiting for big events, the bright lights and the big cities to find their audience, as most rockers do nowadays. In fact, the hip hop and metal artists are doing what their rock counterparts did in the '70s - playing for their people. They would rather spin verses than weave illusions.

So yes, there exists in Shillong a powerful lobby that is knitting a simplified tapestry to sell our music and our culture to the national and international media, but it survives only because of the uncritical benevolence of this visiting media.

This benevolence is, of course, more uncaring than kind, for what is more convenient for makers of “soft news” stories than to cater to the “quaint pretensions” of some remote hill station. But there also exists a real history of Western music here that is still waiting to be written so that we can celebrate and critique once and for all the best and worst tendencies of our culture, rather than being continually seduced by mealy mouthed hagiographies.

PS: Shillong is not even the rock capital of Meghalaya. For most of the year, the Jaintia Hills, with its locality fetes, beat contests, Bamphalar (an annual theatre festival) and locally funded films, is not only the rock capital, but also the cultural capital of the state.

A version of this story first appeared on Raiot, a webzine from Meghalaya. 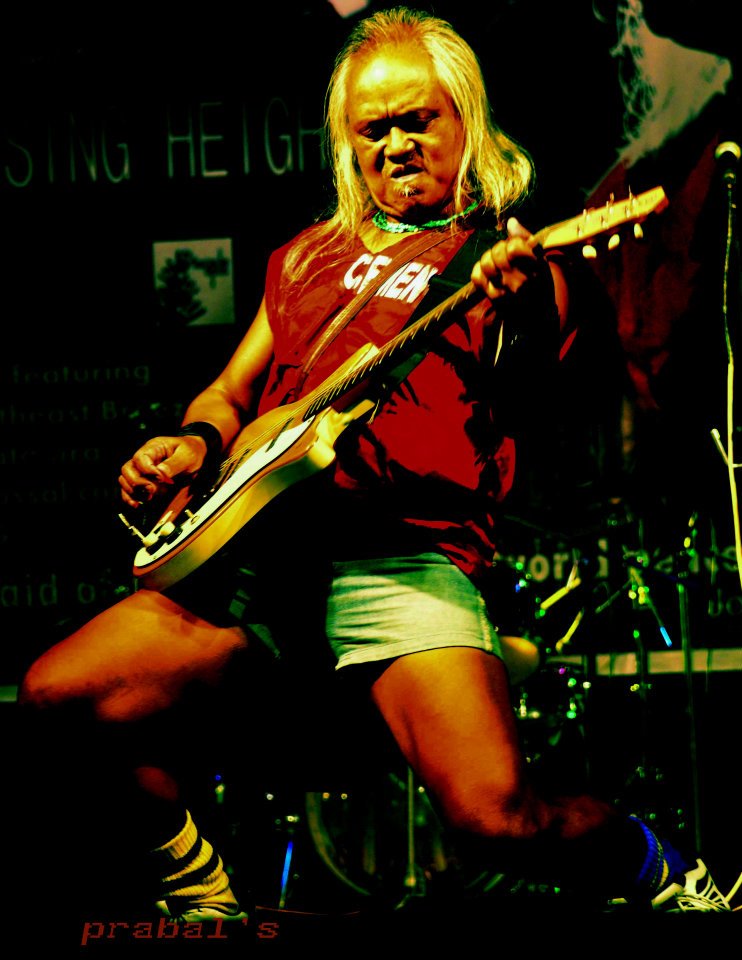