Contribute Now
Ad
Yogi Adityanath, the Bharatiya Janata Party’s member of Parliament from Gorakhpur, is no stranger to controversy and finds himself in yet another tangle. The firebrand leader was scheduled to inaugurate a new building in Allahabad University on November 20 but protests erupted on Thursday morning, led by a section of students who have vowed to not let the “controversial and communal” politician enter the campus.

The students’ union at the university is dominated by three members from the BJP’s student wing Akhil Bharatiya Vidyarthi Parishad who got invitation cards printed and were also reportedly at the forefront of organising the programme. The newly elected president Richa Singh, who contested independently, distanced herself from the event and called for protests.

Singh, the first woman to be elected president of the university’s student union in its 128-year-long history, has raised objection against the fact that the invitations carried her name, implying her support.

“Yogi Adiyanath is a controversial leader who speaks on communal lines against Muslims,” she told the Indian Express. “Here we have Muslim students too in the university. If any riot-like situation occurred after his speech on the campus, who will be responsible? The ABVP members invited Adityanath without consulting me and that is against the AUSU [Allahabad University Students Union] constitution,” she added.

On Thursday, students wore black bands covering their mouth and demonstrated inside as well as outside the campus to protest against the controversial leader.

“Yogi Adityanath, Go Back!!” screamed a placard carried by a student with black band across his mouth, apparently to signify the resistance against the communally charged speeches that the politician has recently dominated the headlines for.

In June this year, Adityanath declared that those who opposed Yoga could leave the country and drown themselves in the sea. More recently, he compared film actor Shahrukh Khan to Pakistani terrorist Hafiz Saeed and said the actor's statements on rising intolerance in India amounted to treason.

Even as the university stands divided on the issue, intervention by the authorities didn’t prove useful. A meeting called by the Vice Chancellor A Satyanarayana saw heated arguments from both camps as the ABVP representatives insisted that the program will go on as planned at the convocation grounds near the Arts faculty of the university.

Vikrant Singh, the student union vice-president, told the Indian Express that Richa Singh "follows an opposite ideology, like that of the of SFI (Students’ Federation of India) and AISA (All India Students Association)." Charging her of not having attended any of the meetings related to the event, he added: "She only attended the Monday meeting that was called by the vice-chancellor to finalise the venue of event. The event will be organised as per schedule on grand scale at the convocation ground.”

Meanwhile, Sunil Maurya, president of the Uttar Pradesh unit of All India Students' Association, which is leading the protest along with other student outfits at the university, said that the protests against Adityanath's visit will continue.

"A person who was barred by the Election Commission from entering Uttar Pradesh should not be called to a university," he said. "He has personally supervised riots. His image does not befit a university. A university stands for universal values and humanism and we will do whatever it takes to uphold these values."

Here’s a look at some of the pictures of the protests: 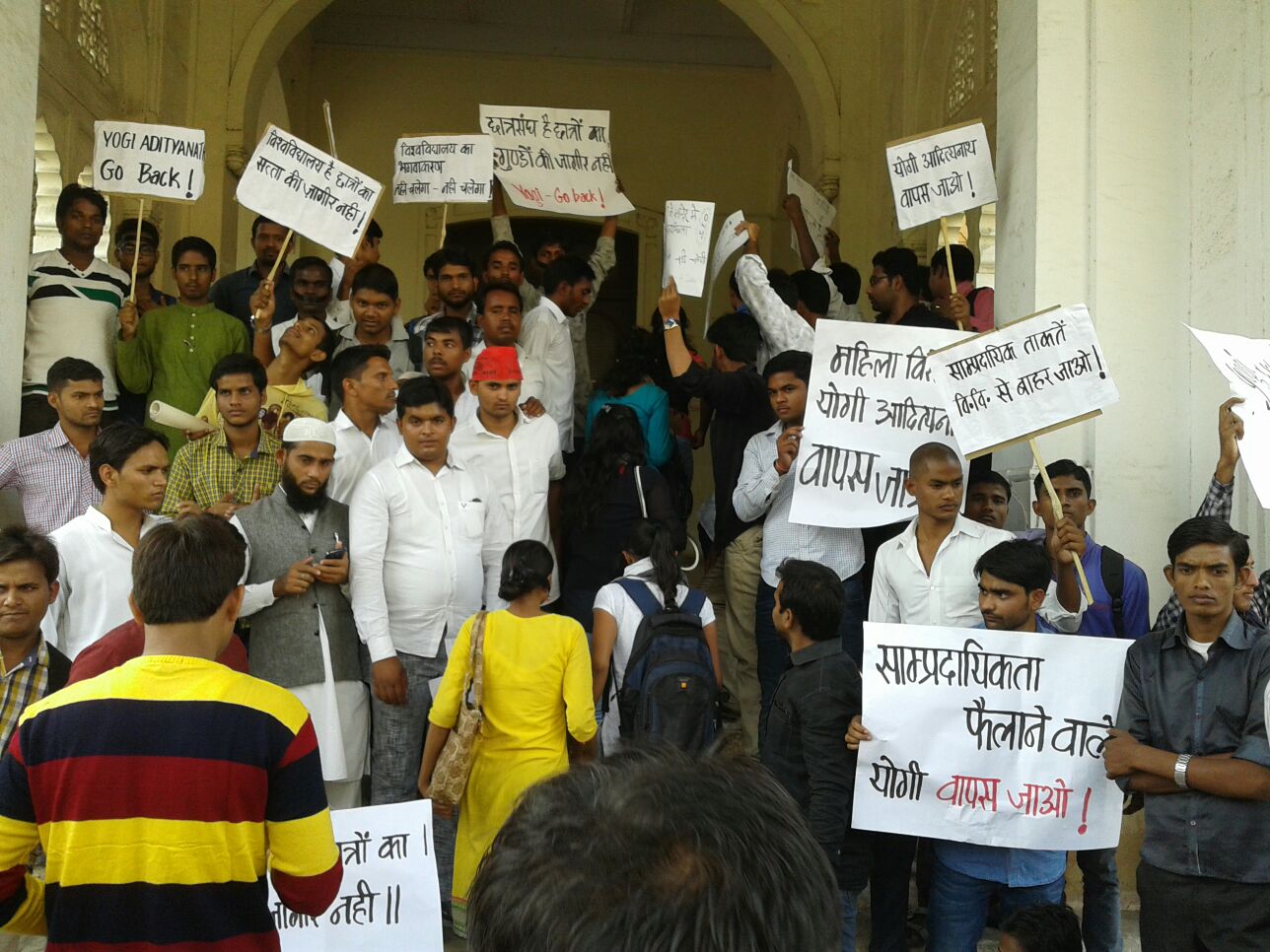 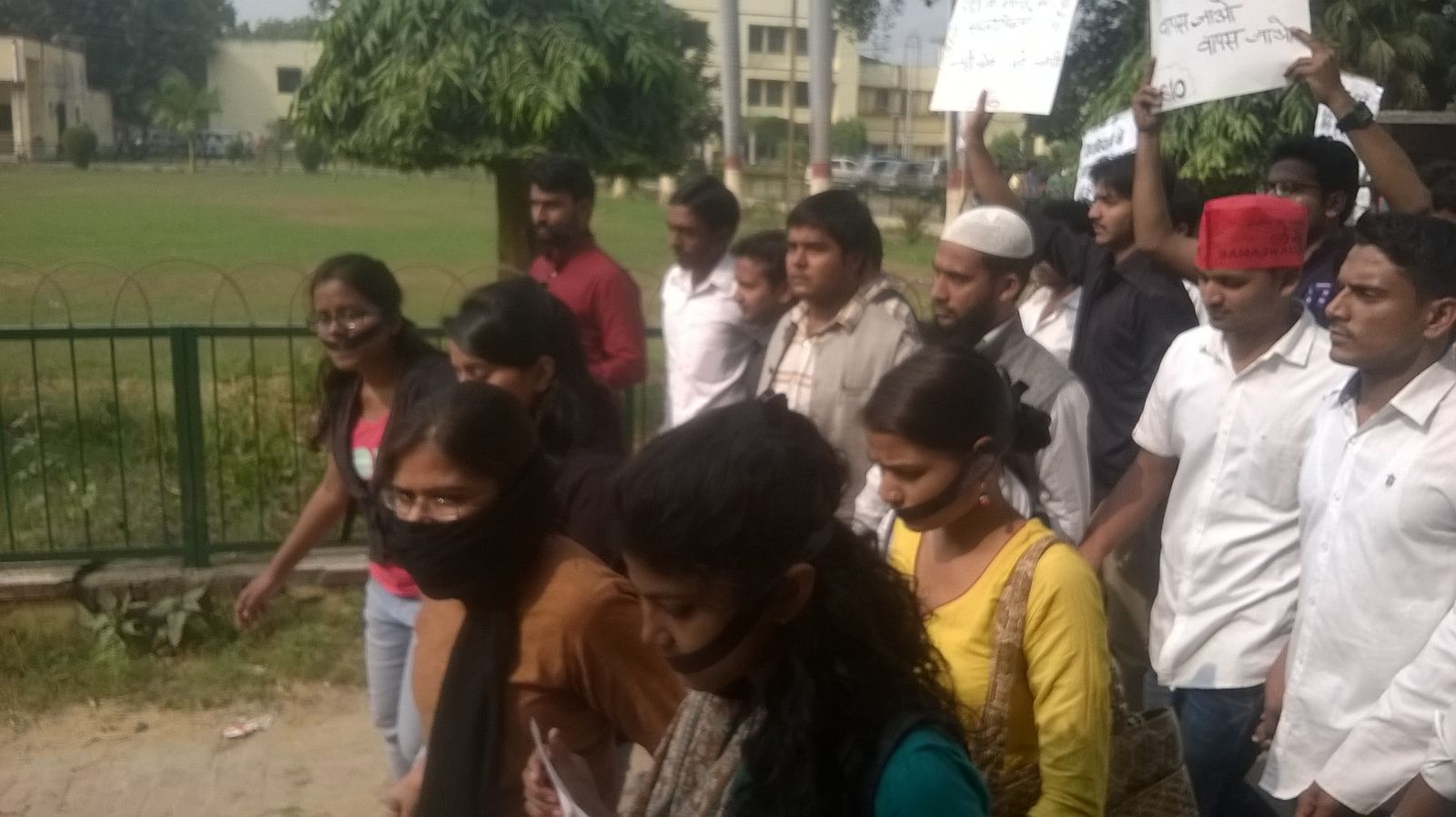 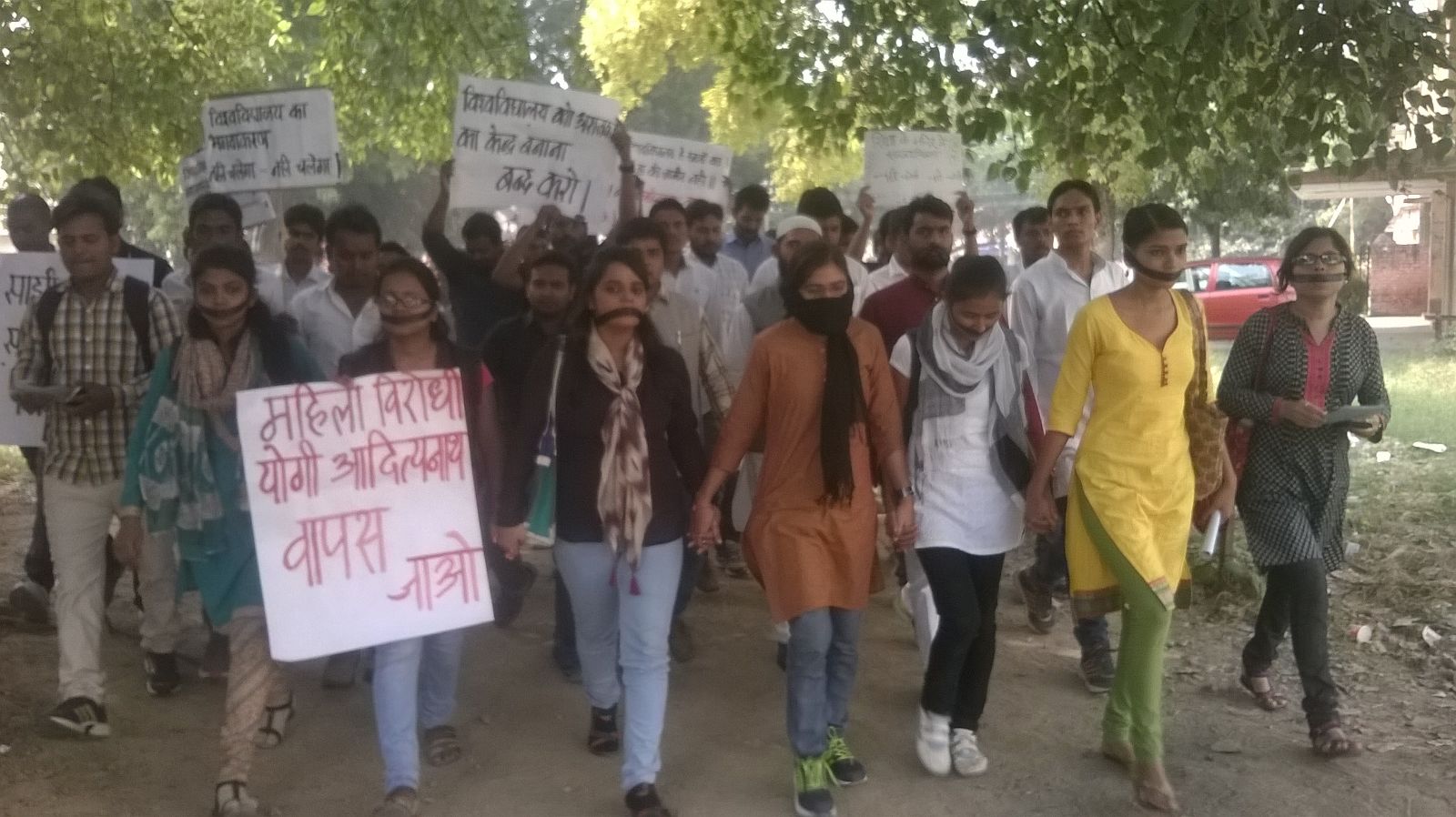 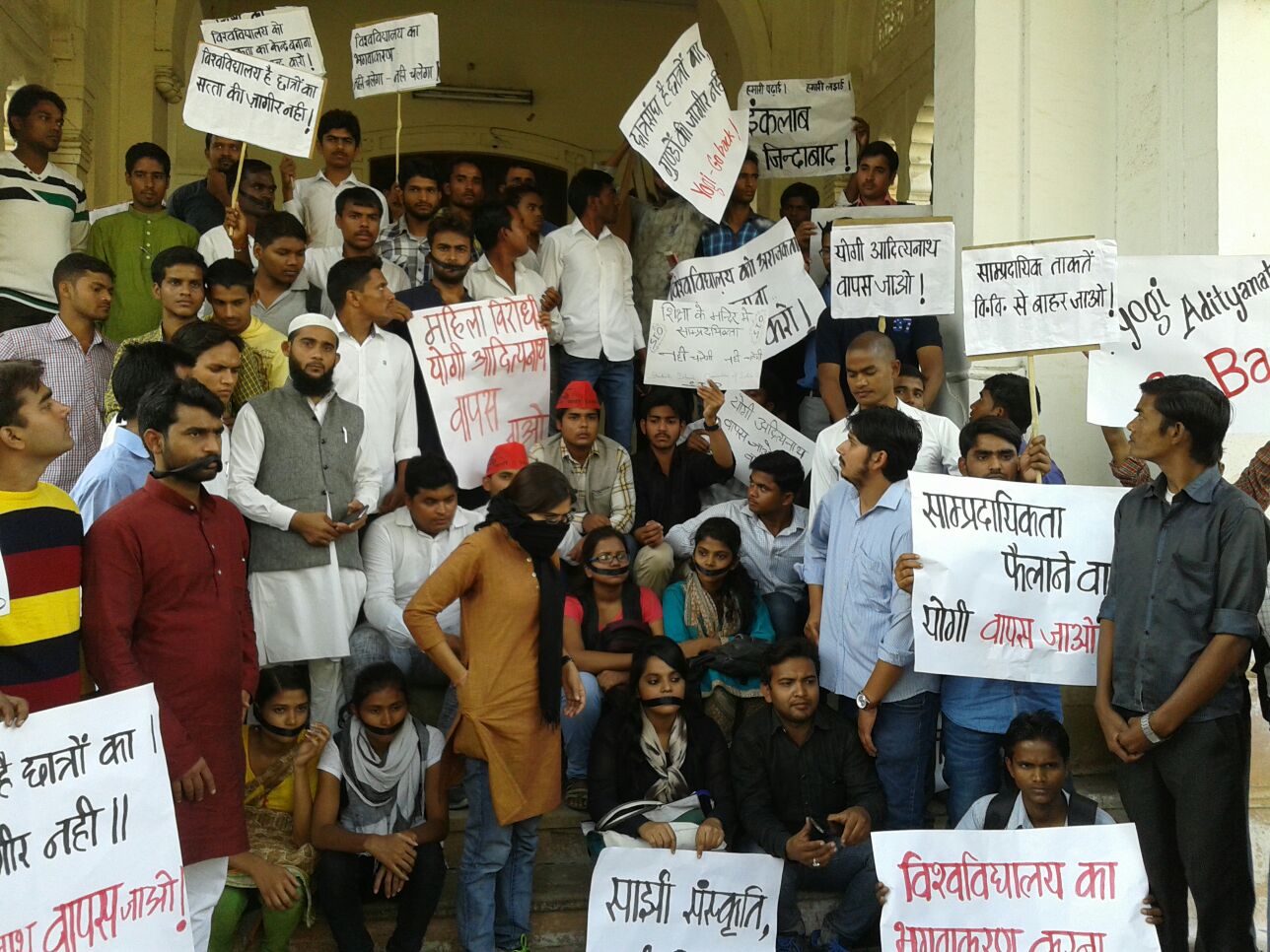 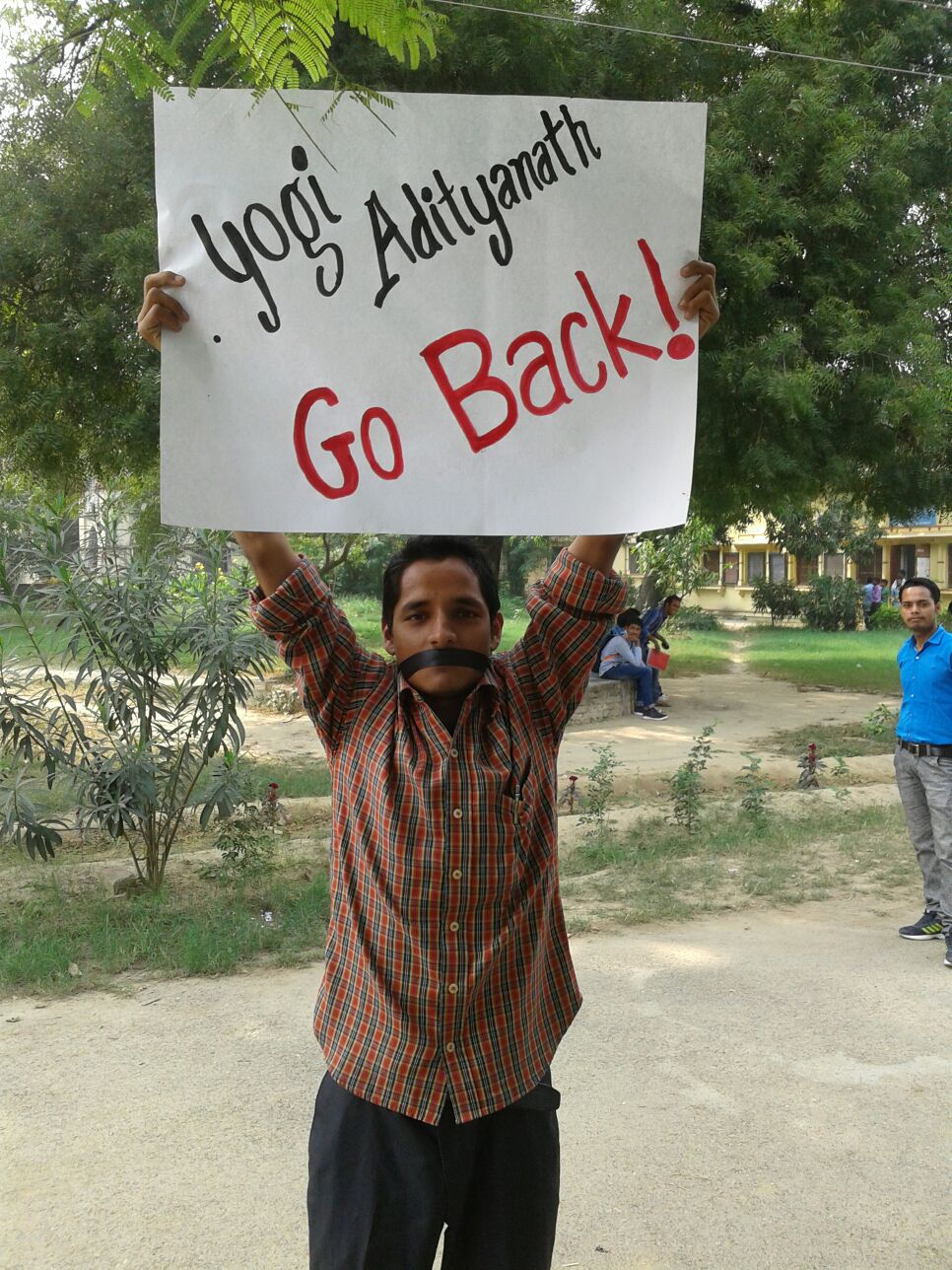