Contribute Now
Ad
First he became the face of yoga in India. Now, he is taking on major global consumer goods companies with products ranging from herbal tea and fruit juices to toiletries.

Baba Ramdev – born Ramkrishna Yadav – seems poised to give some of India’s biggest consumer goods makers a run for their money with his ayurvedic, made in India products. Patanjali Ayurved Ltd, a company that Ramdev founded in 2006 along with his confidante, Acharya Bal Krishna, has emerged amongst India’s fastest growing fast moving consumer goods.

And Ramdev is piggybacking on Prime Minister Narendra Modi’s Make in India campaign to promote his goods. All the products that Patanjali manufactures have a “Made in Bharat” label.

Hah. Patanjali products are made in Bharat. Is that even regulatory compliance? pic.twitter.com/fz4VK0VSzq

This week, Patanjali launched a noodle brand to compete with Nestle’s Maggi, which is now back in Indian markets after a brief ban. While India’s food regulator, FSSAI, maintains that Patanjali’s noodles don’t have necessary approvals, the company is all set to start sales in the coming weeks. Ramdev’s company is also planning to take on global sportswear brands like Nike and Adidas by introducing a yoga-wear collection.

In January, Aditya Pittie, chairman of the Pittie Group, which is a distributor for Patanjali’s products, told the Times of India newspaper that the company was expected to cross the Rs 2,000 crore mark in the 2015 fiscal. If these estimates are true, the eight-year-old firm has already overtaken brands like Emami – an old name in India’s FMCG sector.

Quartz was not able to independently verify these figures as India’s Registrar of Companies does not have information for the 2015 financial, yet. Patanjali Ayurved did not respond to an emailed questionnaire from Quartz.

Although the company has a massive presence across India trough franchisees – its products are available in over 177,000 retail stores – it is now tying up with retail behemoths to reach a wider audience.

In October, Ramdev entered into a partnership with the Kishore Biyani-owned Future Group for promotion and distribution of its products. Future Group is one of India’s largest retail groups with presence in more than 95 cities.

“Our effort is to promote swadeshi and give a tough fight to MNCs,”Ramdev told reporters after announcing the alliance with Future Group. The 50-year-old yoga teacher added that Patanjali will also launch new products like pasta, oats, muesli and juices to cater to India’s growing middle class that is developing a taste for western flavours.

For the current fiscal, the firm is looking to target revenue of Rs 5,000 crore.

Here's how Patanjali's revenue has grown: 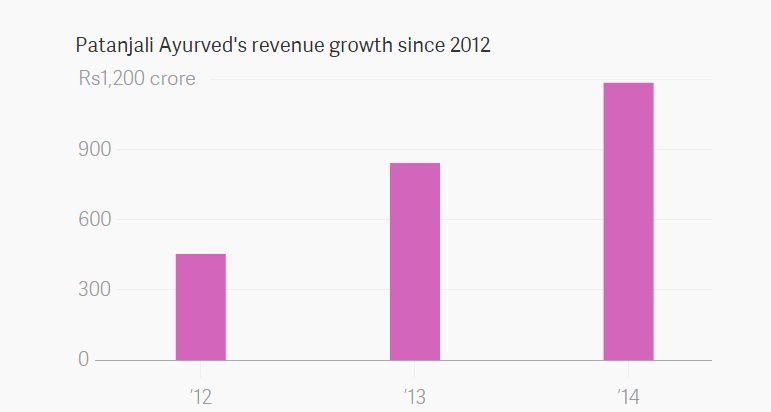 Headquartered in Haridwar, Uttarakhand, Patanjali was found in 2006 with a paid-up capital of Rs 41 crore.

“At its own claimed revenues of Rs 5,000 crore in this financial year, it will be among the top five FMCG companies in the country. With its recent announcement to enter more product categories – yoga apparel, baby and children’s nutritional foods etc. – it is poised to enter the top three in the next two to three years if its current spectacular growth rate continues,” Arvind Singhal, managing director of Technopak, a management consultancy, told Quartz in an email.

“With that size, it will certainly be a formidable competitor to several established brands and companies such as HUL, Nestle, ITC Foods, and GSK to name a few,” he added.

A report from international brokerage, CLSA, in August said that Patanjali’s core strength is its mass appeal.

“The plans are even more interesting as the company is now looking at ‘traditional’ ways to expand and targets to more than double the top line in coming years,” the report said. “While competition must be keeping its fingers crossed, all we can say is – ‘Wish you were listed.’”

The company usually refrains from spending big money on advertising and marketing, which is an important driver for brand creation.

Typically, an FMCG firm in India spends about 10-15% of its revenues on advertising while Patanjali had negligible spending and “relies mainly only on endorsement by Baba Ramdev and his disciples and instructors,” according to CLSA.

Much of the promotions also happen during yoga sessions conducted by Ramdev. The yoga guru also depends heavily on followers who are popular celebrities such as wrestling champion, Sushil Kumar, to endorse products during these yoga programs.

And according to CLSA, Patanjali has the potential to reach out to more than 200 million who are directly or indirectly linked to his yoga programme.

This year, as the company looks to take on some of India’s biggest FMCG companies, Patanjali has also roped in advertising agencies, McCann and Mudra to run a brand new campaign. The company has already roped in one of the country’s biggest film star, Hema Malini, to endorse a maida flour free biscuit.

Born in 1965 to a poor family of farmers, Ramdev, along with his friend Acharya Bal Krishna, started taking yoga lessons and travelling around on bicycles to clients’ homes to perform religious ceremonies in the late 1990s.

Today, Ramdev’s empire in Haridwar alone spans a hospital, an ayurveda medical school and research institution, a food park and a cosmetics manufacturing unit. He also reportedly purchased an island in Scotland worth £2 million to set up a wellness centre.

However, there could be some bumps in Ramdev’s smooth ride in the FMCG sector – especially with his new products such as noodles.

“In the growing market for ready-to-cook packaged food, a new entrant would struggle to create visibility and initial demand,” Devangshu Dutta, CEO of Third Eyesight, a retail consultancy, told Quartz in an email.

“The other aspect to keep in mind is that while a lot of food and nutraceutical products resonate easily with the Patanjali brand, instant noodles seems completely counterintuitive under this brand’s umbrella. How much consumers will support this new launch remains to be seen,” he explained.

Meanwhile, before launching the noodles, Ramdev who never tasted them, ate noodles for “several days,” Bal Krishna told the Business Standard newspaper. Patanjali can only hope that its customers take to their product with the same gusto.

Smell of success: Indian perfumers are conjuring up an innovative range of designer fragrances