According to the new pay bands, a government official at the highest level will have a salary of Rs 2,25,000 a month now while a Cabinet Secretary will take in Rs 2,50,000 as compared to less than rupees one lakh a month earlier.

The pay rise will benefit more than 4.7 million employees and 5.2 million pensioners in the country.

Pay commissions are set up every 10 years by the government to revise and revamp salaries of government employees. The sixth pay commission had raised the minimum basic salary by almost three times and took it to Rs 7,000 which has now reached the Rs 18,000 mark.

The commission this year has recommended a modest 16% increase in basic pay, 24% hike in pensions but allowance payout is set to increase by a substantial 63%.

As the above chart shows, the minimum basic salary of government employees has risen from Rs 35 as recommended by the first pay commission to its current levels in a matter of six decades.

The salary is only one of the parts of the government’s total wage burden as pension and allowances account for an equal, if not a bigger share, of its remuneration budget. Here’s how the components have changed over the years.

The total financial implication of the seventh pay commission has far surpassed expectations as it is going to cost an additional Rs one lakh crore to the exchequer.

“This will impact 47 lakh employees and 52 lakh pensioners. The total monetary impact on the central government would be Rs 1.02 lakh crore. Around Rs 74,000 crore would be the impact on the Union Budget and Rs 28,000 crore on the Railway Budget,” Finance Minister Arun Jaitley said.

Even though the commission report lays emphasis on maintaining the fiscal deficit under 4% level, the impact of a huge financial payout is going to be an obstacle. After these recommendations, total pay, allowances and pensions to central government employees will take the total wage payout to a massive 3.40%  of the GDP in the next financial year. 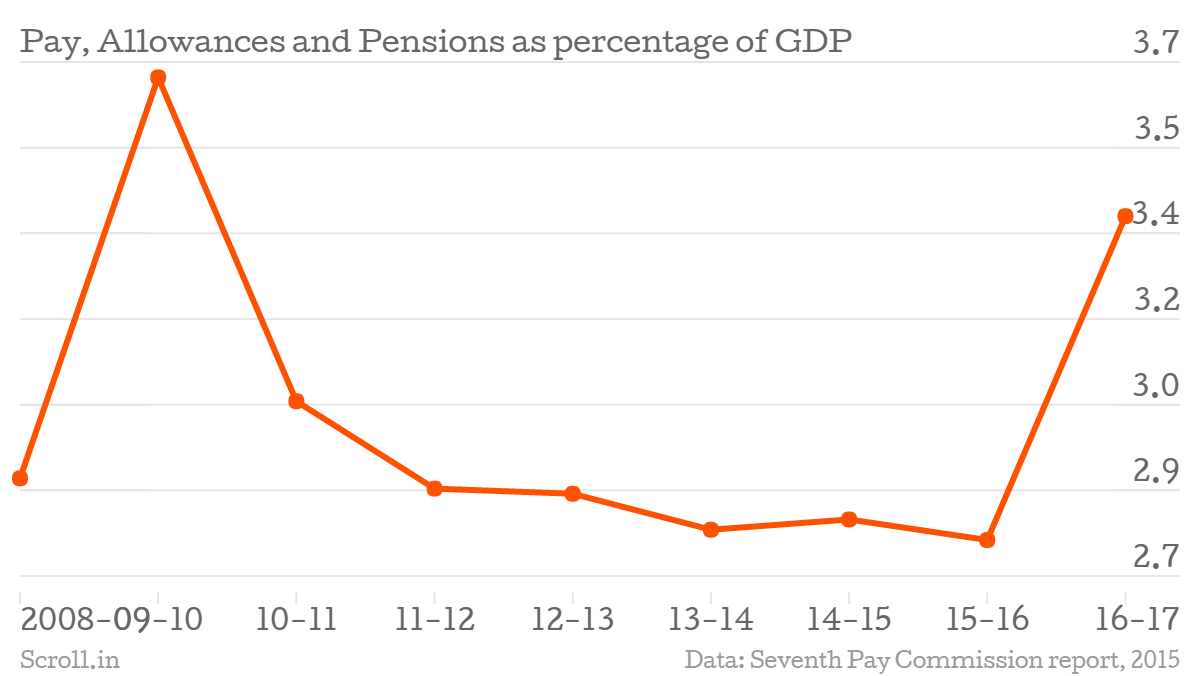 But to put it in perspective, it must be noted that India’s payout on government salaries is nothing spectacular compared to the rest of the world as many countries spend almost a tenth of their total expenditure on government salaries. This ties in with the long standing critique of the government employees that they are overworked and underpaid. 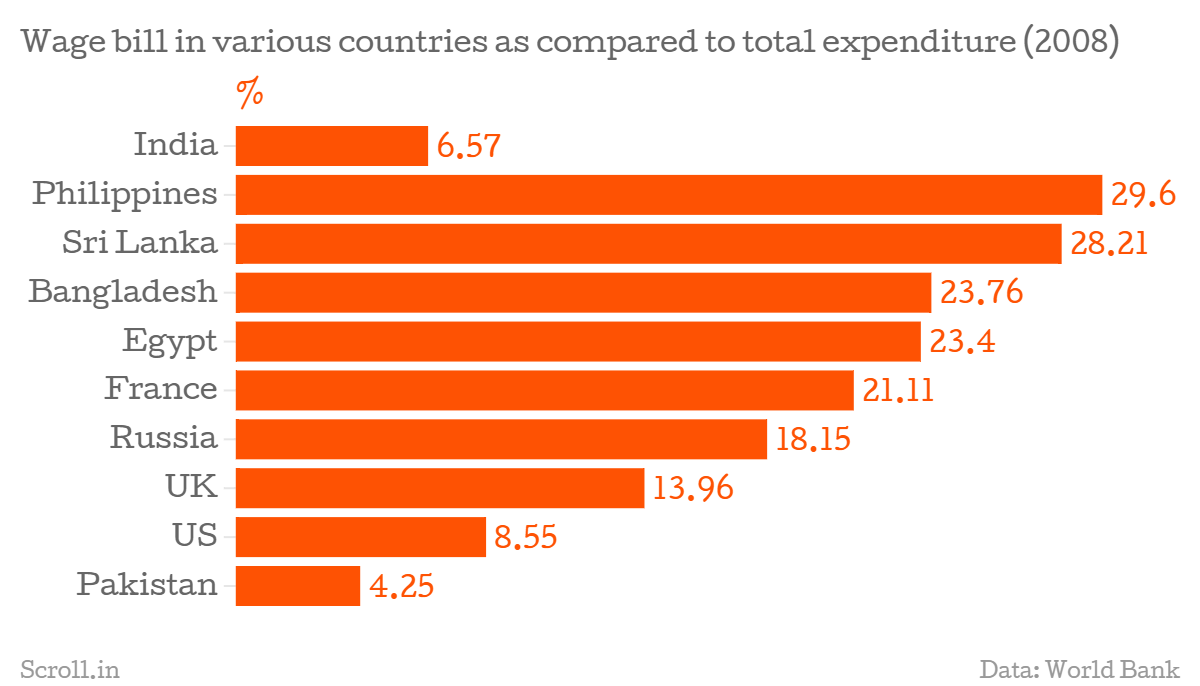 For instance, India spent only 6.57% of its total revenue expenditure on paying wages to government employees in the year 2008.

Acutely aware of the fact that increasing number of employees in various departments could further hit the exchequer, the commission had some words of assurance.

However, critics have long pointed out that the government needs to pay better apart from just hire more people if it wants to compete with the private sector in attracting the best talent. In its annual review of pay structures, Ministry of Finance accepted last year that about one out of five positions is lying vacant across the board in various departments.

Indian Railways, on account of being the country’s largest employer, is set to take up close to 30% of the total financial burden of the new pay commission. While the finance minister estimates this figure to be about Rs 28,000 crore, railways already take up the bulk of the government’s salary budget followed by home affairs department and the defence services.

With the salary bump, the government would hope that it will soothe the government employees, boost spending on consumer goods and curtail attrition rate to the private sector. However, there are some who claim that the spending on salaries is already too high and that these fears of attrition are largely overblown since vast differences in salaries between the two sectors are only observed at the highest level which employs the least number of people.

“The CPC [Sixth Central Pay Commission] found that compensation to Group C and D employees in government was higher than that in the private sector; for Group B it was similar and only for Group A was it lower,” wrote analyst Sonalde Desai in The Hindu last month, making her point through the findings of the previous pay commission. “Group A employees form less than 5 per cent of the total Central government workforce; Group C and D are about 90 per cent. Second, it noted that a government job offers many other benefits not available in the private sector and the fear of flight away from public service towards the private sector is overblown.”

Desai also contended that the current salary bill is already equal to the cost of all subsidies provided by the government under important programs such as food, fertiliser, oil subsidy.

Don’t believe the headlines about the 'world’s cheapest city'