Contribute Now
Ad
On Wednesday, scientists confirmed that the ongoing El Niño phenomenon – when rising temperatures in the Pacific Ocean cascade into droughts, floods and storms across the world – is the strongest ever recorded.

An El Niño is declared when the temperature in a part of the Pacific Ocean off the coast of South America is just 0.5 degrees above average. At three degrees celsius above normal, it now outstrips the previous record of 2.7 degrees in November 1997.

The El Niño Southern Oscillation refers to a change in temperatures around March in the Pacific Ocean that has this year indirectly caused Indonesia's devastating (and ongoing) forest fires, droughts in Australia and India, floods in Peru and is one of the reasons 2015 has already become the hottest year on record.

The oscillation has two distinct forms. The El Niño occurs when temperatures rise in the ocean off South America. This weakens trade winds travelling east, which among other things reduce the strength of monsoon winds forming near Indonesia. Its opposite, La Niña, is associated instead with cooler temperatures that in turn intensify trade winds and hurricanes. 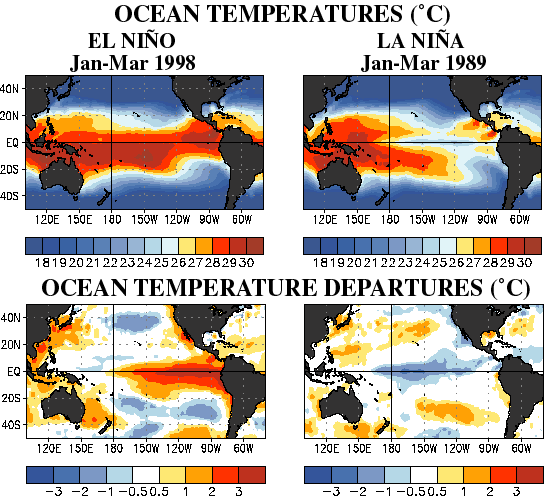 Though the temperature in that critical region of the Pacific Ocean is still rising and could result in another devastating year of poor monsoon in India, we might actually be very near the end of this phase. As Business Insider points out, several prediction models indicate that in nine months, the El Niño will have rapidly reversed and instead become a La Niña.

How important is the monsoon to India? The central government in its annual Crisis Management Plan this year pointed out that drought-prone areas cover a whopping 77.6% of the country's 329 million hectares.

The ongoing drought in India has been among the most severe in recent memory. Several parts of the country, including the central Deccan plateau and parts of northern India, have not had normal rainfall since 2012, many of them in consecutive years.

As weather forecasters remind us each year, the Indian monsoon is notoriously tricky to accurately predict. While other factors such as the Indian Ocean Dipole and the Madden-Julian Oscillation also influence how the monsoon develops, the El Niño remains a key indicator of the relative strength or weakness of the monsoon in a given year – provided researchers can figure out exactly how the two are related and how they interact with other dynamic factors.

For several decades, researchers predicted the strength of the coming monsoon as a direct correlation to the strength of the El Niño and so were able to forecast droughts. This worked very well until the 1990s, when suddenly the correlation seemed to invert entirely and despite powerful El Niños, the monsoon remained unaffected. In 1997, which until now was the strongest El Niño on record, there was no drought in the subcontinent.

Researchers at Columbia University solved a part of this puzzle in 2006, with a paper in Science. The strength of the El Niño, they found, is not as important to the monsoon as its relative location in the Pacific Ocean. The farther west from the South American coast the temperature rise occurred, the more impact it had on monsoon winds forming in Asia.

Balaji Rajagopalan, one of three researchers who discovered this, acknowledged in an interview to Colorado University, that other factors could also cause variations in the monsoon. However, he said, “El Niño is still the 600-pound gorilla that moves the monsoon.”

And this year, it was larger than ever.