Become a Member
Ad
In the smoking room at the Kathmandu airport, there were no matches or lighters to be found. People stood around lighting up from other cigarettes, passing the torch, as it were, and keeping the flame alight. It reminded me of a story in Jonathan Safran Foer’s Everything is Illuminated where a group of smokers, the Wisps of Ardisht, are exiled to the rooftops. Under attack during the World War, the smokers turn hysterical as their matches run out, until a child realises that one cigarette can be used to light another and they get a schedule in place. Perhaps this is too sentimental an analogy for the situation in Nepal, but it aptly comes with an “injurious to health” warning.

Ever since New Delhi imposed an informal economic blockade on Nepal in September to coerce the country into making concessions in the new constitution for the Madhesis who live in the Terai region bordering India, the Himalayan country has found rough-hewn ways to function.

A black market has emerged to supply fuel and cooking gas to those who can afford the steeper prices. Hospitals have reportedly cut down on surgeries due to a medicine shortage. And as winter sets in and daily power outages last up to 18 hours even in Kathmandu, the main source of hot water, besides the weather-dependent solar geysers, are LPG cylinders.

The cold is looming like a dark cloud over the economically underdeveloped country that is yet to find its footing after the deadly earthquake in April. Outside of Kathmandu, many people are still living in relief camps and medicines are still running scarce. 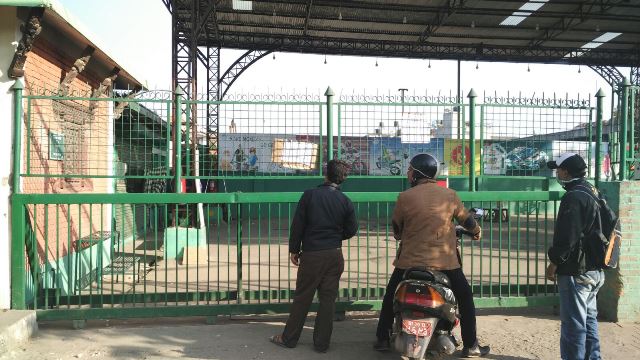 I spent two months in the Nepalese capital last summer on an internship and have seen that even without an earthquake, political protests and blockade, the nation struggles. This year I returned to attend the documentary film festival Film Southasia, organised by the Himal Southasian trust, from November 19 to November 22. A packed four days of film viewing left little time to fully explore the conditions in the city, but still it was difficult to miss the signs.

At a dinner out, I was greeted with “no fuel” or “no gas” menus. A notice outside our hotel regretfully asked the guests to cooperate if some needs were not met since “the whole nation is passing through a crucial situation in terms of supplies blockade”.

There was no animosity towards visiting Indians, but there was palpable anger against the Indian government. Shopkeepers openly accused Prime Minister Narendra Modi of being the cause of their troubles. One likened him to a snake that lures its prey by appearing attractive but is ultimately harmful. The prime minister’s visit to the UK in November drew many Nepalis into the streets to protest against him.

In Kathmandu, people have resorted to unique forms of protests to criticise India’s involvement in Nepal’s internal problems. Last month, some residents donated petrol to the Indian embassy. At the Pashupatinath shrine, a satirical puja, complete with mantras and chants, was organised by civil society members to absolve Modi of his sins. 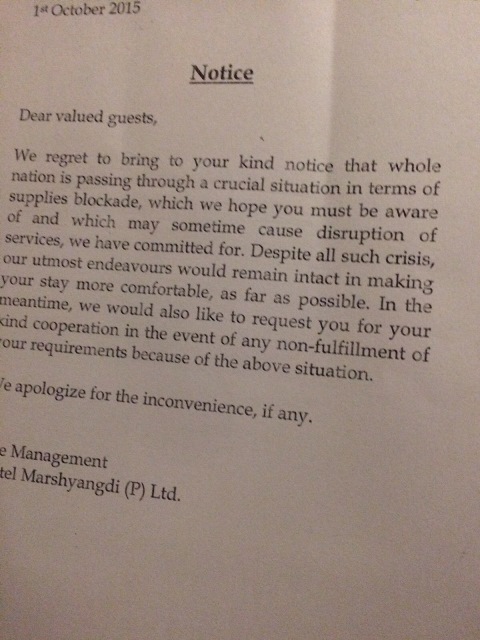 The landlocked Himalayan nation has suffered from years of political volatility. After a decade-long civil war culminated in the end of the Hindu monarchy, Nepal adopted an interim constitution in 2007. That did not bring stability, though. As journalist Prashant Jha notes in an interview to The Diplomat magazine, “Nepal has had six constitutions so far and the problem in Nepal has not been writing the constitution but the ownership of constitutions.”

Finally, in September, after years of wrangling, a new constitution was adopted by the Constituent Assembly. Many reports said it was this year’s earthquake that catalysed the reconciliation.

Soon after this, the Madhesis and Tharus – the people of the Terai region – launched protests against their lack of representation in the constitution. Shifting to a federal structure, the constitution divides the country into seven provinces, with clear lists of legislative powers for the central, provincial, and local bodies. The resource rich districts of Morang, Sunsari and Jhapa have been cut out from the Terai state and this is a major point of contention.

So far, the government’s attempts at opening a dialogue with the protesting groups have not ended in a resolution. The agitations have crossed the 100-day mark, and trucks carrying medicines, among other things, are stuck in border towns. Unless something gives soon, and India lifts its informal economic blockade, Nepal is going to suffer a very cruel winter.