Contribute Now
Ad
The whole family sweated it out. Women and children joined in when the men grew tired of pushing the handle that was churning the wheel and pulling up rocks from the bottom of the well.

The patriarch of the family, Sajan Rai, was down at the bottom of the well, about 40 feet deep.

With two others, he was tugging at the rocks that had come unstuck after two rounds of explosions had blasted through them.

Deepening a well is not an easy task, but the family was determined to bore through 10 feet of earth – it was their only hope of finding water to irrigate their fields.

The monsoon has failed over large parts of north-west India. In Madhya Pradesh, 23 districts have been declared drought-hit. One of the worst affected is Tikamgarh in the north of the state, where the rainfall has been 52% below normal. According to the Ministry of Water Resources, the district gets 90% of its water requirements between June and September. 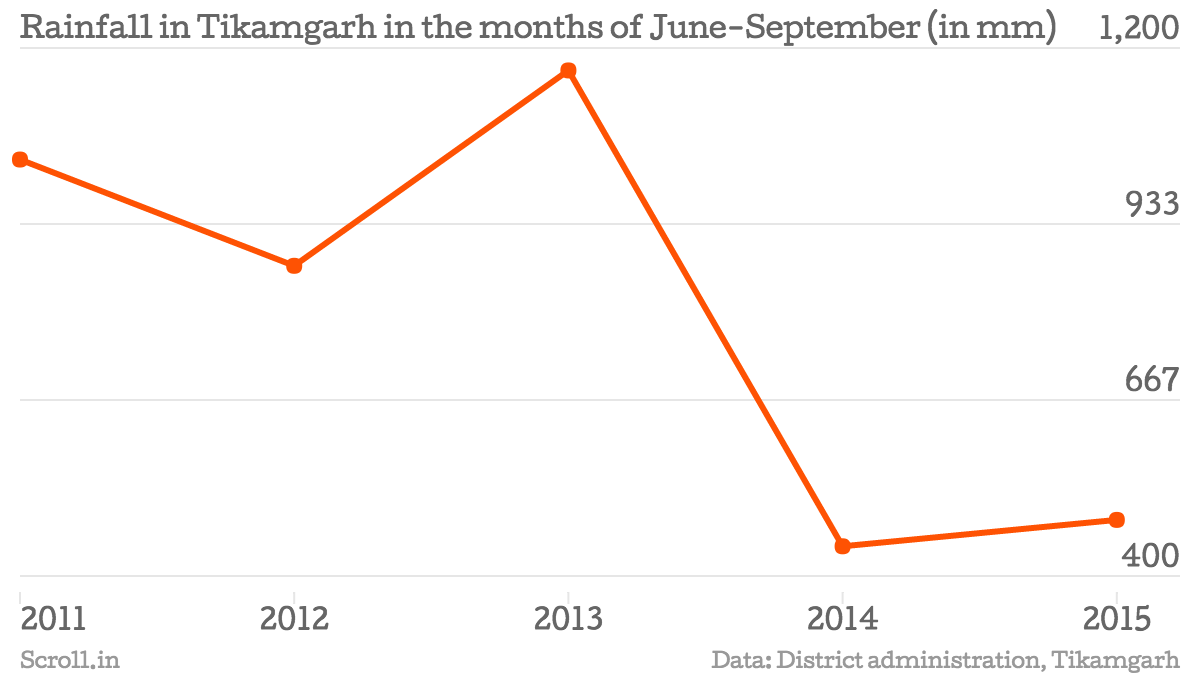 What has made the situation alarming, said district officials, is that this is the second consecutive year of abysmal rains. “The rainfall in 2014 was even lesser than 2015,” said Bhanu Prakash Sharma, the deputy director of agriculture in the district. “But the excess rainfall of 2013 had filled up the reservoirs and wells, and farmers managed to cultivate their crops by drawing water from them.”

In the absence of a major river or dam, Tikamgarh depends on reservoirs and ground water for irrigation. Some of the reservoirs and tanks, built by the Chandela kings who ruled the region between the 9th and 12th century, sprawl over 40 hectares – about the size of a hundred football fields.

But this year, the reservoirs have visibly shrunk and ground water levels have fallen. Last year, according to the irrigation department, the district had enough water to irrigate 35,000 hectares of crops. This year, the water can irrigate 6,000 hectares at best.

Anticipating a drinking water crisis next summer, however, the district administration has decided to not even use that. It has placed a ban on farmers drawing water from the reservoirs for irrigation, or sinking new tubewells – in effect, ensuring farmers cannot plant the winter crop of wheat. “The rabi [winter crop] sowing has happened in less than 10% area,” said Sharma.

Only those with fields near the rivers Jamani and Dhasan have been able to plant the crop. Or those like the Rais who have private wells and tubewells – provided they still hold water.

"The irrigation department has reported that a tubewell, when switched on, would pump water for one and half hours before running dry," said Sharma.

In that case, shouldn't the use of private sources of water for irrigation be banned too? Shefali Tiwari, the district public relations officer, said that wasn't possible under the law. "But farmers are wise enough to understand the need for conserving water for drinking," she said. "After all, they would not want to put their own families at risk." 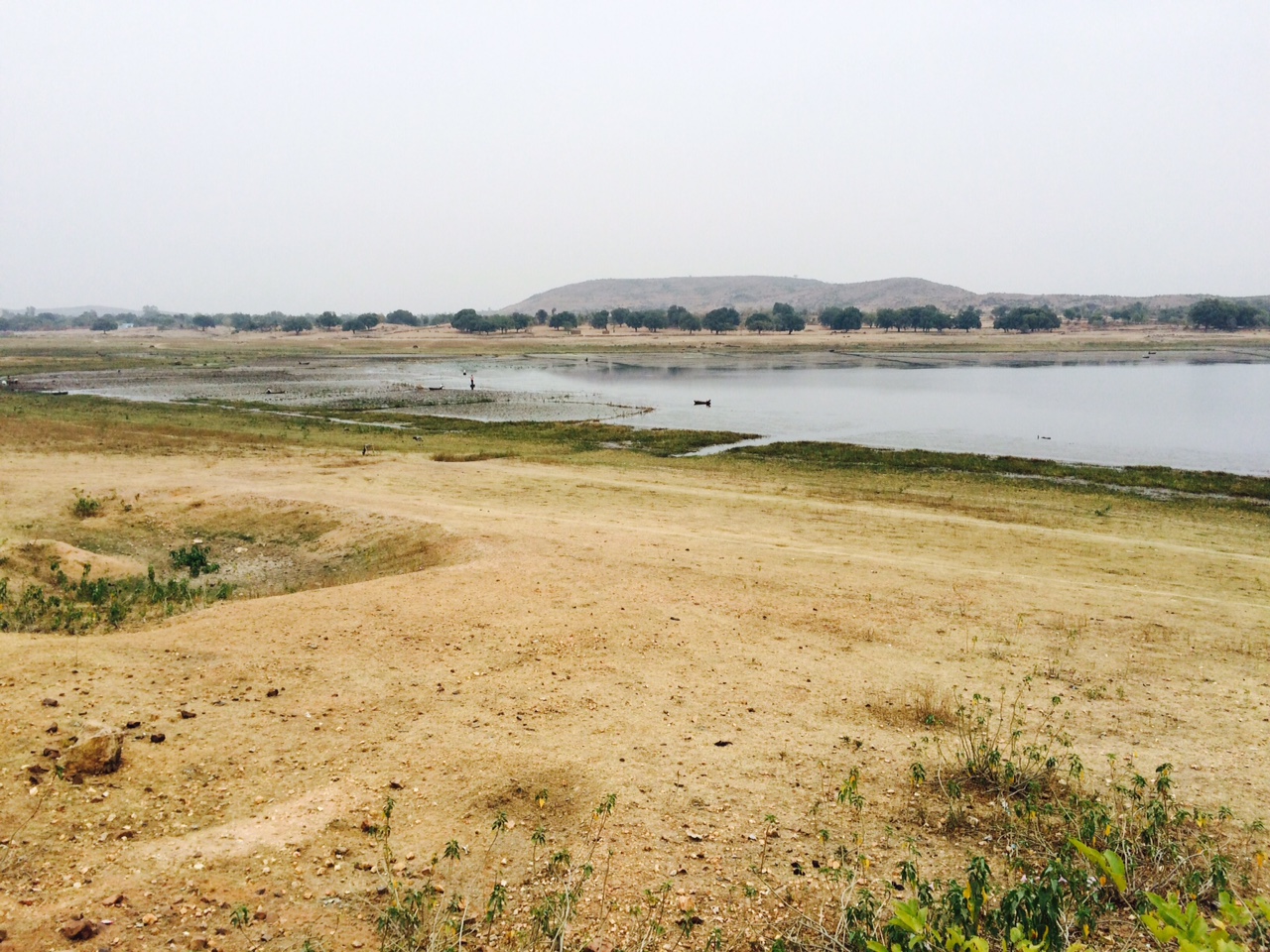 The reservoir at Mohangarh did not fill up in the rains.

In the villages, opinion is divided over the administration's restrictions on water use.

Archana Soni of Mastapur village supports the administration's move to keep public reservoirs of water for drinking purposes. The village lies in Jatara block and is home to about 4,000 people. Only four of the 16 wells in the village have water, the middle-aged woman said. "By summer, even this water could run out. Humans can migrate but what would happen to the animals?"

In the barren countryside, herds of cattle can already be seen scouring for water. "Only the milk-giving animals have been kept at home," said Soni. "The others have been set free. It's impossible to find fodder for them."

But others living in the vicinity of the large reservoirs are agitated with the ban. "Please write down the names – Nadanwara, Kumehdi, Barana, Karri – all these reservoirs still have water," said Hanumant Singh Yadav, who owns six acres of land in Ranipura village. "Why aren't farmers being allowed to draw water from them?" 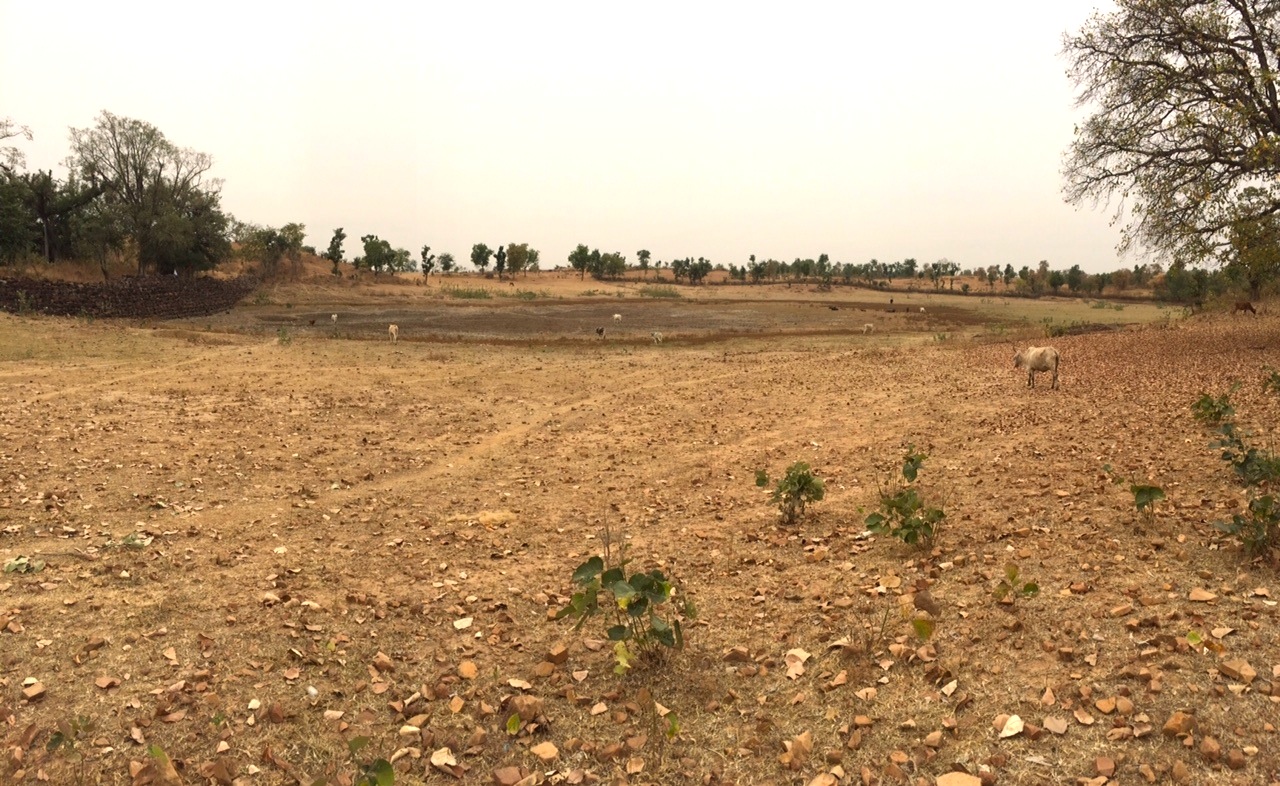 The village pond at Achchara village has dried up. A herd of cows descended on the pond but found no water.

Farmers are anxious because not cultivating the winter crop of wheat would mean depending on the state for their food requirements. Unlike neighbouring Uttar Pradesh, where the National Food Security Act 2013 is yet to be implemented, Madhya Pradesh was among the early states to implement the law which entitles ration card-holders to five kilos of foodgrains per person at subsidised rates every month. Eighty percent of its rural population is eligible for food rations under NFSA. About 51 million people have been already identified as beneficiaries, according to a statement on the website of the department of food of government of India.

That perhaps explains why in the villages of drought-hit Lalitpur district in Uttar Pradesh, many poor people complained of not having ration cards, but there were fewer such complaints in Tikamgarh. The Sehariya adivasis in Mastapur village showed their cards and said they were getting monthly rations regularly. "Instead of 30 kilos, it could be 25-28 kilos," said Sevanti Devi. "But it comes on time."

For many families, however, the question is whether the government rations are enough. "What does five kilos of foodgrains in a month amount to?" asked Gulab Vishwakarma, a marginal farmer who was planning to migrate for work soon.

Across villages, people confirmed that dal and milk consumption had nosedived. "There is no milk even for children," said Archana Soni. "People are buying tins of milk powder for 40 rupees." 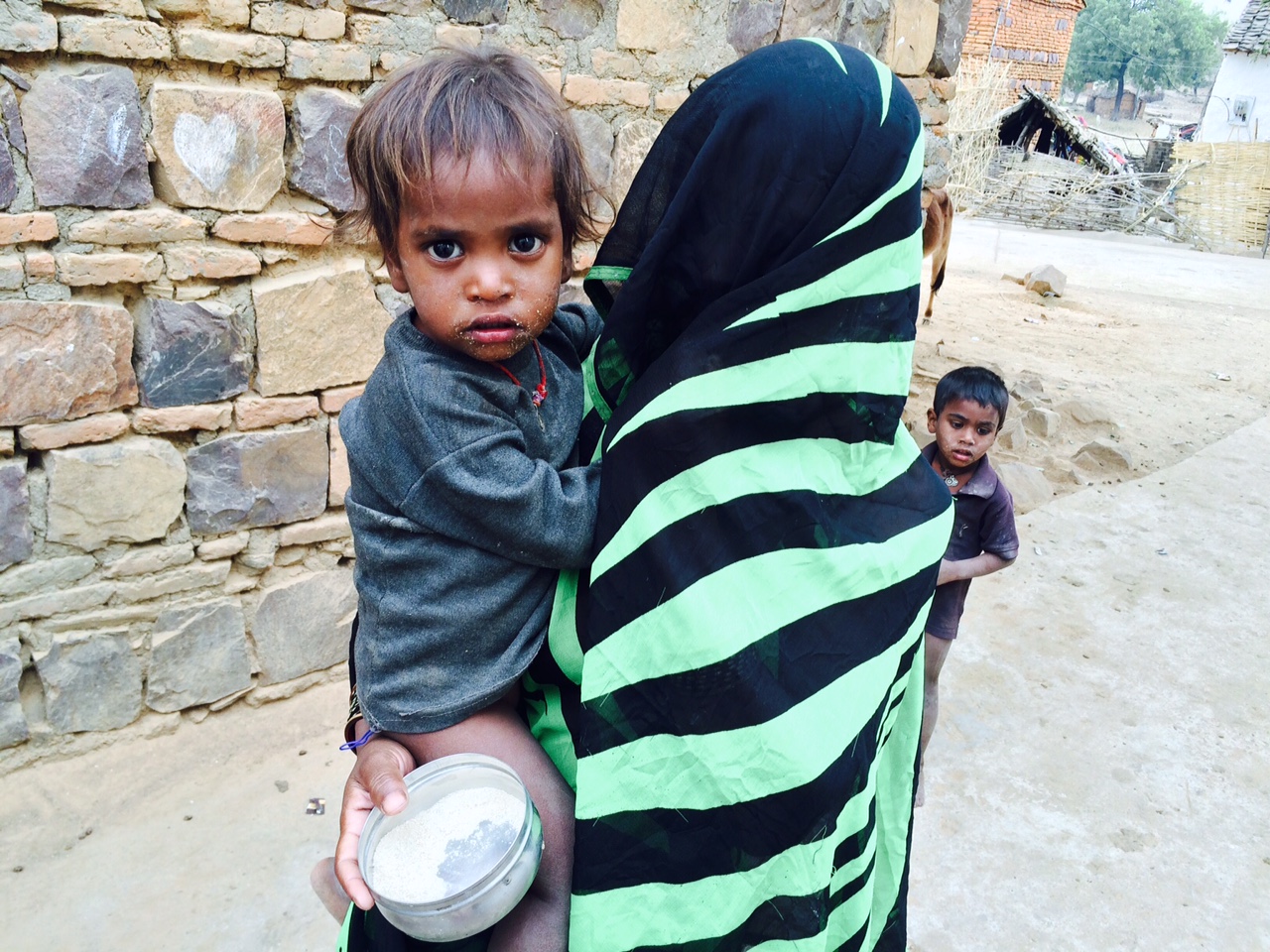 In Mastapur village, the local anganwadi does not supply daily hot cooked meals as it is supposed to. But people are happy to at least get a packet of ready-to-eat powder every month.

It's not just food and water that's running low. The people of the area are facing a cash squeeze. The lack of rainfall has devastated the monsoon crop of urad dal and soyabean. "People have not even been able to recover their investments," said Virendra Kumar Kewat, the pradhan of Ranipura village.

Official statistics capture the scale of the devastation. "The yield per hectare in 2013 was 868 kilos," said Sharma. "This year, it's down to just 375 kilos."

Mandi arrivals of soyabean across the state were 35% less than last year, said Prem Chand Meena, the state's commissioner for agricultural produce.

These statistics alone should spur the state to provide speedy compensation to farmers. For the record, Madhya Pradesh Chief Minister Shivraj Singh Chouhan has made the right noises, repeatedly stating that relief payments to farmers should be made "on a war-footing". He visited Tikamgarh in the last week of October and is scheduled to make another visit to the district this week.

But on the ground, despite his visits, the payments to farmers are stuck.

Overlooking a large reservoir, set against the fort of Mohangarh, is a decrepit government building which functions as the office of the tehsildar, Lokendra Srivastav. In his fifties, Srivastav knows the Rajasv Pustak Parpatra, the Revenue Manual, well enough to be able to cite from it without even looking at it. "Section 6, sub-section 4, says relief would be given as per the rules," he said.

Was this enough given that local farmers cited the cost of cultivating two hectares of urad as anywhere between Rs 10,000 and Rs 15,000? "That's why this is called rahat or relief," said Srivastav. "It's meant to help the farmer, not compensate him for his losses." 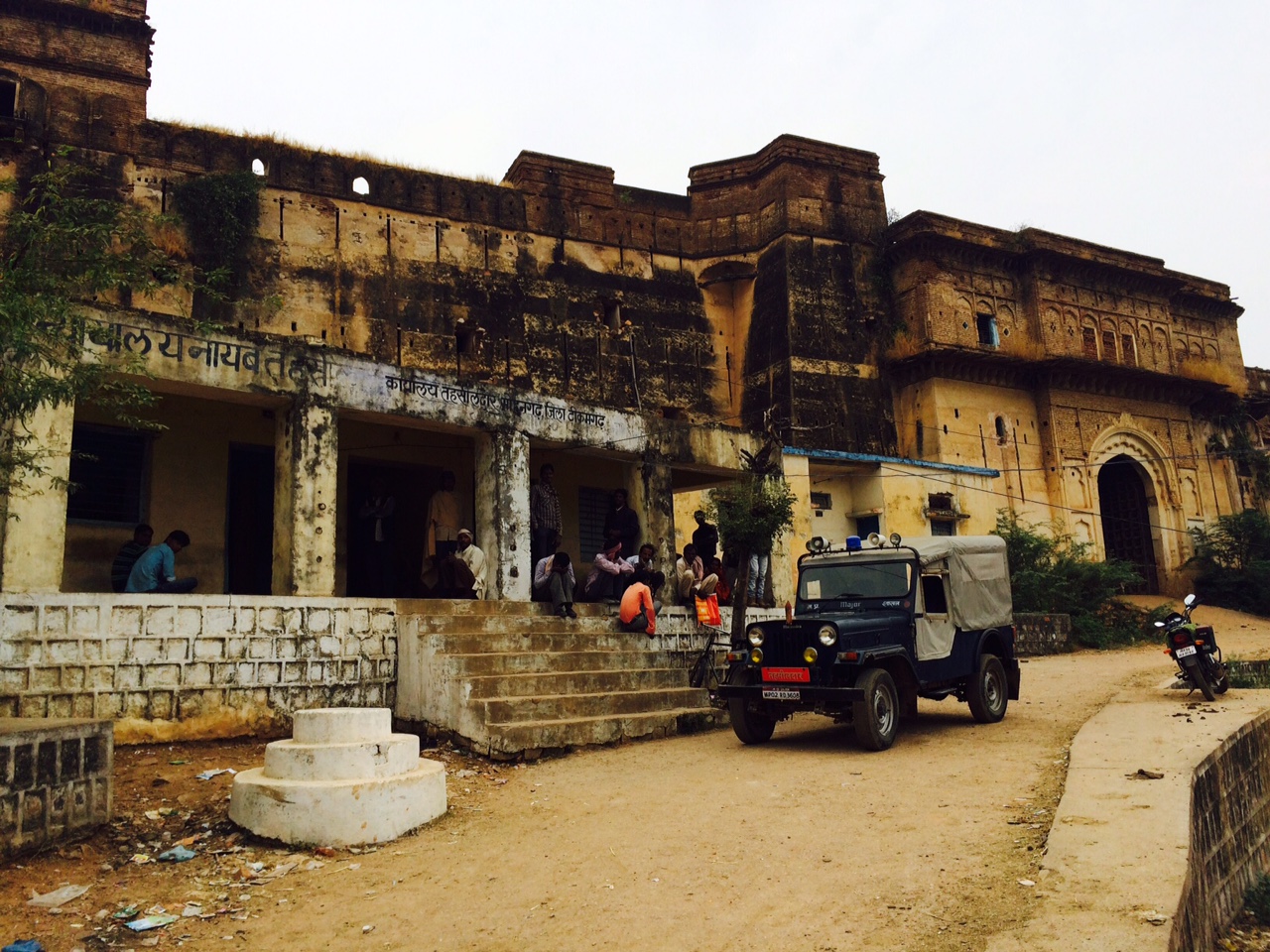 Even this meagre relief was yet to reach farmers. "We are yet to get a rupee," said Shivraj Bunkar of Mastapur village.

The administration of Tikamgarh has asked for Rs 175 crore for relief payments. According to Sharma, the first instalment had already reached the district coffers. But its distribution had been delayed on account of an indefinite strike by patwaris, the ground-level revenue officials, who were asking for higher salaries.

Tikamgarh has 27 revenue circles but just 18 patwaris. One circle encompasses an average of 500 hectares, or five square kilometres, said Srivastava. With fewer patwaris, the area under each would be larger. The understaffing perhaps explains why the process of estimating crop damage and providing relief payments is slow, regardless of whether or not there is a strike.

Not only is the process slow, it is also inaccurate. Officially, the patwaris are meant to estimate the losses using crop-cutting – or measuring the output in a five-by-five metre plot of farmland and comparing it with the average yield in the area. But this method is rarely followed. "Eye estimation" or a cursory survey of the farmland is more common, admitted officials. "Bas nazar bhar dekh lete hai."

Farmers claimed even eye-estimation rarely happened. "The patwari does not survey the fields," said Yadav, the farmer in Ranipura. "He sits in his office, or with the powerful people of the village, and depending on who's willing to pay him how much [as bribes], he decides what to note down as the crop damage."

Srivastava denied the charge. "The patwari has to take down signatures of the farmers. How would he do that without going to the village and meeting them?"

To this, Yadav scoffed and said it does not take much to fake thumb impressions. 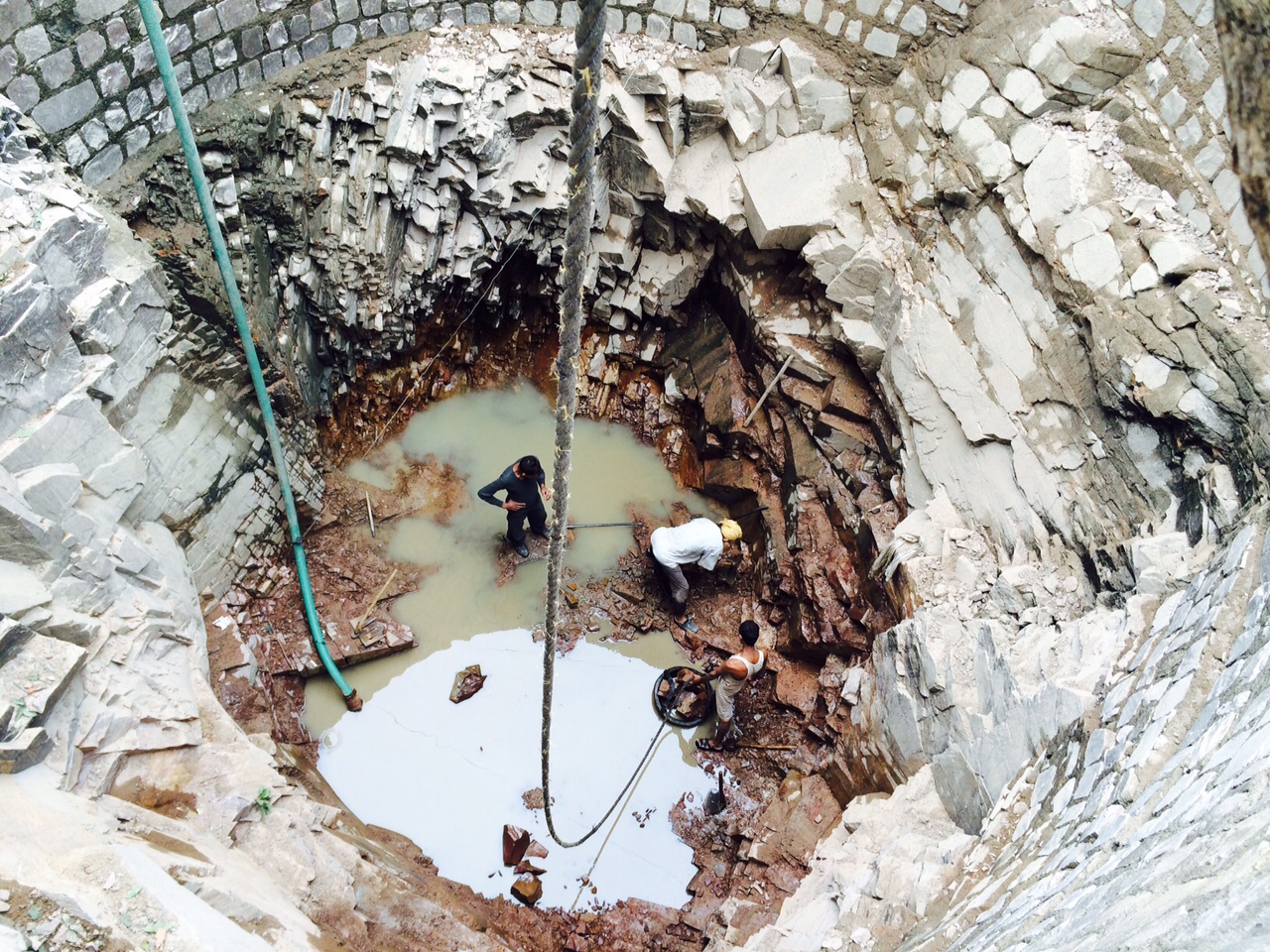 It is hard work to deepen a well.

After ten days of hard drilling, and having spent Rs 8,000 on the explosives, the Rais had managed to make only a small dent in the rocks.

Water had started to trickle out of the corners but the flow was nowhere close to what was needed to fill up the well.

Around lunch time, Sajan Rai, the family patriarch, emerged from the bottom, exhausted. "Looks like we might need to carry out at least another ten rounds of explosions," he said. With each round costing Rs 3,000-4,000, this amounted to a heavy expenditure that few could undertake in a difficult year. Few, except the state.

So far, seven state governments have declared drought. Six states, including Madhya Pradesh, have sought assistance from the Centre. In the last week of November, the Union Agriculture Minister Radha Mohan Singh told reporters that a central team was visiting the state to assess the extent of damage.

Getting funds from the Centre might be the easier part for Chouhan's government. Using them well to make sure the most vulnerable people are protected would be far tougher.

In drought-hit Marathwada, villagers depend on tankers for water, farmers cut down fruit trees