Contribute Now
Ad
The boards of listed Indian companies are mandated by law to appoint independent directors – and only for a fixed tenure. But a large number of them simply do not comply.

The new Companies Act, 2013, mandated that at least one-third of the total number of directors on the board of any listed company should be independent.

If the 10-year cap on tenures is considered along with the stipulated number of independent directors, then 54% of companies of the S&P BSE 500 companies are non-compliant.

Here are the top 10 independent directors with the longest tenure. 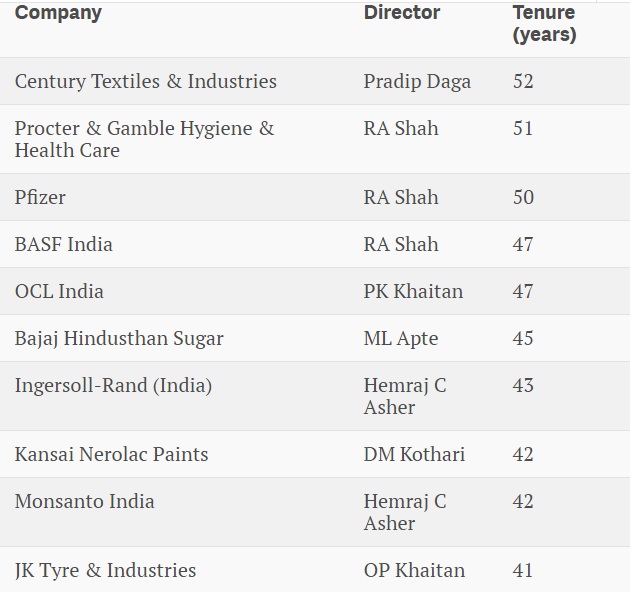 “An unbalanced board composition implies that key board committees like the audit committee and nomination committee, which are responsible for reviewing financial statements, approving related party transactions and appointing board members, are left to function without an independent oversight,” the report noted.

The integrity of corporate boards in India is constantly weakened by the tendency of Indian companies to get the promoter’s family into the boardroom.

That was best played out recently when the country’s market regulator, Securities and Exchange Board of India, made it mandatory for all companies listed on stock exchanges to have at least one woman on its board of directors. A majority of companies simply promoted female members of their families to the position of directors.

The IiAS report has more revealing statistics about promoter families.

Almost 66.6% – or 333 – companies surveyed were family-owned, and 83% of chairpersons in these companies belonged to the promoter family.

“This deprives the board of an impartial and unbiased perspective on the company’s operations,” the report noted.

The appointment of young second-generation promoters as executives on the company board is yet another common practice. The report found that 57 companies in the S&P BSE 500 have directors aged less than 35 years, and 75% of these directors belong to the promoter families.

Here are the youngest directors in S&P BSE 500 companies. Not surprisingly, all six names either belong to promoter family or promoter representative. 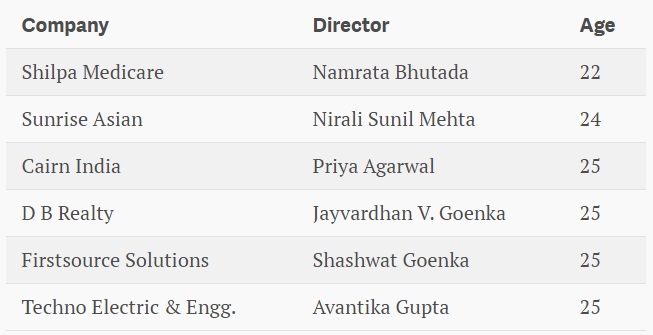 “By virtue of their young age, most of them have limited experience in scaling up large businesses, which may constrain them from effectively discharging their advisory and oversight functions,” the report said.