Contribute Now
Ad
Television journalist Barkha Dutt's first book has a curious rating pattern on the online store Amazon.in. To begin with, it's got an astonishing number of review. Launched just a fortnight ago, Dutt’s This Unquiet Land had more than 2,400 reviews – three times the number as Chetan Bhagat’s Making India Awesome in its four months on the shelves.

The second is the high proportion of negative reviews. Out of the reviews, at the time of writing, a whopping 97% had given This Unquiet Land one star out of five, the lowest rating available on Amazon.

Unsurprisingly, Barkha Dutt contends that this unusual pattern is the result of a “well-organised campaign exhorting people to downvote my book”. On Friday, Dutt took to social media and hit out against such attempts, providing links to large Facebook groups where members had been exhorted to give the book a poor rating.

If this strikes you as familiar, it is. Just three weeks ago, outrage against actor Aamir Khan’s comments on his “growing disquiet” with India’s rising intolerance had let to outraged users on social media targeting Snapdeal, a company Khan endorses. Similar to This Unquiet Land, users on social media started a concerted campaign to downvote and uninstall the company's mobile phone app.

Unfortunately, in the case of Snapdeal, the campaign backfired. Powered by a variant of the Streisand Effect, Snapdeal’s app actually went up in the rankings, significantly. 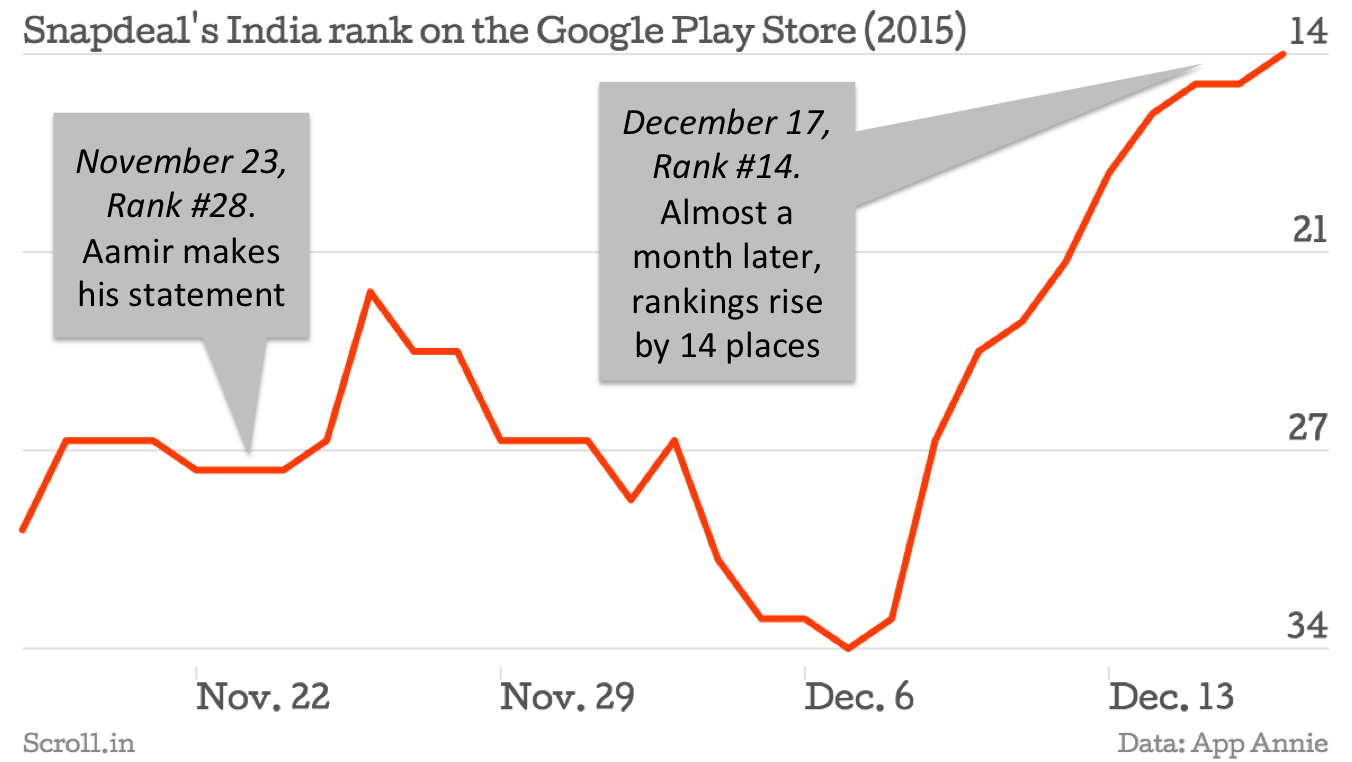 On November 23, the day Khan made his statement, Snapdeal’s India rank in the Google Play Store was 28. In the days after that, as the campaign to downvote the app gained strength, paradoxically, the ranking of the app on the Google Play Store Actually went up, reaching #22 on November 26. On December 17, almost a month after the controversy, the ranking of the app is #14, a significant 14 places above what it was the day Aamir Khan made his statement.

Indeed, much the same seems to be happening for Barkha Dutt’s The Unquiet Land. In spite of so many poor rating and fiery reviews (some of which border on the comic), the book itself was the #1 bestseller in the politics category at the time of writing.

There was, however, one unfortunately side-effect.

Facepalm. Author Ron Duffy is getting 1 star reviews on his book because of the same name as @BDUTT 's book. pic.twitter.com/DRgbkf5J7t

The instant nature of social media gives it a powerful voice. The Indian media often uses as a barometer for society itself. But in a country where both Internet access and English language education are limited, just how accurate is this?

Recently, even certain sections of the Bharatiya Janata Party have pointed to the pointlessness of social media outrage ­– ironic, given the overwhelming political bent of Twitter users towards the party.

Member of Parliament Anurag Thakur, who is also president of one of the party's youth wings, said that social media did not represent the "sense of the nation" as he was attempting to explain why India has been more willing to engage with Pakistan of late, especially over cricket. A week later, BJP MP Chandan Mitra, who is also the editor and managing director of the Pioneer, mocked social media users as “some people with nothing very much better to do express their opinions on various subjects” and denied that they have any actual influence at all. On Monday, Foreign Minister Sushma Swaraj took on social media outrage over her speaking in Urdu in Pakistan and even wearing green.

Barkha Dutt says she went public with examples of the concerted campaign to stand up to what she saw as bullying. “What sort of environment do we live in where a personal dislike is equal to a bad review," she said. "This is nothing but intellectual intimidation by an Internet mob."

Of course, as examples from Snapdeal to Chandan Mitra show, social media users might act like bullies but the phenomenon is better understood as a modern-day Wizard of Oz. It’s as tall as a giant with a booming voice, spewing fire and smoke. But behind it is a harmless man pulling all kinds of trick levers and the booming voice as it turns out, is nothing but a megaphone.