Contribute Now
Ad
As flood waters recede from Chennai after a prolonged spell of heavy rains, the role of unwise land use in the city’s predicament is becoming clearer. While not much can be done to salvage an overbuilt city, these mistakes can be avoided in other places. But in their hurry to industrialise, the Central and Tamil Nadu governments appear set to repeat past errors.

On November 24, Union Power Minister Piyush Goyal announced that bidding for the 4,000 mega watt coal-fired Ultra Mega Power Plant in Cheyyur, around 100 kilometres from Chennai, would begin in three months. On the same day, the taluk in Kanchipuram district recorded 14 cm of rainfall. The downpour was not unusual for this time of year. Rainfall of similar magnitude had already brought Chennai to its knees. But while Chennai had built on water bodies and obstructed water courses, Cheyyur’s wetlands are for the most part intact and in decent repair.

Earlier that month, three spells of rain had already sent more water into Cheyyur’s numerous eris, or irrigation tanks, than the region had seen in three years. But for R Ravichandran, a farmer from Vedal village and local ward member, the rains were not enough. “We need another 1.5 feet to send water into the irrigation tanks. A few more good rains should do it,” he said hopefully.

Ravichandran’s prayers were answered. On December 1, Cheyyur recorded 38 cm of rainfall. The irrigation sluices were opened to flood the paddy fields.

That day in Chennai, water ran through roads and subways and flooded the airport and people's homes. In Cheyyur, the water was content to run through canals and streams, staying in ponds, wells, irrigation tanks, paddy fields and backwaters.

Where rain is welcome

Cheyyur is a coastal taluk not unlike Chennai of a century ago. The undulating terrain between the low hills to the west and the sea contains numerous depressions. These were carved out into eris (irrigation tanks) and ponds to harvest the east-flowing waters for agriculture and drinking purposes. The Public Works Department has recorded 81 irrigation tanks in Cheyyur, with a combined command area of 16,200 acres. The famous Vedal eri was built during the reign of King Raja Raja Chola in 10th century.

Nearly 70 of these irrigation tanks fall within the same watershed and eventually drain out to sea through the Odiyur lagoon and the mangrove-studded Mudaliarkuppam estuary. The lagoon is massive – 10 km long by 5 km at its widest – and biologically rich. Seagrass beds – which can absorb as much carbon as rainforests do – abound in the lagoon.

To the east, two rows of tall dunes run along the coast. Vilambur and GD Kuppam villages lie nestled between the two dunes. By storing freshwater, shielding the sea from invading aquifers and blocking the corrosive sea air from harming crops, the dunes are what make the two villages famous as vegetable and horticultural hotspots.

All these villages lie around the epicentre of the proposed power plant. The wetlands, sand dunes and mangroves here are natural shock absorbers that protect the area equally during times of plenty and of scarcity. The onset of the monsoon is celebrated in these parts.

But this will change if the Union power minister’s dream comes true.

The proposed power plant is to come up on 800 acres of land adjoining and encroaching the Odiyur lagoon. The plant site sits exactly at the point where waters from a third of the catchment enter the lagoon through surface flows and a prominent drain called the Keluthi Odai.

If Piyush Goyal were to visit the plant site now, he would find it under water. And that is how it should be. The water belongs here. If the power plant is built here and needs to be secured from flooding, water will have to go elsewhere. A site visit conducted on December 10, a week after the rains ceased, revealed that most of the plant and port sites were under water. 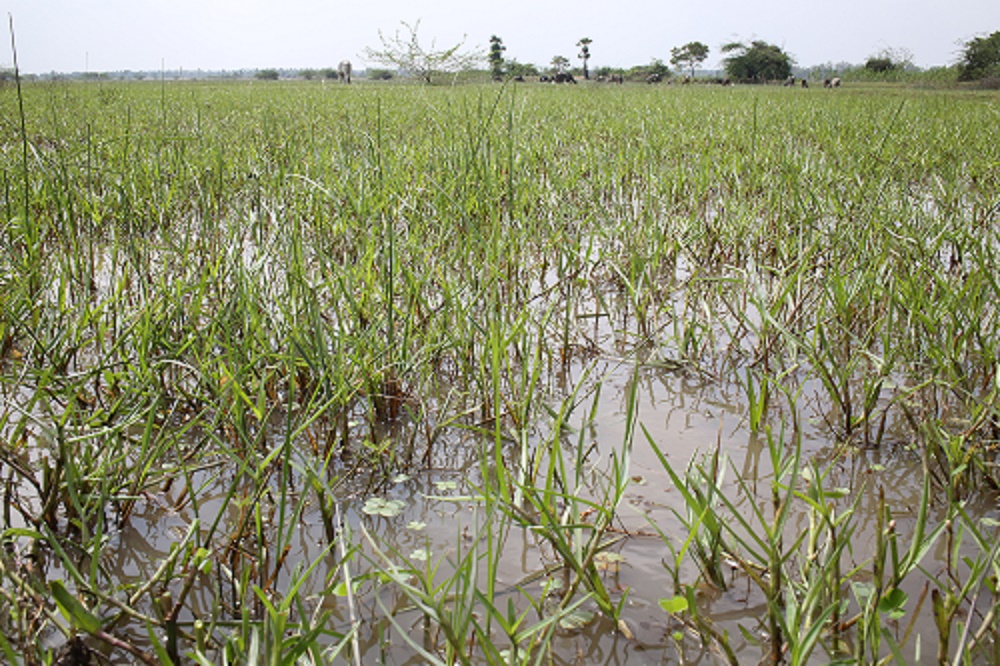 With some deft calculations here and a convenient assessment there, the project proponent – Coastal Tamil Nadu Power Ltd – declares in a scientific-looking “study” that the plant can be flood-proofed by diverting rainwater run-off from the plant site to the sea through an artificial canal.

This canal is expected to climb up and down two 20-metre high hills of sand, cross the East Coast Road, run through the Vilambur village, traverse the Buckingham Canal, climb another dune and run across the sands to reach the Bay. Practically speaking, this stormwater drain is humbug.

In statutory submissions, the project proponent boldly declares that there are no wetlands or waterbodies in the vicinity of the plant, no stream or nullah within 3 km of the site, that a once-in-25-years rainfall of 280 mm is the maximum design rainfall assumed and so on.

The facts are quite different. Vedal irrigation tank is 500 metres to the south of the plant. Keluthi Odai, which drains at least a third of the lagoon's catchment, is the plant's western boundary; the lagoon backs into the plant property. Revenue documents reveal that the plant eats into 160 acres of waterbodies, including channels, streams, backwaters and ponds. Leave alone once-in-25-years rainfall – at 380 mm, the downpour of December 1 exceeded the once-in-100-years rainfall estimated by the project proponent.

Assessments based on wrong assumptions result in disasters. In Cheyyur, “reputed” consultants prepared flawed “scientific” studies; the head of a Government of India-owned company made fraudulent declarations to statutory authorities. A 12-member Expert Appraisal Committee of the Ministry of Environment and Forests claims to have gone through project documents before recommending environmental clearance; the state Public Works Department has issued a No Objection Certificate; the MoEF has granted environmental clearance; a technical sub-committee of the Tamil Nadu Pollution Control Board has recommended grant of a construction licence, and the Tamil Nadu Pollution Control Board has concurred without question. Scientific due diligence has become a ritual and environmental decision-making a farce.

A 2014 report, which I have co-authored, is categorical in its findings and warnings: “Persisting in locating the project here will damage the hydrology, and perhaps even irreversibly contaminate ground and surface water reserves and harm agriculture.”

Piyush Goyal should be woken up. Otherwise, in a not-so-distant December, his dream will become Cheyyur's nightmare.

Nityanand Jayaraman, a writer and social activist from Chennai, is part of the campaign against the 4,000 MW Cheyyur thermal power plant.