Contribute Now
Ad
Despite the widely acknowledged success of the country’s frugal Mars mission, there is a general perception that scientific research doesn’t rank high on India’s list of priorities. While the incumbent government has been criticised for giving the cold shoulder to the scientific community in its most recent budget, a new study has found some bright spots in an otherwise grim picture.

Released earlier this month as part of Nature Publishing Group’s Nature Index in partnership with the Confederation of Indian Industry, the study highlights how India’s scientific community has managed to flourish despite little support from the government. It shows how Indians have managed to get a respectable, if not substantial, amount of research published in international journals.

The new study, while taking stock of prevailing problems, suggests that the negative perception is partially because of a lack of media interest and studies the impact of Indian publications in comparison to the countries with similar spending on science research.

“This perception – of India failing to produce anything of significant scientific value despite a huge young and capable population – is largely based on media interest,” Dr Naushad Forbes, President Designate of Confederation of Indian Industry, said in the study. “Positive stories rarely attract the attention they deserve.” 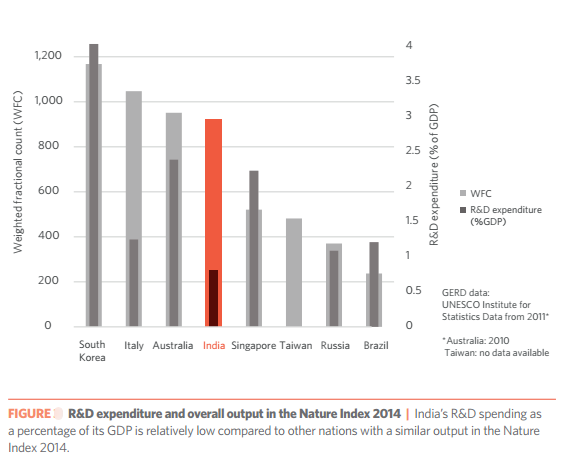 The Nature Index, which tracks research papers published in 68 internationally recognised journals, ranks India at a respectable 13th position worldwide. India has consistently improved its position in the Nature Index over the last three years and currently finds itself ahead of countries such as the Netherlands, Taiwan, Russia and Brazil.

In terms of Weighted Fractional Count – an adjusted index that measures the diversity and impact of research publications – India’s score has risen from sub-800 levels in 2012 to 921.8, only two points less than Australia.

“The growth in Indian output in the index has been achieved despite a stagnation in spending,” the study said. “The country invests less than other comparable countries in this analysis as measured by research and development funding, committing less than 1% of its gross domestic product to research.” 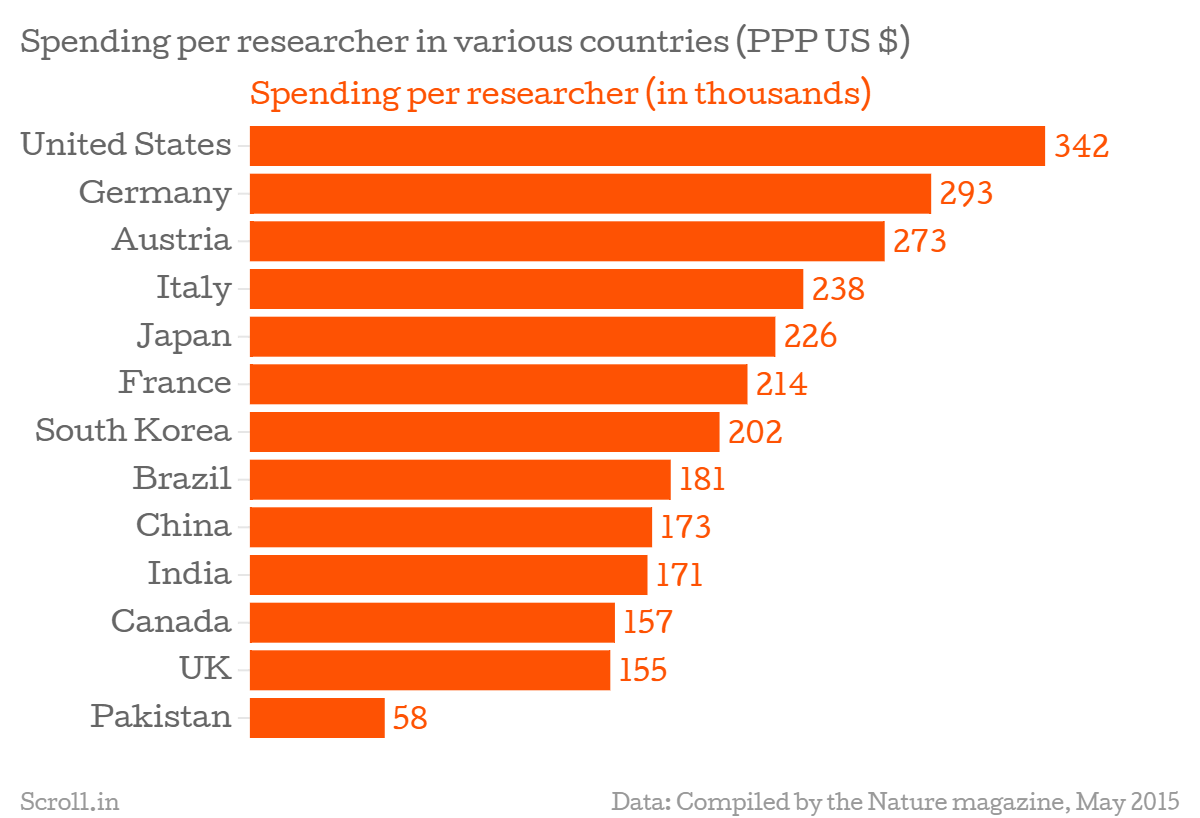 This is in line with the low per capita spending in India on researchers, which the Nature magazine highlighted in its May issue. Even though India’s spending on research has quadrupled in the last 15 years, it still doesn’t match up to countries such as China and Brazil, who have been able to spend much more and faster to boost their research prowess.

According to the study, the Indian scientific community is globally acknowledged when it comes to research in chemistry. India is ranked ninth in the Nature Index for the subject and unsurprisingly, the top 10 journals in which Indian scientists publish their work are related to chemistry and physical sciences.

“In chemistry, India’s top institutions are competitive with those in Europe, the USA and Asia, and stand up to be counted among the world’s top ranks,” the report concluded, adding that 50% of India’s overall Nature Index output comes from chemistry alone.

India's research is more focused on chemistry and life sciences than other areas.

Taking "weighted fractional count" as the measure, the study ranked Indian Institutes of Technology at 24th position in chemistry worldwide,  Council of Scientific and Industrial Research at 30th and Indian Institute of Science Education and Research at 63rd position in chemistry.  These institutions compete with those in China, Singapore and the United Kingdom for top spots in the rankings.

The study also added that the love for chemistry may be a regional pattern observed across countries in the continent. “Overall, Asia’s traditional strength in the physical sciences and chemistry reflects a regional pattern – besides India, other Asian nations such as Singapore, Taiwan and South Korea show a great focus on these subject areas,” it said.

The study concluded that it is ultimately the quality of India’s science institutions that manages to keep the country afloat in the competitive world of research and innovation.

This, coupled with, “good collaborative ties” of Indian researchers with the rest of the world, ensures a steady stream of output in the face of budget cuts and abysmal spending, even as the country constantly tries to punch above its weight. In 2014, for instance, Indian researchers collaborated with researchers from 85 nations –  the largest number of collaborations coming from the United States, with Germany being a close second.

Meanwhile, the study also lauded the government for its positive steps to facilitate more research in some sectors but pointed out that larger issues still remain to plague scientists across the board.

“Despite the funding stagnation, the new government has taken some steps in a positive direction, including establishing tax incentives for research and development that are among the best in the world,” the study noted. “Problems such as bureaucracy, government indifference, unfair appointments (or appointments not based on experience), and lack of resources also continue to dampen enthusiasm. However, despite limited resources and complexities, the international science community is still hopeful for Indian science.”