Contribute Now
Ad
The year 2015 could well have been the year of the cow in India. “Muslims can continue to live in this country, but they will have to give up eating beef… the cow is an article of faith in India,” said Haryana Chief Minister Manohar Lal Khattar in October. The statement came in the aftermath of the murder of a 50-year-old man alleged to be in possession of beef in Dadri. It didn’t stop there. This was accompanied by official bans on cow slaughter in some states, and attacks elsewhere on those who eat beef.

The use of the cow as a “sacred national symbol” by Hindutva radicals has frequently contributed to communal disharmony. But how does the image of the cow get constructed in the public space? What has made this image so volatile and yet influential? What methods were used to construct such an image? And what ideas or emotions does this image communicate to people?

These questions are key in understanding the roots of the public debates and political struggles wracking the nation over the cow. For their answers, we need to look at Indian calendar art.

Originating in the 19th century, calendar art was popularised by artists such as Raja Ravi Verma and BG Sharma, among others. Aside from characters from Mahabharata and Ramayana, calendar art portrayed the cow as an immensely potent and sacred sign of Hinduism. The figure did not just function as a visual substitution but constituted a “gigantic simulacra” where the image of the cow had greater exchange value for its elevated representation than a prototype of God or nation would have. It was again calendar art that propelled the cow as a national symbol and informed the formal organisation as well the ideological basis of the cow protection movement in the late 19th century.

BC Sharma was one of the first artists to produce a calendar image of the cow. His Milching a Cow, made in the 1880s, visually appropriated the ideology of the cow protection movement. It showed all the Hindu gods encompassed in a cow, while a woman milked the animal in the presence of small figures that can be identified as Hindus from their attire.

Through that image, the body of the cow was reconfigured as the divine and reimagined as a new location of worship. The message was: the communities which had no or limited access to temples could worship the images in public and private spaces. As anthropologist Christopher Pinney says, the images were conceived as “corporeal aesthetics”: they weren’t merely visual representations but compressed performances that established a dynamic social relation between the viewer and the viewed. 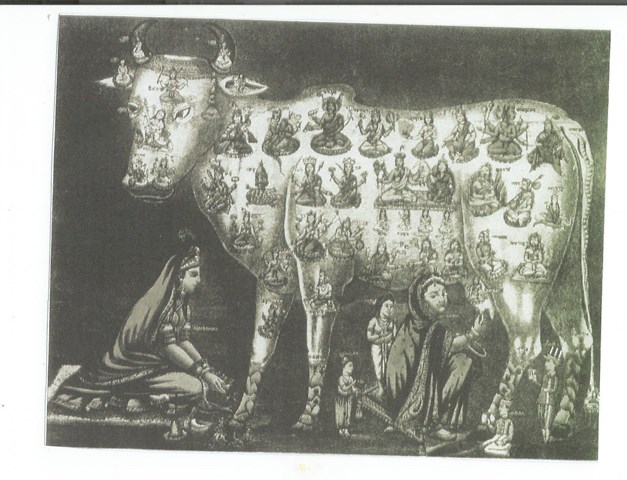 According to historian CA Bayly, calendar art spread further during the 20th century, facilitated by the association of the Vaishnava community – comprising Marwaris, Khatris, Aroras and Bhatias mainly from north and western India – with the Hindu Mahasabha in the 1930s and later with the Jana Sangh. During this period, the image of the cow, which earlier conflated the devotional space for Hindus with the market, was pushed as an inclusive space for all religions.

In the post-independence period, calendar art was reoriented towards establishing a unified and secular identity for India and a collective idea of nationalism. As the Nehruvian nation-state faced upheavals from outside and communal violence at home, the need to form a collective Indian identity trained focus on the image of the cow in calendars.

The state employed these lithographs as a political instrument to build consensus on the ground. They represented the cow as the universal nourisher, associating her with the figure of Mother India. Chaurasi Dev Darshan, a production of Raja Ravi Varma that slightly modified BC Sharma’s calendar art, was reproduced and extensively circulated in 1960. Its highlight was the cow as the abode of 85 Hindu gods, with its body assimilating the many strands of Hinduism cutting across castes, rural-urban divide and elite-poor distinction into one unified figure. 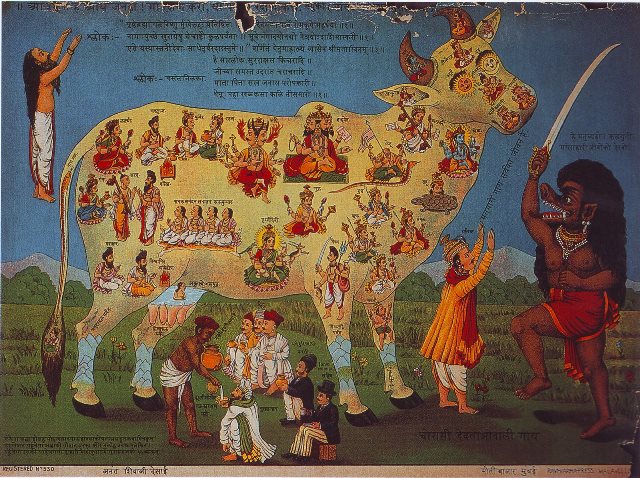 An attempt to establish brotherhood and harmony among Sikhs and Hindu led to the production and circulation of a calendar art in 1976 that portrayed the figure of the cow accommodating 10 Sikh Gurus in its body. The Khalsa symbol was placed on the cow’s forehead and the sign of Bhakti devotion across her muzzle. The cow’s glided horn was a nod to the architecture of the Gurudwara, and the leaders of the Sikh religion were strategically placed on the different parts of the cow that are identified with the caste distinctions in the religion.

While some scholars argued that this image was an example of Hinduism encroaching on Sikhism, others were of the view that this was a Sikh using Hinduism to convey something to the non-Sikhs. Sociologist Patricia Uberoi, for one, notes that a Sikh politician believed the image was employed by the Rashtriya Swayamsevak Sangh to saffronise and to absorb Sikhism into Hinduism. 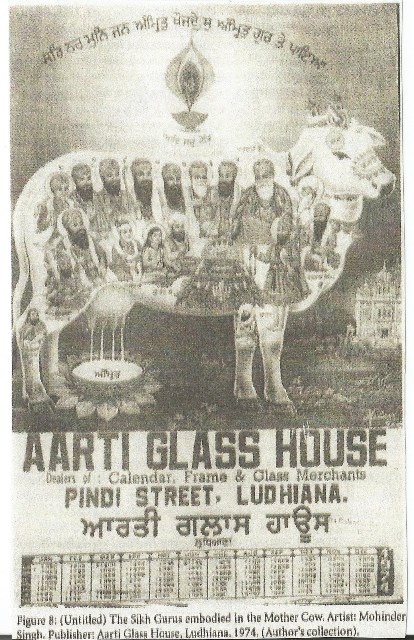 From the communal riots of 1880s and 1890s to the demand for a national ban on cow slaughter in the 1960 to Vinoba Bhave’s hunger strike for a cow slaughter ban in 1979, many political contestations have unfolded around the figure of cow in India.

In present times, cow has been transformed into a flashpoint of political conflicts. As elements in the current government seek a ban on beef eating, an attempt is being made to manipulate public opinion to suit the Hindutva ideology and sustain a divine image of the cow. If this propaganda manifesting hatred has to be opposed, there must be counter-propagation of ethos of plurality and multiculturalism among the public.

The writer is a post-graduate fellow at the School of Interdisciplinary Area Studies, University of Oxford. She has contributed to several national and international publications, including OpenDemocracy, UNPost and Mainstream.