Dec 23, 2015 · 02:30 pm
Research Unit for Political Economy
Virtually the entire discussion among economists on defining the middle class in “emerging economies” pertains to levels of consumption expenditure or income. No doubt, income is a relevant indicator, but not when taken in isolation.

None of them attempt to base the definition on the concerned section’s relation to the means of production, and its place in the social organisation of labour. Thus, we are left with a motley conglomeration of people linked only by (very broad) income group, but with little else to connect them in social terms.

The problem with such a definition is that it gives us very little useful information about the nature of the society.

These studies acknowledge that there is no generally accepted definition of the middle class. So each sets about devising its own definition. Broadly, they adopt one of two methods. A few define the middle class in relative terms – a class standing midway between the top and the bottom; most define it in absolute terms – as possessing a particular standard of living, as measured by income or wealth.

To define the middle class in relative terms, i.e., in relation to the rich and the poor, we start with the median consumption level. (If the population were arranged according to their level of consumption, from the highest to the lowest, the “median” would be the person in the middle, with an equal number of persons on either side.)

From the Government’s National Sample Surveys of consumption, one can locate the median consumption level. A World Bank study did just this to arrive at what it called India’s “middle class.” Its startling finding was, in the bank’s words, that, “India’s middle class lives barely or not far above India’s poverty line, and below international poverty lines, especially in the rural areas.” 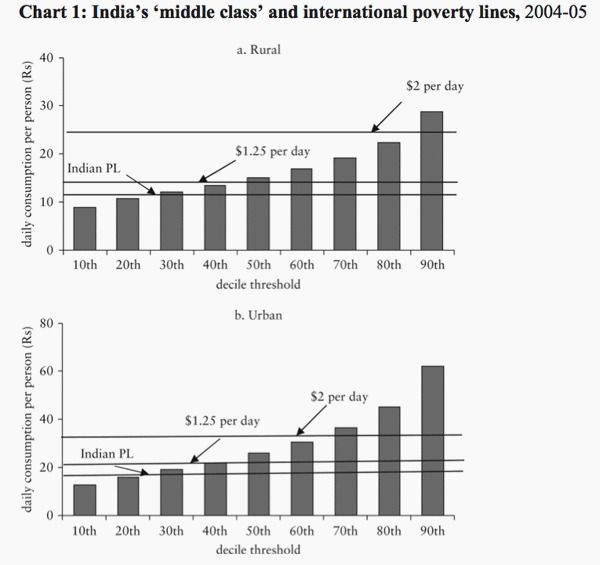 A large number of officially “non-poor” people in India are clustered just above the official poverty line, so that even a small increase in the poverty line adds large numbers to the figure of the poor.

Moreover, as the World Bank noted (pdf), not only did people move out of poverty during any given period, but others also moved back into it, for various reasons such as illness. A large section of those officially deemed “non-poor” belonged to the same social group as the officially poor.

Difficult to separate from the poor

The National Sample Survey, on which the World Bank calculations are based, collects data on household expenditure, but not on income. The 2005 Indian Human Development Survey (IHDS 2005, fielded by the University of Maryland and NCAER), on the other hand, gives us data on income as well.

Using the IHDS 2005, Reeve Vanneman and Amaresh Dubey defined middle-income households (pdf) in relative terms, as those whose income is above half and below twice the all-India median. Their data place the median per capita income for 2004 at Rs 5,708, or Rs 15.64 per day. This is lower than the lower of the World Bank’s two international poverty lines. Three-fourths of the population would fall under the higher of the two World Bank lines.

A more recognisable “middle class” would be the households identified as “affluent” with incomes more than twice the Indian median. These households… [are] hardly well-off by OECD [i.e., developed country] standards but comfortable in the Indian context. Most of these households are based on income from relatively secure, salaried positions, and most own or aspire to an array of consumer goods that make them targets for modern marketing.

The real condition of households at the middle of India’s income distribution is brought out by the “multidimensional poverty index”, which measures deprivation in various elementary needs (education, health, and living standards): 55.3% of Indians were deemed to be “MPI poor” in 2005. Another 18.2% were considered (pdf) to be “near multidimensional poverty.”

In brief, if we were to define India’s “middle class” in relative terms, it would be difficult to separate it from the poor.

This is precisely why the National Commission for Enterprises in the Unorganised Sector (NCEUS, also known as the Arjun Sengupta committee) devised the term “poor and vulnerable” for those with a per capita daily consumption of up to Rs 20 (in 2004-'05). The cut-off was placed at two times the official poverty line of the time (this was also close to the figure for the higher of the World Bank’s two international poverty lines). The poor are not a homogenous mass; there are gradations even among the ranks of the poor.

That is, the NCEUS’s “middle income” group was nowhere near the median; rather it was in the top quarter of the population. All the above is not to deny that there are degrees of poverty. Let us say we set aside the official poverty lines and acknowledge the glaring truth that the majority of the population are poor (if the word “poverty” is to have any meaning at all). Even so, the poor are not a homogenous mass; there are gradations even among the ranks of the poor. Basing itself on the official poverty line, the NCEUS had used the categories “Extremely Poor”, “Poor”, “Marginally Poor”, and “Vulnerable”; even if we decide to choose other terms, it would still be useful to measure different levels of poverty in order to understand its dynamics.

Just as, in the caste system, there is a hierarchy even among the vast majority of the “low-born,” the social and political role of the very poor and the somewhat poor may differ, and even collide in the absence of a political leadership that can unite them in their basic common interest.

A version of this post first appeared in Aspects of India’s Economy, published by the R.U.P.E.  This article was originally published on Qz.com.