Become a Member
Ad
In 2013, when I published The Wildings, a saga about cats, cheels and other animals set in Nizamuddin, many interviewers asked about influences.

“Richard Adams’ Watership Down, Kipling’s Jungle Book, Olga Perovskaya’s Kids and Cubs, The Three Fat Men by Yuri Olesha,” I’d say. And the interviews would come out dutifully mentioning Adams and Kipling, but blanking out the Russians.

It was not the fault of the interviewers. They had started reading in the 1990s and the 2000s, and they were completely unfamiliar with the Soviet authors. They hadn’t grown up singing the cosmonaut song from Victor Dragunsky’s The Adventures of Dennis: “On the dusty paths of the distant stars/Our footprints will remain.”

The big distinction between Soviet children’s books and Enid Blyton was simple: the former were more real, while Blyton fell into the realm of fantasy.

The world of the Five Find-Outers (and dog) or places like Sunnymead Farm were as exotic as Tolkien’s orcs and elves, and as remote to our experience. The muffins, scones and ginger beer could have been fairy food in that decade – dwarf bread was as foreign to our experience as the concept of a “scone” in a country where cakes were either Britannia’s sliced monstrosities or were flat, homely objects baked in a tin over a coal oven.

It sums up the lure of the Russian books for me – so everyday, like the trials and obstacles the children go through, but with just enough of the unfamiliar to spice the reading.

When I asked friends – many of them now writers and publishers – for their memories of Soviet books, it was like opening the floodgates.

If you lose a political and trading connection with a country, as India did with Russia, you also lose part of your personal memory. At the hundreds of literature festivals sprouting like dank mushrooms across the country, there are no panels on The Three Fat Men and their influence on our political nightmares, Bulgakov or Arkady Gaidar’s impact on our writing styles, no self-important papers on The Influence of the Soviet School on Indian Writers of X Generation. And yet, we remember it well.

Annie Zaidi – playwright, poet and novelist now – wrote to say: “One thing that distinguished the Russian books from other kiddie books I saw was that they were more real, more everyday. I had never seen a book where the illness and pain of a small child was at the heart of it, its raison d’etre. Silly stories about daddy’s childhood being an escape, and the father’s helplessness in the face of pain – this was very rare. It still is. Too many kids’ stories are about superheroic qualities or adventures, which is a sort of fantasy too. And now, even the fairytales are sanitised to remove all traces of real pain.”

Meenakshi Reddy Madhavan, now a novelist and celebrated blogger, remembered Galina Demykina’s The Lost Girl and the Scallywag, about a girl who discovers she can walk into a painting made by her grandfather. Salil Tripathi, human rights consultant and non-fiction author, was given a birthday gift at the age of ten – a set of Tolstoy’s complete stories translated into Gujarati.

The editor Sonal Shah’s grandfather brought back books from China – the illustrated children’s version of Journey to the West, books like Dreams of Red Mansions and Mao’s poetry. “There were also picture books for smaller kids that were basically the communist party propaganda version of the ‘Good Indian Boy’ charts,” she wrote.

Benjamin Zachariah, now a scholar and academic, remembered the man who used to sell Soviet books door to door. “I was in Presidency College, in my second year, when the Soviet Union came to an end.” Arunava Sinha, the translator and writer, recalled the bookshops quite clearly, and Indrajit Hazra, writer and journalist, directed the nostalgic to a Soviet books showroom near Hedua, close to College Street in Kolkata with caveats (“not for the fainthearted”).

Many remembered the science books – Physics Can Be Fun, the Yuri Gagarin autobiography – along with the more frightening books. Documentary filmmaker Bishakha Datta’s memories of the menacing shadows-and-spies world of The Three Fat Men were as strong as mine.

The editor Simar Puneet wrote about Albert Likhanov’s The Maze, with “bleak and beautiful illustrations by Yuri Ivanov – the first book that made me feel like a grown-up”.

And then Kavitha Krishnan, gender activist and politician, dug out a page from Kids and Cubs online, and wrote: “But the nice memories are a bit spoiled now learning from Wikipedia that the author spent a long time in a labour camp post-1943.”

I froze in mid-post and stared at the screen, images tumbling through my head – the line drawings of Olga Perovskaya and her sisters, “four little girls in red hats” – and thought of how badly I’d wanted to meet Perovskaya, to thank her for the magic of Kids and Cubs.

The Internet gave me meagre details. She had been arrested in March 1943, and sentenced to imprisonment during the Great Purge. The sentence had been commuted to exile at some point, and she had been released in the mid-1950s. Her books had not been published for ten years, though she was eventually rehabilitated.

I could not find out which camp Perovskaya had been sent to, but Anne Applebaum’s matter-of-fact descriptions of the Soviet gulags in the 1940s are fearsome. “The word ‘GULAG’ is an acronym for Glavnoe Upravlenie Lagerei, or Main Camp Administration, the institution which ran the Soviet camps. But over time, the word has also come to signify the system of Soviet slave labour itself, in all its forms and varieties: labour camps, punishment camps, criminal and political camps, women’s camps, children’s camps, transit camps,” she wrote in an introduction to The Gulag Museum.

I think often of Perovskaya’s years in the labour camps. She must have broken frozen ground along with the rest of the Russian families caught up in the jaws of the labour camp machinery, walked for hours every day to put in another nine or ten hours of work, survived the bedbugs, the small and distinct kicks, blows and other cruelties of the guards, slept on the bare planks in that freezing cold, eaten meagre soup from those battered tin plates. She died in 1961; she was fifty- nine years old. 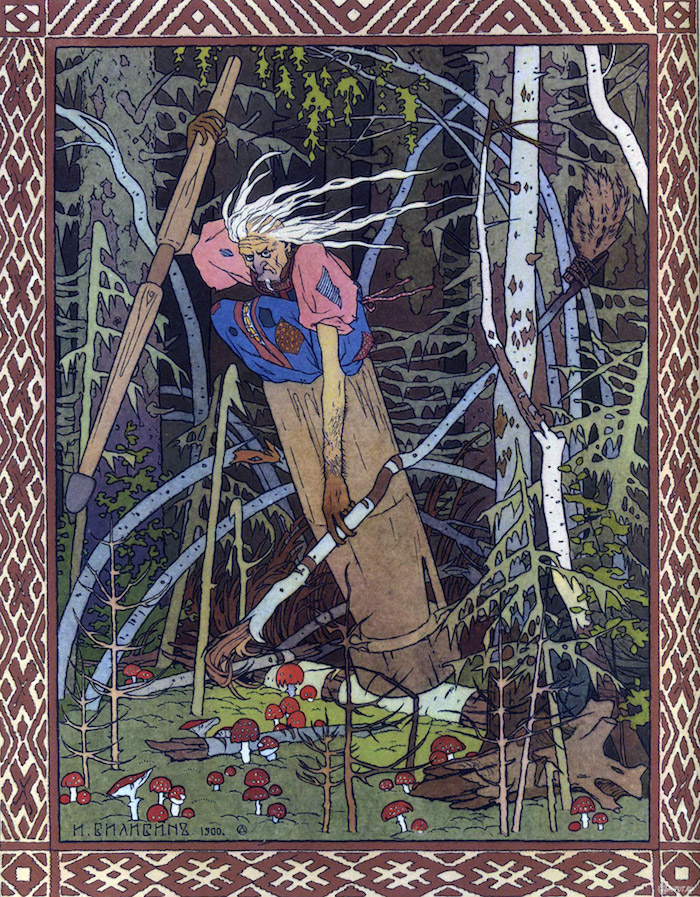 I lost my fear of the Baba Yaga gradually but surely.

It was replaced by something that I was too young to recognise as envy. The Yaga was wise, if curmudgeonly, but it seemed to me that anyone would be short of temper if uninvited princesses and Vasilisas insisted on dropping in without notice. She had her own property in the shape of a mobile hut; her own high-speed, very cool transport.

She was not afraid of displaying her wrath or behaving badly, or eating the odd annoying person, all qualities that I secretly envied because I was so often told that displaying your anger and having tantrums were not ladylike things to do. I did not want to be ladylike at all, but between the nuns at my convent school and a battalion of aunts, it was thrust upon me.

TheYaga fascinated me. She had wisdom, which is distinct from intelligence, and she drew her formidable power from sources other than youth, beauty or charm, which made her a quirky role model for a young girl.

She was not like the witches in some of the grimmer Russian fairy tales, which did not soften their violence. I read many of these, including one about a brother and sister pair, Sister Alyonushka and Brother Ivanushka.

The brother was changed into a little goat by black magic, and as for the sister: “One day the Merchant went away from home and all of a sudden a Witch appeared out of nowhere. She stood under Alyonushka’s window and begged her ever so sweetly to go and bathe in the river with her. Alyonushka followed theWitch to the river, and when they got there the Witch fell upon Alyonushka and, tying a stone round her neck, threw her into the water and herself took on her shape.” When she realises that the goat knows her secret – he sings to his drowned sister – she decides to kill him. The goat sings to Alyonushka:

Sister, dear Sister Alyonushka!
Swim out, swim out to me.
Fires are burning high,
Pots are boiling,
Knives are ringing,
And I am going to die.

She sings back to him:

Nilanjana Roy is an internationally acclaimed journalist, columnist and writer. Her books include The Wildings (2012), which won the Shakti Bhatt First Book Award in 2013, and The Hundred Names of Darkness (2013). She lives in New Delhi.

Shortened from the essay Baba Yoga In The Back Garden; excerpted with permission  from The Girl Who Ate Books: Adventures In Reading, Nilanjana Roy, HarperCollins India. To be published in January 2016.