This unique cutlet harks back to the Raj era when British officers living in dak bungalows would often ask the desi bawarchis to recreate the English food they were used to. One such dish was a cutlet covered with egg chiffonade, known as a covered cutlet or a coverage cutlet. In pronunciation, the word ‘coverage’ got distorted to ‘kabiraji’. Incidentally, in Bengali, the word kabiraj means doctor. 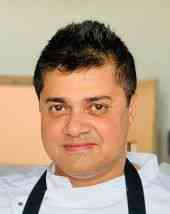 Chef Saby is the only recipient of the coveted National Tourism Award for Best Chef of India, awarded by the President of India. Chef Saby quit his high-flying job as the Culinary Director of Olive Bar and Kitchen in 2012 and started his culinary academy to nurture and mentor young chefs. His biggest international achievement came when was adjudged the Best Chef of India at Varli Awards, New York. He was also honoured with the prestigious Golden Hat Award by the Indian Culinary Forum. Currently, he is involved in shaping the culinary path of BYG Ventures Pvt Ltd Bengaluru in addition to his three restaurants – Lavaash by Saby in Delhi, Mineority by Saby in Pune and Poppins Hotal in Gurugram – and with his pan-India hospitality consulting firm Fabrica.