Ghose has been posting a series of tweets this month not only about Gujarat's BJP chief minister but, ironically, also about the increasing threat to independent journalism.

"There's a disturbing new trend in the Indian media of measuring objectivity and bias," she told Scroll.in, even though she declined to comment about whether she had received any instructions from the management. "Journalists who believe the politician is their natural adversary and systematically question all politicians are seen as biased, but those who attack only certain politicians and sing hosannas to another politician are seen as objective."

She said she was angry that Modi's supporters were making it increasingly difficult for journalists to criticise the Bhartiya Janata Party's prime ministerial candidate on the internet, particularly on Twitter. Moreover, the climate of intolerance towards Modi's critics is spreading beyond the internet, she said.

On February 1, in response to an interview with Narendra Modi's wife, Jashodaben, 62, a retired school teacher, that the Indian Express had published that morning, Ghose tweeted, "Poignant interview in IE of Jashodhaben, married to @narendramodi at 17. So many women married off at young age, time to restore their dignity."

Then on February 6, Ghose posted a series of tweets about the threat to independent journalists. 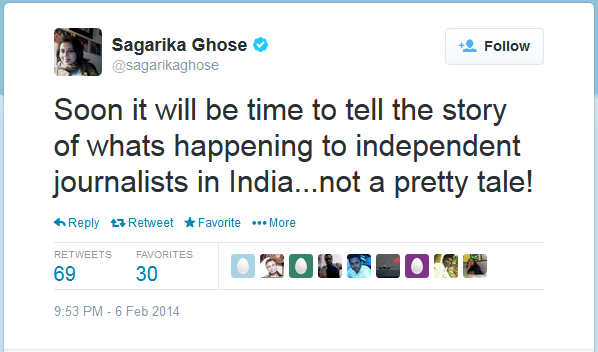 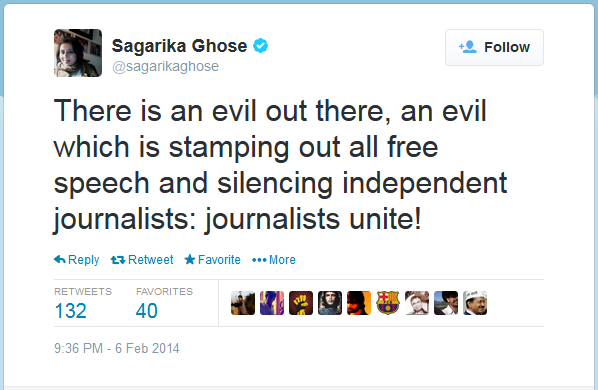 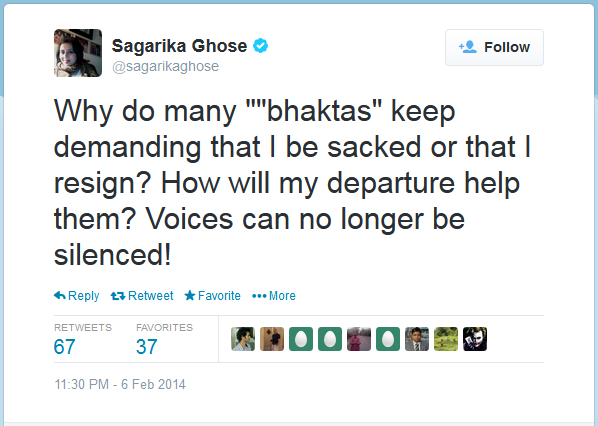 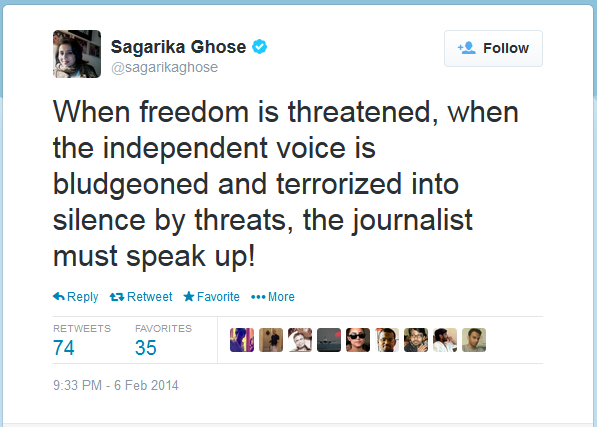 Sagarika Ghose is not the only senior journalist who might be in a spot of trouble for expressing her views. Nikhil Wagle, editor of IBN Lokmat, Network 18's Marathi channel, known on Twitter to be a critic of Modi , is also under pressure from the management, sources said.

He also posted a series of tweets on February 6: 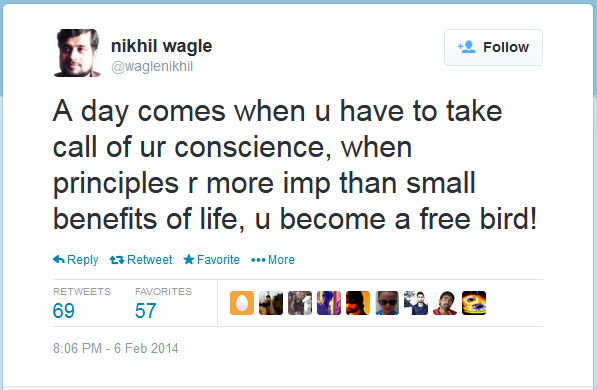 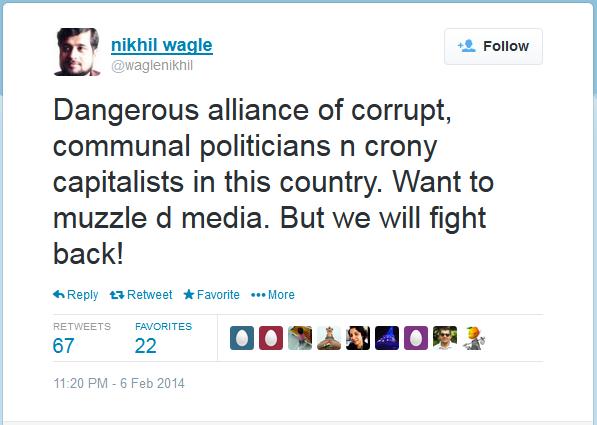 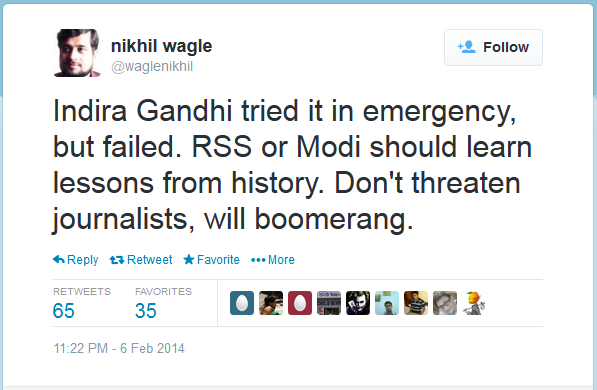 The Caravan, a highly reputable monthly magazine, published a detailed cover story in December on Network 18, in which it alleged that the organisation had taken a turn to the right.

Network 18 is not the only media company that is perceived to be placating Modi and his supporters, even before the general election has taken place. Siddharth Varadarajan, a highly respected, award-winning journalist, was negotiating with India Today magazine after resigning as editor of The Hindu in October. But the talks fell through because sources said that he had made it clear he wanted full editorial freedom, including the freedom to be critical of Modi when warranted. Varadarajan confirmed to Scroll.in that he had been in talks with India Today but declined to say what had transpired.

But on February 6, in response to Ghose's tweets, Varadarajan tweeted: 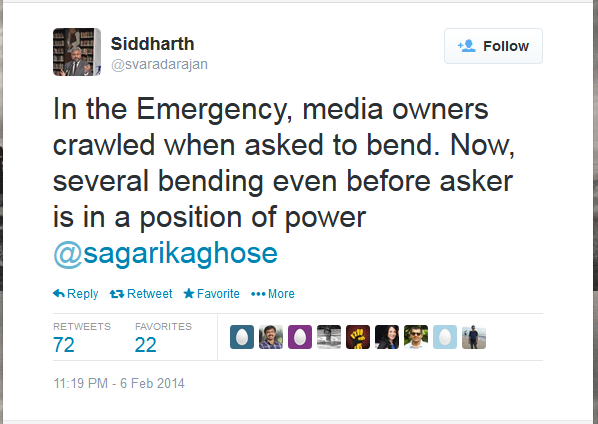 Further, Hartosh Singh Bal was fired as political editor of Open magazine in November without being offered a reason. But in an interview to The Hoot, a media criticism website, the weekly magazine's editor, Manu Joseph, indicated what the reason was.

Joseph revealed that the magazine's proprietor, Sanjiv Goenka, had told Joseph that he was "making a lot of...political enemies" because of Bal's writings and utterances on TV news channels. When the magazine's management decided to appoint PR Ramesh as the new political editor, Joseph also resigned, to be replaced by S Prasannarajan.

In an article, Bal wrote that Ramesh was considered close to BJP general secretary Arun Jaitley, who is regarded by some as the BJP's "bureau chief" because of his influence over the media. Ironically, one of the last stories commissioned by Bal before his exit was about the Modi campaign's increasing hold on the media.

Intolerance towards independent-minded journalists is not limited to the Delhi-centric national media. Thiru Veerapandian reportedly lost his prime time show on Sun TV for merely saying that people should think before voting for Narendra Modi.

In Gujarat, chief Minister Narendra Modi's regime has also gone after journalists, filing cases under a sedition law that the Supreme Court has ruled should be used only in cases of violent rebellion against the state. In 2006, Manoj Shinde, editor of a Gujarat paper, was charged with sedition for merely criticising the Modi government's tardy flood relief efforts. In 2008, The Times of India's Ahmedabad editor, Bharat Desai, and a photographer for the Gujarat Samachar newspaper were charged with sedition for exposing corruption in the police.

After Vidya Subrahmaniam, a senior journalist at The Hindu, wrote an op-ed about Sardar Patel in October 2013 that appeared to have irked Modi's supporters, she received so many threat calls and intimidating messages that she filed a police complaint.

After The Caravan magazine published its February cover story on Swami Aseemanand in which he accused the RSS of sanctioning terrorism, the magazine received threatening calls, its executive editor, Vinod Jose, tweeted.  "I cannot imagine any other media house in today's environment, where I could have published this story," Jose said.

Modi's supporters on the internet defend their attacks on journalists by saying that the liberal media has been biased against Modi and the BJP and charitable to the Congress. Even if this untenable accusation were true, blanking out criticism of the BJP and Modi is hardly the solution.

"I have been trenchantly critical of the Congress and the Gandhis, but no one has threatened me with death, gang-rape or sacking," said Sagarika Ghose, referring to the online abuse she receives daily.
We welcome your comments at letters@scroll.in.

Not just the Economist: Modi’s image in the global press has taken a beating in the last two months