Contribute Now
Ad
Narendra Modi, the Bharatiya Janata Party’s prime ministerial candidate, won't be participating in ‘Facebook Talks Live’ this evening. The word put out by the Modi camp is that it would be demeaning for a serious contender like him to participate in a series of events in which the other Prime Ministerial candidates are “upstarts” such as the Aam Aadmi Party's Arvind Kejriwal and Lalu Yadav, the Bihar politician convicted of corruption. It has also been suggested that the Modi campaign was unhappy with the participation of NDTV, which isn’t their favourite channel. The series of interactions is being organised by Facebook, conducted by the media website Newslaundry and broadcasted live by NDTV. Newslaundry sources say the Modi campaign placed conditions at the last minute that could not be agreed upon, which led to the cancellation.

However, the Modi campaign would have known a month in advance that NDTV is the broadcast partner, and that other participants include Arvind Kejriwal, Lalu Yadav, Akhilesh Yadav of the Samajwadi Party, and West Bengal chief minister Mamata Banerjee. So what changed at the last minute?

The answer perhaps lies in the format of the show, which had three sets of questions. The first set was from Facebook users, for which Facebook invited questions on its Facebook India page. The second set was to be from an audience invited by Newslaundry. The third was to be from Newslaundry editor Madhu Trehan. Since the first set of questions can be publicly seen on the Facebook India page, they may have given some indication to the Modi campaign that the show may not result in a PR victory for them. 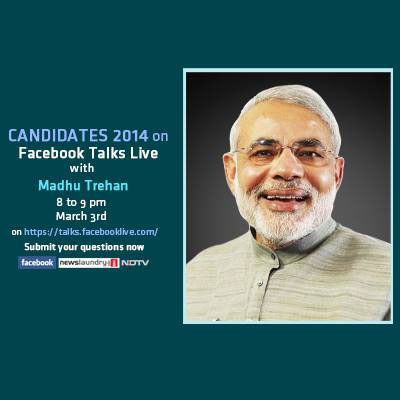 In the hundreds of questions asked in the Facebook India page, five themes stand out strongly. First, the BJP's silence on the issue of gas pricing that the Aam Aadmi Party has been raising. Second, the more general issue of corruption. Third, the BJP's support for the creation of Telangana even though Modi said that the Congress was dividing Andhra Pradesh. Many, and not just Muslims, wanted to know about religious freedom, the 2002 violence in Gujarat and the rights of religious minorities if Modi was to become Prime Minister. Last, there are a surprisingly high number of questions about caste-based reservations.

A perusal of the profile pages of those asking such questions makes it clear the backgrounds they come from: Seemandhra residents who did not want Telangana created; supporters of the Aam Aadmi Party; and Muslims. But some tough policy questions also seem to come from people whose Facebook cover images are in support of the BJP or Modi.

Perhaps Rahul Gandhi, vice president of the Congress party, was wise to not accept the invitation in the first place. He prefers to interact with groups of pre-selected and carefully screened people across the country. The idea is to show Gandhi interacting with the common man but it is so obviously orchestrated that it defeats the purpose.

After Gandhi's interview to Arnab Goswami, the tough questioner at Times Now, the Congress campaign cancelled a number of other interviews scheduled for the Gandhi scion. It is yet to be seen whether Modi is going to subject himself to Goswami or to a similarly unsparing interviewer before polling begins.

Other ambitious politicians, such as J Jayalalithaa of Tamil Nadu and Kumari Mayawati of Uttar Pradesh, are never seen taking questions directly from the public. The tough questions for Modi are a sign of the changing times: you may choose to evade the questions but they will be asked.

Here are some samples of questions that Facebook users wanted to ask Narendra Modi:

From Vibhor Mathur:
“India is afraid of the fact that as soon as BJP comes to power, BJP and its associates like RSS, Bajrang Dal, Hindu Mahasabha, VHP would start doing Moral Policing?”

From Priyanka Arora:
“Why have you not spoke anything on the matter of gas price hike while Mr. Arvind kejriwal is continously poking you to answer?? We need to hear ur views about such sensitive issues Mr. MODI.... Plz wake up...coz v dn't want to vote u for sitting quietly on PM's chair without answering to the problems of a common man!!”

From Azad Singh:
“What u have decided for reservation Cast or poverty? Bcz Cast is affecting many people who are poor staying in General category, they can not take benefit Since Cast base reservation is not giving benefits to all but Poverty base reservation can uniform the system. Why u don't want to speak abt this???”

From Aaron Vasanth:
“Why did Mr. Narendra Modi leave the interview an year or two ago, when the interviewer Karan Thapar asked him questions on the Gujarat Riot??”

From Lilly Shahi:
“What is the answer of u about passing T BILL in loksabha aganist the constitution rules ... both BJP and UPA has joined hands and supported telangana...by this one state looses and another benifts . .. and ur using a word on many stages that "congress is dividing AP and all the AP people are suffering from it"... ur party joining hands with congress only the bill has passes..whats the answer for this ..ur BJP is also responsible for it ... BUT UR AIM IS MAKING INDIA NO.1... BUT BECAUSE OF UR PARTY DECISION ALREADY ONE STATE BECAME NO.0...”

From Manik Tyagi:
“My next question is regarding empowerment of state governments, currently the state share of central revenues is just 30%, I believe to really empower states we need to increase this number to probably 60%. Do you support this.”

From Vidit Shah:
“Narendra Modi sir, what are your views on black money outside india? How you will recover all this money? and How much time taking process will it be?”

From Adil Rashid:
“My ques is, modi's fan used to talk about gau hatya, ram mandir, terrorism, corruptn etc but why is he nt givn statement on these thing.....wl he put all these thing in his menifesto??”

From Jasmeet Kaur:
“Mr Modi if you become PM, will you make all donations to political parties transparent. and please tell your stand on upcoming gas price hike by mukesh Ambani group..”

From Ashish Patel:
“According to ADR 30% of BJP sitting MPs have some criminal cases. Can you promise not to give ticket to such kind of corrupt people in upcoming Lock Sabha Election?”

From Sidharth Shankar:
“My question to him is, as we all know muslim community do not like him and his and his party's ideology is religion based because of influence of RSS and VHP. So how do you plan to gain the support of muslim community? And will they feel safe in your government as you endorse idea of Hindu nationalism and Hindu nation? And please clearify your stand on the idea of a Hindu nation.”

From Raghu Venkatachalaiah:
“Mr. Modiji, Why are corrupt and tainted candidates assured ticket for contest in Karnataka, and why is the top brass in the state unit reluctant to give tickets to the young, clean aspirants in the state? Why is BJP shy of new faces?”

From Nikhil Dudhawat:
“Why is BJP still ignoring Arvind Kejriwal and #AAP, even after experiencing wht happened in Delhi? Isnt tht a sign of complacency or Over Confidence. Why does BJP's Top leadership has stayed away frm Controversial Conservative issues like #377 nd Doninger's book. Would BJP Roll back freebies given by present government to bring back the economy back on track.”