Contribute Subscribe
Ad
Bollywood actor Rakhi Sawant is campaigning. On her first day out to rally the vote for her Rashtriya Aam Party in Goregaon in north-west Mumbai, she paid no attention to the swarm of photographers around her, but spoke directly to people.

Her message is clear: only a woman can understand a woman’s problems, which is why people should vote for her. “I will not cheat you like the others have," she declared. "Just give me one chance to prove myself to you.” The crowd parted way for her, but only smiled uncertainly when she looked them in the eye, pointed right at them, and then back at herself to indicate that she wanted their vote. 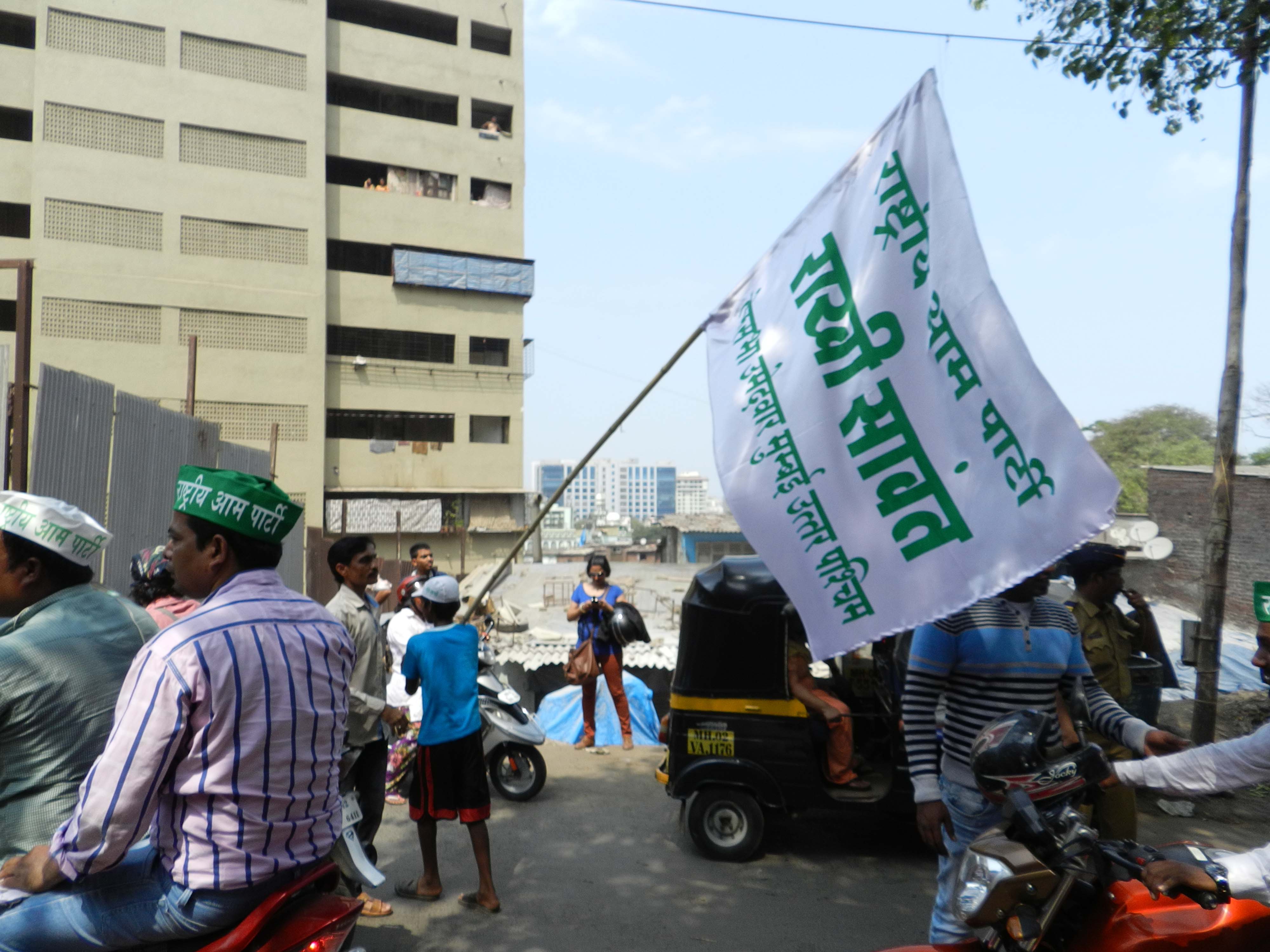 A boy strays far ahead of the rally with the main campaign flag.

Bystanders seemed confused about Sawant. “What is this green chilli?” one asked. “Is she from the Aam Aadmi Party?” Others speculated about which of the men accompanying her was her husband.

“Arre, don’t you know?” said a man trailing Sawant. “She only had a swayamvar, she never got married.” It was a reference to the reality television show Rakhi Ka Swayamvar, where she was supposed to choose a husband from an array of contestants.

Sawant, vice president of RAP, is better known for her appearances on television reality shows and in low-budget Hindi films. She announced her intention to contest elections on March 28 and decided to start a new party. She is the party’s only Lok Sabha candidate. Running against her are Gurudas Kamat (Congress), Mahesh Manjrekar (Maharashtra Navnirman Sena), Gajanan Kirtikar (Shiv Sena), Mayank Gandhi (Aam Aadmi Party) and Kamaal R Khan (formerly Samajwadi Party, now an independent).

Her party members are a motley mix of restaurateurs and hoteliers from the locality. One RAP worker, Munna Ansari, said that he decided to pitch his lot with Sawant after his employer at Heera Panna became one of the party’s funders. “If she does not win, I don’t lose anything,” he said. “But if she does…”

The party office itself is a one-room shack which serves more as a storage space for banners than as a gathering point for its scanty supporters. As soon as the rally was over, workers shuttered the room, and dispersed. 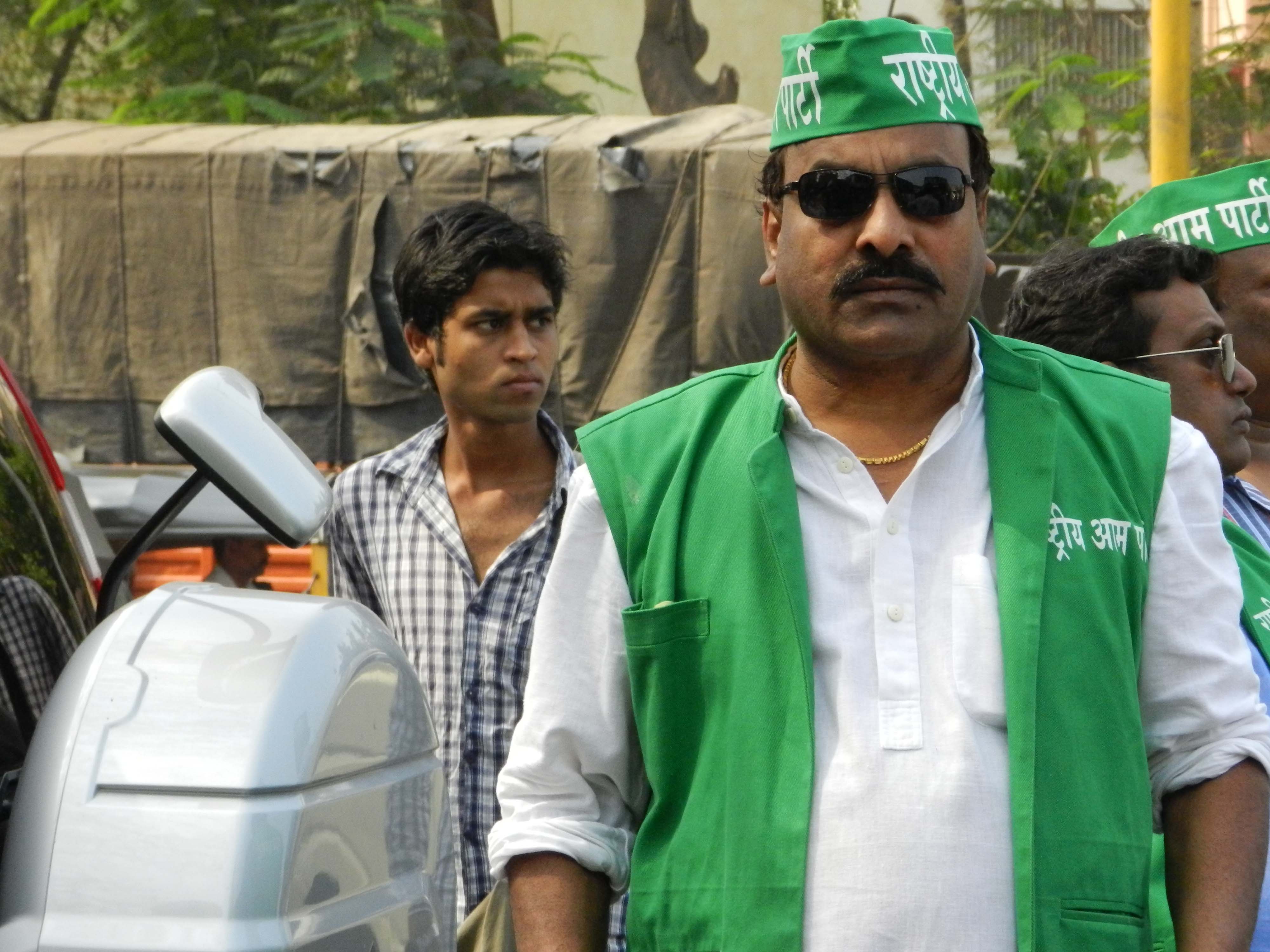 Barely an hour before the rally began, party president Deepak Tiwari was exclaiming on the phone about how a truck of women they had hired had not yet arrived. The Election Commission, he said, had allotted only two hours for their campaign. When they did arrive, these women from Jogeshwari were indifferent to Sawant’s campaign, preferring to walk a few steps ahead of the others, and only occasionally joining in the slogan chanting. They did, however, spend several minutes speculating on whether the only female party member apart from Sawant herself was her mother. (She was not.)

Agnes Menezes from Goregaon, also wearing a RAP Nehru topi, disagreed with her companions. “I am going to vote for her," she said. "There is nobody else who promises to work for women, and what she says is right. Why would men work for us?”

Rehana Ashraf, another worker, countered that. “If she is working for women, then why are all her party people men?” 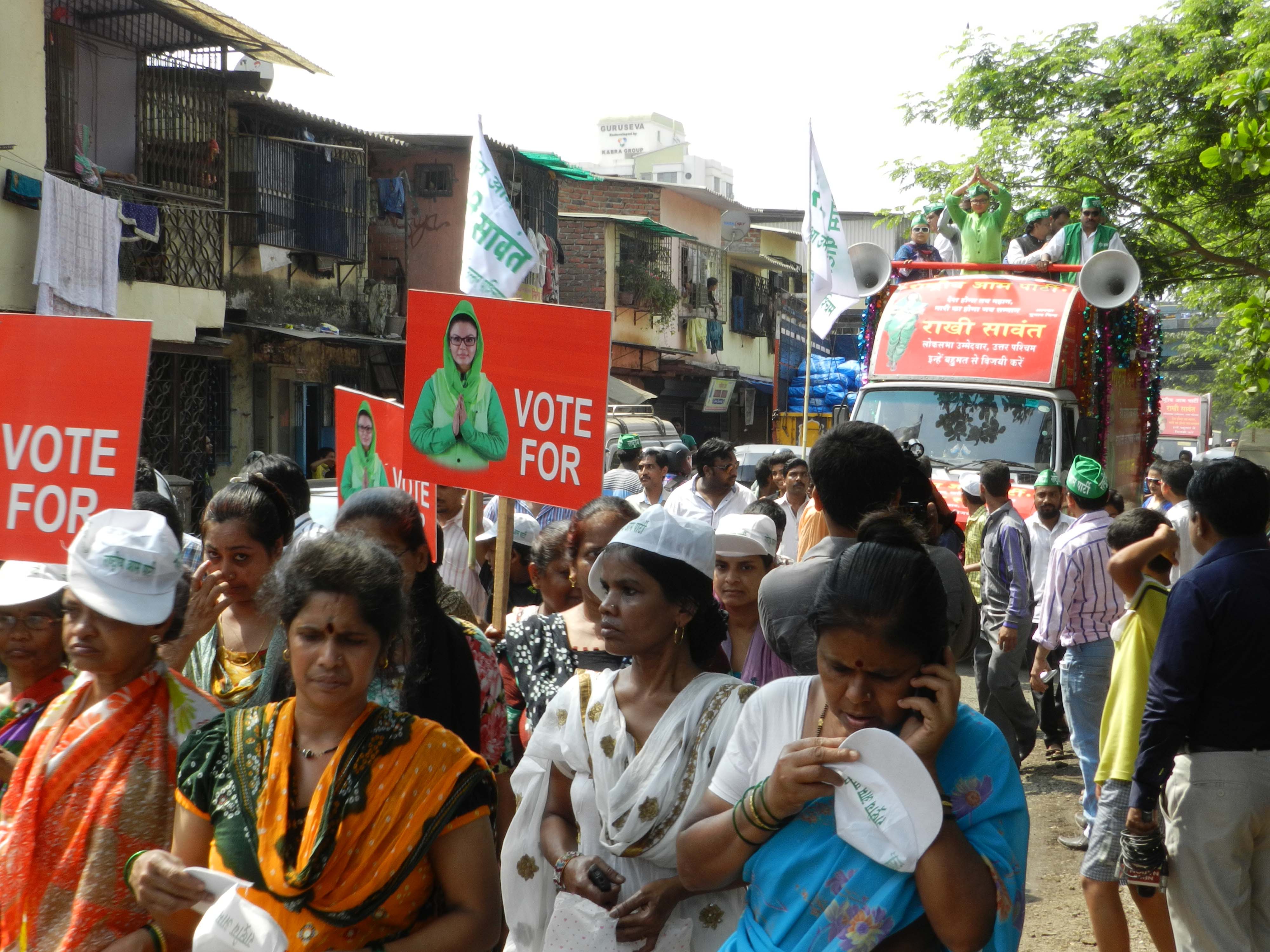 Another group of commandeered workers included Rafique Ali and a group of friends, who work at a nearby restaurant. Their manager gave them RAP caps and marching orders, but when they sat in the party truck, they were kicked out to make room for others. The trucks moved too fast for them to keep up, so they dawdled behind the procession, and eventually settled at a bus stop to catch their breath.

“We are all from Lucknow, so we don’t really know what is happening here,” said Ali “Whether or not she wins, that is not our problem. People like this come and go.”

Sawant and her supporters did not come and go immediately. They walked the first few hundred metres from their office to a parallel road, where their convoy of five trucks was parked. Photographers led the pace, scrambling to stay ahead of her as she strode through the narrow galli. She stopped every few minutes to speak to people about mostly vague promises to work for the upliftment of women. 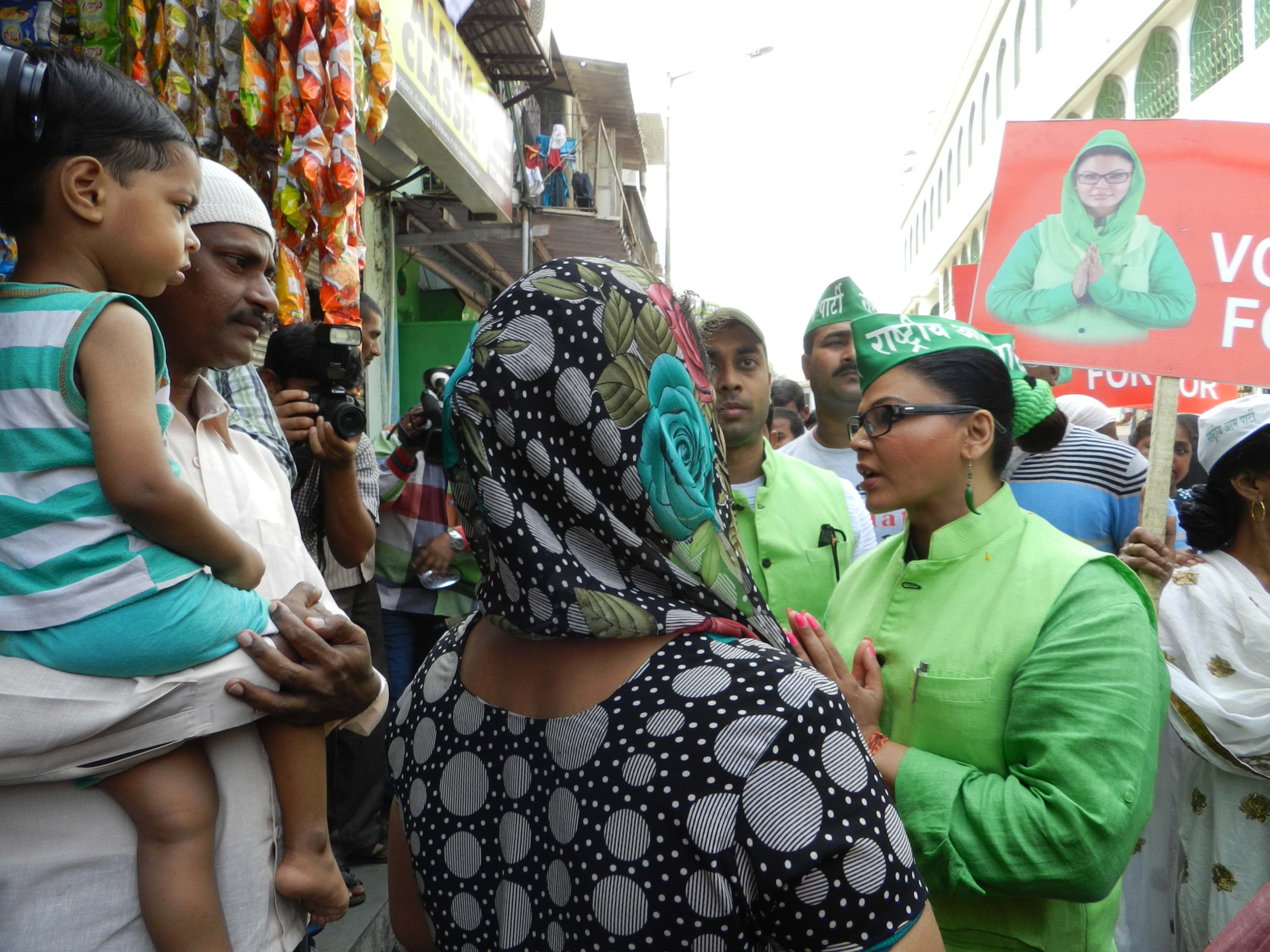 In keeping with the impression that this was more a piece of performance art than a political campaign, standard slogans were mixed in with some unusual promises: “Rakhi Sawant aapki betiyon ka kanyadaan karegi.” Rakhi Sawant will give your daughters away in marriage. “Aapka khandaan kaisa ho? Rakhi Sawant jaisa ho!” How should your household be? Like Rakhi Sawant.

By the end of the rally, a hoarse RAP worker at the megaphone was reduced to saying “24 April, 24 April. Hari mirch, hari mirch.” (Green chilli, green chilli.)

Asked by a Goregaon resident about why they should trust her to keep her promise, Sawant had one answer. “I am not like them. I will work for you. Just give me your vote.”