May 08, 2014 · 07:09 am
Aarefa Johari
Sapna Awale was 16 when she was married off to a farm labourer in Holgaon, a dusty village in Madhya Pradesh’s Barwani district. Her husband was 17.

Like most underage brides in the region, Sapna had very little knowledge about sex and none at all about family planning. By 17, she was already a mother, nursing an infant daughter while managing all the housework, caring for her in-laws and working as a farm labourer.

Then in 2012, Sapna had a visit from the local ASHA – an accredited social health activist appointed by the Indian government’s ministry of health and family welfare to serve as a community health worker in the village. “She spoke to all of us – my husband, my family and me – and explained to us why it would be better for my health if I delayed a second child,” said Sapna, who is now 19.

A few counselling sessions later, Sapna and her husband were convinced. She travelled 12 km by bus to the nearest community health centre to have a copper-T inserted in her uterus. “We will wait for at least three years before having another baby,” she said.

ASHAs, who are always women, have been around in many Indian villages since 2005, but they don’t typically counsel young couples about contraception. Working as freelancers under the government’s National Rural Health Mission, their duties involve providing first aid, bringing children to immunisation clinics, promoting sanitation and, by way of family planning, encouraging sterilisation for those who have had several children.

Since 2011, however, the ASHAs of Barwani have been going beyond the call of their duty as part of a special programme, run by the non-profit Family Planning Association of India, to address youth fertility in the district.

The project, focusing solely on education and counselling, has seen tremendous success in just two years: from 2011 to 2013, the use of contraception among young couples in Barwani shot up from 2% to 24%. FPAI aims to hit 30% by 2015. 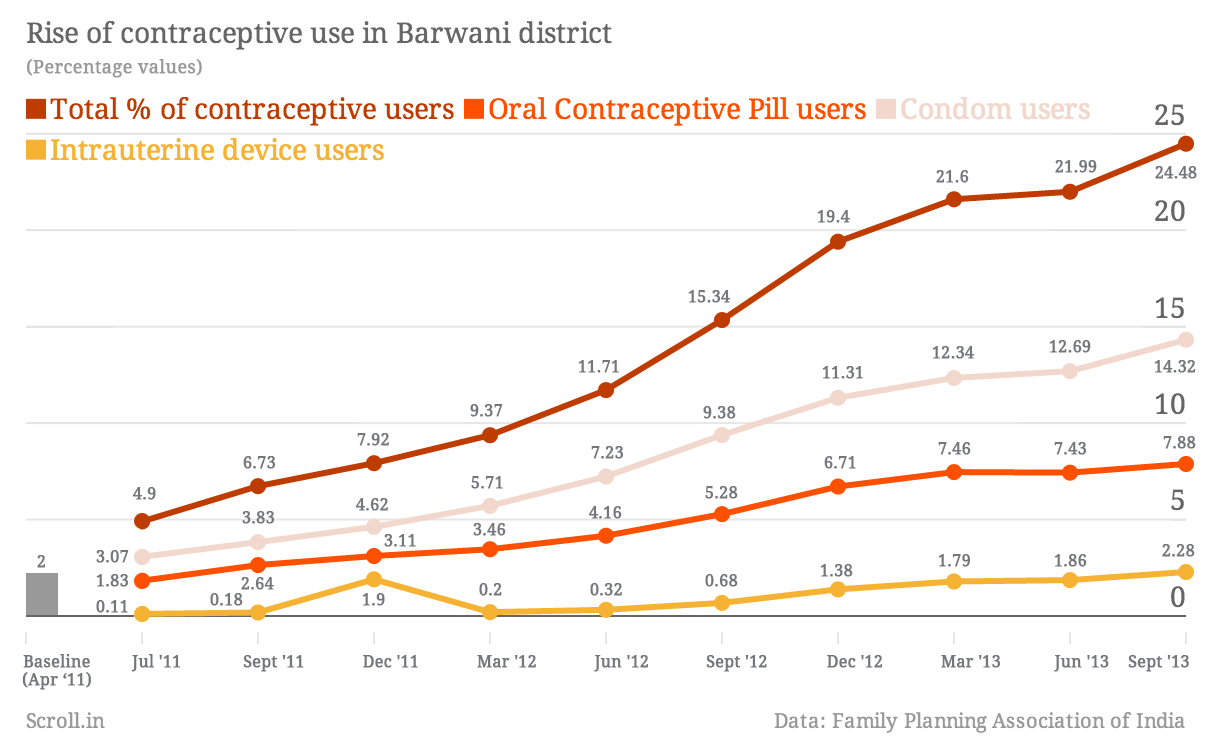 Socio-culturally, Barwani is not very different from most of rural India, with conservative residents who marry early and and are encouraged to have several children. But the FPAI chose to work in Barwani because it was set apart by startling social indicators.

Barwani has a population of 1.3 million, of which 70% belong to tribal communities like the Bhils, Oraons and Korkus. It has a population growth rate of 27.6%, much higher than the national average (17.6%) or Madhya Pradesh’s average (20.3%). Its literacy rate (50%) is among the lowest in the state, and 85.5% of the girls in the district are married between the ages of 14 and 17.

In fact, the average age for a Barwani bride’s first pregnancy is 16 years, and by the time they are 24, more than 60% of women in the district have had two or more children. Family planning is rare, and the average age gap between children is not even two years.

Because of its rugged, hilly topography, many villages in Barwani are unconnected by pukka roads and, as a result, are often neglected by block-level health workers and nurses. A few years ago, the district saw a rise in the deaths of young, frail mothers during pregnancy and childbirth. 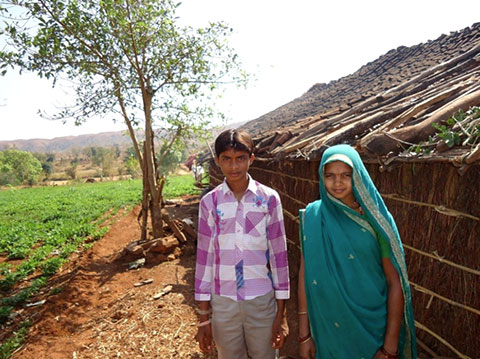 A young couple in Barwani.

The United Nations Population Fund, which commissioned and is funding the youth fertility programme, wanted the FPAI to bring down the number of childbirths in Barwani, increase the average age at which adolescent married women have their first child and promote healthy spacing between children.

The only way to achieve these goals in the long run, FPAI realised, would be to train native health workers, who are familiar with the local dialects, to counsel every young couple in every village in the district. “The aim was not to just hand out contraceptives, but to strengthen existing government healthcare systems, because that would be more sustainable,” said Nisha Jagdish, director of the FPAI’s HIV programme and in-charge of the Barwani project.

In April 2011, a team of 42 local social workers working for the FPAI enlisted 950 ASHAs from villages across Barwani, training them in groups.

“We had to first educate the ASHAs themselves about the dangers of early pregnancy,” said Lakhan Makwana, the project-coordinator in Barwani. At the end of the training, armed with brochures of information about contraception and family planning, the women went door-to-door in their villages, targeting families with young couples, newly-weds and even unmarried adolescents.

“It wasn’t easy, because tribals have their own cultures that they don’t want to change,” said Makwana. Newly-weds face a lot of pressure from their elders to give birth to children. “Because of their poverty, villagers believe more children would mean more breadwinners for the family.”

To create a buzz around the “delay pregnancy” campaign, FPAI roped in the district collector, health department officials, village panchayats, school teachers and anganwadi workers. In every village, ASHAs held four counselling sessions a month – one each for married boys, married girls, newly-weds and unmarried teens.

“Young couples are easier to convince because they don’t really want early pregnancies,” said Setul Solanki, an ASHA in Barwani’s Ganeshpura village. It’s their families that are harder to tackle, and Solanki usually gets her point across to them with the example of an unbaked earthen pot. “If you fill a kachcha matka with too much water, it will break. Similarly, having children early can make your young beti weak – that’s what I tell them,” said Solanki.

By September 2013, a little over two years into the programme, FPAI had reached out to nearly 22,000 couples and 91,000 unmarried youth, and the use of contraceptives in Barwani had increased to 24%. Condoms, easily accessible at health centres, were the most popular form of contraception.

“We have definitely seen an attitudinal shift in these two years – couples are opening up to health workers more than before and seeking help more often,” said Jagdish. Neighbouring districts are already keen to replicate the FPAI’s model.

Is RSS planning to take leadership of the Ayodhya movement from VHP?