Become a Member
Ad
Within days of being elected to parliament, new MPs of the Bharatiya Janata Party have announced a campaign to drive illegal Bangladeshi migrants out of Assam.

“The campaign will be initiated by the youth wing of the party within next 15 days," Kamakhya Prasad Tasa of the Jorhat constituency announced on Sunday. "In the first phase of the campaign, we will appeal to illegal immigrants to leave our land voluntarily in next 15 days. We will also launch a house-to-house campaign urging people not to engage the immigrants in any kind of work.”

Their argument that India is being swamped by illegal Bangladeshi immigrants is based on the following premises.

Two, that the growth of the Muslim population in these areas has been much higher than the growth of people professing other faiths, especially Hinduism.

However, the data shows that the growth among Muslims in Assam is not dramatically higher than the rate at which the community is growing in other states. 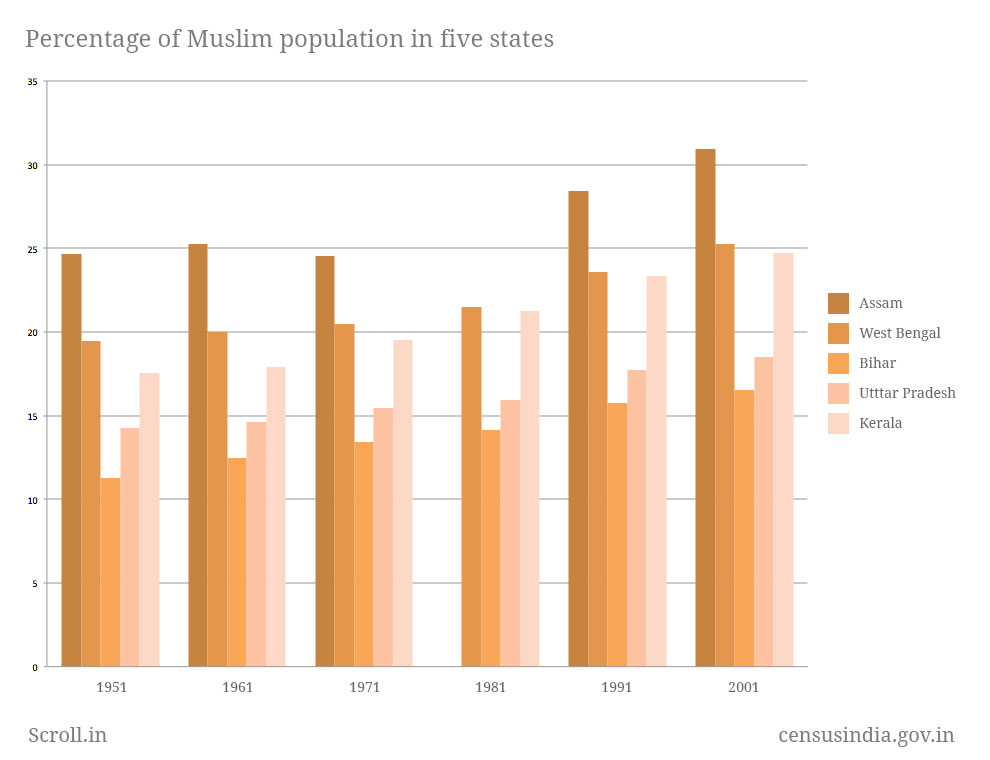 While it is true that the Muslim community is growing faster than the Hindu community, the growth rate of Scheduled Castes (Dalits) and the Scheduled Tribes (adivasis) is higher than that of Muslims. One explanation of the higher growth rate among Muslims, SCs and STs is the common thread of poverty and illiteracy that binds them.

However, it is interesting to note that Assam's population growth rate has declined since 1971 and has remained lower than that of India, refuting the assumption of continuing large-scale illegal immigration from Bangladesh.

A 4,095 km porous border with Bangladesh, with rivers and a difficult terrain, has been difficult to monitor. This means there has most likely been a steady influx of migrants from Bangladesh to escape poverty. But there is nothing to indicate that this migration is so high that it threatens to alter the region's demography. 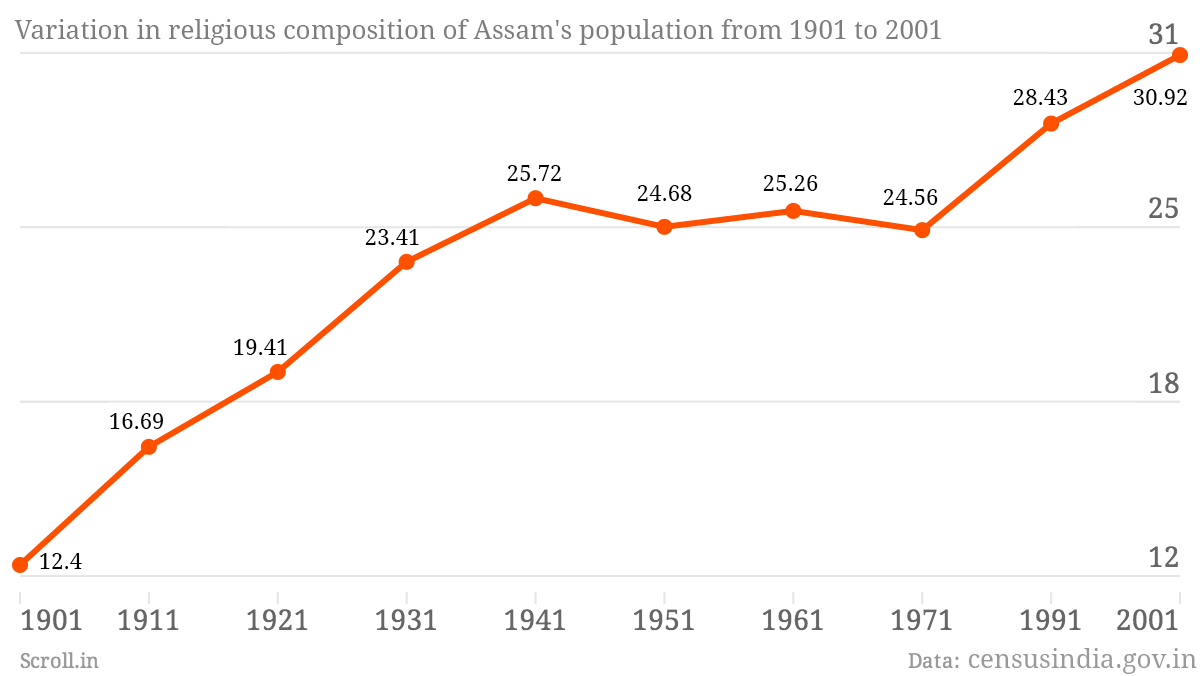 The graph above using census data shows two things. One, that the population of Muslims in Assam doubled from 1901 to 1941, thanks to the British policy of settling Bengali Muslim labour in Assam. The percentage fell a bit after Partition. The next big increase came after 1971, because India accepted many Bangladesh liberation war refugees. The 2.5 percentage point increase from 1991 to 2001 is in keeping with the Muslim growth rate across India.

Another test of the Bangladeshi "demographic invasion" is that the border districts should see an abnormally high increase in the Muslim population, but the census data shows that the percentage increase in Muslim numbers has been only marginally higher in border districts – which may be partly due to migration from across the border but is mostly because of natural increases.

The rag picker displaced by floods is not an illegal Bangladeshi

Who is that rag picker or rickshaw puller in the city? He is probably someone from Assam’s many "chars" (mid-channel river bars) trying to escape poverty, displaced from his settlement through man-made or natural calamity. As earlier described, the history of Muslims from Bengal migrating to Assam goes back to 1826.

Settled predominantly with Muslims of Maimansingyia descent in colonial times, the char dwellers form 9.4% of the state’s population by some estimates. According to a socio-economic survey report, between 1992 and 2003, the number of char villages in the Brahmaputra increased by 7.8%. The population growth rate in the same villages in the decade from 1991, on the other, was 55.6% compared to 18.9% for Assam.

The chars are densely populated (with 690 persons per sq km), more than double the state average of 340 persons per sq km. They have very little cultivable land but have one of the largest concentrations of illiterate people in Assam. In the decade from 1992-'93, their literacy level rose only marginally, from 15.5% to 19.3%. During the same period, the number of char dwellers living below the official poverty line increased substantially from 48.9% to 67.9%, even as the poverty level in the declined to 36.1%.

According to a survey, about 1,053 sq km of river bank has been eroded in the last 18 years, and more than half of it lies in lower Assam, which is densely populated by Bengali-speaking Muslims. More than two million Muslims have been displaced by erosion of the chars and river banks, leading them to migrate to cities within Assam as well beyond to the national metros.

The people who are accused of being illegal immigrants from Bangladesh often turn out to be Indian citizens with identification papers. But the groundswell of unverified prejudices often ends up turning every Bengali-speaking Muslim into a Bangladeshi immigrant. So pervasive is the myth of large-scale illegal Bangladeshi immigration that even the judiciary seems to believe it.

In 2001, upon hearing a public interest litigation filed by OP Saxena representing the All India Lawyers Forum for Civil Liberties, the Supreme Court said that "Bangladeshi migrants were eating into the economy of the country and had to a large extent become a security threat". The bench criticised the Union government for being indifferent to the issue and recommended that it take exemplary steps to tackle the alleged problem.

On July 12, 2005, a three-judge bench of the Supreme Court ruled that the Illegal Migrants (Determination by Tribunal) Act, 1983, applicable only to the state of Assam "created the biggest hurdle and is the main impediment or barrier in the identification and deportation of illegal migrants". The bench noted that despite inquiries initiated in 310,759 cases under the IMDT Act, only 10,015 persons were declared illegal migrants. Of these, only 1,481 had been physically expelled as of April 30, 2000. Then, in 2008, the Guwahati High Court chastised the Congress government because “these illegal immigrants have come to alter the demographic profile of the state impacting its culture, language and script, seemingly turning now to be the 'kingmakers' exploiting our flawed system”.

The debate would proceed on firmer ground if it was backed by evidence.

There are 100,000 ‘irregular’ Indian immigrants in the UK – but repatriating them home isn’t easy