Become a Member
Ad
On May 9, a memorandum circulated by the Mizoram government declared its northernmost district of Kolasib the state’s first "oil palm district". While government officials say that this was only for promotional and not administrative purposes, Kolasib remains Mizoram’s first district to host an oil palm processing mill, set up by Godrej Agrovet.

While the Mizoram government has been aggressively promoting oil palm cultivation since 2005 under its New Land Use Policy, environmentalists are concerned that this might be a mistake on three counts: water usage, food production and wildlife diversity.

Oil palm plantations are intended to replace the traditional practice of jhum, or slash-and-burn shifting cultivation. In this system, farmers cut down certain areas of the forest allotted to them by their village councils, burn the undergrowth, and then plant crops such as rice and seasonal vegetables. The next year, they repeat the cycle in another part of the forest, and return to the first place only seven or eight years later, when it has time to regain its original biodiversity.

However, due to decreasing forest cover, farmers practicing jhum are now returning to plots before the forest can replenish entirely itself. The government says that oil palm could be one way to replace jhum farming.

“Farmers have been practicing jhumming since the time of our forefathers, so it is difficult to stop overnight,” said RK Nithanga, deputy director (oil palm) at the Mizoram department of agriculture. “The real reason people are criticising palm oil is because they don’t want forests to be cut. But here in Mizoram at least, oil palms are better than jhumming because this is a permanent cultivation, instead of always destroying new parts of forest."

But this is not true, says a report on the impact of jhumming on biodiversity by TR Shankar Raman, a scientist with the Nature Conservation Foundation, and Jaydev Mandal, a research scholar with Gauhati University. The report is still being prepared for publication.

“We studied equivalent areas of oil palm plantations and jhum landscapes and found only a fifth of forest bird species in the oil palm area that we found in the jhum area,” said Raman. “Of course, jhum areas do not have all species, and it is important to preserve mature forests, but it does not make any scientific sense to replace it with a system that is worse for biodiversity.”

According to Raman, oil palm plantations actually lead to a greater loss of forest cover because once converted into cultivated land, the forest never has a chance to grow there again. 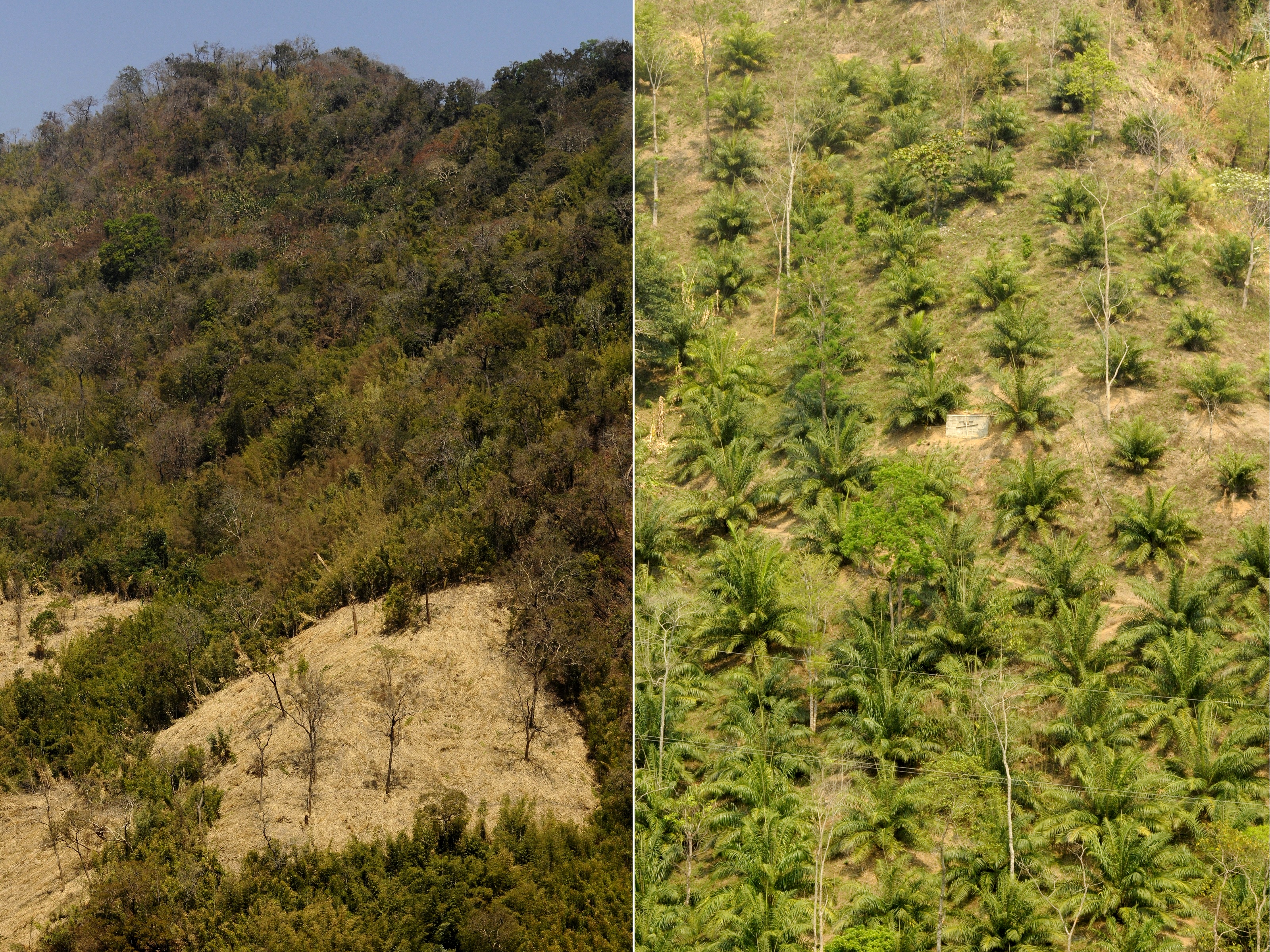 The regenerating fallows and forests in a jhum landscape (left) are better for forest cover and for biodiversity than oil palm monocultures (right), says Raman. Photo by TR Shankar Raman.

Even so, the Mizoram government’s flagship New Land Use Policy scheme is well under way. The government has assigned six of Mizoram’s eight districts to three companies: Godrej Agrovet Limited, Ruchi Soya Industrial Limited, and Food, Fats and Fertilisers Limited. The government buys oil palm seedlings from these companies and distributes them to aspiring oil palm farmers. The companies work with cultivators to give them technical inputs and advice, after which they buy all their fruit. After processing the palm, the companies are then supposed to sell the oil produced to domestic markets.

In its effort to ensure that farmers do not suffer losses by shifting to single-crop cultivation, the Mizoram government has signed memorandums of understanding with these companies to set up palm oil processing units with subsidies in exchange for promising to buy all the produce grown by farmers for a price fixed by the government.

Although the first oil palm factory, by Godrej Agrovet in Kolasib, will achieve full production only in the middle of June (an official from the company said they are waiting only for the chief minister’s approval), to comply with their agreement with the government, the company has already been buying oil palm fruits from the farmers since their first crop.

The arrangement is slightly unusual. Farmers are required to sell only to those companies that have been assigned to their district, and to no one else, making their farms corporate plantations in effect.

Another cause for concern is the survival of these plants. Oil palms are immensely water-intensive and require irrigation through the year. Mizoram, however, does not have a year-round supply of water.

Even Nithanga of the Mizoram department of agriculture admitted that this could be a problem. “As far as consumption of water is concerned, we don’t have good water source except monsoon rain,” he said. “But as long as there is good monsoon, we won’t have much problem. We are trying to promote rainwater harvesting.”

By replacing jhum, Mizoram might also be undermining its food production capacity as farmers switch from staples to cash crops. Nithanga said that they were attempting to promote crops according to their suitability to weather, and that they had reserved river valleys for growing rice, another water intensive crop. However, this might not be happening on the ground.

“In Saithah village in Mamit district [assigned to Godrej], where there used to be wet rice cultivation in the valley, I saw they were growing oil palms,” said Raman. “At least those areas should be kept aside for food.”

“Jhum gives the people food,” added Nimesh Ved, an ecologist with the Samrakshan Trust who has been studying conditions in the Garo hills in Meghalaya and recently visited Mizoram. “When they put in these plantations, whether rubber or oil palm or others, it is a threat to food security. They have been told not to do mixed cropping with oil palms. This could be a problem in two or three years.”