Contribute Now
Ad
Verdict 2014 is indeed a historic one. In the era of fragile coalition politics, the National Democratic Alliance has stormed back into power with their principal party, the Bharatiya Janata Party, winning more than half of the Lok Sabha seats. But it did so with the smallest vote share that ever produced a single majority of seats in India – 31%. The last four governments that were elected on a single party majority – in 1967, 1971, 1977 and 1984 – received vote shares oscillating between 42% and 45%. 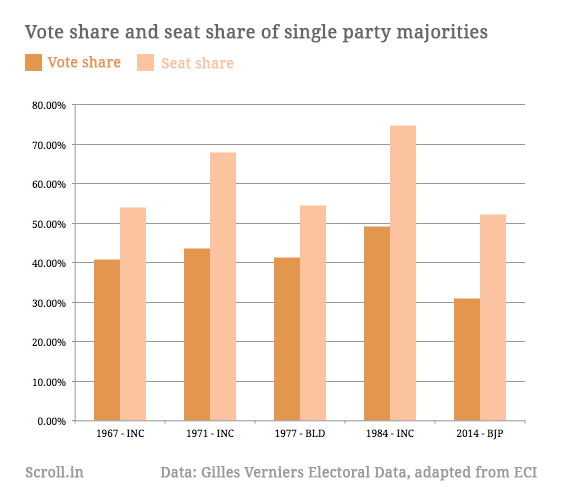 India follows the Westminster model of democracy, from which the First Past the Post system method of electing representatives is a direct byproduct. Today, only eight countries in the world follow this system. Ironically, even Britain is slowly moving past this system, and the British parliament is the only remaining institution to utilise this particular mode of electoral process.

India uses the FPTP system for not only the Lok Sabha elections, but also for the state assembly elections. Hence, since the 1990s, smaller state parties have used this system to replicate the dynamics of the national political situation at the local level.

While it would be curmudgeonly to state that 69% of the public did not want Narendra Modi to become prime minister, it would be at least safe to say that this section certainly did not have the BJP as their top choice to run the country. The Congress ranked second in many of the constituencies and got a national vote share of 19%, but managed to secure a paltry 44 seats. In fact, in the 2009 general election, the vote share of the Congress and the BJP was about 28.5% and 18.8%, which is almost the inverse of their respective vote shares this election. In 2009, the BJP got 116 seats with less votes than the Congress got in 2014.

This discrepancy between vote share and seats was evident in the constituencies of the two key states of Uttar Pradesh and Tamil Nadu. While both the Bahujan Samaj Party and the Dravida Munnetra Kazhagam managed to win more than 20% of the votes in their home states, both the parties failed to win any seats in the Lok Sabha this time. In the Hindi heartland taken together, the BJP bagged nearly 86% of the seats with a 45% vote share.

Historically, the FPTP system has always advantaged the national parties, which are in a position to benefit from the fragmentation and dispersion of votes of regional and smaller parties. The Congress’ dominance in the first decades after Independence relied on the disproportionality effect of the electoral system. Its decline in the 1980s was due to varied factors, but the emergence of a competing national party – the BJP – reduced the strength of the disproportionality effect.

In such a situation, where a major chunk of the votes are getting wasted, is the FPTP system truly reflective of citizens' wishes? In an election marked by communal outbursts, in which the representation of Muslims in the parliament is the lowest ever, and the second party struggling to become even the official opposition, isn’t it time we have a serious debate on the case for moving to a system which actually echoes the people’s choice of candidates? 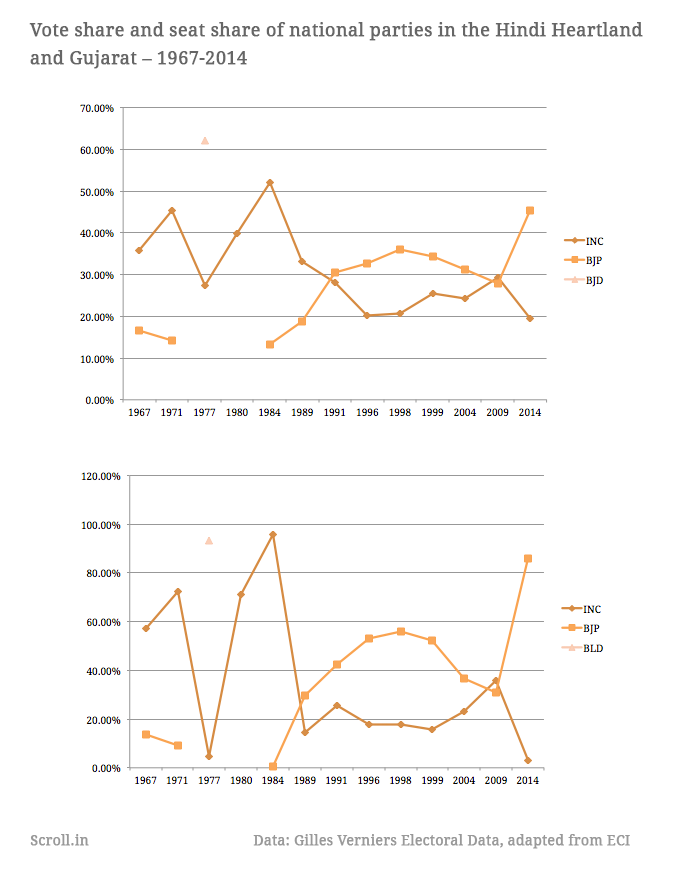 Of the other electoral systems used around the world, the most popular are the Proportional Representation models. These models attempt to equate the vote share and the seat share. If one were to consider the crudest form of Proportional Representation, the number of seats a party gets in the parliament is equal to the total number of seats available (543) divided by the vote share of that respective party. If such a system had been in place in India this year, the BJP would have got 169 seats, the Congress 105, the BSP 23, the Samajwadi Party 19 and the Aam Aadmi Party 12.

Under the German Proportional Representation system, a party must cross a minimum threshold of 5% of the vote share to enter the parliament. The vote share percentages of the parties that cross this level are then scaled up. If this system had been applied to India this year, only the BJP and Congress would make up the Lok Sabha. If we reduce that threshold level to 2%, then parties like the BSP, AAP, SP, the Trinamool Congress and the All India Anna Dravida Munnetra Kazagham would also have seats.

However, these rough estimates could well be flawed. Arguably, people would vote differently if the electoral system was different – that is to say if voters knew that their vote would be highly unlikely to produce a majority.

Furthermore, there is a consensus among parties to maintain the FPTP because though it favors national parties at the national level, it also favors regional parties at the state level. Every party has the chance to get a majority of their own somewhere. It is unlikely that the results of these elections will alter that consensus. After all, even the Congress needs the FPTP if it hopes one day – a distant day indeed – to form a majority on its own.

Ultimately, it is what majorities and their leaders do with the power vested in them that makes electoral system socially and politically acceptable. In the meantime, the party consensus will keep undermining the representation of women and minorities.