Contribute Subscribe
Ad
“Hinduize the politics, militarize the Hindus,” declares a logo used by the Hindu Rashtra Sena, seven of whose members have been arrested for beating a Muslim information technology worker to death in Pune on Monday night.

The attack on 24-year-old Mohsin Sadiq Shaikh, who was returning from prayers at a local mosque, came the day after mobs damaged approximately 190 public buses after rumours that derogatory images of Shiv Sena leader Bal Thackeray had been posted on Facebook and WhatsApp. It isn’t clear whether the Hindu Rashtra Sena members held Shaikh directly responsible for these social media posts.

This isn’t the first time that the Hindu Rashtra Sena has been involved in violence. The police said that the outfit’s leader, Dhananjay Desai, has been named in 23 cases relating to rioting, extortion and other crimes, the Indian Express has reported.

Copies of his incendiary speeches are widely available on YouTube.

In the video below, Desai explains his conception of Hindutva. It is, he declares, “a movement to repel the human animals who have attacked our holy land. To penetrate the evil conspiracy. It is to destroy the green hordes, to smash the Christian conversions. To destroy the caste system.”

He adds, “Hindutva is this fight, this revolution, that the pious sons of Mother India have launched – of nationalism, of the desire to preserve Indian culture, of the rise of the saffron flag. Hindutva is the name of this struggle.”

The Hindu Rashtra Sena first came to public attention in 2007, when some of its members ransacked the offices of Star News in Mumbai to protest the television channel’s coverage of the elopement of a couple in Gujarat belonging to different communities. Last May, the group demonstrated outside the home of film actor Sanjay Dutt, demanding that he be hanged for his role in the Mumbai bomb blasts of 1993.

On one of its two Facebook pages, the Sena declares that Muslims and Christians cannot be truly Indian because “their Holyland is not the Hindusthan but Arabsthan and Rome”. But they could become Indian if “they abandon their faith in antinational religions like Islam and Christianity and also unless they embrace again their original religion from which they were forcibly converted to their present status”.

It adds, “We Hindus should militarize and industrialize ourselves. That is the only key for survival now…In army, navy and airforce, Hindus should have majority. In fact, the people with double faiths should not at all be allowed to enter Indian Military. This is the only way to keep ourselves safe.” 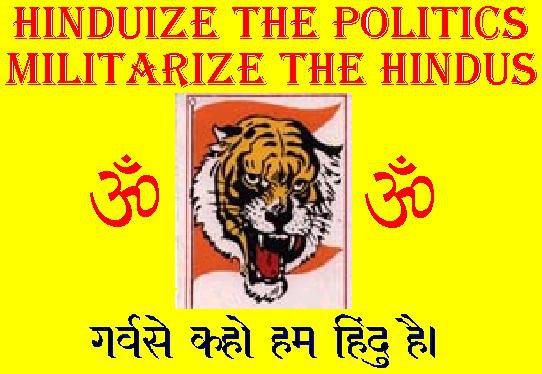 From Savarkar to Modi: What explains Hindu nationalists’ admiration for Israel