Contribute Now
Ad
On Friday afternoon, as a heat wave officially struck Delhi, Raja Burman paced up platform number four at New Delhi railway station, carting the heavy bags of passengers, who, as they alighted from air-conditioned coaches, loudly complained about the unbearable temperatures before dumping their luggage in the arms of the profusely sweating middle-aged porter.

The temperature in Delhi soared to 45 degree Celsius, which, according to the definition used by the Indian Meteorological Department, amounts to a "heat wave".

The city's poor might not have much choice in the matter but working in extreme heat is a grave health risk.

A new study has found that mortality rates in the city of Ahmedabad were 43% higher in May 2010 when the city experienced a heat wave as compared to the same days in 2009 and 2011. An excess of 1,344 deaths occurred in May 2010, relative to the average for the years before and after.

The researchers had accessed the day-wise death counts from Ahmedabad Municipal Corporation, which revealed neither the cause of deaths nor the socio-economic profile of the dead.

Since the cause of the deaths was not known, it could be argued that the excess deaths in May 2010 may not necessarily be related to the heat.

However, the researchers checked the government's epidemic surveillance system to rule out any outbreaks that could have contributed to an increase in mortality rates in 2010 – which implies that, all things the same, more people die in conditions of extreme heat. 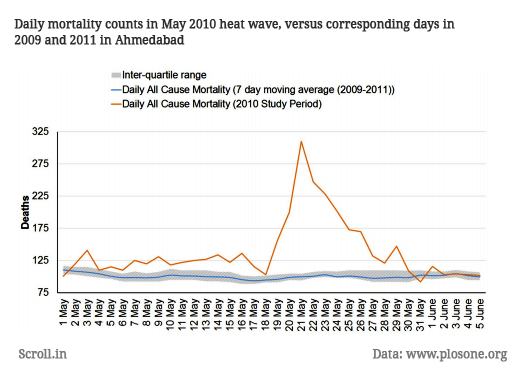 For a country with as brutal a summer as India, heat-related mortality remains poorly documented and understood.

Only deaths by heat stroke and heat exhaustion are counted as heat wave deaths. A report on deaths in Odisha in May said, “According to a statement released by the office of the state’s Special Relief Commissioner (SRC), 87 cases of suspected heat wave deaths had been reported from different districts by Wednesday evening, of which 20 were confirmed as deaths due to sunstroke.”

But the narrow definition of heat wave deaths does not account for the way “heat exposure stresses underlying physiological systems”, as the study on Ahmedabad deaths states.

Heat exposure exacerbates respiratory diseases and renal failure, which might not result in same-day deaths but could show up with a time lag of a few days. A study of heat-related mortality in London, São Paulo and Delhi showed that “the level of risk [of deaths] remained highest for longest in Delhi”.

This is something that the homeless poor of Delhi know intuitively. "Sardi bardaast ho jaati hai, garmi nahi. I can handle the cold but not the heat," said Ram Avtar, a man in his late twenties who pushes hand-carts, works at road construction sites, works as a waiter at weddings – whatever he can to earn his daily meal. On summer nights, he can be found sleeping on the road divider between the lanes of speeding traffic in Kashmere Gate. The traffic may be noisy, he says, but it helps keep away mosquitoes.

While the deaths of homeless people make headlines during the winter months, data for the last two years shows that the deaths of unidentified people on the streets of Delhi peak in the summer. This year, 244 unidentified bodies were found in April, nearly as many as found in January.

Around the world, there is concern over the rise in heat wave conditions. "Under climate change, higher average temperatures, increased summertime temperature variability and more extreme heat events are anticipated to greatly exacerbate the health impacts of heat," said a report prepared by researchers from the Harvard School of Public Health and others. The Intergovernmental Panel for Climate Change, a group of 1,300 independent scientific experts, said, “There is very high confidence that the net effect of human activities since 1750 has been one of warming.”

Increased industrial activity and reduced forest cover, environmentalists say, is leading to a rise in temperatures, which hurts everyone, but most of all, the poor. Ironically, the day the heat wave hit Delhi, newspapers reported that the Ministry of Environment, Forests and Climate Change plans to dilute the forest norms to enable more industrial projects in forest areas.