...A group of border police flagged down my taxi after we passed a large yellow signboard for the Stilwell Road Wetland Park. Policemen sauntered over to surround the car, peered through the car window and asked me to step outside. The roadside security check-post was unmarked. They reacted like it was a while since they had inspected a journalist’s J-category visa. The passport passed clumsily from hand to hand. They asked, repeatedly, which country I hailed from.

Perhaps I was the first Indian journalist to visit Ruili in recent years. A big-bellied policeman perched on a stool quickly gave up the tedious task of copying my passport name in a register. Adjusting a digital camera, he began to photograph my passport on its expired side. I pointed to the valid page. They asked what I was doing on the road to Ruili. A gang of yapping mongrels joined our awkward group. I stood sinking in chocolate-coloured slush, on the verge of introducing myself as a travel writer, when my middle-aged taxi driver intervened all of a sudden with a charming smile and a firm grip on a fake Louis Vuitton bag.

‘She doesn’t understand Mandarin,’ she informed the police in a matronly manner.

Everybody looked relieved. The interrogation came to a grinding halt. I hopped back into the taxi. The woman and I had spent the last hour on the renovated China–Myanmar road, chatting in Mandarin as she complained of rising unemployment and extracted details of my age and Mumbai boyfriend, all of which I made up. We hit the curvaceous two-lane highway once again. I rolled down the window to gulp in pure oxygen compared to choking on smog in Beijing. After a while, she pointed to my left.

From Myanmar to China

Ruili on the frontier of China’s Yunnan province is hemmed on three sides by the mountains of Myanmar … Ruili, a boomtown on a forgotten centuries-old southern Silk Road to the markets of India and South Asia, has become the ground zero of China’s strategic and economic partnership with Myanmar. The historic route is now under a multibillion-dollar building boom of futuristic trans-Asian railroad, highways, oil and gas pipelines merging the borders of China and Myanmar. Myanmar shares a 1,600 km border with India and a 2,000 km border with China. Myanmar is China’s multipurpose and long-faithful neighbour coveted for its energy supply, natural resources and geographic access to India’s unsettled north-east pockets and insurgents-cum-consumers of Chinese arms. Most of all, China woos Myanmar as an ally for its coastline only along the Indian Ocean where China is way ahead of India in developing ports for commerce and potential strategic access ...

Ruili is a slice of Myanmar in China. Its Myanmarese jade traders are also keen to do direct business and trade with India through Yunnan, and in rare candid moments, they expressed concerns about the Chinese domination of their resources and markets. Myanmar plays both the India and China card to suit its interests. India has opened up border trade with Myanmar and launched major India–Myanmar transport projects to promote development in the north-east.

A greater Indian economic engagement with the regime is also necessary to prevent Myanmar from politically leaning completely towards China in return for its massive foreign investments. India’s security establishment is concerned that the Southeast Asian nation could come completely under Beijing’s influence and open ports to PLA warships as refuelling bases and listening posts in case of maritime conflict on the Indian Ocean...

‘Yahaan hamari hukumat hain (I run this place),’ muttered Phone Kyaw as he led me to a black Cadillac. The car was bought a month before in Kunming. It was parked in a puddle.

A grocery stall and DVD bootlegger stood opposite the luxury car in a garbage-strewn ghetto smelling of biryani and damp mongrels. There were several shops in the potholed market alley; their tables were all laden with the precious jade of Myanmar.

‘Yeh America ke Kennedy ki gaadi hain (this is the car of the Kennedys of America),’ explained Kyaw, a highstrung, high-pitched, wiry little man from Yangon with the ebony complexion of uncut rocks displayed haphazardly around us. Kyaw’s ruby-toothed smile was interrupted every few minutes to squirt betel juice into a pail in his open-fronted shop.

A burly, bald bodybuilder, or so he seemed at first glance, was squeezed into the driver’s seat. He was the Myanmarese merchant’s Chinese driver and I imagined him as the perfect bouncer for a rowdy Ruili disco. The Cadillac was produced before me with a flourish after Kyaw noticed my appreciating glances at another Chinese man’s Porsche gliding into the narrow jewellery bazaar earlier that day.

‘Hamare paas bhi hain (we also have one),’ the don had pouted, disappearing to arrange gaadi driver.

Twenty years back, Kyaw had fled from autocratic Yangon to Ruili, a place he described as a ‘jungle’ in those days. He set up shop on a table. It has expanded into a store with its own warehouse stacked floor-to-ceiling with black chunks of Myanmar’s mountains. Kyaw’s stature grew as he forged connections with the local government. Everybody knew him. I found him by asking random jade traders for his address.

Follow me, said a man in shirt and longyi. The men looked indistinguishable in lanes full of longyis. The one I followed got lost. There was a tap on the shoulder. Another man with a toothy smile started to lead us...Darting through back alleys, we reached the open-fronted shop where the president of the Myanmar Gems Traders Group sat with his wife wearing a cotton nightgown and whitening sandalwood paste on her face. A Chinese hawker peddled past on a tricycle, howling doufu (tofu). Next to Kyaw sat a wizened man with a white beard who asked the question on every Myanmarese’s lips in Ruili: ‘Are you Hindu or Muslim?’

‘When jade comes from Myanmar, it is all black,’ Kyaw said, referring to payouts to members of the military regime and ethnic rebels as it is smuggled on conflict-ridden roads in his unstable country. ‘In China, it becomes white.’

He estimated that the Myanmarese society in Ruili grew from less than 500 two decades ago to over 40,000 today, during which period his business expanded to three shops. After living in Ruili for twenty years, he did not own a passport to travel beyond Yunnan and sell his gems directly to the world. The Chinese gave him a special permit that localizes the influx of refugees.

The permit is renewed ‘in five minutes’ every three months, but confines him to Yunnan. Over 60,000 Chinese exporters have migrated from neighbouring provinces to Ruili, said a wealthy Chinese jade seller who migrated here from Fujian. They buy jade for a bargain, carve finished products using the technological skills and funds that the Myanmarese lack and export them to the US and the world. In an indirect way, the process evaded international sanctions on Myanmarese products.

The immigrants also trade in truckloads of timber lumbering across the border. Myanmar is actually the mainstay of the Chinese economy in Ruili. Biryani and samosas, not dumplings, are staple snacks. Myanmarese storefronts line the streets and Myanmarese restaurants are packed with Chinese customers. A uniformed Chinese policeman stopped to greet Kyaw effusively as we walked towards a Myanmarese eatery for curry and rice.

Myanmar leans on China in return for investments in ports, highways, railroad, bridges, dams and a 2,520 km natural gas pipeline that was completed in 2013 to supply energy from Myanmar through Ruili to Yunnan and the Chinese provinces of Guangxi and Guizhou. The Chinese have poured over $3 billion into a controversial hydroelectric dam project in Myanmar (it was suspended under local pressure since 2011) that was designed to generate power mainly for China.

India was Myanmar’s largest trading partner until the 1960s but it has slipped behind Thailand, China, Hong Kong and Singapore. In a few years, Chinese trains will cruise at 200 km/h from Yunnan to Yangon (1,920 km), the largest city in Myanmar. There are plans to build a railway network from Kunming in Yunnan all the way to Laos, Cambodia, Vietnam, Thailand, Malaysia and Singapore. By 2015–16, India hopes to complete its challenging Kaladan Multimodal Transport Project.

Envisaged as a major road and waterway to connect eastern India to Myanmar through the port in Sittwe, capital of the Rakhine state by the Bay of Bengal, it will serve as an alternative to the congested Siliguri corridor in West Bengal which is the only link between the north-eastern states and the rest of India. Meanwhile, the journey from Mandalay to Ruili has reduced from a day-long trip to a few hours’ drive.

‘We’re obliged to the Chinese government, so we obey their laws,’ said Kyaw. ‘Don’t write anything negative in your book, otherwise we’ll face a problem. Ruili mein khana, peena, sona, sab achchha. (In Ruili, food, drink and sleep -- all are good).’

The Cadillac driver peppered me with questions. ‘What is this Mumbai? Does it have tall buildings?’

He was clueless about the location of a famed Buddhist temple in town. The tour he planned for me showed off Ruili’s prosperous side of newly built villas on former rice fields, jade and timber markets and unguarded open borders where we stopped to stare at apartments, sundry stores, tea and newspaper stalls a hop, skip and jump away in Myanmar.

People on the other side paid us no attention. In the end, he parked at a kerb and pointed across the Ruili River. Speaking Mandarin, I exclaimed at the beauty of the mountains, unaware they rose out of Myanmar. ‘China’s mountains are also beautiful,’ he promptly added, gesturing to the rear window.

I stepped out and took a good look at the riverside as instructed. He scanned my expression expectantly. Across the water, the Chinese side was lined with neat rows of new villas. On the Myanmar side, there was barren land.

Excerpted from ‘Strangers across the Border‘, by Reshma Patil, who was in China from 2008-2011 as a foreign correspondent. A combination of reportage, commentary and travel writing, the book describes Chinese perceptions of India. Published by HarperCollins India, it is scheduled to be in stores in July. 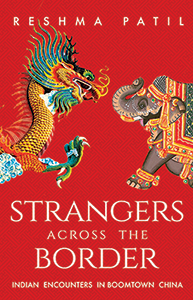