In 1868, when coastal Karnataka was still called Canara, Alex Albuquerque Pai, the son of a farmer near Mangalore, decided he wanted to break with tradition.

Giving up agriculture, he set up A Albuquerque and Sons, the first tile factory in the region to be started by an Indian. Today, it is also the oldest surviving tile factory in Mangalore.

Three years before this, a group of missionaries from Basel in Switzerland had discovered extensive clay deposits along the Gurupura and Netravati rivers near Mangalore. They established the first tile factory in India soon afterwards. Pai learned the trade from them.

Over the years, other Indians also set up tile factories in the region and Mangalore tiles soon became well-known across the country.

“Mangalore has the best kind of clay available,” said George Albuquerque Pai, great-grandson of Alex, over the phone. “It is sticky and meant to make tiles and bricks.”

Albuquerque was travelling while we were in Mangalore, but he allowed us to visit the factory in his absence. He has been working with the company since he graduated from college in 1971 and his two sons are eager to join the business. 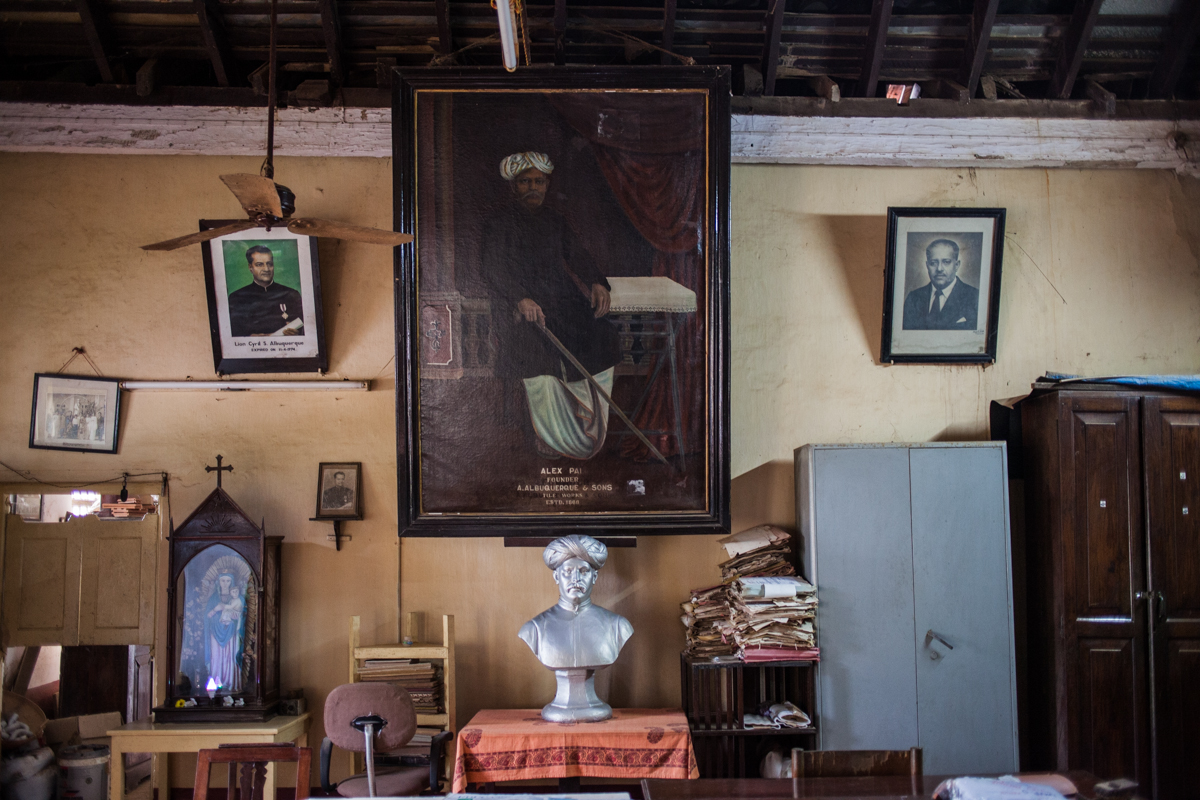 Mangalore tiles were once used everywhere. Well before 1947, the government bought most tiles for its buildings from Mangalore because of their durability and ability to keep out heavy rain. The tiles’ shape and the way they interlock help them keep the rain away. They are also not porous.

The roof of the Victoria Terminus in Mumbai, for example, still has Mangalore tiles placed more than a century ago, although battered by the years.

The demand for tiles used to be seasonal. “Earlier we would depend on the rains because the farmers would earn some extra money around then,” said Albuquerque. “If there is a good monsoon, they might decide to build a house for their daughter, or make an extension to their house, add a room. All of this requires tiling.”

“For poorer people, roof tiles are the best material to keep away heavy rain,” he continued. “Clay tiles keep out the heat and the rain and they last for years."

Over the years, as government preferences changed and the cement and asbestos industries grew, fewer and fewer tenders for new buildings specified that they must have Mangalore tiles in their roofs.

"Now when the government has housing schemes for the poor, they put cement and asbestos tiles on top, which just increases the heat," said Albuquerque.

Many factories have shut down as a result. There were once as many as 35 factories in Dakshina Kannada district, but only about ten now function.

Production in the existing factories has also fallen ever since government orders began to dry up. Albuquerque said that in a given year, they might make 30 or 40 lakh tiles, down from 100 lakh in the 1970s. 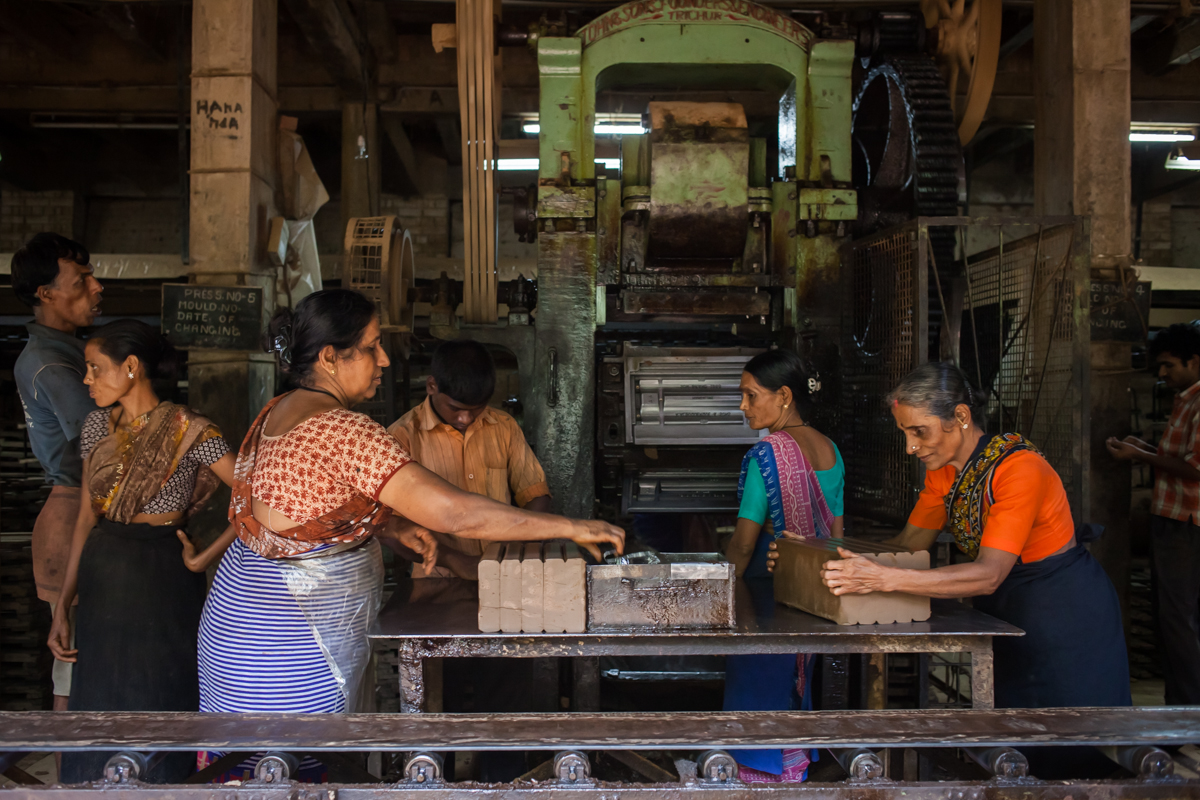 Joseph D’Souza, a supervisor, took us around the factory. He is 52 years old and has been working there in a management position since he was 17.

While many workers said that they had been doing the same job since they joined, Albuquerque said that those who showed promise were promoted to tasks that required more skills.

The factory now has about 60 to 70 workers, most of them Tuluvas and Kannadigas from the area and a few north Indians.

Mabel D'Silva, a Tuluva who used to be a domestic worker in Chennai, spoke in broken Tamil. Her mother also worked in that house. Mabel returned to Mangalore after she got married.

The two-storeyed building hummed with the persistent clacking of conveyor belts as workers loaded slabs of clays into presses. The tiles travel across the floor, where they are manually packed into heated kilns by people who work there for several hours at a stretch.

A large fan at the entrance of the kiln is the only relief from the heat. Once a kiln is full, it is sealed with bricks and the oven is lit. After the tiles are baked, they are cooled, removed and placed once more on the conveyor belt, which takes them one storey above to a ghostly row of shelves, where they are stored until sold. 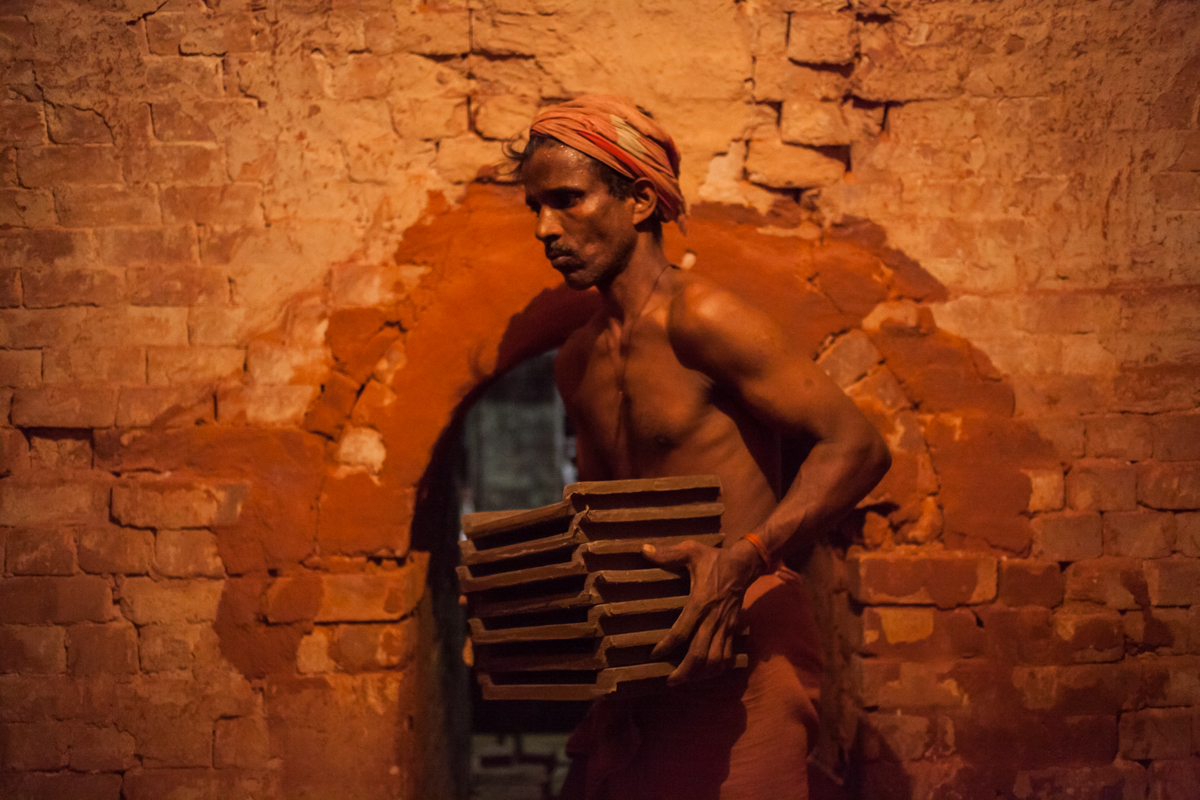 Joseph Montero works in the kiln for much of the day. Photo credit: Harsha Vadlamani

Until the mid-80s, employees manually pressed tiles into shape with around 22 hand presses available at the factory. Albuquerque employed around 400 people at the warehouse at that time.

But between 1986 and 1987, Albuquerque mechanised much of the factory with machines from across the country, including from Kozhikode. This, he said, helped him survive a slump in the early 2000s, when ten factories closed down in quick succession because they were unable to expand without investment or invest without expansion.

But it also makes life much easier for employees, said the workers. Sixty-year-old Sundara Gujari has been working at A Albuquerque and Sons for ten years. He worked at another tile factory nearby before that.

His duty for the past ten years has been to lift tiles from a conveyor belt as it passes his station and to stack them in long shelves for later transport.

“The belt makes it easier for me to lift things,” he said. “Otherwise, I would not be able to work for so long.”

Abu Zafar, an 18-year-old from Bihar, agreed. He used to work as a cement mixer at construction sites in his home state before he decided to apply for work here.

“You think this work is difficult?” he asked, amused at my question. “This is the easiest job I’ve ever had. They give us food, water, a place to stay.”

At some point, he said, he would consider returning home, where agricultural work awaits him, but not right away. He keeps Rs 1,000 of his monthly salary of Rs 7,000 and sends the rest home.

“These tiles last for more than 100 years,” said Albuquerque. “Look at Mohenjodaro and Harappa. See what survived from there. They found a lot of clay bricks, tiles, sculptures. Once the fire burns the clay to a certain temperature, nothing happens to it.”

In one of India's wettest places, researchers chase and find new species of snakes in the wild