In May 1993, Bernard de Souza, a fisherman in Panaji in Goa took three boats and sailed around the peninsula to Vishakhapatnam on the east coast.

The monsoon was around the corner, and for three months fishing along the west coast would come to a halt because of rough weather. That year, de Souza decided to head to the east coast to see if he could fish there.

At that time fishermen rarely risked crossing from one coast to another, but de Souza undertook the voyage because he had just upgraded his family’s traditional fishing boats to mechanised ones.

“It is too far to sail in traditional rowing boats,” said de Souza, now 72 years old. “There were navigation problems too because you need to know the routes, where the rocks are. Night sailing was also hazardous. At that time, there was no GPS.”

De Souza took his time, stopping at Kochi, Tuticorin, Chennai and Kakinada on the way. When he arrived in Vishakhapatnam five days later, he rented a house at a beach.

He got a hostile reception from the local fishing community, whose members resented an outsider in their midst. They began to spread rumours saying that 200 more boats were coming from Goa to deplete their grounds.

But de Souza's luck turned because of his background in traditional fishing.

“The dada (ring leader) was a person called Kannaya,” said de Souza. “He happened to have a cast net under his house and I began to examine it.” A cast net is a circular fishing net with weights along its edge.

Neither knew the other’s language, but Kannaya saw de Souza looking at his net and asked him if he knew how to throw it. De Souza cast the net perfectly. Few others knew how to do this and so Kannaya realised that de Souza was a true fisherman.

“Kannaya was so excited that the next morning he shouted to everyone and told them, ‘Mr de Souza will stay!’”

De Souza fished in Vishakhapatnam for six months, becoming close friends with Kannaya. He returned to Goa just before the Bay of Bengal became too risky to navigate after the northeast monsoon arrived.

“There is no other profession that [creates] such an affinity between people,” he said. “When two people of the same profession meet, there is some connection. But a fisherman’s life is so risky that only another fisherman can possibly understand it. For every day on shore, we spend six at sea, so you have to trust the people around you with your life.”

He probably would not be able to do now what he did then. These days, fishing boats can sell fish only at the jetty at which they are registered, which would have disqualified de Souza from selling his catch in Vishakhapatnam. 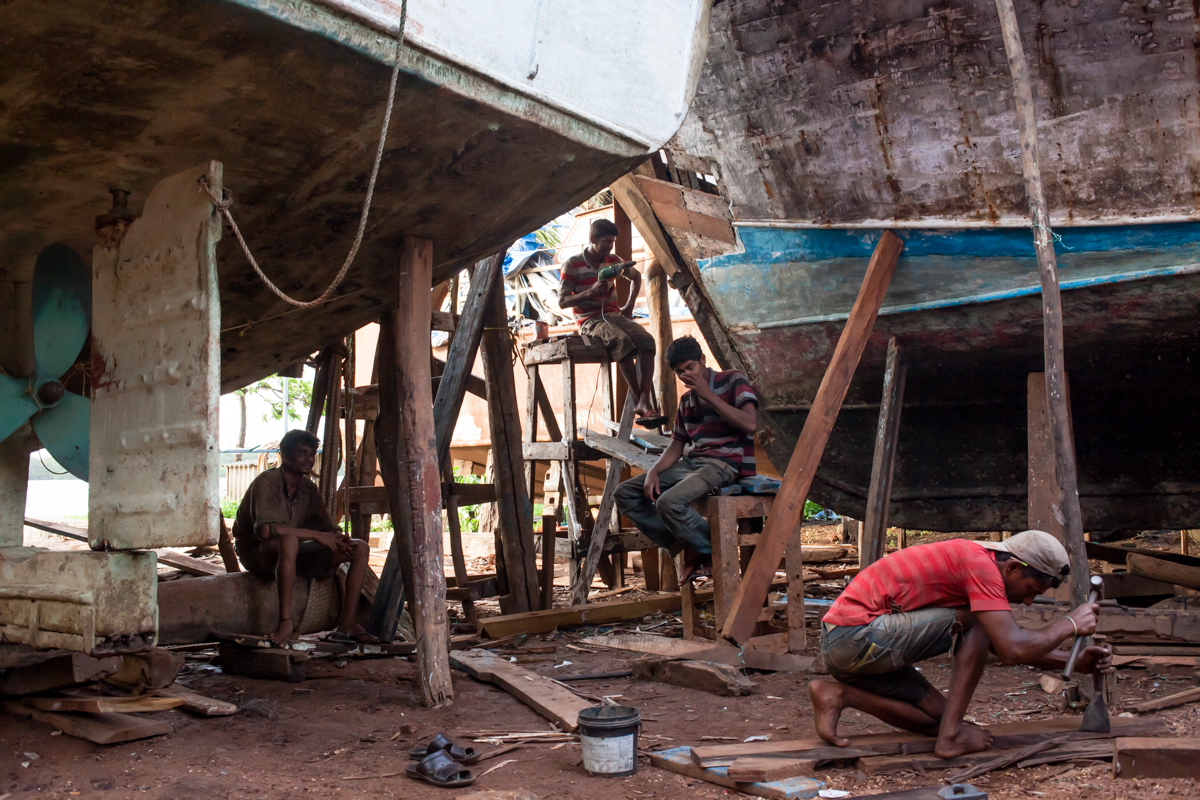 Bernard de Souza went east during the monsoon all those years ago because this season is a lull for fishing. It is dangerous to fish during this season.

In Goa, most boat crews consist of about 25 people, most of whom are migrants from northern and eastern India, while the captains and their deputies are invariably locals. During the monsoon lull, the outsiders return home. By the time we arrived, they had all left.

When some workers in the fishing industry look for other jobs during these three months, others get more work. Workers in shipyards, for instance, receive more boats in need of servicing or repair after months of being tossed around on the high seas.

De Souza directed us to Pentagon Engineers, a yard he used to run until he retired. Purse seine (nets that hang vertically in the water pulled down by weights) and trawling boats, all in various states of disrepair, filled this yard in Old Goa. One boat had a side missing, another needed a giant propeller installed and a third had cracks that were being stuffed with cotton wool to prevent further leakage.

In the blistering heat that preceded this monsoon, several workers at the yard threw in their towels. At the end of May, they left the boats half repaired and dispersed to their hometowns along coastal Karnataka. The workers had come to Goa from their native towns on June 15, expecting the monsoon to have arrived. It hadn't and the intense heat had not receded.

“It was too hot for them,” said John Dias, a supervisor at the yard, where around 40 fishing trawlers were being repaired.

But some stayed. Ten workers from Bhatkal in Karnataka were refitting the hull of one trawler from scratch. They said it would take three months to repair.

“We are all from the same place and we came here together,” said Manjunath Achari. “This is my father-in-law,” he said, pointing to the man next to him. “I brought him here."

Until six years ago, Achari used to work as an attendant at the Karnataka agriculture department. “I did not like being an attendant," he said.

The two men then turned and hoisted a large plank above their heads and on to the ship.
Support our journalism by subscribing to Scroll+. We welcome your comments at letters@scroll.in.

Goa's feast of São João has wild flowers, feni – and jumping into wells