Contribute Now
Ad
Between 2001 and 2011, the Indian economy grew at an average rate of 7.4% a year, bringing in its wake increasing prosperity, jobs, and a surge in migration from villages and towns to cities.

The theory was that the demographic shift would create more nuclear families, typically defined as a household with a single married couple, living alone or with their kids, rather than the generational “joint family” households that are more common in rural areas.

“The decline in nuclear family is against the expected direction,” says TV Sekher, a professor at the International Institute of Population Studies in Mumbai. 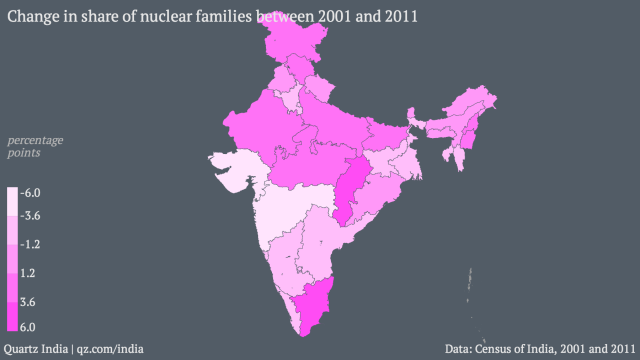 In another surprise, the share of nuclear families has declined by 1.84 percentage points in urban areas, but grown by 0.32 percentage points in rural areas. TV Sekher puts it down to pressures of urban infrastructure and urban jobs. “In urban areas, with scarcity of housing, there is a tendency of families to stay together,” he says. “Also, increasingly, we see a new kind of nuclear family, where both the wife and the husband are working. So, they don’t mind having one of their parents living with them to balance taking care of children and work.”

Besides such work-related arrangements, the decline in nuclear families can also be attributed to social changes. India is seeing a rising number of cases of divorce and separation, single parents, and people marrying late or opting to stay single.

In this context, the only data point the Census gives for both periods is the number of one-member households – a proxy for people living alone. Between 2001 and 2011, this number has grown from 6.8 million to 9.04 million. That’s an increase of 33%, which is greater than the rate of population growth (28.2%) or the increase in the number of nuclear families during this period (27.4%).

Nuclear families have been consistently declining in developed economies. In the US, for example, the share of households that comprised married couples with children has dropped from 40% in 1970 to 19% in 2013. In that sense, Indian society might be beginning the third arc in the fragmentation of the family unit: from joint families to nuclear families to disparate set-ups.