Become a Member
Ad
IndiGo emerged as the best Indian airline in terms of reliability and punctuality, according to data released last month by  Flightstats.com, based on the top 20 domestic routes per airline between May 15 and July 15.

IndiGo tops in all three parameters that the website used to evaluate the airlines: the percentage of flights that were on time, the average delay and the number of flights diverted or cancelled.

The airline has many satisfied customers on Twitter. “On time (never failed me), decent food, fun branding, great service," tweeted @SpinAndSwirl on July 29. 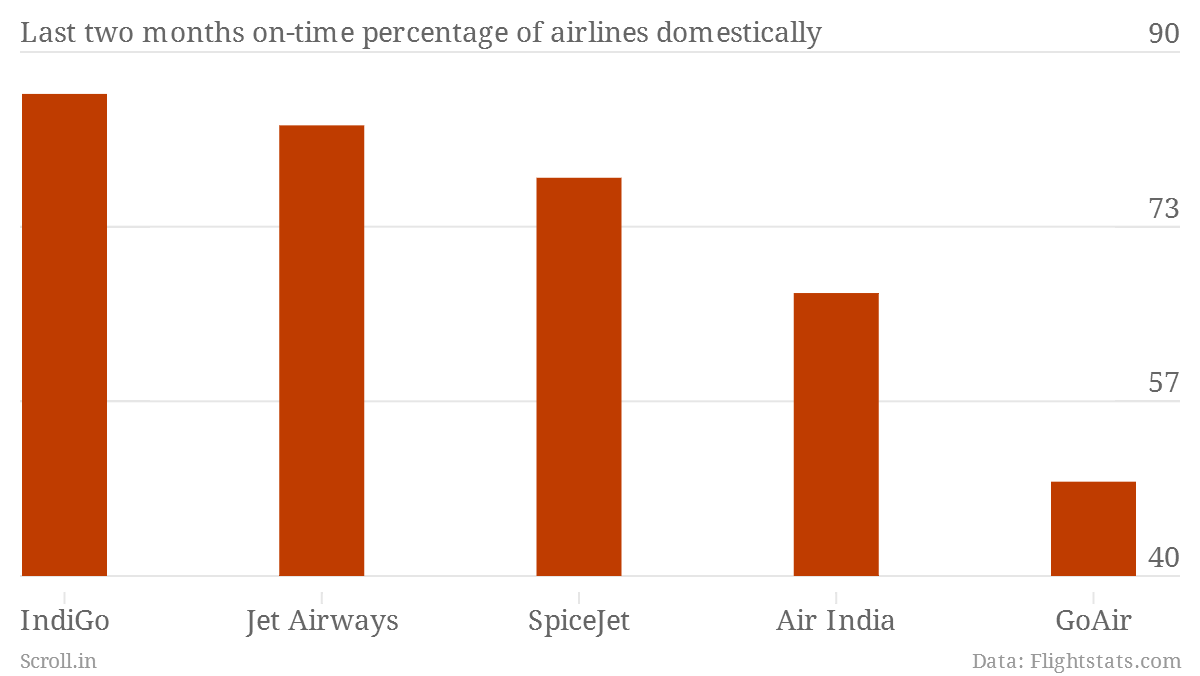 SpiceJet comes last on two parameters and in the middle in the third, as seen in the charts above. The Directorate General of Civil Aviation asked the airline on July 28 to refund the full fares and Rs 15,000 worth of food and drinks it sold to passengers when one of its flights was delayed by almost five hours.

The airline regulator took what is perhaps an unprecedented step, of penalising an airline by asking it to pay such a heavy fine, after receiving a complaint from passenger Harsh Surana. SpiceJet made passengers of a flight from Mumbai to Delhi on June 16 wait for nearly four hours after landing to deliver their luggage.

State-owned Air India fell in the middle, which means that it is doing better in the domestic market than internationally, where it appears to have several problems. (See a Scroll.in report.)

Indigo had the largest market share, at 31.6% in June, while SpiceJet became the second-largest airline, with a 19% of the market share, sharing the spot with Air India, according to data released by the DGCA in July. Jet Airways, meanwhile, shrunk to its lowest market share of 15%.

SpiceJet was able to grow by offering frequent discounts on fares, which seem to be the most important criterion for passengers while choosing a flight.

In the coming months, these market shares will come under threat with increased competition. Air Asia launched in June, and the government has approved the entry of six more airlines: Air One, Premier Air, Zexus Air, Turbo Megha, Air Carnival and Zav Airways and a Tata-Singapore Airlines joint venture.

Most of these airlines are expected to start operations by the end of March, while the Tata-Singapore venture could begin by the end of the calendar year, according to reports.