Contribute Now
Ad
India is a vast country. In increasing order of granularity, it is broken into states, districts, sub-districts and villages/wards. There’s agreement among the country’s official data gatherers on the first geographical level: the number of states India has. But drill down to the second level – districts – and you will encounter a conundrum that is the nightmare of every person using data to do a meaningful analysis.

The answer to the question of how many districts India has depends on who you put this question to. The latest decadal Census, done in 2011, carves out India into 640 districts. But the country’s central bank, the Reserve Bank of India, counts 644 districts. The state-level Planning Commission bodies, which perform the crucial task of collecting development indictors, stop at 556 districts.

The disparity in the district count presents a problem to those looking at numbers to gauge the health and progress of India at this basic geographical unit. Since none of the three government agencies listed above chronicle data on all parameters, for research and policy decisions, cross-comparison of data – Census with RBI and state-level numbers – becomes crucial.

However, it’s difficult to do an accurate comparison. It’s a limitation the government agencies themselves acknowledge in some of their analysis. A January 2014 RBI report titled ‘Comprehensive Financial Services for Small Businesses and Low Income Households’ says that uneven availability of district-level data caused “some of the newer districts to be excluded due to non-availability of data”.

The lack of uniform district-wise data makes it difficult to paint an accurate picture at any given point in time. Over a period of time, the complexity of doing a comparison increases manifold, as an October 2009 paper by two Delhi-based economists, Hemanshu Kumar and Rohini Somanathan, shows.

Kumar and Somanathan mapped India’s districts across three decades using Census data (1971, 1981 and 1991). They found that only 38% of 356 districts in 1971 were unaffected by boundary changes. Of the ones that changed, 79 were “clearly partitioned into multiple districts” and the remaining 141 districts experienced “complex changes”.

The increase in the number of districts is mainly driven by population growth, which has more than doubled in India in the 40-year period between 1971 and 2011 – from 548 million to 1,210 million (or 1.2 billion). Bifurcation of districts is seen as a solution to manage this growth and also to give identity to new commercial centers. 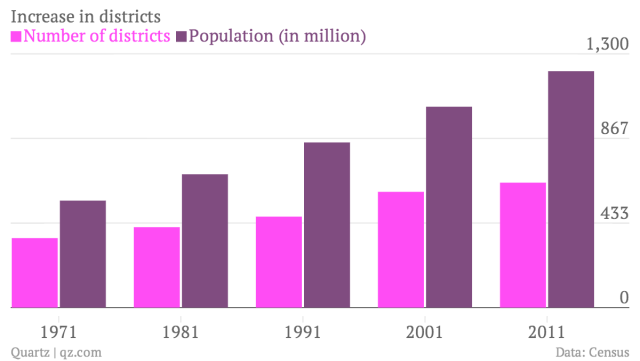 For example, Tiruppur, one of India’s largest garment exporter towns, emerged as a commercial hub in the last 20 years, rivalling Coimbatore, which had a strong industrial base. This led to its demand for bifurcation from Coimbatore, and was granted in 2009.

So in Census 2001 data, Tiruppur formed part of Coimbatore. But in 2011, it is shown as a separate district. A researcher doing a comparison over a period of time has to carefully identify which sub-districts, villages and wards now form part of Tiruppur to come up with a meaningful analysis. Such bifurcation can be easily mapped in some instances and not so easily in others. 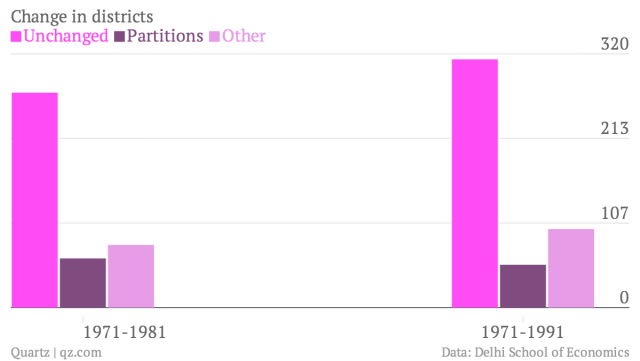 But today, government agencies in India are compounding the problem. One agency factors in such a bifurcation, another does not. A solution to this problem is to force government agencies to harmonize the number of districts so that data can be truly comparable.