Contribute Now
Ad
A new study by the Centre of Science of Environment claims that petrol pumps are a source of toxic benzene emissions that make it one of the most lethal contributors to Delhi’s great air pollution problem. The report, released by Anumita Roychowdhury, executive director at the CSE, says that this makes people who live within a half-kilometer radius of the petrol pump vulnerable to a number of serious health hazards. Delhi currently has 398 petrol pumps.

The report confirms the popular belief that vehicular pollution is a concern, but argues that sources like filling stations and diesel generators pose a greater danger.

Benzene, an important component of crude oil and petrol, is harmful to humans even at minimal levels. In Delhi, the standard level of benzene should be under 5 μg/m3 (microgram per cubic metre). The report says that it has reached over 50 μg/m3 in certain areas in the city.

“Countries like the United States have had the stage-I [vapour recovery] system for years and have now graduated to stage-II,” Roychowdhury added. “However, here we are, yet to acknowledge the fact that petrol emissions are an immediate threat.”

Highest when the temperature is lower

It’s not like government bodies are unaware of the problem. In fact they’ve studied aspects of it themselves. According to a report by the Delhi government’s Centre for Occupational and Environmental Health, benzene levels are highest when the temperature is lower.

This means the air is deadliest in the early hours of the day and the late hours of the evening, which unfortunately coincides with the times that residents of this hot city, children and adults both, choose to get some fresh air.

“The level of benzene rises after sunset and peaks during the wee hours of the morning, between 4am and 6am,” said TK Joshi, director-projects at the Government’s Centre for Occupational and Environmental Health. “That is precisely the time when people go for walk or a jog. The effect of this pollutant is lethal as it mixes with your blood as you inhale. People with a weak immune system are at the greatest risk.”

The capital is short of electricity, especially during the summer months, when demand spikes. This results in a profusion of diesel generators, in homes, but especially in small and medium industrial and commercial units. Experts claim that emissions from these generators release a great amount of carbon monoxide into the atmosphere.

In addition, they release air pollutants like particulate matter, nitrogen oxides and hydrocarbons.

Vehicles are a major source of air pollution, but in India it is not only the increasing numbers but the outdated technology used in engines that is lethal. In India, Euro IV is the latest technology for car engines, but that is still 10 years behind the technology used in the United States and Europe

The most polluted city in the world

In May, a World Health Organisation study stated that the Indian Capital had overtaken the Chinese capital on a most unfortunate metric: its level of pollution. Delhi is now the most polluted city in the world, with an annual average of 153 micrograms of small particulates, known as PM 2.5. The study was conducted across 1,600 cities worldwide. 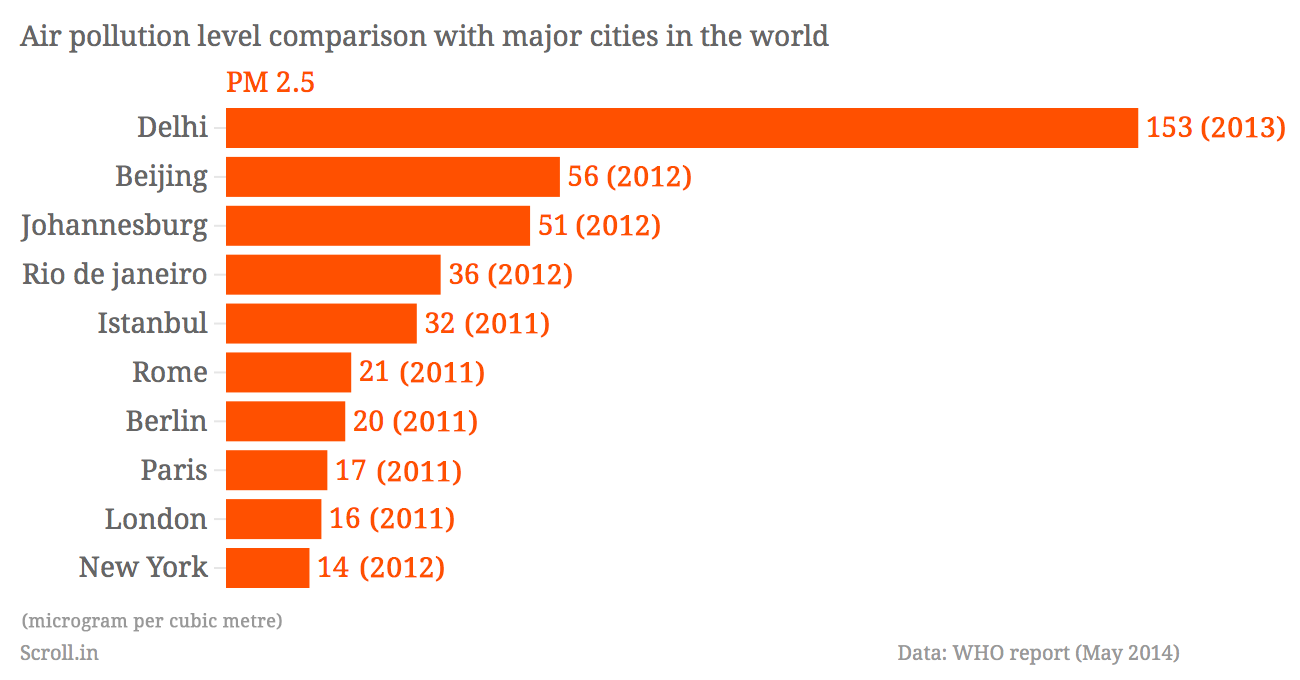 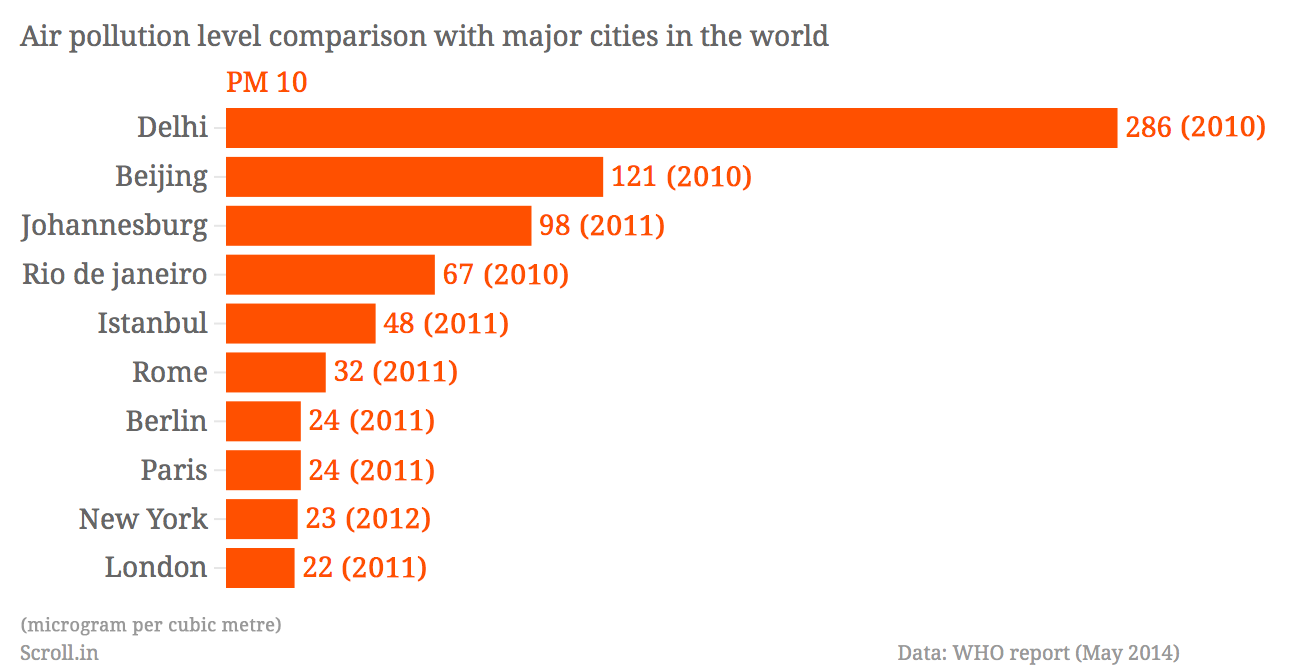 An Indian Institute of Technology study in partnership with the University of Minnesota and University of Colorado revealed that, since 1991 there had been a 100% increase in deaths in Delhi due to cardiovascular and respiratory diseases and hospital admissions for chronic obstructive pulmonary diseases linked to pollution.

“The figures have drastically shot up in the last decade,” one of the experts who conducted the study at IIT Roorkee, Professor Bhola Ram Gurjar said. “In 2010 the total mortality cases went up to 18,229.”

Figures tell only part of the tale. 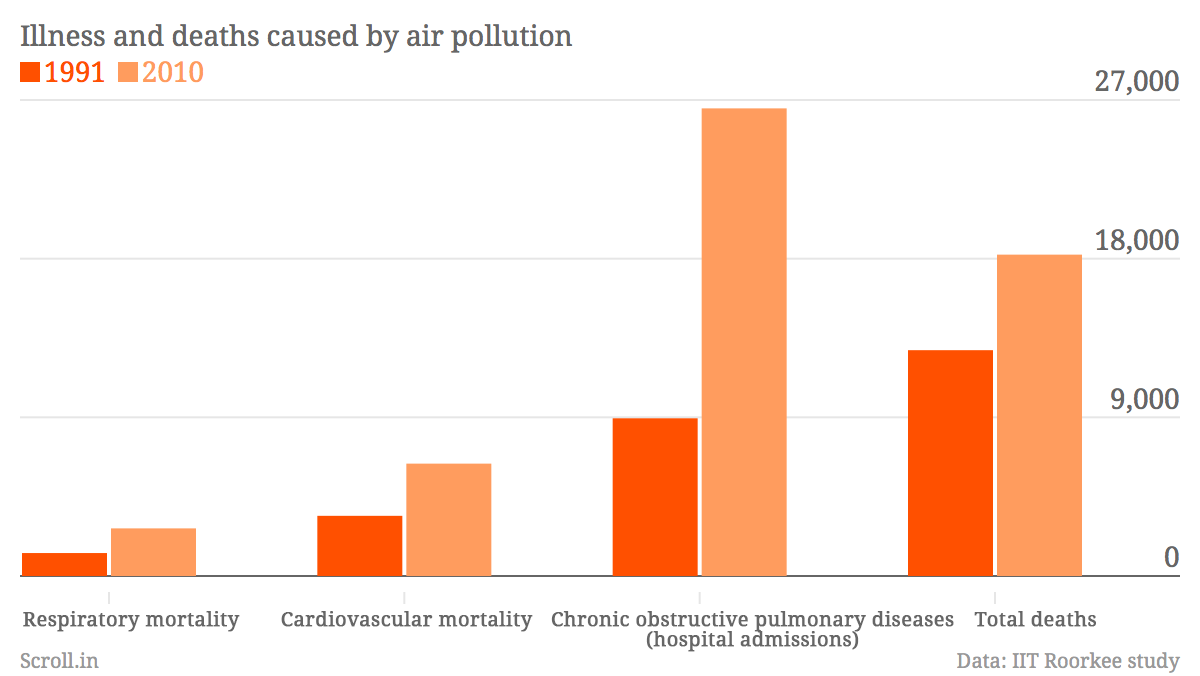