Inaugurated in 2012, this was Narendra Modi’s pet project as the chief minister of Gujarat. Now, as the prime minister, he is using the beautified riverfront – with its 10-km promenade, green lawns, speed boats and shimmering lights – to lure Chinese investment for Indian infrastructure development.

The message that Modi wants to send is clear: India is just as capable as China or any Western country of building "world-class" cities with grand signatures of their upward mobility. The Sabarmati Riverfront also has the dubious distinction of displacing large numbers of slum-dwellers, but Xi is likely to be impressed by the spectacle anyway. China, after all, has followed a similar model of ruthless displacement to rebuild its own cities.

This model, as was the case with the Sabarmati Riverfront project, involves clearing out the urban poor to create facilities that typically benefit only middle- and upper-class citizens. The main difference, perhaps, is that the poor in China are not allowed to fight for their rights in court, while many of the riverside slum-dwellers in Ahmedabad are still fighting for justice in the Gujarat High Court.

The Riverfront project initiated in 1997-'98 by the Ahmedabad Municipal Corporation envisioned reclaiming 11 km of space along the Sabarmati banks to create parks, promenades, cultural facilities, roadways and give a boost to residential and commercial infrastructure. According to a research paper by Navdeep Mathur, a policy expert at IIM-Ahmedabad, one of the underlying facets of the project was to clear the many slum settlements along the river in order to enhance the image of the city.

Between 1999 and 2002, the Ahmedabad Municipal Corporation hired a Mumbai-based firm to survey the slums along 9 km of the river. While the purpose of the survey or the plans for waterfront development were never discussed with riverfront residents, the survey identified around 8,500 slum families that would be displaced, and advised that they should be resettled by the riverfront itself.

Over the next nine years, nearly 12,000 slum residents were evicted and relocated – but their new homes were created far away from the river, in areas that lacked access to basic sanitation, health and education facilities, and in a manner that led to communal segregation.

“Today, the displaced families are 7-15 km away from their former homes, which has disrupted many of their livelihoods and is forcing them to pay much more for transportation,” said Renu Desai, the coordinator of the Centre for Urban Equity at Ahmedabad’s CEPT University. Desai spent eight years researching the displacement and rehabilitation of riverfront residents and has written a paper examining the politics and injustice underlying the project.

In 2011, the Ahmedabad Municipal Corporation won an award from the Union Minister of Urban Development for being the “best city in the implementation of Basic Services to the Urban Poor”, a central government scheme that funded most of the resettlement of the Sabarmati project-affected people. The Riverfront project also won a 2012 award from the Minister of Housing and Urban Poverty Alleviation for “Initiatives in Social Housing”.

“The basis of giving these awards to the project is very unclear,” said Desai. “The project-affected people have not even been treated as humans with basic needs.”

In 2005, a forum of riverfront slum-dwellers called the Sabarmati Nagrik Adhikar Manch filed a public interest litigation in the Gujarat High Court, petitioning for their right to equality, livelihood and shelter. They wanted the court to ensure that they were not evicted without notice and were given alternate accommodation that would be conducive to their many informal livelihoods.

The court, in a seemingly sympathetic move, put a stay on evictions and asked the Ahmedabad Municipal Corporation to submit a policy for resettlement. “But the stay order was narrowly framed and did not ensure justice, because it allowed construction for the riverfront project to continue, and did not impose a deadline for submitting the policy,” said Desai.

By the time the rehabilitation policy was submitted in 2008, the authorities had already evicted a number of settlements that were in the way of ongoing construction. “The policy itself was ambiguous, and did not specify who would be eligible for resettlement or how the relocation would be carried out,” said Desai.

From 2008 to 2011, the authorities carried out evictions – with the permission of the court – in four phases. But most of the time, the residents were forced to move into incomplete transit homes, far away from the river, even though the original plan had been to relocate them close to the Sabarmati. Families that were deemed ineligible for resettlement were bulldozed out of the area. Several residents are still fighting for just rehabilitation in the High Court.

One of the biggest fallouts, however, has been the breaking up of different riverfront settlements on communal lines. While many of the slums along the river had a mix of Hindu, Muslim and Dalit families, the upheaval of relocation in a post-2002 Ahmedabad led most of them to ask for accommodation with their own communities.

These faultlines, however, would have been invisible along the lamp-lit Sabarmati Riverfront when Modi showed it off to the Chinese president. The resettled slum-dwellers, after all, have been moved far away. 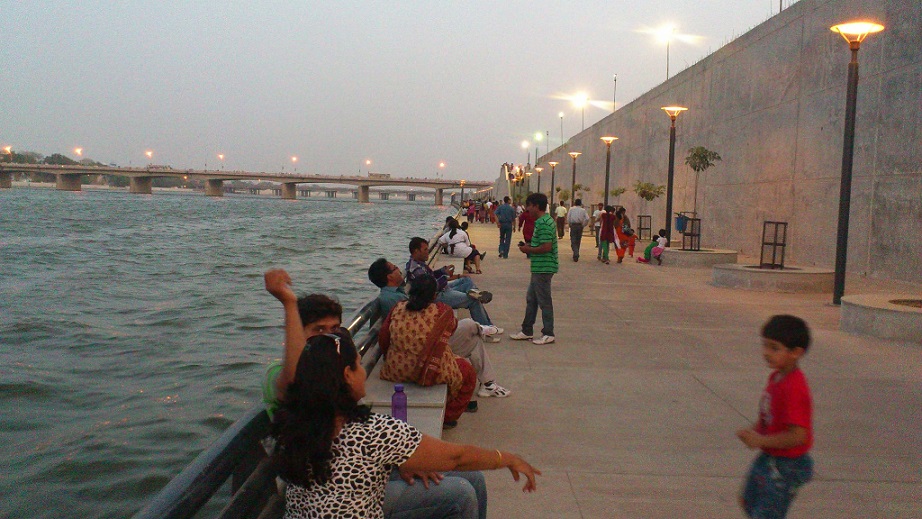